Lark or And Your Bird Can Brunch

Aristotle had Plato.  Sherlock had Mycroft.  Luke had Yoda.  Brandy has Belvedere, 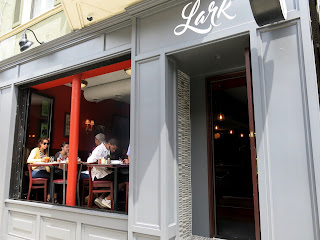 Yes indeed, there is one person in this world who might know more about brunch than Brandy and that person goes by the singular name of Belvedere.  Brandy met Belvedere one chilly autumn evening at an experimental theater performance in the basement of a cracker factory.  The doom and gloom of the absurdist piece wasn't quite as effective as its director had hoped due to the pervasive smell of butter in the air, which had given Brandy a case of the giggles throughout the performance.  Belvedere, there to review the show for a major publication, was quite taken with the irreverent girl and offered to take her out to brunch the following morning, and Brandy, intrigued by the tuxedoed man who seemed to have a martini permanently embedded in his fist, readily agreed.  The following morning, she was taught exactly how to evaluate a mimosa, how to judge the consistency of French toast, and how an eggs benedict is correctly assembled.  It was an education she carried with her for the rest of her life. 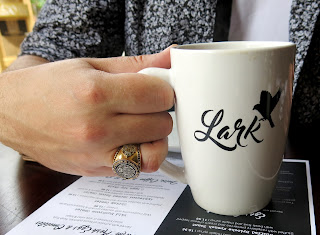 So when Brandy learned that Belvedere would be visiting Chicago (a rare event, as the man is highly in demand in his native Pittsburgh, where he ghost writes for a rather entertaining cultural program), Brandy knew she had to take him somewhere fantastic for brunch.  "I want to try something new," he told her, "So new that it should be somewhere even you haven't tried yet."  Brandy was distraught by this request, as she wondered how on earth she was going to impress his formidable palate with somewhere she hadn't put her stamp of approval on. 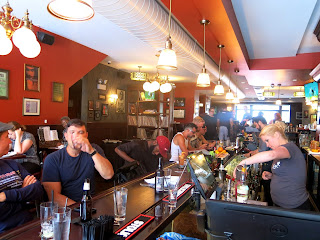 Thinking back to her visit to Replay in Andersonville earlier in the year, she realized that the same chef that had created the whimsy and originality on their menu had recently premiered a new restaurant in the Boystown neighborhood called Lark.  Lark shared some of the same crowd pleasing dishes as Replay, but with even more exciting additions, the least of which was an extensive selection of freshly made Neapolitan style pizzas.  "This could be as safe a bet as I'm going to get," she pondered, "Goodness me, I haven't been this nervous about a brunch since that fateful day we met!" 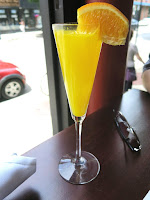 Lark had a beautiful, sunny interior which welcomed in the neighborhood with large windows at the front and a bustling bar, at which Brandy and Belvedere grabbed a couple of bright and fresh mimosas before heading to their seat near the stone pizza oven.  "Fresh juice, excellent ratio, not too sweet.  It's... acceptable," Belvedere pronounced, as Brandy let go a sigh of relief. 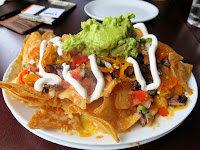 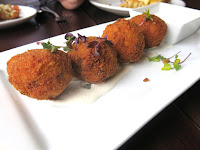 To start the meal, they placed an order for a plate of Smoked Bacon Arancini and at Belvedere's request (much to Brandy's surprise) a plate of Nachos.  The arancini were fairly light with a smokey, silky interior and a crispy exterior, which Brandy rather enjoyed.  The nachos, though, were quite the surprise with their crisp and freshly made chips, the cool dollops of guacamole and sour cream, juicy morsels of pico de gallo, and a touch of sweetness from a sprinkling of pickled peppers, topped off with some tender chunks of flat iron steak.  Brandy was truly shocked by how much she was enjoying the nachos, but Belvedere seemed non plussed.  "It simply sounded to me like everything one needs to sap up the previous night's...vices.  Never underestimate the value of a plate of chips," he said, sagely. 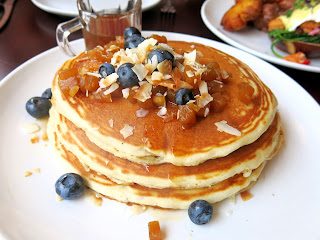 Moving on to something sweet, Brandy insisted they try an order of the Pineapple and Blueberry Pancakes.  Brandy was pleased to see these pancakes also came adorned with a snowfall of coconut and a side of homemade vanilla pineapple maple syrup.  "I never order pancakes unless they are something truly unique," she told Belvedere, "And these look like nothing I've ever seen."  The pancakes were substantial, but also fluffy, and had blueberries mixed throughout them as well as topping them.  Brandy just adored the caramelized flavor of the pineapple mixed with the coconut and tart berries to makes something at once exotic and familiar. 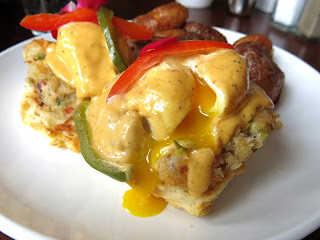 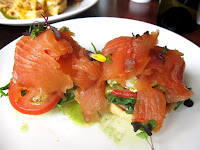 Following that, Belvedere ordered not one, but all of the Benedicts on the menu.  "How else is one to judge the true value of a brunch?" he explained when he saw that Brandy was looking slightly embarrassed by his gluttony.  The Lobster Benedict was just as good as Brandy remembered it from Replay with big chunks of lobster, a soft pretzel roll, and an herby hollandaise,  The Crab Cake Benedict had a loose texture to the cake with a bell peppery note, accented by an Old Bay infused hollandaise that gave it a real New England flavor.  Lastly, the Smoked Salmon Benedict was the perfect combination of a traditional benedict and a lox plate with fresh pesto hollandaise and some arugula and tomato to give the entire thing some levity.  "I've seen the rainbow for the colors," Belvedere said cryptically, "But now I need to study the clouds to truly see the sky." 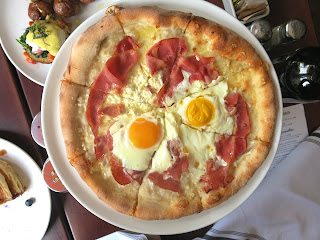 Brandy took this to mean that Belvedere wished to try the signature dish of the restaurant, a wood fired Neapolitan pizza, and there was no better choice than the Breakfast Pizza with mozerella, ricotta, smoked ham, and a sunny side up egg.  The hand tossed crust was thin and crispy with the slightest bit of chew to it, and the woods used to cook it (apple, cherry, and oak) really infused it with tons of flavor.  Brandy especially liked that the cheeses had been made in house, while Belvedere liked that the smokiness of the meat didn't overwhelm everything else.  "All one would need to perfect this would be a little salad on the side," Belvedere suggested.

Anxious as their meal finally came to an end, Brandy looked to her friend for his honest opinion.  "I thought the prices were what I would expect for that caliber of food," he started to say, "And the food itself was well prepared and thought out.  But what really impressed me was the staff, who seemed to know every tiny intricacy of the menu, which speaks to the passion they have to see a new comer to the Chicago dining scene survive.  I do so like to see a well informed staff."  And so, with a final sigh of relief, Brandy realized that she had actually succeeded in impressing her mentor and friend.  "Now, thinking in advance of our next meal," said Belvedere, "I've heard wonderful things about an Italian man named Al and his unique beef preparation."

The writers of this blog were invited to dine by the restaurant free of charge in exchange for and honest review. 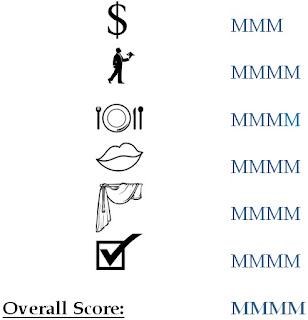 Posted by Bunny and Brandy at 9:11 AM