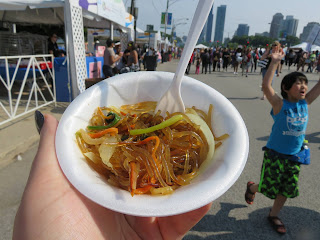 Food festivals come and go, but in Chicago, there is only one original, the Taste of Chicago.  While Taste of Chicago used to conjure images of dripping ice cream cones, deep fried dough, and sloppy pizza slices, Brandy has discovered in recent years that there is so much more to be discovered that is fresh and healthy.  "Far be it for me to condemn the eating of massive amounts of calories at a food festival, but all that greasy, heavy food stops being fun when it's 90 degrees and humid!" says Brandy, "I much prefer to keep things light and fresh when I attend this particular festival so that I can keep my energy high." 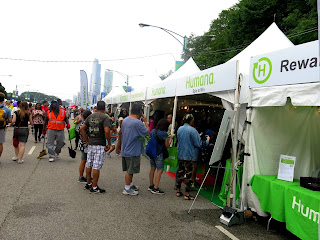 Luckily for Brandy, Humana has been keeping an eye out for those who are minded like she is.  For the last few years they have been bringing in a a team of nutritional physicians who identify a list of Healthier Choices (noted on booth menus with a green H) among the hundreds of offerings at the festival so that those who wish to avoid high calorie contents can enjoy the festival right along side their more indulgent friends.  This year’s program featured 75 healthy food options, including 43 vegetarian options and six gluten free options, from 29 Chicago restaurants that met the nutritional criteria.  Not only that, but Humana set up a rewards system, much like a scavenger hunt, wherein participants can collect stamps from booths who are slinging Healthier Choice options and cash those in for fun items and experiences at the Humana booth. 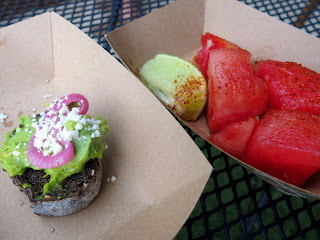 Brandy started off at the Farmer's Fridge booth with a couple of fresh appetizers.  First, she sampled a lovely Avocado Toast with pickled red onion and feta cheese.  Next, she opted for some Chili Lime Watermelon, which was exactly what it sounded like; blocks of fresh and juicy watermelon sprinkled with chili powder and served with a wedge of lime.  "It's like an edible cocktail!" Brandy exclaimed when she tasted the sweet, sour, and salty concoction. 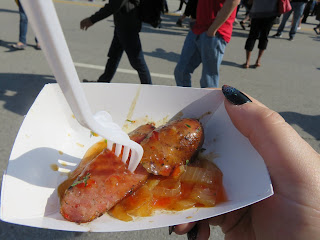 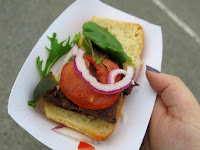 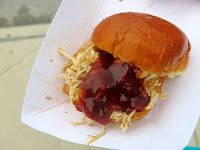 Next up, she went for some more hearty fair.  Stopping over at Beat Kitchen, she picked up a Vegetarian Slider, which was a bean-based patty topped with tomato, red onion, and greens.  "What a delightful alternative to a heavy, oily burger!" she exclaimed, "I would go so far as to say that even meat eaters would be pleased with something like this."  Speaking of meat eaters, Brandy next visited the Porkchop booth and snagged a Chicken Slider.  Again, this was hearty enough to satisfy her cravings, but light enough to keep her feeling great, with lots of tender spiced chicken, tangy BBQ sauce, and a soft bun.  And then to prove to herself that she could still eat adventurously while still letting the Humana choices guide her, Brandy stopped off at the Chicago's Dog House booth for a spicy and smokey Alligator Sausage (the other choice being a rabbit and rattlesnake sausage, but for some reason, Brandy has a thing about eating bunnies...). 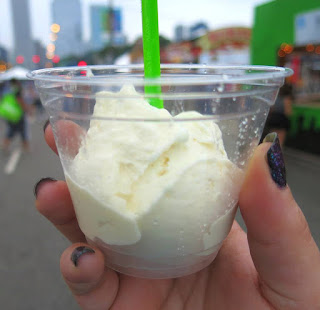 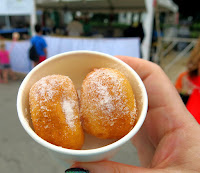 Lastly, Brandy was thrilled to see that sticking to Healthier Choices didn't exclude dessert.  She stopped over at the Dinky Donuts booth for a couple of freshly prepared donut holes, which she chose to top with the Old Fashioned Cream Pie coating.  These donuts were the perfect kind of sweet bite with just enough sugar to give Brandy a little pep in her step.  Her last stop of the day was to the Caffe Gelato booth for a heaping helping of creamy and cool Pineapple Sorbet.  Indeed, the portion size (and this was the tasting portion, not even the full size) was so generous that it was hard to believe this decadent little treat actually fell under the Healthier Options guidelines, especially considering the smoothness of the sorbet, which made it seem almost like ice cream. 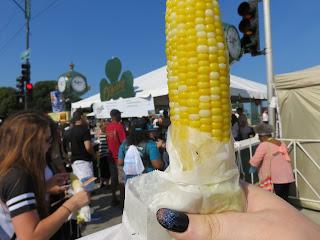 "Following those little green H's around all day has certainly not led me astray," Brandy commented as she finished off her sorbet while hiding from a little  mid afternoon rain shower, "I am most definitely full, I got to try lots of different foods, and I don't feel like a disgusting sweaty mess!  I'd say this was a winning strategy all the way around."

The writers of this blog were given complimentary tickets by Humana in order to facilitate the writing of this post.
Posted by Bunny and Brandy at 10:59 AM