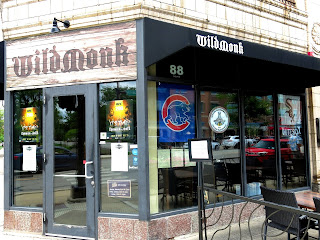 Brandy has made it her mission this summer to get out of the city and really explore the suburbs.  "As much as I love urban life, sometimes I just crave the quiet and space that only the suburbs can offer," Brandy has been known to comment, "I must really be showing my age if the suburbs are suddenly becoming appealing!"

Of course, the easiest way to explore an unfamiliar area is locate the best brunches on offer and make a good old fashioned road trip to try them out.  This is exactly what Brandy and her good friend Starr decided to do.  "Where shall we explore next?" Brandy asked her pal.  "Have you been to La Grange yet?  I hear there's some great places out that way," responded Starr.  "La Grange you say?  No, can't say I've explored that particular avenue just yet.  What do you say to a little Sunday drive?" 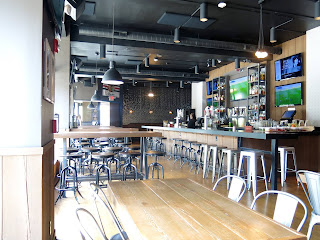 The spot they zeroed in on went by the name of Wild Monk and professed to be neighborhood bar with a menu of twisted pub classics.  Wild Monk boasted a darker toned and informal feel in the vain of a fashionable dive bar with raw wood tables and light aluminum chairs.  Brandy very much liked the art on the wall by the entrance, which looked like bottle caps formed into abstract hills and valleys.  "I would imagine a place like this at night would feel perfectly normal, but in the daylight hours, it does feel slightly out of place on a sunny suburban street!" Brandy contemplated. 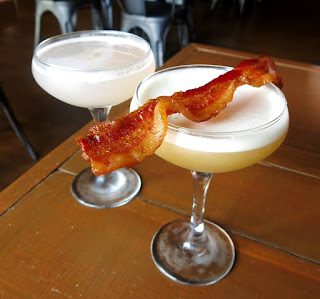 Starting off the morning properly, Brandy ordered a Bourbon Bacon Sour and Starr went for the Corpse Bride from the signature cocktails menu.  Starr's drink, which was made with gin, blood orange, lime, and a rose liqueur, had a bright and bold flavor with a real depth that ended on a light floral note.  Brandy's drink was nicely tart with a smokey and smooth finish, a wonderful twist on the classic cocktail, made especially unique by the use of a house made bacon infused St. Germaine.  "One would expect a bacon cocktail to be rather heavy," said Brandy, "But this is actually quite refreshing.  That's not a word one usually associates with bacon." 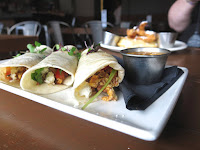 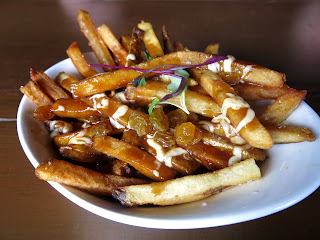 On the savory side, Brandy and Starr chose two plates to share; the Chorizo and Egg Tacos, and of course, the Poutine.  The tacos were actually quite delightful with a nice slow burn of heat from the spicy sausage, which made them more substantial than they looked, but still light enough that they didn't weigh the consumer down.  "Feta cheese is an odd choice here though," commented Brandy, "Not bad, necessarily, but odd."  The poutine also had a rather unique twist to it, which was a sprinkling of golden raisins along with the cheese and a veal gravy.  The hand cut fries on the poutine were perfectly crispy and salted, while the gravy had a lovely, meaty flavor, but the dish seemed to have substituted actual cheese curds for a small sprinkling of shredded cheese.  Being the poutine expert that she is, Brandy slightly disapproved of this fact, but was willing to forgive the dish because of its delicious gravy and the uniqueness of the raisins, which added a slight sweetness to every other bite.  "I only wish the raisins had been plumped a bit," Brandy said, "But I can't say that I've ever seen a poutine quite like this one!" 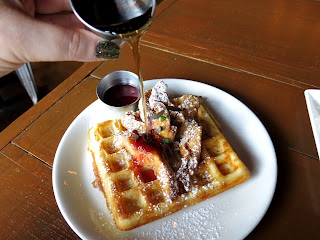 Transitioning into sweets, Brandy and Starr ordered the Chicken and Waffles.  Much to their surprise and befuddlement, the chicken, instead of the traditional breast or thigh, was thin strips laid across the waffle and sprinkled with powdered sugar.  "They certainly know how to keep things interesting here!" Brandy laughed.  "The waffle was rather dense, but had a nice malty flavor, while the chicken added a good punch of pepper in it's coating.  While the menu had listed the waffles being topped somewhat differently, they ended up being accompanied by a blood orange jam and some maple syrup, which Brandy rather enjoyed, as the mix of the two kept each bite slightly different and exciting. 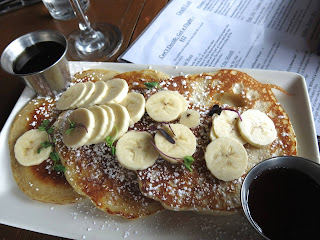 Lastly, they went full on sweet with an order of Banana Bread Pancakes.  This dish was rather disappointing, as it arrived not looking like what was described on the menu at all.  The pancakes were dense and doughy (Brandy suspected they had been made with the same batter as the waffles) and rather than having flavor added to them, they were simply served with sliced bananas on top.  While the menu had listed a banana bread beer maple syrup as a condiment, the one that was served seemed to be a pretty generic syrup instead, and the dish also came accompanied by the same blood orange jam as the waffles, which did help to change the flavor up a bit.  "I have no issue with pancakes like these, per say," said Brandy, "But if they had been described properly on the menu, I most likely would not have ordered them."

All in all, Brandy and Starr's little trip out to La Grange proved to be a nice one, though not as spectacular as they might have hoped.  Wild Monk certainly had their hearts in the right place with exciting ideas, a relaxed atmosphere, and friendly service (not to mention very reasonable prices that would make someone used to city markups sigh with relief), but the execution of the final product was just not quite there.  "One can certainly see an effort being made, and perhaps on another day, everything could have fallen into place and been absolutely wonderful, but today, it was just ok," Brandy said, "So for now, back home to the city, but perhaps a return to La Grange at a later date will be in order." 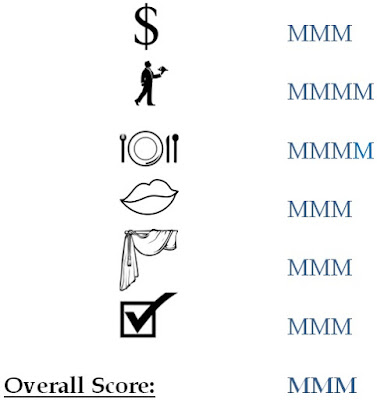