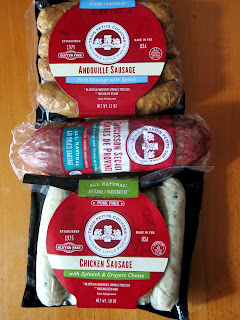 Brandy found herself in quite a predicament.  In an attempt to play peace keeper with some of the members of her ping pong team, she had decided to organize a brunch for the women.  "Nothing solves a conflict like a full stomach and a few mimosas," as she always likes to say.  Unfortunately, due to her reading glasses being damaged in a tragic accident with a knitting needle, Brandy had accidentally invited over the wrong ping pong team, and instead of her own troupe of five senior aged woman, she was now about to play host to a world ranked ping pong championship squad.  "What on earth am I going to serve these people?" she wondered in a panic, "I don't suppose tea and crumpets will suffice for this lot!"

Luckily, she had recently become aware of an extraordinary company out of New York called Les Trois Petits Cochons, a gourmet charcuterie shop that serves a variety of handcrafted pâtés, mousses, terrines, sausage, smoked meats and other French specialties. Les Trois Petits Cochons (French for The Three Little Pigs) is now offering their products in grocery stores and specialty shops across the country after having been a leader in the business for the last 40 years.  Knowing she had a few of these meaty goodies hiding in her fridge, Brandy decided to put together some fabulous dishes for an impromptu sausage party. 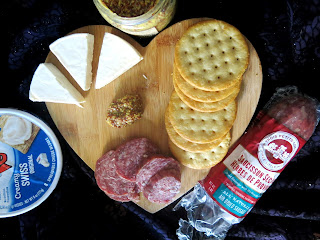 Inspired by the high quality of the sausages, Brandy decided to use them to mix up some brunch favorites.  First, she put together a little charcuterie plate with the intensely flavored dried sausage, which was spiked with Herb de Provence.  She paired this sausage with a mild, soft cheese, a pungent whole grain mustard, and some buttery crackers so that her guests would have something to snack on while she prepared the rest of the food. 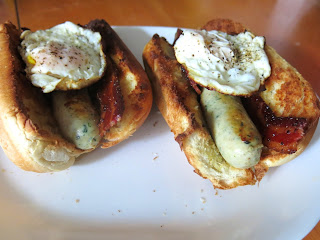 Next, Brandy presented the room with some Breakfast Dogs, using the chicken sausage with spinach and Gruyere cheese.  These sausages were so flavorful that they didn't need much dressing, but Brandy added a strip of crispy bacon and a fried egg on top, planting everything on a buttered and toasted bun.  She thought about adding some cheese, but with the cheese already in the sausage, she didn't think she needed it, and she also decided against a sauce, as the sausage itself was so juicy that just the yolk form the egg sufficed to add a touch of richness. 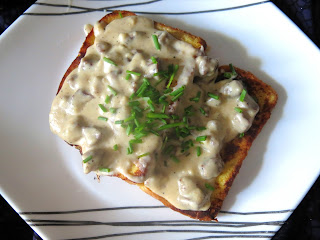 Lastly, Brandy used the Andouille sausage to whip up a batch of peppery sausage gravy.  Instead of ladling the stuff over some flaky buttermilk biscuits, as Southern tradition would dictate, she instead made a batch of French toast (simply battering slices of country white bread with egg and milk and then frying them in butter) and scooped generous amounts of the thick and spicy gravy over that, topping it with some fresh chives.  This made a rather nice variation on the classic dish, firmly putting the focus on the gravy and its nuggets of delectable meat.

Pleased with the reception they were given, the international Ping Pong champions offered Brandy a spot on their team.  "No, I couldn't possibly abandon my little group of ladies," she laughed, "But should you need a cook to travel with you to the world championships in London, I wouldn't mind a little free vacation to my homeland."

The writers of this blog were sent sample products by the company in order to facilitate the writing of this post.
Posted by Bunny and Brandy at 10:54 AM