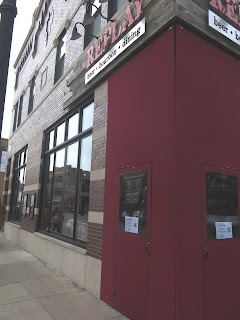 It's extraordinary how restaurant trends evolve.  One day it's steak houses that are all the rage.  The next, it's bowls of ramen or crazy burgers.  But there is one trend Brandy rather likes the look of: the gaming gastro pub.  Having visited a few of these denizens of delight over the last year or so, Brandy has grown rather fond of the concept, which often mixes things like pinball, table top games, bowling, and retro video games ("Virtually all video games are new to me, so there's no point in calling them retro," Brandy often gripes) with creative new twists on typical bar food and cocktails. 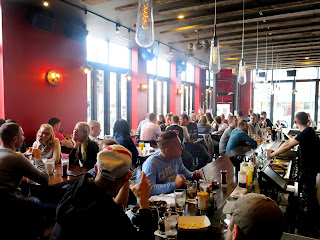 It was while trying to explain these new kinds of restaurants to her friend and go-to gaming expert, Hawk, that Brandy came across one she'd not yet visited.  Replay in Andersonville not only boasted a wealth of free video games to play, they also featured an extensive menu and a huge selection of beers, bourbon, and cocktails.  "So you're telling me I can go there, play a game, order my drink, play another game, order food, play another game, eat the food, and then play another game?" Hawk asked in disbelief.  "I suppose so," Brandy replied.  "Amazing!  I didn't think I could do that anywhere other than my own bedroom!  Let's go!" he exclaimed. 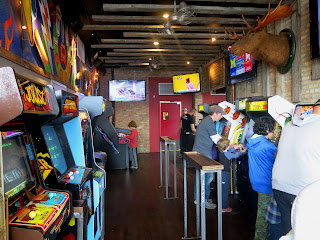 Replay had a nice, comfortable neighborhood bar feeling to it while still featuring some little design touches, like a colorful hand painted mural that surrounded the gaming area of the room.  It's corner location meant that the space got plenty of light, and while a little cramped at the tables,  the isles between the games were easily maneuverable. 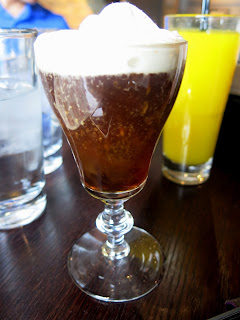 Brandy and Hawk started off with some pick me ups, sampling the an Irish Coffee and a Kentucky Coffee.  The Kentucky Coffee was good and strong with a decent hit of of bourbon flavor that Brandy really enjoyed, while Hawk found his Irish coffee to have the perfect ratio of booze to caffeine.  "I don't know that I've ever seen the point in alcoholic coffee drinks, practically speaking.  I mean, one end gets you going up while the other end brings you back down," said Hawk.  "Yes, well, I don't think many people drink alcoholic coffee beverages for practical purposes," Brandy replied. 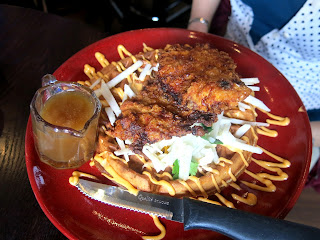 First up, the pair split an order of the Fried Chicken and Waffles.  Brandy really loved the mix of savory and sweet on this dish, especially as it had been topped with a crunchy jicima salad, some spicy sriracha aioli, and a drizzle of decadent maple butter.  The chicken was nicely crisp on the outside and extremely juicy on the inside, while the waffle boasted a rather pleasant chewy texture. 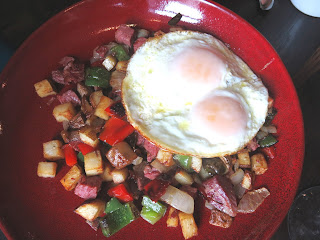 Moving on to entrees, Hawk dove in with the Corned Beef Hash.  This was most certainly a dish for a practiced carnivore, with more hunks of meat than anything else.  The meat itself was very nicely spiced, but not greasy at all, which Hawk appreciated.  "A hearty breakfast like this is the perfect thing before a marathon gaming session," he commented, "Gives you plenty of protein for a sustained energy release.  That sort of thing comes in handy at about the seventh hour of game play."  "Seventh hour!?" Brandy exclaimed.  "Oh, that's nothing.  I once saw a guy play a week straight of Pac-Man, only napping for short bursts in between level screens." 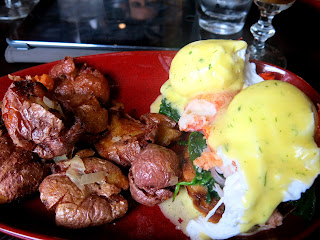 Brandy chose the Lobster Benedict for her main course.  She particularly liked that this version of the brunch staple used a toasted pretzel bun in place of the more traditional English muffin, which can sometimes bog the dish down with toughness if not toasted properly.  The hollandaise, which had been infused with dill and tarragon, was extremely flavorful, but not overpowering, and the lobster was plentiful and tender.  "I feel a kinship with this particular Benedict," Brandy said, "At first it seems rather luxurious and extravagant, then it seems bold and unexpected, and finally soft and agreeable."  The potatoes on the side were also exemplary, with a lightly crisp outside and a buttery flavor. 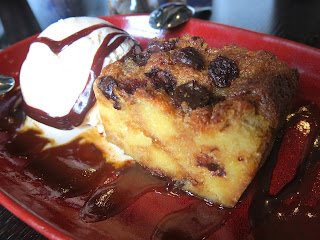 Lastly, the two finished off the eating portion of their meal with a serving of Bread Pudding.  This particular confection had a lovely caramelized exterior and a soft, rich interior.  The flavor was predominantly of a warm cinnamon, but was also accented by dark, melty chocolate chips.  "The sugar in this will help keep our minds sharp when we head into the thick of battle," said Hawk.  "And by battle, you mean pressing buttons to shoot at little electronic images?" "YES!"

And so now properly prepared, the two friends went to war on the gaming floor.  A few hours later, Hawk's ego was feeling pretty bruised by Brandy's surprisingly agile and tactical moves.  "Good thing you did get a good meal in you before taking me on," Brandy said, smugly, "Now at least you'll have the energy to accept defeat!"  "But I don't understand," Hawk gawked, "I thought you didn't know the first thing about video games!"  "I don't," said Brandy, "But I never said I wasn't a good shot." 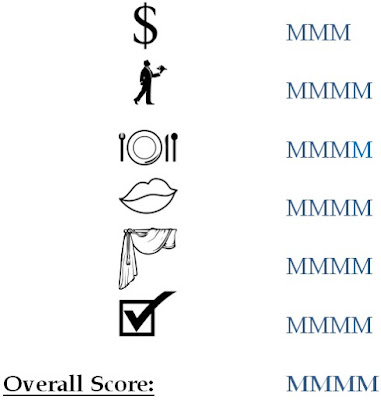