From the Kitchens of Bunny and Brandy: Composed Toasts with Amish Roll Butter

Brandy has a butter problem.  She loves it, perhaps a bit too much.  When she was a child, she even used to sneak bites off the butter her mother kept on the counter.  "Not the healthiest practice in the world, I'd imagine, but I suspect that is what gave me the refined palate I have today," says Brandy. 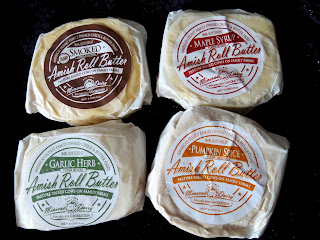 Because of that love for butter, Brandy has become pretty picky about the butter she uses on a daily basis.  "No overly salted, artificially colored, flavorless butter will do for me," she says, "When butter is the base upon which you build your dish, why on earth would you want to use an inferior product?  It's like laying down a foundation of plastic straws to build a sky scraper!" 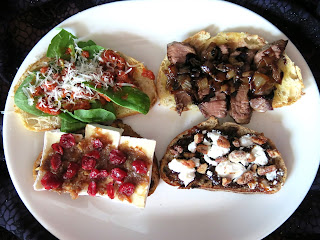 With that in mind, Brandy recently had the chance to try some extraordinary products from Minerva Dairy, America's oldest family owned cheese and butter dairy.  Minerva Dairy specializes in Amish Roll Butter, a slow churned product that is made in small batches and is free from hormones, artificial flavors, and contains a whole 84% butterfat.  Brandy was especially interested in the flavored butters, which came in varieties like Garlic and Herb, Smoked, Pumpkin Spice, and Maple Syrup.  "Not only is the quality of this butter amazing, but these flavors are so intense and pure!" Brandy exclaimed when she first tried the butters.  Her method of testing the flavors was to make some simple pieces of toast, and that is what gave her a brilliant idea for how to best feature these brilliant butters.

The composed toast has become all the rage among the brunch elite in the last few years as a way to showcase superior bread, seasonable vegetables, and artisan condiments, so naturally, Brandy had to come up with her own version, or versions rather.  Inspired by the flavors of the Minerva Dairy Amish Roll Butters, Brandy devised a quartet of seasonal inspired toasts, loaded with bold flavors and the freshest ingredients. 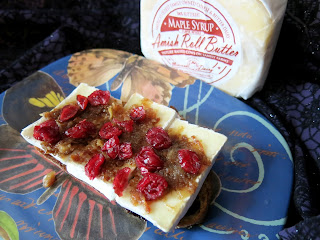 For the winter toast, Brandy chose to use the Maple butter, the most delicately flavored of the bunch with a slight sweetness to it.  She paired this with a pecan raisin bread, some un-curred bacon jam, a sharp and soft brie cheese, and some sweetened dried cranberries.  "Makes me think of sitting by fire with a cozy blanket," Brandy said, tasting her creation, "Creamy, slightly sweet, slightly salty, and just delicious!" 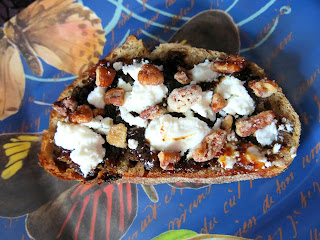 Moving on to the majesty of fall, Brandy once again used the pecan raisin bread, but this time she slathered it in the Pumpkin Spice butter and added some crumbled goat cheese, fig butter, and candied pecans for an extra crunch.  This sweet toast was nicely spiced with earthy flavors that had Brandy dreaming of red and orange leaves and the smell of rain in the air.  "Fall is so close, yet so far away," she sighed, "But this year I've got the jump on the pumpkin spice mania!" 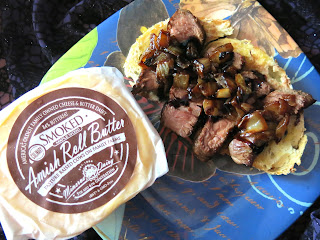 Imagining grills billowing smoke high into the air, Brandy turned to the Smoked butter for this one.  As this butter had the strongest flavor of the bunch, she knew she had to pair it with some pretty rich ingredients, so she used a roasted garlic bread, some thinly sliced sirloin steak, a dose of caramelized onions, and a drizzle of sweet balsamic vinegar glaze.  "It's like a steak house in a single bite!" she exclaimed upon tasting her creation, "Fresh and fruity flavors are all well and good, but if one's summer doesn't predominantly taste like meat and smoke, then I consider it a wasted season." Finally, Brandy sliced up the roasted garlic bread once more, but this time she added the Garlic and Herb butter along with a red pesto (made with sun dried tomatoes), some fresh baby spinach, and a sprinkling of freshly grated parmesan cheese to create a lighter version of a bruschetta.  "Anyone who says there's too much garlic on this toast can never truly be a friend of mine," she shrugged before sitting down to devour all of her toast concoctions.

The writers of this blog were sent products by the company free of charge in order to facilitate the writing of this post.
Posted by Bunny and Brandy at 10:48 AM