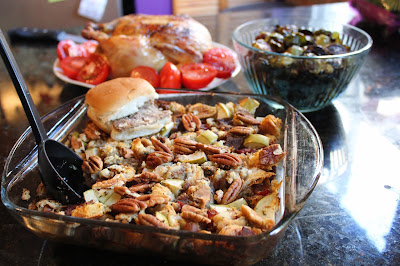 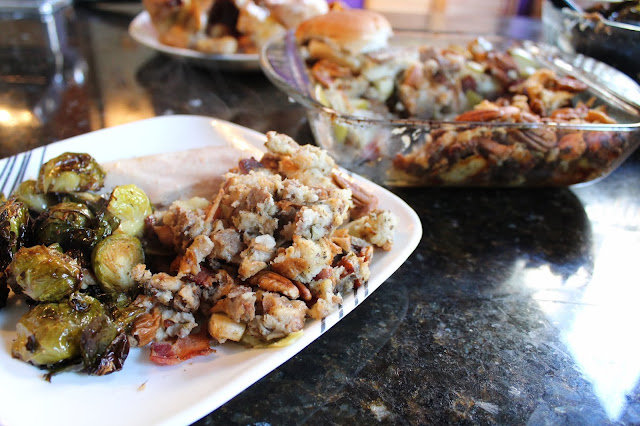 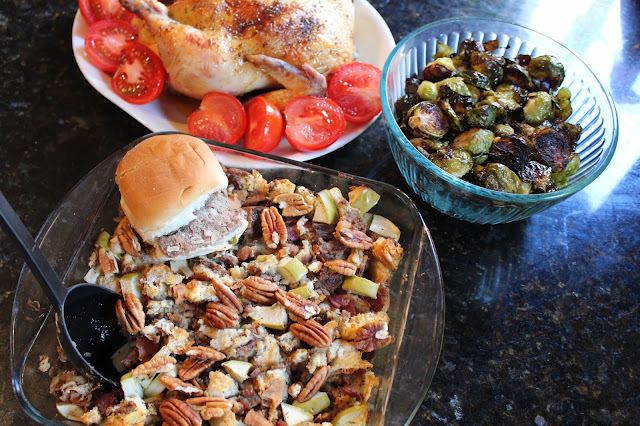 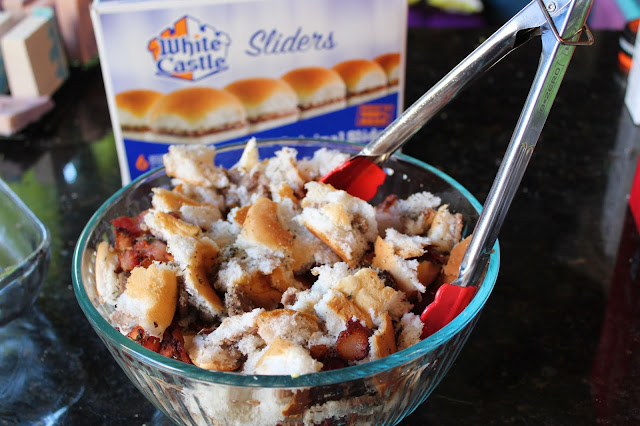 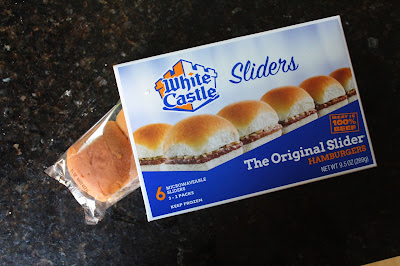 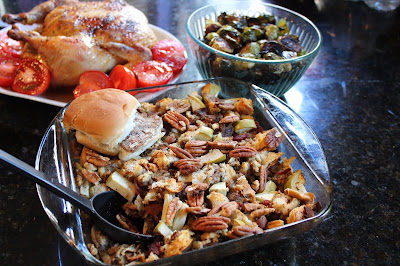 Makes about 9 cups (enough for a 10-to-12-pound turkey). Note: Allow 1 Slider for each pound of turkey, which will be equal to 3/4 cup of stuffing per pound.
Posted by Bunny and Brandy at 10:09 AM No comments:

Some products mentioned in this post were provided by Raw Spice Bar for free in exchange for an honest review.

A few years ago, I was contacted by a wonderful subscription service called Raw Spice Bar. I was so impressed with the quality they offered that after sampling one month's worth of their spices and recipes, I purchased a year's subscription for my mom as a Christmas present. Now, with the holidays fast approaching, I was excited to hear that they had recently revamped their service and custom spice blends.

Previously, Raw Spice Bar would send subscribers mystery spice blends in small portions along with recipes that showcased the spices. The only problem was that the spices generally came packaged in small resealable bags, which weren't the most convenient way to store them for later use. 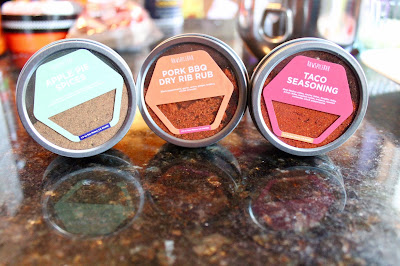 Raw Spice Bar has now re-vamped their service and packaging to be more user friendly and customizable. Customers will be prompted to take a culinary personality test of sorts, and from there will be recommended various spice blends that would be most useful to them from the 150+ varieties they carry. Then, there are options for how frequently you would like to receive the spices (once a month all the way up to once a year). The spices now come flat tins that are easy to open, close, and store, which are clearly labeled, and have clear lids so as to see the contents. Don't want to commit to a subscription? You can also buy the spices a la carte from their shop! You can pick up any number of spices, herbs, or blends in sizes ranging from 1 oz to 10 lbs.

I was lucky enough to try three of Raw Spice Bar's most popular spice blends: the Apple Pie Spice, the BBQ Pork Rib Dry Rub, and the Taco Seasoning. Of course, I had to experiment with these blends using some classic brunch dishes.

For the Apple Pie Spice, I decided I wanted to do some stuffed pancakes. I used an English style pancake (a recipe for which you can find in one of the oldest Bunny and Brandy posts) and then set about making my filling. I peeled and cut 4 Honeycrisp apples into one inch chunks and the tossed them in a generous amount of the spice blend. One unique thing about this spice blend is the addition of grains of paradise, a small peppercorn-like spice that not only added flavor, but texture to my apples. I sauted the apples in some butter until they were soft all the way through. My apples were particularly sweet, so I didn't need to add any sugar to the mix. I then took a block of room temperature cream cheese and whipped it with a little vanilla extract and sugar to make a topping for the pancakes. Since English pancakes are pretty pliable, I was able to stuff them with the spiced apples very easily. I really enjoyed this spice blend because it gave the very sweet apples an almost savory quality, and was definitely more complex than adding just standard cinnamon and nutmeg. 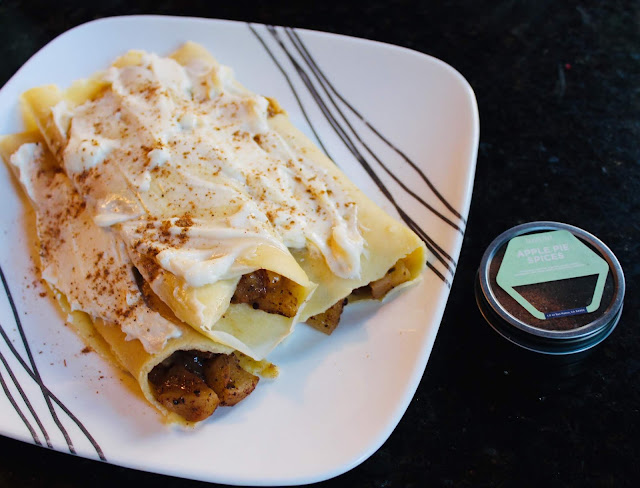 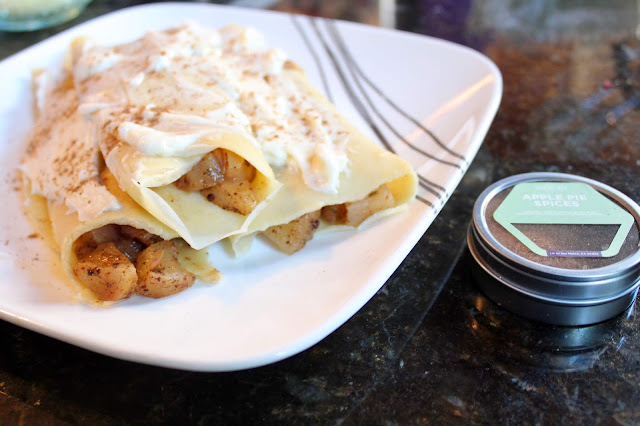 For the Pork BBQ Dry Rib Rub, I wanted to re-create a dish I made when I first tested out Raw Spice Bar's products; spice roasted root veggies. I cut up some small yellow potatoes, rainbow carrots, cremini mushrooms, and a red onion, then coated them in vegetable oil and the BBQ spice blend, then I roasted them for about 45 minutes at 450. The result was outstanding. This particular spice blend has a nice subtle heat that really worked well with the hearty veggies, but it also had a sweetness that was complimented by the onions and carrots. Again, very complex and not your average BBQ seasoning. 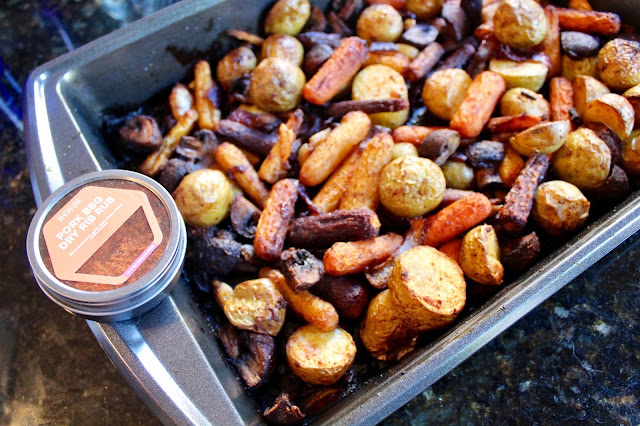 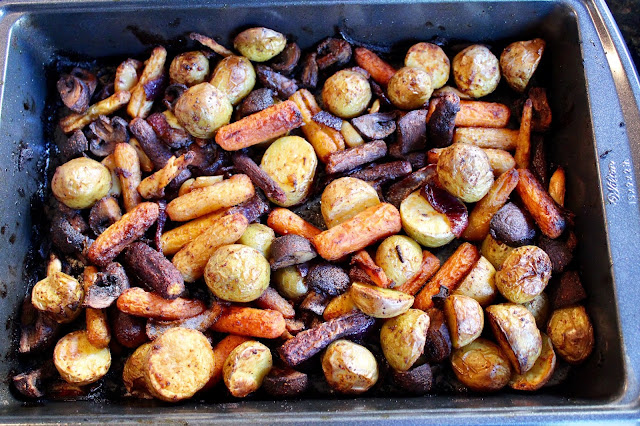 Lastly, I decided to use the Taco Seasoning somewhat conventionally by adding it to some ground beef. One thing of note is that these spice blends are salt free so that you can add salt to your own taste. I cooked up a quick omelette and sprinkled it with a Mexican cheese blend. I then topped it off with the seasoned beef, some fresh tomato, and diced white onion to create what I call a White People Taco Omelette, a loving tribute to the Tex Mex style tacos, covered in orange cheese, sour cream, and shredded lettuce that I grew up around in Arizona. I was surprised with how subtle this spice blend was and actually wished I'd added a bit more to the meat. But the flavor was definitely much better tasting than the chemical tasting taco seasoning one can buy at the grocery store. I tasted mostly the coriander, but the addition of several different kinds of chilies gave it a really well rounded flavor over all. 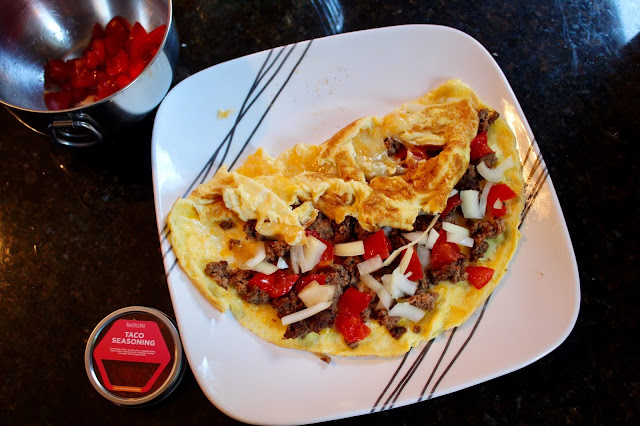 For me, Raw Spice Bar is still killing the spice game, and I really appreciate their new stackable storage containers. The thing I love most about this kind of service is that it really encourages me to step outside my flavor box and start thinking creatively. And for someone like me, who gets nervous about how to properly season their food, that's really saying something!
Posted by Bunny and Brandy at 2:10 PM 1 comment: