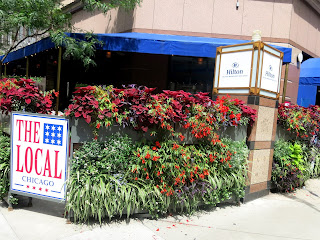 A few weeks ago when Bunny was in town for a brief stay, Brandy actually managed to not only get her out for some brunch, but also her husband Benedict.  "There'll actually be quite a few of us, if that's alright," Bunny had mentioned to Brandy, "We're both in Chicago so little that we're pulling in everyone we can."  "Not a problem, my dear," Brandy replied, "Now, what we need is a spot that's easy, comfortable, and accessible to everyone..."  "And remember, dear, not everyone is quite the gastronome such as yourself," Bunny said.  "So...a molecular gastronomy brunch is out of the question then?  Right, I'll see what I can do," Brandy mused. 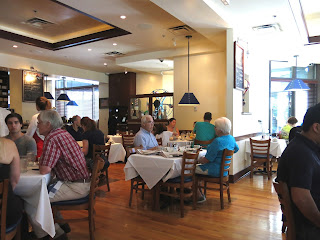 Eventually, Brandy decided on The Local Chicago, a sister restaurant to Chicago Cut Steakhouse that used many of the same high quality ingredients in their dishes.  The Local, true to its name, was a very down home and simple space, decorated mainly with a rustic Americana theme in mind.  The space itself had lots of nooks and crannies to sit in, which Brandy rather liked, and the enclosed patio space was rather pretty as well.  Bunny's group of family and friends, including one particularly adorable young brunch fan who went by the name of Baby Bacon, were already gathered around a large table towards the back of the restaurant when Brandy arrived. 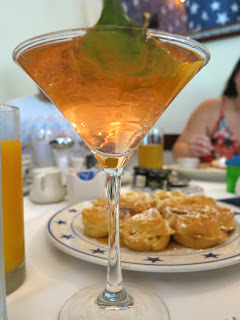 Though a buffet was on offer as well, everyone in the group chose to go a la carte.  Quickly, decisions were made and the table was filled with plates at a rapid pace.  Brandy was the only member of the party that had ordered a cocktail, as she just couldn't resist the lure of the Local Picnic, a strawberry and basil infused vodka concoction.  Brandy (and after a sip, Bunny agreed with her) thought the drink was extremely well balanced, not being too sweet, too astringent, or too herbaceous, but perfectly in the middle of all three with a nice citrusy zing to finish it off.  "This is the type of drink I wouldn't mind sipping all summer long," Brandy sighed, moving the martini glass away from Baby Bacon's grasping reach. 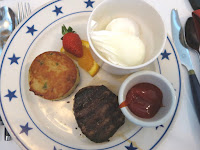 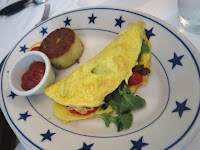 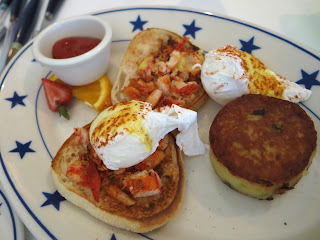 The savory entrees for the group included the Bacon Omelet, the Classic American Breakfast, the Prime Filet and Eggs, and the Lobster Benedict (no bonus points for guessing who ordered that!).  The omelette and classic breakfast were pretty standard, but done well, both with a nice smoky bacon and some somewhat fluffy eggs.  The Prime Filet, which was Brandy's entree, seemed to confuse her a little.  She had ordered the dish, which was by far the most expensive option on the menu, because the cut of meat provided was the same as was served at the sister steak house and was a little disappointed to see that the steak was a little on the small side, but cooked very well.  The two poached eggs it came with were oddly served undressed on the side in a small bowl, requiring Brandy to lift them up and place them on the steak herself.  The menu had also listed the dish as being served with hollandaise, but only a little ramekin of ketchup was supplied.  Bunny's dish was also a little underwhelming, as it seemed to be scoopfuls of undressed lobster simply placed on an English muffin and topped with more poached eggs, again neglecting the hollandaise sauce that might have transformed the plate into a more traditional Benedict.  A favorite of the whole table was the Hashbrowns that accompanied almost every dish, which were actually chunky mashed potatoes formed into a cake and crisped on both sides, making for a crunchy outside and a creamy inside. 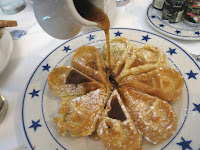 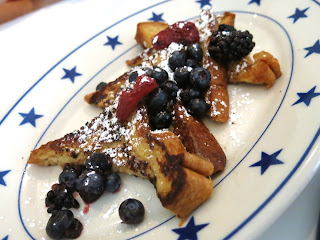 On the sweet side, the table sampled the Vanilla Brioche French Toast and the Belgian Waffle,  The Waffle was another let down, as the menu had listed it served with Devonshire Cream (indeed, this was the main reason the ladies had wished to try the thing, as it would have offered a little taste of back home in Old Blighty), but it came only with a little pot of maple syrup.  The waffle itself was on the denser side with a slightly grainy texture and no crisp exterior.  Brandy thought the thing, which was actually quite pretty in appearance, could have benefited greatly from a little fresh fruit on top.  On the other hand, the French toast was rather delightful with a soft texture, a nice eggy taste, and some fresh berries to perk things up (Baby Bacon particularly liked snacking on the blueberries).

The service at The Local was efficient and friendly, as was the atmosphere, even if the food was a little lackluster, especially for the prices charged, but the true goal of that morning was achieved, and that was a rather pleasant, distraction-less reunion.  "I do so miss this," Bunny sighed, Baby Bacon bouncing on her lap, "I really must remember to stay for brunch on my stop overs in Chicago more often.  There is just no other city with this kind of variety and flavor."  "Yes, well, next time, perhaps, we'll have to find somewhere a bit more exciting," Brandy grumbled, "I have heard a rumor about a spot in Roger's Park that serves sushi and pancakes."  "That sounds revolting!" Bunny squeaked.  "Maybe, but we won't know until we try it, will we?" Brandy grinned. 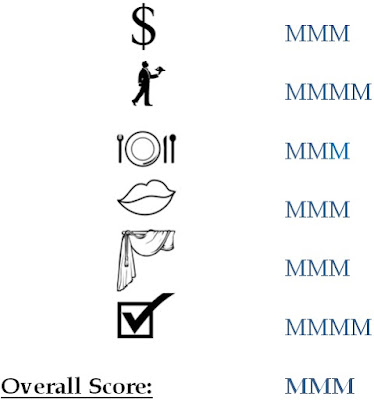