Southport & Irving (SIP) or It's a Wonderful Night for a Brunch 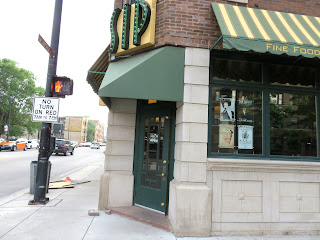 Brandy has always been very strict about what time brunch should be eaten at.  "Before 10:00 am is too close to breakfast, and after 2:00 is too late for lunch.  For me, the correct brunching time is 11:00 or 11:30 and I don't look kindly upon those who would disagree with me."

It is for this reason that Brandy positively scoffed when she first heard about the Late Night Brunch menu being offered at Southport & Iriving (or SIP for short).  "Brunch?  After sundown?  What in the name of kidney pie does that mean?"  Indeed, so perplexed was she by this special menu, which is only served after 10:00 pm during the week, that she simply had to break her own rules and check out this odd phenomenon for herself. 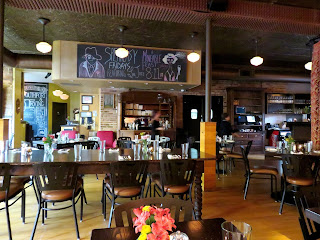 SIP had a laid back sort of speakeasy feel with a small bar area up front and a larger dining area in back.  The woods were dark and antiqued, the windows adorned with stained glass panels like an old tavern, the ceilings were intricate tin panels, the walls were exposed brick with gold accents throughout the room, and bouncy jazz music played throughout the restaurant, first over a loud speaker, and later in the evening from a live combo of musicians. 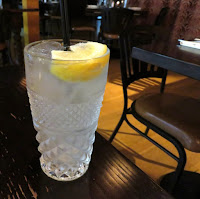 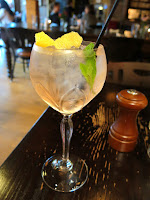 The evening started off as all evenings should (as well as all brunches) with a cocktail.  Brand chose The Shakedown, which consisted of dry gin, lavender syrup, lemon juice, orange bitters, and cava.  Brandy thought the drink evoked a 1920's feel with its well balanced mix of sweet, bitter, sour, and herbal flavors.  So good was this concoction that Brandy allowed herself to be talked into a second cocktail, and this time she chose the G & T, a house spin on a traditional gin and tonic with a touch of vermouth and a rhubarb seltzer.  Brandy was enchanted first of all by the waitress, who proudly proclaimed the glass the drink was served in as "the prettiest glass in this place!" but the drink too brought a smile to her face.  Simple, clean, uncomplicated, with a bright and zingy taste that made for one very refreshing cocktail. 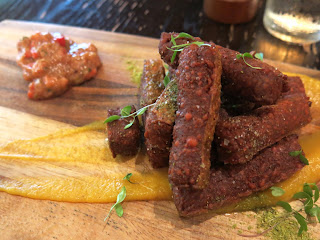 Starting her meal off, Brandy ordered by the Chickpea and Beet Fries.  She nearly gasped when the dish was brought to the table, as it seemed almost too pretty to be served in such a casual atmosphere.  The fries themselves had a very unique flavor and texture that Brandy immediately enjoyed.  The outside of the fries had a pleasant crispness and the inside was surprisingly light, earthy, and nicely spiced.  Instead of salt and ketchup, these fries came adorned with a sweet and sour rhubarb agrodolce, a golden beet puree, and a fennel and garlic dust, all of which made each bite a little more exciting than the last. 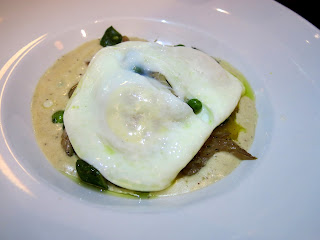 For her main course, Brandy was presented with a good old fashioned plate of Biscuits and Gravy with a couple of over medium eggs, rabbit confit, English peas, asparagus, and fiddle head ferns.  "Bunny, forgive me for enjoying one of your brethren," Brandy chuckled quietly to herself as she dug into the plate.  The gravy was thick and creamy with a nice subtle meaty flavor from the rabbit, while the biscuits were dense, but not dry, and had large pockets of cheesy goodness on the bottom of them.  What Brandy most enjoyed about the dish was actually the vegetables, which were fresh, crisp, and surprising in what is normally such a heavy dish.

"Well, it's certainly odd to be enjoying brunch while the sun is below the horizon, but I can't say the time of day has tainted the spirit of the meal," Brandy proclaimed proudly as she sat back in her seat and sipped the last of her cocktail.  Indeed, the food was much more refined than what Brandy had anticipated, as the words "Late Night Menu" generally denote puddles of grease on one's plate.  With cocktails averaging around $10 a piece and plates mostly between $10-$15, the prices certainly weren't out of the typical range for brunch dishes, and though there was a bit of a lag in service, the personnel were friendly, knowledgeable, and enthusiastic about the food they were serving.  "Well, I may have to re-think my stance on the timing of a good brunch," Brandy mused, "Because if this is the kind of brunch one can get after ten o'clock at night, I might never have to see the light of day again!" 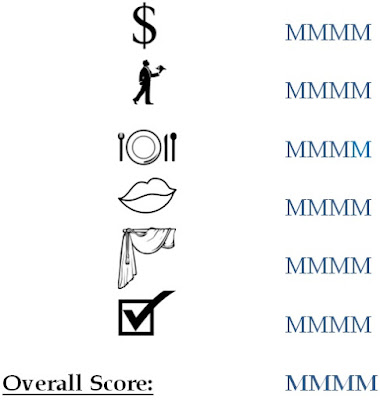