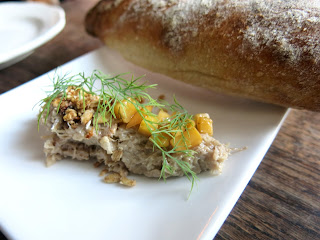 A few weeks ago, Brandy discovered some of the joys of Logan Square with help from the Subscrybe App and had such fun doing it, that she simply had to return for another culinary tour of the neighborhood.  This time, she brought along Starr, otherwise known as Chicago Foodie Girl, who was also anxious to put this modern miracle to the test.

Subscrybe is an app currently available in the iTunes store that gives their subscribers a pass to their neighborhood with weekly and daily redeemable deals at local businesses.  Monthly subscriptions are $59.95 and weekly subscriptions are only $19.95.  Currently, the app is featuring their inaugural pass to Logan Square, but plans for other neighborhood and cuisine specific passes are in the works, 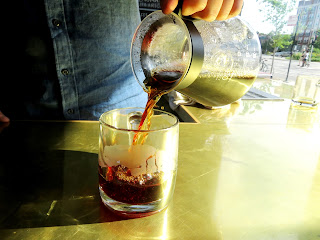 The first stop that Sunday afternoon was the newest location for Bow Truss Coffee, which was offering a wide variety of their signature drinks through Subscrybe.  Brandy chose the Sumatran Pour Over, in which the slow brew process not only created a beautiful color in the beverage, but also helped to bring out the fruitier notes in its flavor.  Though it was quite a warm day, Brandy rather enjoyed taking a moment to savor the splendid coffee while she and Starr caught up on all the latest food gossip. 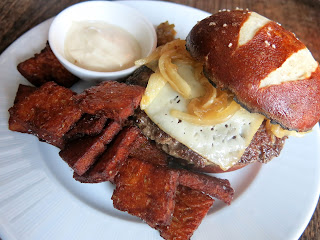 Next stop was the rustic gastro-pub Table Donkey and Stick.  After an appetizer of Pork Rillettes with peaches and a fresh baked loaf of bread (which was delectable), both Starr and Brandy redeemed the option for the Alpine Burger.  The burger came on a real pretzel bun with an aged Swiss cheese and caramelized onions, as well as sides of horseradish cream, apple mostardo, and instead of fries, mini potato latkes.  Brandy was simply entranced by this burger and everything about it, from the soft, slightly salty bun to the savory and sweet apple mostardo (which she piled on the the burger at the server's suggestion) to the crispy, buttery little potato cakes, to the mild cream she dipped them in.  "How often can we redeem an entree here?" she asked Starr mid bite.  "Weekly, I think," she answered.  Brandy thought this over.  "I might need to buy multiple passes so I can have this burger a few more times," she said at last. 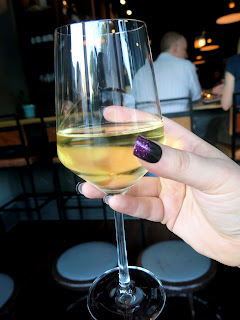 Following that up, the two adjourned to Webster's Wine Bar, a beautifully dark and mysterious spot facing the square itself that offered any glass of wine $10 and under via the Subscrybe app.  Seated on a banquette by the window, the ladies perused the extensive wine menu while their helpful server made a few recommendations and brought over small sips of wines for them to try.  Brandy finally settled on a 2014 Edmunds St. John "Heart of Gold" Vermentiono blend from El Dorado, California.  The buttery colored white wine listed notes of pineapple, orchard fruit, and mayflowers, which sounded like an appropriately light follow up to the delicious, if heavy burger.  Though a little dryer than Brandy normally likes, the wine was certainly very fruity, bright, and refreshing. 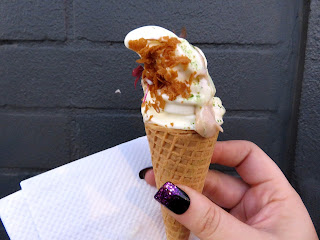 This left the ladies just enough time to run into Yusho for a couple of their signature soft serve cones, made with jackfruit, matcha powder, and banana puree.  This variety is only available in the summer, as the soft serve changes seasonally, but this unique combination of flavors and texture is definitely worth stopping in to try before its gone, and luckily, its one of the redeemable options on the Subscrybe app.  The jackfruit flavor is subtle, but very creamy, with an almost caramel like taste.  The delicate cones began to melt rather quickly on that hot day, but the two ladies were so glad they had decided to end their day in Logan Square with the iconic treats that they happily licked the drippings off their fingers without complaint.

If you would like to try out Subscrybe for yourself, use the code BUNNYBRANDY to get $15 off either a monthly or weekly subscription.  That brings the price of the weekly subscription down to just $5 for a whole week's worth of meals, treats, and drinks!

The writers of this blog were given services from Subscrybe at no cost in order to facilitate the writing of this post.
Posted by Bunny and Brandy at 10:49 AM