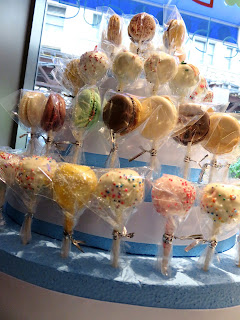 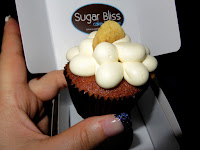 There is nothing quite as magical as a well stocked bakery.  Indeed, the mere sight of a tiered cake in a window is enough to send Bunny into a fit of joyful giggles.  This is precisely why when Brandy got word of a little to-do at Sugar Bliss Cake Boutique downtown, she knew she had to send Bunny (who was briefly in town following an excursion to The Forbidden City with her husband, Benedict) in her stead.

Bunny stepped into the adorable store front (which was opened eight and a half years ago by owner Teresa Ging), already enchanted by the chocolate brown and dusky blue color scheme.  Treats had been laid out in Wonka-esque displays, like a tower made of macaroon lollipops and cake pops and another made of mini cupcakes with Sugar Bliss's signature flower shaped icing.  "Oh my, I'm getting a sugar high just standing here!" Bunny squeaked with delight. 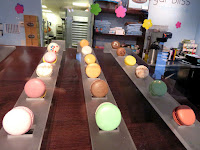 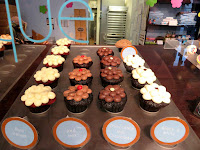 Diving right in, Bunny snagged a few of the cake pops.  Her favorites were the Chocolate Covered Strawberry, which had a genuinely fresh fruit flavor, the buttery Carrot Cake with cream cheese frosting, and the colorful Vanilla Birthday Cake with rainbow sprinkles inside it.  The macaroons, which came in flavors like Raspberry Lemonade, S'mores, and PB&J were made even more whimsical by putting them on sticks and wrapping them up like little lollipops.  "I do so love macaroons, but sometimes they feel too fancy for every day.  But like this, well, anyone can enjoy a cookie on a stick!" as Bunny put it. 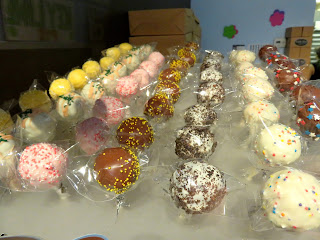 The miniature cupcakes were splendidly moist and came in flavors like Red Velvet, classic Chocolate and Vanilla, and Banana Banana, and Bunny thought that the little dollops of frosting that formed the flower on top made for the perfect icing-to-cake ratio.  So infatuated with the frosting technique was Bunny and she somehow ended up in the kitchens with a piping bag in her hand, receiving instructions on just how to accomplish the design.  Though not as good as the professionals, Bunny gave it the old college try and managed to frost a few mini cupcakes with a minimal amount of shame. 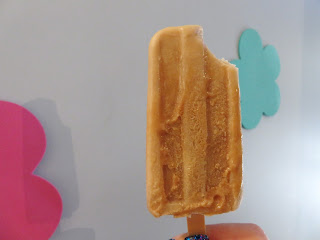 Lastly, the star of the evening was Sugar Bliss's new Ice Pops, which came in a variety of summery flavors like Key Lime, Watermelon, and Blackberry Mojito.  Every pop was jam packed with flavor and freshness that quite simply turned everyone present into a pack of sticky fingered children.  Bunny picked the Root Beer Float flavor for herself and smiled with every bite she took of the ice pop, memories of summer times past running freely through her mind. 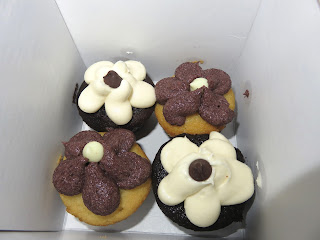 Having tried just about everything in the shop, Bunny gazed bleary eyed at the menu and noticed something incredible that caused her to reach for her phone and text Brandy.  "Two words," the message said, "Breakfast Cupcakes."  There was a short pause before the phone buzzed in Bunny's had with the reply, "On my way."

If you are looking for some sweet treats this summer, use the code POPSRUS on any order from Sugar Bliss now through July 31st to receive 10% off!

The writers of this blog were provided with access to a free media event that included samples of everything mentioned.