Snap Kitchen or Goodness to Go 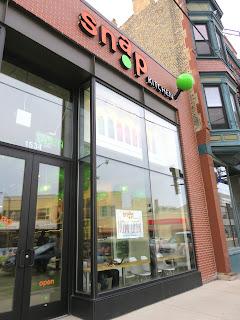 Years ago, the term "prepared foods" was whispered with a certain disdain, but in this modern world of hustle and bustle, prepared foods kitchens have become all the rage.  "I'm all for convenience, of course, but not if it means relinquishing flavor," Brandy commented with skepticism when she first heard of this trend, "If I can walk into a restaurant and be handed a high quality meal that looks good, tastes good, takes minutes to prepare, and just happens to be healthy... well, that's the dream, isn't it?" 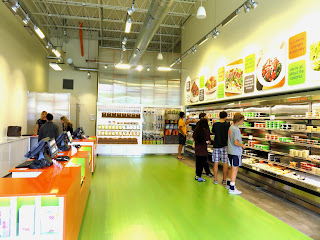 Recently making their debut with several locations across Chicago is Texas based Snap Kitchen, which specializes in prepared meals that take all of the guess work out of balancing nutrition and portion size.  Most everything they carry is gluten free and dairy free as well as being low in carbs and saturated fats, high in protein, and nutritionally balanced for all sorts of diets, and meals come in lots of different sizes as well to satisfy all appetites.  What Brandy liked most about the concept was that they carried options for every single meal, including breakfast, lunch, dinner, desserts, snacks, and even cold pressed juices, but still, she didn't quite know what to expect when she first set foot into the Lincoln Park location. 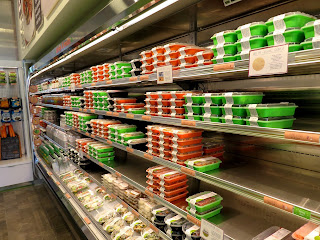 Snap Kitchen was easily navigated, having their meals stocked by type in color coded containers for size.  Against one wall was a collection of microwaves, where customers could heat up their meals right then and there and enjoy them at the seats near the window if they couldn't wait to get their meals home.  A sign also listed some of the local suppliers that had contributed to the meals, assuring customers that everything was sourced as locally as possible.  Quickly taking stock of the situation, Brandy dived in head first and selected a collection of meals to try for the week, then headed home with a bevy of little plastic containers. 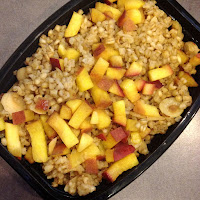 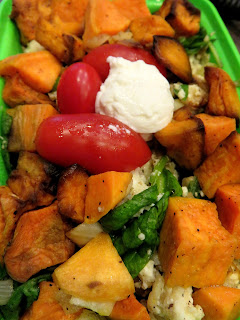 The breakfast dishes that Brandy chose included a Spinach Goat Cheese Scramble, a Peach Oatmeal, a Bison Bowl, and some Peanut Butter Pancakes.  Having been told that the meals were specifically designed to keep one full and satisfied, Brandy, whose appetite is legendary, was a little skeptical, to say the least.  "Perhaps one of these little containers is enough for most people, but I was brought up eating a Full English every morning, so I hardly think a bit of egg white and veggies will be enough to take me through lunch."  But much to her surprise, after sampling one of the breakfasts, Brandy found that not only was she satiated all the way until lunch, but she actually ate less at lunch than she normally would have!  The Bison Bowl was definitely her favorite of the breakfasts with its sweet and lean bison and apple sausage patties, but the Oatmeal with fresh peaches on top was a very close second.  The Peanut Butter Pancakes had a nice texture to them, not being too dense or too light, but didn't pack quite the peanut butter punch Brandy was hoping for, though with a bit of fresh fruit, they felt more complete.  The Goat Cheese Scramble was surprisingly hearty, being mostly made up of diced sweet potatoes along with the scrambled egg whites, spinach, and cherry tomatoes, and had nice little peaks of richness from the dollop of goat cheese on top. 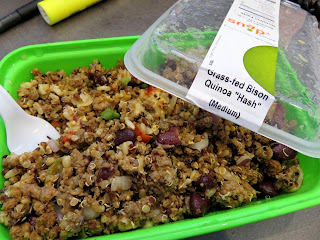 Her lunch entrees consisted of some Curried Chicken Salad and Bison Quinoa Hash.  The chicken salad was just lovely with a few pita chips, as it had just the right amount of spice and creaminess as well as a nice sweetness from the addition of some golden raisins and a bit of crunch from some finely chopped celery.  The Bison Quinoa Hash was another surprise, as Brandy had thought it might be a little bland, but was actually quite flavorful with a good dose of heat to it.  "A nice little side salad here and I could eat this for lunch every day!" Brandy exclaimed. 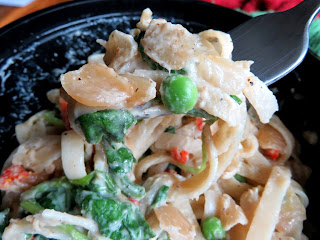 The dinner entrees she chose consisted of some Chicken Enchiladas, a Lamb Lasagna, and a Veggie Alfredo.  With the enchiladas, again the spice was just right, especially in the poblano cream that covered them, but Brandy did find the texture of the gluten free tortillas a little on the spongy side.  The lasagna was everything one could expect from such a homey dish: lots of bright tomato flavor from the home style sauce, perfect al dente pasta, and big chunks of still crisp veggies.  Brandy even swore she detected a cheesy flavor, though the dish was clearly labeled "Dairy Free."  As if that didn't confused her enough, the also dairy free Veggie Alfredo (which had a sauce made from cashews instead of cream) was totally mind blowing.  "If I didn't know better, I would have thought this was the most dairy filled thing I've ever tasted!" Brandy proclaimed with wonder.  Again, the pasta (which was gluten free, as had been the lasagna noodles) was the perfect texture, the sun-dried tomatoes and caramelized onions providing a lovely sweetness, and some snappy peas provided a little gilding to the lily. 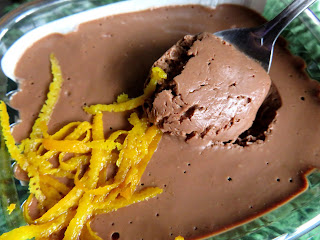 As Brandy simply cannot survive without a little dessert, she was quite pleased to have found a few indulgent treats among Snap Kitchen's offerings.  The Chocolate Mousse (which was again dairy free) was satisfyingly rich with a very smooth texture.  The flavor wasn't too sweet, which let the good quality dark chocolate flavor shine through, and the little bits of candied orange peel on top made it feel that much fancier.

By the end of the week, Brandy had to admit that her opinions on the prepared foods trend had swung strongly in the positive direction.  "It is quite nice to see one's fridge jam packed with meals that are healthy, filling, delicious, and require nothing more than a minute or two in the microwave.  Visiting a place like Snap Kitchen on a busy week could feasibly be very helpful and save a lot of time."  Though, as most of Brandy's time is spent chasing very unhealthy food across Chicago, perhaps its not such a good idea for her to have that much more of it.

The writers of this blog were provided with products from San Kitchen for sampling in order to facilitate the writing of this post. 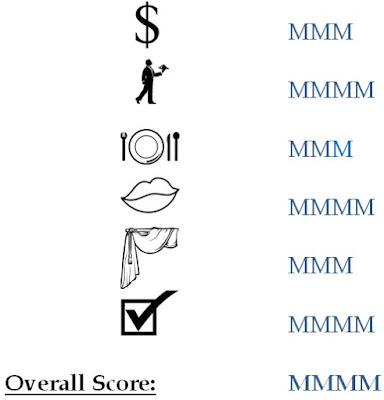