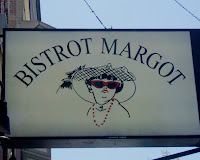 "Old Lady Chic" they call it, this trend of young hip people doing things like knitting, wearing over sized spectacles, drinking Side Cars and Lime Gimlets, or listening to Glen Miller and Frank Sinatra.  Brandy has never trusted this trend, suspecting that these young people may just be making fun of their elders or "appreciating them ironically," as she was lead to believe by a group of hipsters she once encountered.  "We take up knitting when we're old because we can," she always says, "Being young is the time for doing daring and stupid things, not making ill fitting jumpers." 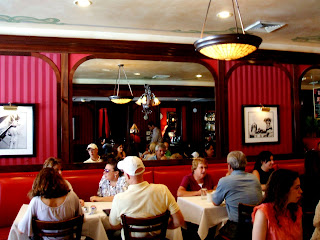 It was this annoyance with all things old and fashionable that lead Brandy to seek out a more traditional brunch destination, namely Bistrot Margot in Old Town, which promised the most traditional of French cuisine.  Although a lovely sidewalk porch had been set up, Brandy chose a table indoors among the red accented wallpaper, the dark wood fixtures, and the white linen tables.  She was glad to see the interior was fairly well spaced, though some tables seemed to allow for more room than others. 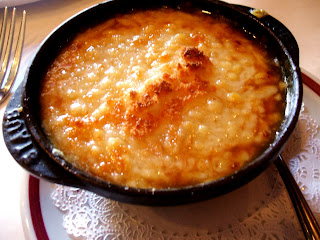 Right at the start she was brought some rather unremarkable bread and butter by the prompt, but unfriendly staff, which did not bode well for a lady who is used to more exciting fair like scones and banana bread to start off her brunch.  She ordered one of her favorites, French Onion Soup (though the writer of the menu had decided to list it as the hopelessly pretentious "SOUPE A L´OIGNON LYONNAISE."  As Brandy always says, "Making something French doesn't add class, it simply confuses the English.")  The soup itself was very good and sweeter than expected, though she did wish she had been given a bigger garlicky crouton, as the one she had only lasted about two bites. 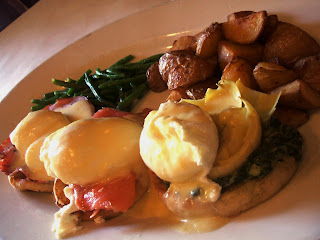 For her entree, Brandy chose to honor her dear Bunny and order a trio of Benedicts, which included a traditional one with Canadian Bacon, a nouveau one with Smoked Salmon, and a reinvented one with spinach and artichoke, all served with green beans and potatoes.  The traditional Benedict was just that... very traditional with a well poached egg, grilled meat, and light hollendaise.  The salmon one had a lovely smokey flavor, but was otherwise again very traditional.  The standout for Brandy was the spinach and artichoke, although she found the spinach mixture a little dry and the artichoke slightly cold and oddly tasting of liquorish.  The potatoes also had an odd sweetness that wasn't entirely unwelcome, and the green beans if not for being salty would have been fairly bland. 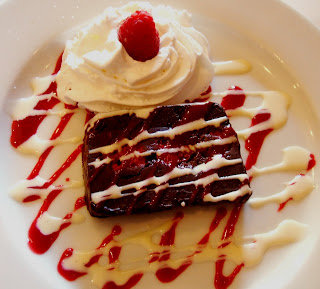 For dessert Brandy picked a terrine of chocolate, espresso, and raspberries.  The chocolate itself was fudgey, rather like a flourless chocolate cake, and the raspberries in the middle were brilliantly bright and zippy.  The only two disappointments in the dish were that 1) there was really no espresso flavor to be found, and 2) the whipped cream on the plate seemed to be from a can.  Hardly a French tradition.

By the end of this traditional meal, Brandy began to think the young might not be so bad.  "Old Lady Chic" and "Traditional French Cuisine" have their place in sentimentality, but there is a lot to be said for the new, the different, and the breaking of traditions.  Onto greener pastures, as they say. 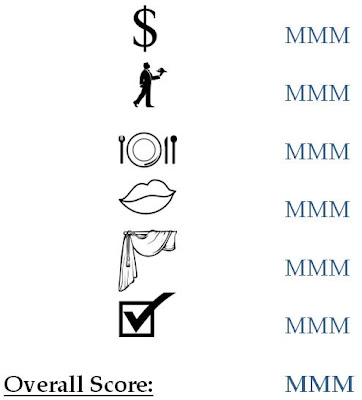