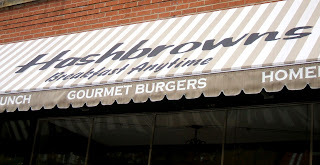 It been almost a year now since Brandy started her journey through Brunchland, and if there is one food she has had more often than all the others (more than French toast, and yes, more than benedicts) it has to be potatoes.  Served as an often neglected side, it seems no brunch dish is complete without some sort of potato offering.  Brandy has had potatoes in every which way: shredded, diced, fried, roasted, crispy, soggy, spicy, unseasoned, and everything from Idaho Russets to creamy reds.  Needless to say, there is not much in the world of potatoes that Brandy has not seen. 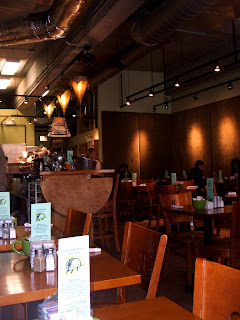 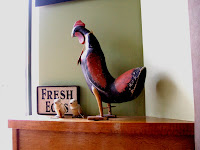 Except one thing, and that one thing was what drew her to Hashbrowns, perennial attendee of the Chicago Taste Festival and favorite amongst students at nearby UIC.  The first thing that struck her upon walking in the door of Hashbrowns was the extraordinary smell; something sort of cinnamony and meaty and comforting.  She was greeted by a smiling server like she was a regular of the establishment (and indeed Brandy heard this very server greet all her tables like this, even knowing people's orders before they could tell her what they desired).  The decor was a little more modern than Brandy expected, and perhaps a little bare and industrial looking, but with nice homey touches. 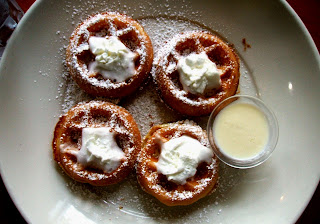 Brandy started off with an order of Mini Waffles, which came four to a plate, with whipped cream, powdered sugar, and a delicious vanilla sauce on the side for dipping.  The waffles were perfect in texture, with a nice crisp outside and a light, airy inside.  The sauce packed just the right punch of flavor, adding an almost fruity taste to the confections.  But as Brandy's eternal war cry goes, a few pieces of fruit would have done wonders to heighten the taste. 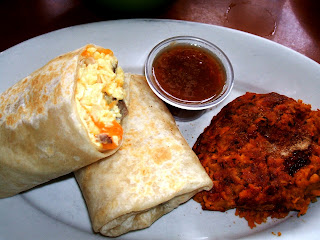 For her main course, Brandy chose the Brideport Burrito, a flour tortilla encasing scrambled eggs, cheese, and steak, which came served with her main reason for being there: sweet potato hashbrowns.  Never before in the sea of potatoes that is Brunch, has Brandy ever heard of such a thing, which is exactly why she had to try them.  The burrito itself, though the eggs were nicely fluffy and the cheese plentiful, was rather bland and dull.  The steak used wasn't tender at all and had absolutely no flavor to it.  The only saving grace was the side of house made salsa, which added a much needed kick to the dish.  The hashbrowns on the other hand were anything but flavorless.  Apparently the delicious smell Brandy had experienced upon entering stemmed from this lovely offering.  Though not as crispy as she had anticipated, the texture of the hashbrowns seemed to fall somewhere between mashed and diced.  A lovely sweetness came from the caramelized onions that were scattered through out, and the top of the mound seemed to glitter with sugar and cinnamon.  Brandy's favorite memories of Thanksgiving and Christmas came flooding back with every mouthful.

With friendly service on par with what television diners have taught us to expect, Hashbrowns certainly does make a newcomer feel right at home.  Their name sake dish definitely did not disappoint, and in fact left Brandy wishing she had ordered the "Hashbrown Platter," a mix of both traditional and sweet potato hashbrowns for sampling.  Perhaps next time, and if other restaurants keep serving up bland, over cooked, and soggy side potatoes, there most likely will be a next time! 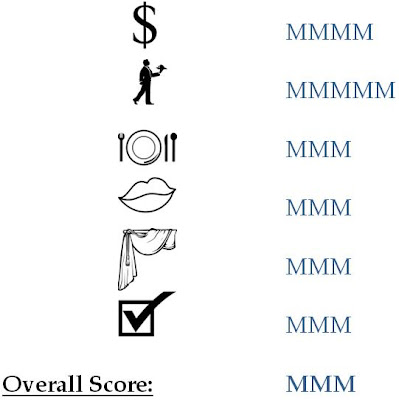 Posted by Bunny and Brandy at 6:27 AM