Street Food Festival or Alone in the Crowd 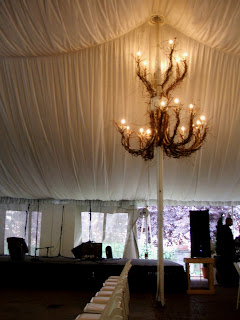 Its the beginning of a new era, friends, a radical new time where one lone food adventurer has wandered out into the vast metropolis that is Chicago to find the ultimate brunch destinations.  But having lost her dearest friend, Brandy thought it best to start her lonesome journey in a slightly different way.  Having heard some buzz about a new kind of food festival being held at Galleria Marchetti Brandy bought herself a $40 ticket (early bird tickets were cheaper, but sold out quickly, and there was also a VIP ticket option that opted the holder into cooking classes held throughout the day) and set out to carry on Bunny's legacy.

This food festival, creatively titled Street Food Artistry, was the first of its kind, celebrating the diversity of Chicago Food Trucks, street performers and urban artists.  A few paintings, splashed with more than an ounce of urbaness, were scattered around the reception hall, and different groups from tap dancers to musicians had been asked to perform throughout the day. 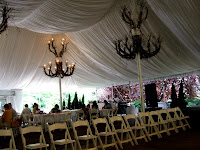 The interior of the space was a little more suited for a wedding than a food festival, with a large white tent housing sampling tables form several restaurants and local food companies, which was sandwiched by two lovely gardens that had been sprinkled with food trucks and food carts. 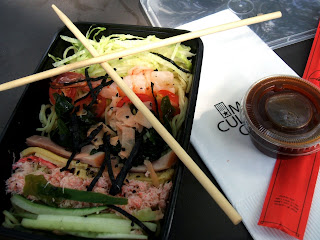 Brandy started outside with the star of the event, the Macy's A Go-Go Food Truck which had partnered with chef Takashi Yagihashi of Takashi (which Bunny and Brandy famously covered in a previous post).  She was given a lovely noodle salad by Chef Takashi himself and made herself comfortable at one of the out door tables (though her chair developed a nasty habit of sinking into the moist ground).  The dish was a little odd, being a mixture of a chef's salad with lettuce, tomato, and ham, and a chilled noodle salad with black mushrooms, cucumber, and shrimp  Brandy wished Chef Takashi had been allowed to serve something freshly made, but sadly Chicago has outlawed all cooking aboard anything with wheels. 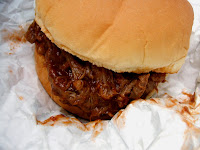 Next was the Bergstein's NY Deli Truck which was offering some selections of sliders.  Brandy chose a BBQ Beef Slider on the recommendation of the girl in the truck.  The sandwich was definitely one of the highlights of those gathered at the festival , which is saying something as nearly everyone had some sort of BBQ dish. 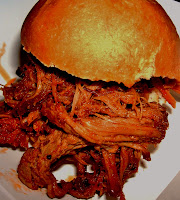 Inside the tent, Brandy joined the line for the restaurant samples, some of which already had food trucks and some of which were planning ones for the future.  First came English, which Brandy expected to be her favorite.  Unfortunately, all they had on offer was a BBQ chicken slider with a zingy but greasy sauce, hardly authentic English food.

Next was Wow Bao, Chicago's favorite bao bun chain with attitude.  They had brought along several of their most popular flavors, so Brandy chose an edamame bao, which proved pleasantly soft on the outside with crunchy veggies on the interior. 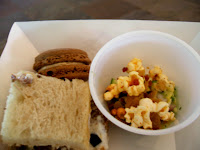 E.Leaven presented a full meal in bite size with their short rib sandwich, vegetable medly with popcorn (yes, dear readers, popcorn) and a mocha French macaroon.  While the vegetable dish was not particularly a hit with Brandy (she felt the popcorn had been made soggy and the whole effect was like a rather strange salsa), the sandwich was definitely the star on the plate, with tender meat, a succulent creamy sauce, and fresh baked bread.  The cookie was also a nice touch, though Brandy heard rumors that other plates had contained brownies with hot sauce in them! 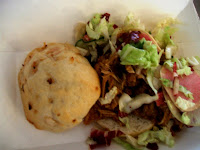 Following that, Bistro One West served up a pulled BBQ pork slider on a cheddar biscuit with a very colorful and crispy coleslaw.  By now, Brandy was a little BBQ-ed out, but she did like the slaw especially. 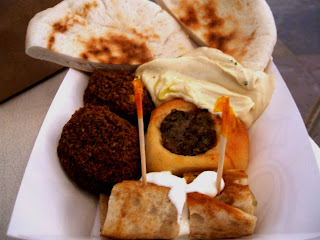 Last of the restaurant tables, Dawali presented Brandy with a huge plate of Mediterranean goodness.  A few falafel balls to start (which didn't have the crunch Brandy expected them to have), then a bite each of a chicken shawarma wrap and a beef shawarma wrap (the chicken was the winner of the two), then a pastry stuffed with ground lamb which had excellent spice, and a hearty helping of some incredibly creamy hummus with two pieces of supple pita bread.  And yet there was still more food to go! 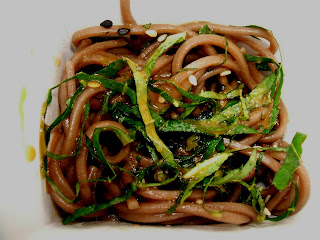 Out in the second garden was the Homage Street Food Truck, a group of new comers to the food truck game, who were sporting probably the most varied menu at the festival, with dishes from Puetro Rico, India, Viet Nam, and all over the world.  Brandy chose a Buckwheat Noodle dish that came served in a tiny take out container (Brandy amazed everyone with her chopstick dexterity).  The noodles were dressed with a sauce that was spicy, sweet, sour, and savory all at the same time.  Brandy supposed that they would have been a bit much as an entree, but were perfect in the sampling size.

Last but not least was the Puffs of Doom Cart which served artisanal cream puffs.  From traditional flavors like strawberry, chocolate, and peanut butter, to more exciting choices like Earl Grey and apricot basil, if seemed there was a cream puff for every taste bud.  Brandy chose the most unusual sounding one, which was based off a Mexican drink made with orange and spices.  The total effect of the confection reminded Brandy of Orange Spice Tea at Christmas time.  Brandy feels that desserts should always remind one of something happy, so in that respect, this was a total success.

A fantastic debut in all for the Street Food Artistry Festival.  The abundance of good food and lively entertainment did help Brandy to forget she was on her own for a little while.  But next week, we shall see how she does on her own at a more traditional brunch spot. 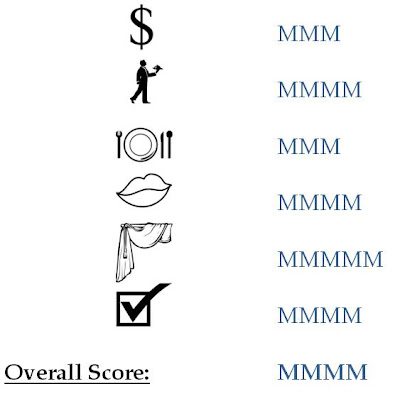 Posted by Bunny and Brandy at 8:43 AM