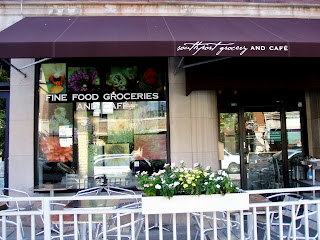 It has been said that multi-tasking is the true gift of woman kind.  For instance, Brandy is perfectly capable of reading a book, embroidering a table cloth, fixing her reading glasses, and baking the perfect chocolate cake, all at the same time and while enjoying a glass of her favorite wine, Cabernet Sauvigion.  Quite impressive for a days work for some, but for Brandy, this is an average evening (except for the chocolate cake... sometimes its Red Velvet). 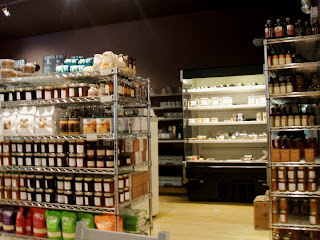 As as an epic multi-tasker, Brandy is always impressed by others who can out do her.  This is what led her to Southport Grocery and Cafe for brunch this week, a multi-tasking establishment that is not only a restaurant, not only a bakery, but also as the name implies a grocer of European and locally produced specialty goods.  The inside boasts about ten tables along one wall, a bakery counter along another, a kitchen at the back, and a line of shelves in the center.  Its not unusual for wait times on weekends to exceed an hour because of this lack of tables (though during the summer, the inside is supplemented by a small sidewalk patio), but luckily the grocery and bakery give one plenty to browse through, including their famous cupcakes.  Brandy chose to delay a trip to the bakery until after she was full of food, as she felt she might buy everything on offer.  Servers prove their expertise in multi-tasking by not only waiting tables, but helping keep the grocery and bakery stocked, which on a busy morning can mean fighting slightly for their attention. 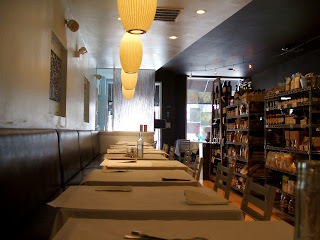 Once seated and refreshed by a glass of water (cutely served from a wine bottle into a mason jar) and some slightly weak iced tea, Brandy was ready to order.  A filling dish simply called "Hash" stood out, as well as the two pancakes on the menu; one made with the same batter used for the cupcakes, and another made from bread pudding.  Both pancakes had a "solo" option, allowing Brandy to order one of each to sample. 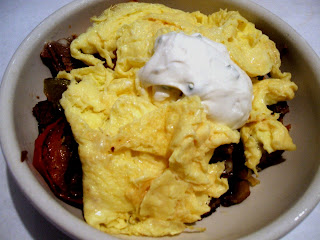 The Hash came as a hearty bowl containing crispy and cheesy hash browns, scrambled egg, and smokey onions, peppers, and mushrooms topped by sour cream and chives.  Brandy chose to add brisket to the mix, which seemed a perfect match for the roasted veggies.  Though she wished for a little more cheese, Brandy found everything about the Hash to be flavorful and brightly bold, from the fork tender brisket, to the charred bell peppers. 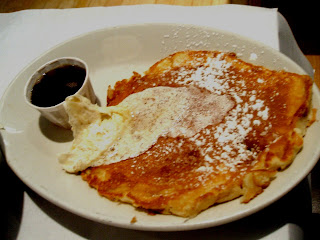 First of the pancakes was the Cupcake Pancake, served very traditionally with powdered sugar and maple syrup.  The extra sugar in the batter allowed the edges of the cake to crisp beautifully, but the texture was rather dry.  Still, not bad for a traditional pancake. 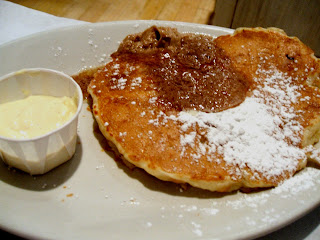 The second, the Bread Pudding Pancake, was the definite standout.  Looking traditional, this confection was anything but.  Though unassuming  to the eye, the dish came topped with cinnamon butter and served with a sort of custardy crème anglaise, which only served to gild the lily, so to speak.  The interior of this pancake was so soft and creamy, so silky and luxurious, that Brandy swore it must have been stuffed with cream cheese.  Normally, Brandy likes a bit of fruit (as you should have guessed by now) with her breakfast sweets, but in this case, she wanted nothing healthy anywhere near this decadent treat.  And its not as if the recipe is a secret, as the grocery sold bags of "Bread Pudding Pancake Mix" right there on the shelf across form her table!  Brandy thought about ordering a case of the mix, but re-considered after realizing she might never leave her house for brunch again, and she would never deprive her dearest fans of her culinary adventures!

Going to Southport Grocery on a week day might be more advisable to avoid the crowds, but even if you have to add your name to the waiting list and spend an hour in the neighborhood shopping at the many boutiques until you can be seated, your meal will be well worth the wait.  At the fairly reasonable prices (less than $25 for a filling breakfast for one) you'll have plenty of cash left over to raid the bakery and grocery shelves. 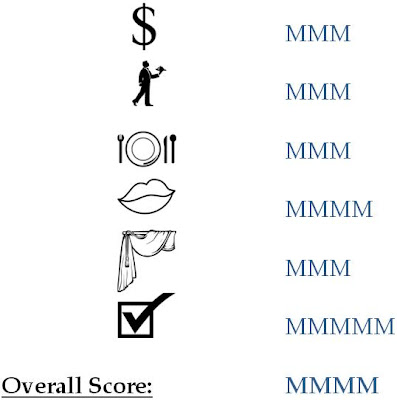 Posted by Bunny and Brandy at 8:16 AM