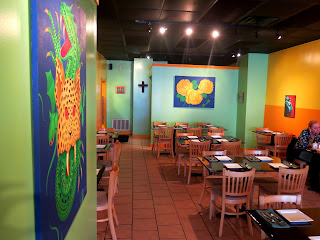 Because of her busy schedule, it's rare that Brandy can make time to visit a restaurant more than once, so when she does, it's a good indication of just how good the place must be. This was the case when she found out that one of her favorite discoveries from last year, Ixcateco Grill, had revamped their brunch menu of authentic Mexican staples and new innovations. Ixcateco picked up all sorts of accolades last year for being one of the best new restaurants in town, even expanding their brunch service into Saturdays as well as Sundays to accommodate their ravenous fans. "I know a good brunch when I see one, and I certainly saw one there," says Brandy, "I'll be interested to see what, if any, improvements have been made to an already stellar menu." And so, she brought along her friend Bailey Blue (promising her one of the best cups of coffee she would ever have) and headed to Albany Park to see what wonders Chef Anselmo Ramirez had in store. 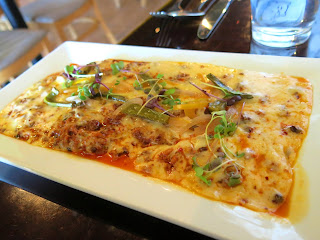 The meal started off with some classic Queso Fundido. This version had been dotted with bits of crispy house made chorizo, which not only made for a lovely contrast in texture to the stretchy Chihuahua cheese, but also gave everything a smokey flavor and a touch of heat. It also came topped with some pickled cactus, which added a nice brightness to the otherwise rich and indulgent dish. Brandy and Bailey had a grand old time piling the cheese mixture into some of the house made tortillas, so much so that they quickly ran out of them and had to borrow chips from the basket on her table to make sure every cheesy bite was consumed. 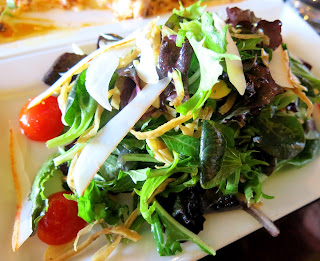 Next, Brandy and Bailey lightened things up with the house salad, or the Ensalada de la Casa. This version consisted of mixed greens topped with cherry tomatoes, almonds, Cincho queso, crispy corn tortilla strips, and a lemon dressing. The whole affair was quite crisp and refreshing, especially after the decadence and heat of the queso fundido, and Bailey rather liked how the tortilla strips added a nice crunch to each mouthful. Brandy actually found the salad a little disappointing, not because it wasn't good, but because it didn't seem as inspired as the rest of the menu. "It's just a run of the mill salad," she said with a sigh, "Lovely in it's own way, but not very inspired or interesting. I suppose I just have high flavor expectations, knowing what this place is capable of." 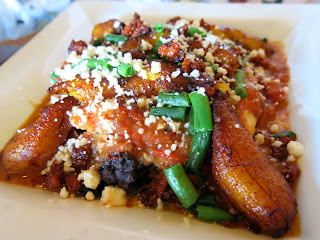 Bailey ordered the Huevos Motulenos for her main course, which was an interesting sounding hash made from black beans, green beans, ham, queso fresco, and plantains, topped with a fried egg and a Molcajete Sauce. "What is Molcajete Sauce?' Bailey had asked Brandy when she was trying to decide which dish to get. "It's a tomato based sauce prepared with a mortar and pestle," Brandy replied (after covertly Googling the answer on her phone). The dish certainly had a nice roasted tomato flavor with a little tang and a little sweetness. Bailey loved all the various textures of the ingredients blending together to make each bite unique. Her special favorite on the plate was the caramelized plantains, which she had to scoot to the center of her plate to keep Brandy from stealing bites of them. 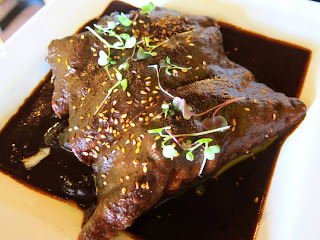 Brandy had picked the Enchiladas de Mole Negro, which came slathered in a black mole sauce and filled with slow roasted pulled chicken meat. Brandy just loved the deep flavor of the black mole, which had a slow heat that really lent itself to the overall flavor, rather than impairing it. The chicken inside the enchiladas was very tender indeed, but Brandy felt it could have used a little something else to add some textural variety. "Regardless, this mole is so delicious that I barely care what it's covering," said Brandy.

Pleased to see that Ixcateco Grill was continuing to chug along in the right direction with their home style authentic Mexican dishes. "Wait, we can't leave yet," said Bailey as Brandy was gathering up her coat and purse. "You can't still be hungry?" Brandy questioned her friend. "I'm not," said Bailey,"But I do need another cup of that amazing coffee!"

The writers of this blog were invited to dine at the restaurant free of charge in exchange for an honest review.
Posted by Bunny and Brandy at 11:17 AM