With spring in the air and a spring in her step, Brandy was feeling light as a feather. "The weather may be manic and the world may be crumbling to pieces, but there's always happiness to be found if one looks hard enough," was Brandy's sentiment of the day. She decided to take her energy for a walk around the Gold Coast and do a bit of window shopping and people watching. The streets were teaming with the happy faces of those who had come outside to see some long awaited sunshine and Brandy gleefully wandered up and down Michigan Avenue amongst them for quite some time, that is until she began to feel a bit peckish. Glancing up, she realized she was right below the Grand Lux Cafe, a recent favorite brunch destination, so she decided to head upstairs to grab a seat near the window and continue her people watching from afar. 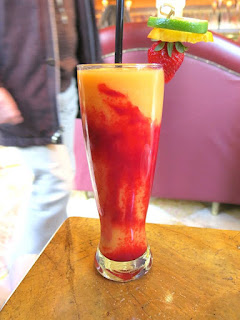 Settling into the gorgeously decorated space, Brandy examined the menu. Skipping over the cocktails for once, she ordered the Mango Raspberry Swirl smoothie. For something non-alcoholic, the drink was presented beautifully, with a vibrant red puree blended into the orange-yellow drink. The flavor was refreshing and fruity without being overly sweet. It didn't exactly taste like a healthy type of smoothie, but it wasn't a decadent as a milk shake either. "Just the perfect little bit of sipable sunshine," Brandy smiled to herself, now feeling slightly uncomfortable with her own uncharacteristic cheeriness.

A pair of appetizers in the form of the Pastrami Reuben Eggs Rolls and the Asian Nachos were the next things to the table. The egg rolls were a rather delightful fusion of Eastern and Western cuisine, with a crispy skin on the outside and melty Swiss cheese, salty pastrami, and tangy sauerkraut on the inside, and a side of Thousand Island dressing for dipping. The rolls were a tad greasy, but still very crisp with a true Reuben flavor that Brandy was both infatuated with and befuddled by. "I'm not sure a born and bred New Yorker would be happy with one of their signature dishes being transfigured into such an interesting form, but then again, New Yorkers aren't usually pleased by much." 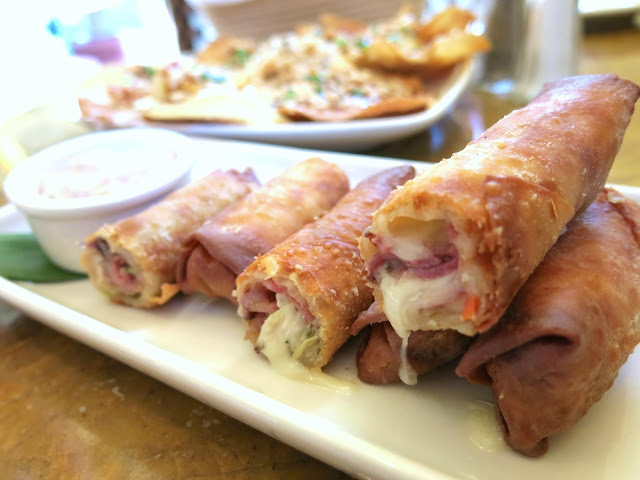 Next up, the Asian Nachos, another international fusion, with crisped wontons serving as the chips and green onions, melted cheese, peanuts, and a spicy wasabi cream. The dish also came with a mound of Mexican fried rice, which had corn and beans mixed in. While she thought the rice side dish was a little unnecessary, the chips themselves were amazingly flavorful with a great balance between sweet, savory, and spicy. Though a little unwieldy to consume, Brandy thought these in particular would also make for a wonderful happy hour snack for a table full of friends who wanted to catch up over a few beers. "Happy hour and brunch are really cousins, in a way," she reasoned, "What with happy hour not quite being lunch or dinner. It's no wonder there would be some cross over between some of the best suited dishes." 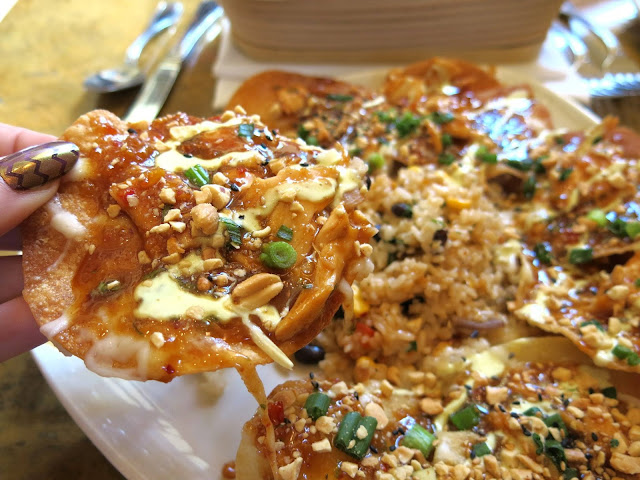 Keeping with the theme of crispiness, Brandy next chowed down on an order of Chilaquiles, which came dressed with scrambled eggs, avocado, pepper, onions, tomatoes, corn, beans, cilantro, and cheese. The resulting mix was a little overwhelming at first, but with every bite being a little different, Brandy actually found it to be quite an interesting version of the Mexican classic breakfast dish. The spice level was bordering on being a little high for Brandy's liking, but sips of the mango smoothie helped to tame it. The most impressive thing was how crisp the chips remained under the weight of all of the veggies and eggs, a telltale sign of a good chilaquiles in Brandy's book. 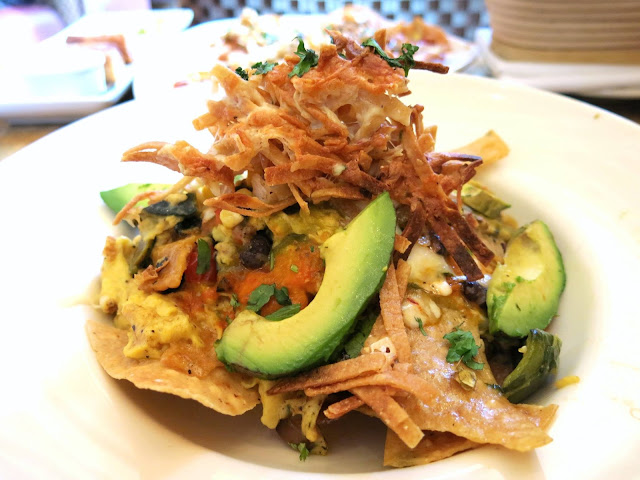 Finally, in honor of the upcoming holiday, National Waffle Day on March 25th, Brandy ordered the Fried Chicken and Waffles, which came served with a butter maple syrup and chopped pecans. The waffle was perfectly fluffy and light with a slight crisp to the edges. The chicken had a substantial breading and a nice hit of pepper to it. The syrup, though, was the thing that really sealed the deal by adding a light caramel-like flavor to cut through the savoriness of the chicken. Brandy loved the syrup so much that she actually emptied out the tiny carafe, something she doesn't normally do when presented with a side of sauce. Her only criticism was that she could have done with a little side of fruit to help break up the richness of the dish, but otherwise, she couldn't imagine a better way to celebrate National Waffle Day, even if it was a little early. 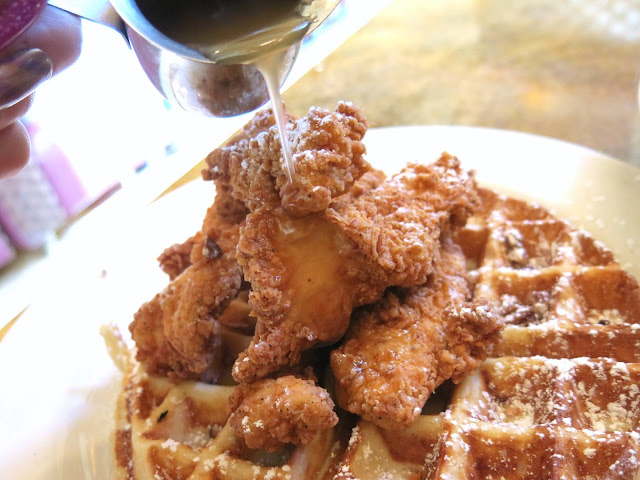 Having taken her sweet time, savoring all of the dishes as she let her mind wander, Brandy headed out of Grand Lux Cafe not exactly feeling as light as a feather any more, but still feeling rather cheerful. "I wish every day was National Waffle Day," she was heard to sigh into the wind.

The writers of this blog were invited to dine at the restaurant free of charge in order to facilitate the writing of this post.
Posted by Bunny and Brandy at 11:38 AM