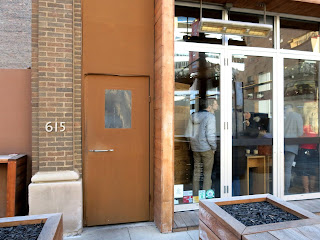 Back when 2017 was fresh and full of hope, Brandy learned of the exciting collaboration series Avec was running through April, in which they were inviting chefs from various other restaurants and breweries to come in and produce some unique fusions between their styles and Avec's existing brunch menu. "If there's one thing I adore, it's collaboration," said Brandy at the time, "Creative people reaching out with what they each bring to the table and coming up with an entirely new idea that never would have existed otherwise. Why, that's the very spirit that brought Bunny and I together to start this bloggy thingamajig." 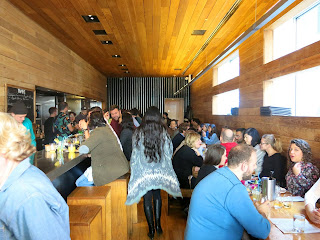 Having not been to Avec at that point, Brandy decided she needed to remedy that situation post haste and picked the weekend in which Lost Lake would be bringing their unique take on Polynesian cuisine and tiki cocktails. With Bunny not being in town, Brandy had to enlist another collaborator of her's, Starr, to come along and sample what the busy West Loop restaurant had in store.

Avec was a true little shoebox of a restaurant, but the space had been used somewhat efficiently to pack in as many diners as comfortably possible. Starr and Brandy took seats at the metal counter so that they could watch Paul McGee, the mastermind behind Lost Lake, work his magic. Though a little cramped and a little noisy, the room was generally in a bright mood, helped along by the small squadron of smiling servers and food runners who knew the menu up, down, sideways, and in every other dimension. "I'm not certain I'd come here with a large group of people," Brandy observed, "But it's not so bad for a couple of chums out for a morning on the town." 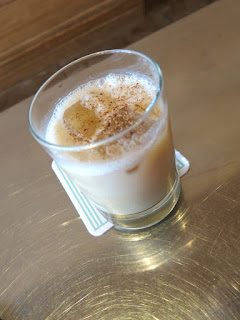 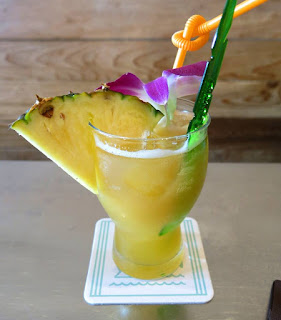 Picking two drinks from the Lost Lake side of the menu, Brandy and Starr watched on as the master himself mixed them up from behind the narrow bar. Brandy had chosen the Fish Eating Fish, a typically tropical tiki cocktail with Jamaican rum, pineapple, passion fruit, and a few other liquids. The look of the thing was absolutely delightful, coming adorned with a wedge of pineapple, a Lost Lake drink stir, a twisty straw, and a beautiful orchid. The flavor was as sweet and fruity as it looked, but it was well balanced with a touch of sour that made it more sophisticated than someone not familiar with Paul McGee's expertise might expect. Starr had picked the Tiger's Milk, which visually wasn't as exciting, but flavor wise delivered completely with a smooth, creamy texture and a caramel-like rum flavor with a hint of toasty coffee. 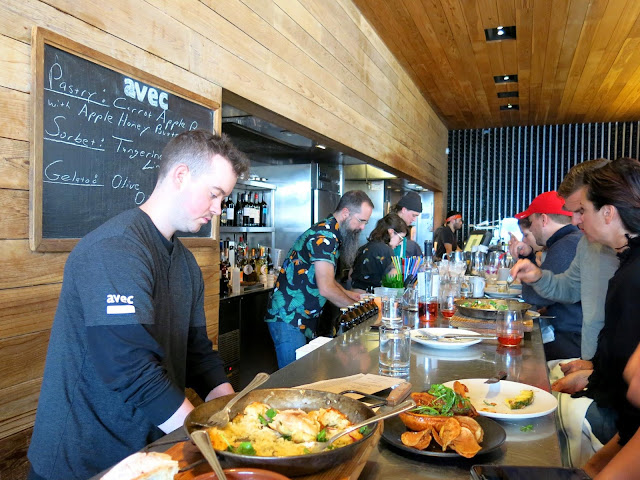 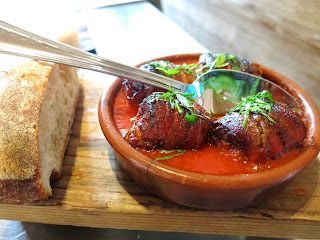 For their food, Brandy and Starr stuck to the Avec side of the menu, starting off with their signature Medjool Dates. The little bacon wrapped jewels came stuffed with chorizo and smothered in a piquillo pepper and tomato sauce (with a side of bread to sop up all that deliciousness). The dates were the perfect mix of sweet, savory, and spice with a slow heat that built in a very pleasant way. They were certainly satisfyingly meaty, but also more complex than a typical bacon wrapped date. "Even though this is available on their regular dinner menu," Brandy commented, "These dates are an example of a perfect brunch dish. Veg and meat, sweet and savory, shareable, and interactive. So perfect."

Loving the flavor of the dates so much, Starr decided to order the Avec Burger, which took the same flavor profile and translated it into an American standard. The burger itself was infused with the same chorizo and then topped with bacon, a date mostardo, and a piquillo pepper aioli. Rather than being an exact copy of the dates, the burger actually proved to be a nice accompaniment to them. The patty was a little dense and dry due to the chorizo, but was still pretty tender. The initial sweetness of the dates gave way to a bold, meaty flavor and the same slow spice that felt so good on a cold winter morning. As a side dish, Starr enjoyed the Papas Bravas, which was a skillet full of crispy potatoes drizzled with a garlic aioli and topped with a sprinkle of herbs. The potatoes had a wonderful crunchy exterior and a subtle spice to them, which made them rather a unique side dish. "If there's one thing I've had my fill of, it's boring potatoes," said Brandy, who had stolen a bite, "But these have quite an unusual flavor to them. It's good to see side dishes not being ignored in the scheme of things." 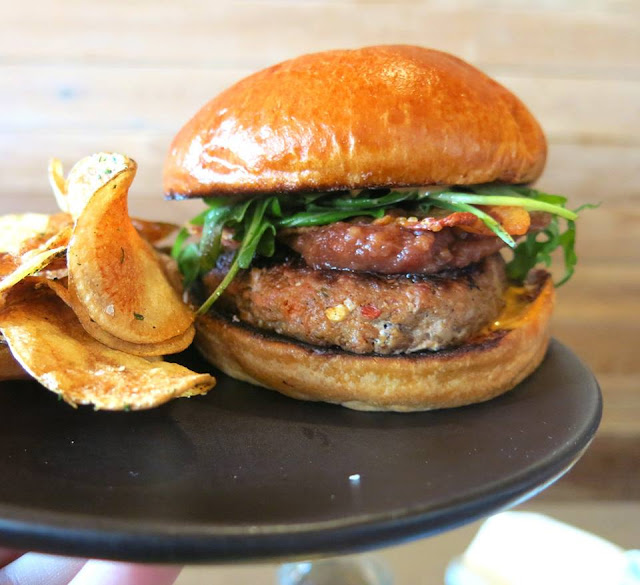 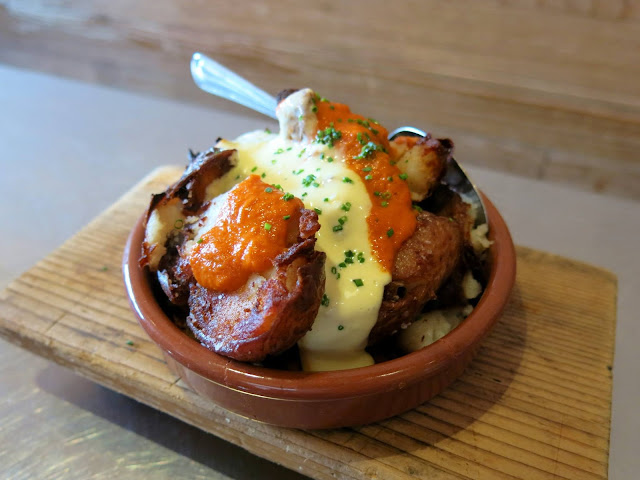 Brandy picked the Pizza Carbonara, which came dressed with garlic, arugula, guanciale, and a couple of poached eggs. The crust of the pizza was impossibly thin with a perfect crisp and a really nice chew at the thicker parts. More of a flatbread than a pizza really, the quality of the ingredients were clearly being showcased with the pure flavor of the cheese and the bacon really coming through without being too rich or heavy. "In fact, I find this a rather refreshing and light dish, which is surprising for something that comes topped with bacon and cheese!" said Brandy. For her side, she indulged in even more meaty goodness in the form of some Sumac Glazed Pork Belly. The pork was incredibly tender and sweet with a really unique herbal after taste that solidified it as one of the best "sides of bacon" Brandy and Starr had ever tasted. 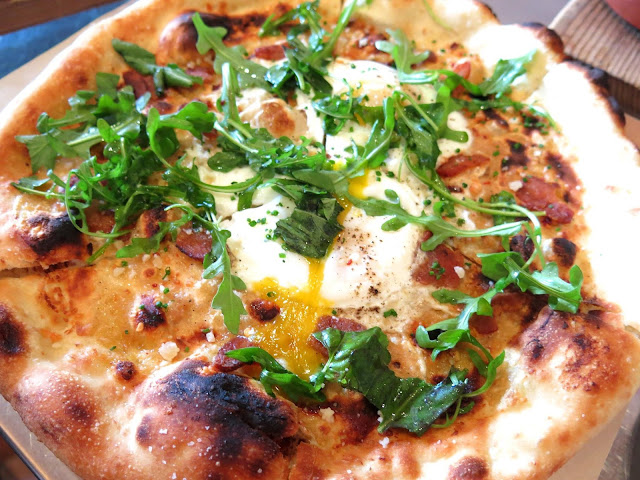 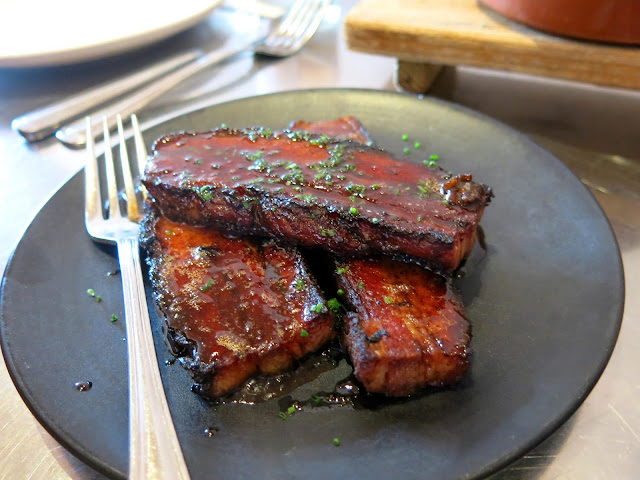 Finally, they decided to end the meal with a touch of sweetness in the form of the Oven Baked French Toast. This unique plate came with sliced almonds, mint, whipped cream, and a meyer lemon compote, all loaded onto wedges of custard soaked house made bread. The texture of the French toast was much more like a bread pudding to Brandy, with a spongy, airy feel to it, rather than a crisp and chewy one. The flavor was not overtly sweet, but actually had an herbal flair with touches of bright citrus and toasty nuts. "Not a typical French toast to be sure," said Brandy, "But certainly one of the most well dressed ones I've ever seen!" 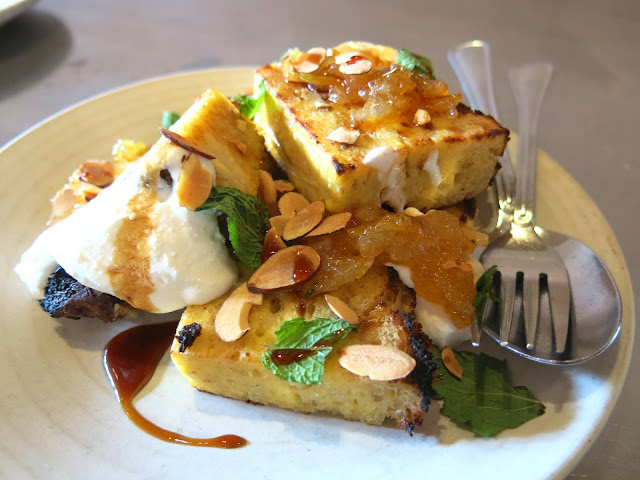 Squeezing their way towards the door, Brandy and Starr were already feeling the effects of the massive amount of meat and carbs they had just ingested. "I may need to take a nap in the car before I drive us home," said Starr with a giggle. Looking back at the unassuming edifice of Avec, Brandy reflected on the slightly chaotic, yet eye opening meal. The thing that surprised her most was perhaps just how affordable everything had been, especially when considering the portion sizes, the quality of the ingredients, and the inventiveness of the dishes. "You know, I thought this brunch would be all about seeing a couple of chefs collaborating, but I think I just realized something. Brunch is not just the collaboration of sweet and savory or breakfast and lunch. It's also a collaboration between those consuming the meal." "You mean because you can sample a little bit of everything by stealing bites off your friend's plates?" Starr asked, to which Brandy only grinned mischievously and got in the car. 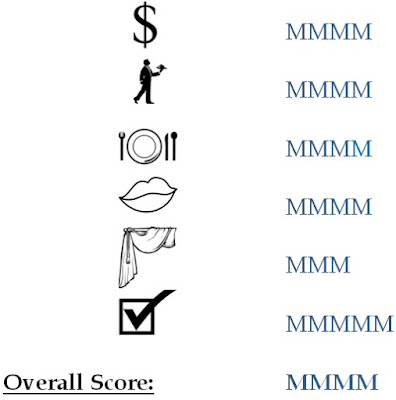