The General or American Pie 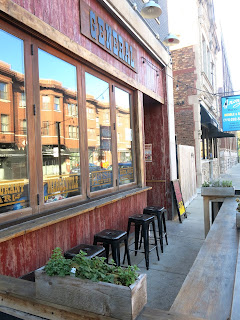 Thanksgiving, more than any other time of year, gives Brandy a taste for all things American. "When I think of America, I don't think of flag waving or fireworks or cowboy hats," says Brandy, "I think of good hearted, hard working people who like a bit of twang in their music and a heaping plate full of deliciousness. Perhaps that is why I think Thanksgiving defines the heart of America more than any other holiday." 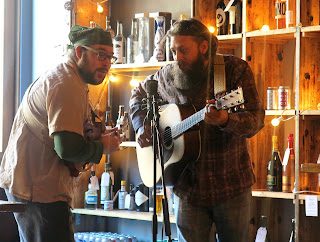 In preparation for her America honoring Thanksgiving binge, Brandy decided to visit The General, who host a Bluegrass Brunch every Saturday. The very idea of a menu of homey favorites combined with live music, hand crafted cocktails, and best of all, home made pie made Brandy feel warm and fuzzy. Grabbing an authentic American to accompany her (i.e. her good friend Starr) Brandy headed down to the country style mercantile in the heart of Logan Square. 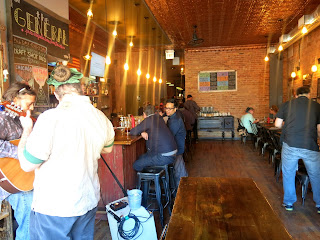 The General, true to its name, had a genuine country store vibe that was charming without seeming hokey. The walls were exposed brick, the tables were warm, worn wood, the lights were rustic, and chalk boards adorned the walls, announcing various specials and drinks. "It feels like a little piece of the country right here in the middle of the city," Brandy grinned. Beside the bar and in front of a large shelving unit holding various bottles of soda, beer, and liquor were stationed two musicians, playing and singing an enchanting bluegrass tune to the delight of the small, but energetic crowd. 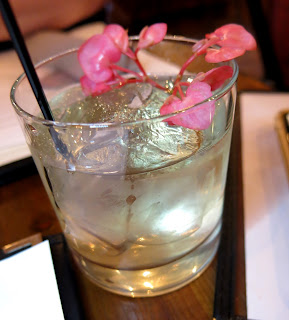 Starting off with a cocktail, both Brandy and Starr zeroed in on a concoction known as The Centennial, a combination of rum, bourbon, cognac, pineapple, baking spices, and a clarified milk punch. The first sip was absolute bliss. Sweet, with a floral, almost cherry blossom like flavor that ended in a warm, smooth spice, The Centennial was perhaps one of the best cocktails Brandy has had in the last year. "It tastes like liquid love," she sighed. The cocktail was so good, in fact, that upon finishing it, Brandy did something unprecedented and ordered a second one as opposed to trying another cocktail. "Every once in a while I try something so good that it positively blinds me to the rest of what's on offer. This is one of those times." 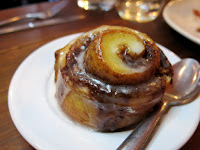 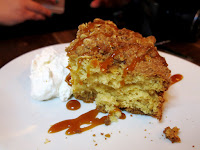 Brandy and Starr then started their meal off with a couple of freshly baked sweets; a cinnamon roll and a slice of coffee cake. The cinnamon roll was everything one could ask for-warm, gooey, and super sweet, but the coffee cake was a bit of a standout for its truly unique texture. "It's almost like cornbread," Starr commented, and Brandy agreed. The cake was a little more dry than a typical coffee cake with a cornmeal flavor and a truly scrumptious caramel sauce drizzled over the top. "I don't know that I've ever had a coffee cake quite like this," Brandy puzzled, "But I think I'd like to have one like this again." 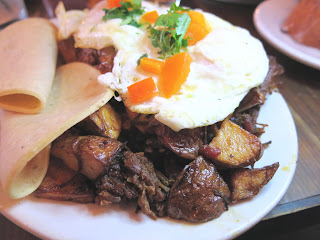 For her entree, Starr picked the Farmer's Hash with smoked brisket and a sunny side up egg. The meat was incredibly smokey and tender with a deep flavor that reminded them both of the Southern delicacy known as "burnt ends." A sprinkle of the house made hot sauce served to kick things up a notch or two, but Brandy was delighted to learn that the hot sauce was more than just pure heat. "I'm all for hot sauce that adds flavor and not just a thrill factor," said Starr. The potatoes on the side were also a nice addition, being perfectly crisp on the outside and well seasoned. Starr also liked that the brisket came served with two house made tortillas, which were a bit thicker than a typical tortilla, and as such served the same sort of a roll a slice of toast might have done elsewhere. 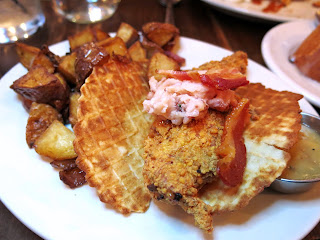 Brandy went for the Chicken and Waffle Tacos, a deliciously inventive combination of two very different dishes. The tortilla on the taco was actually a waffle cone-like structure, filling with a raspberry butter, bacon, a deep fried slice of chicken breast, and drizzled with maple syrup. Brandy could have easily eaten several more of these finger licking tacos, not only because they were the perfect combination of sweet and savory (for those wishing to add more savory, they also came served with a side of spicy chorizo gravy), but also because the chicken was incredibly juicy with the perfect kind of crunch to it. "I never thought I could love a plate of chicken and waffles more," said Brandy, "But this gives one all of the flavor without the heaviness of consuming an entire waffle. It's simply genius!" 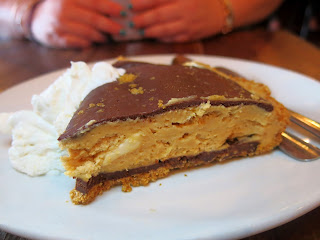 Finally, they decided to end their epic meal with one more taste of sweetness in the form of a slice of home made Peanut Butter Chocolate Pie. "It's actually made by our bartender," the smiling server told Starr and Brandy. "How wonderful!" Brandy exclaimed, "If she makes a pie anything like she made this cocktail, we may need to take a few slices home!" Their expectations were certainly met in the dense, peanut buttery pie, which was topped with a thick layer of chocolate and nestled in a cookie crumb crust. "This is certainly not for the faint of heart," Brandy laughed, languishing in small bites so as to extend the experience of consuming the rich, creamy masterpiece.

"This place is precisely what I love about Americana," Brandy said as they reluctantly prepared to leave the restaurant, "Everything paced for the slow, engaging creation of memories rather than a rushed, manufactured experience. This is the kind of place that makes one feel as thought they've been catered to by friends or family, not just the workers of a dime a dozen bar and restaurant. This is a place that makes one feel good for having come there." The prices seemed reasonable enough and the plating might not have been the most spectacular she'd ever seen, but the soul filling sense of bliss Brandy felt after dining at The General didn't come along every day. "I feel as though I owe them a meal now!" Brandy exclaimed, "Say, do you think it would be odd if I invited the entire staff to my home for Thanksgiving?" "Just make sure you ask them to bring the pie," said Starr. 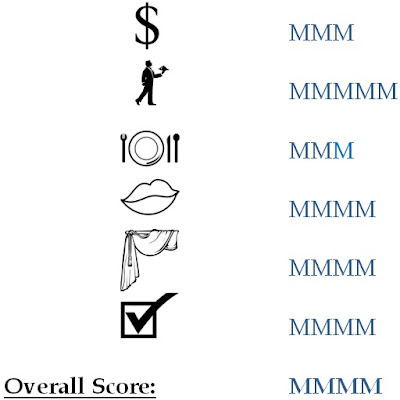