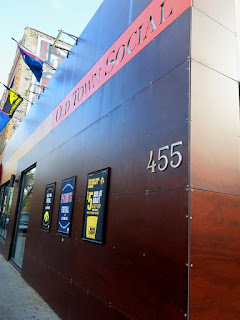 Brandy's quest to learn to appreciate the Bloody Mary has been a long and arduous journey. "It's a brunch staple, so I feel terrible turning my nose up at the thing, but I simply don't understand the appeal." "Well, now a days, its all about what comes with the drink," said her friend Bailey, who has been Brandy's surrogate Bloody Mary connoisseur for some time now, "People are less worried about the actual flavor of the mix and more concerned with topping them with outrageous stuff, like a slice of pizza or a whole roasted chicken." "One would think that both deliciousness and outrageousness could be achieved simultaneously and not have to be mutually exclusive," Brandy mumbled. 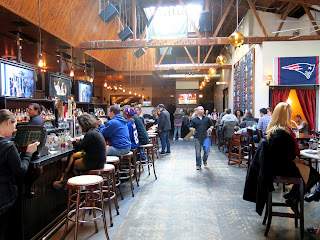 Then came the day Brandy learned of a rather extraordinary offering at Old Town Social: a 99 ingredient Bloody Mary bar. "This must be the kind of thing Bailey was talking about," she said to noone in particular. "Sure, you can dress up the drink all you want with doodads and whatsits, but will it actually taste good? Only one way to find out!" And so, grabbing Bailey and forcing her out into the crisp fall air, Brandy headed down to the bar to see if DIY-ing one's own cocktail into a thing of Instagram dreams could also result in a drink Brandy would actually be able to consume.

Old Town Social had a hunting lodge sort of feel to it, with high vaulted ceilings, lots of eclectic decorations, and mismatched woods and metals, yet it still had the feel of a comfy sports bar where one could easily settle in for the long haul of a football game. 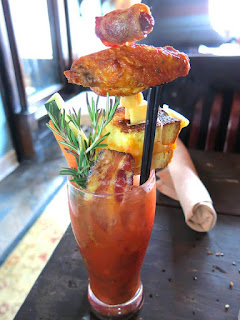 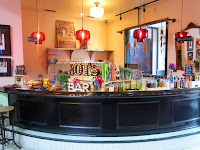 The Hangar 1 Vodka Bloody Mary Bar was, of course, the centerpiece of the Game Day brunch service. From a variety of sauces, pickled veggies, meats, cheeses, herbs, and even a few oddly chosen snack foods, one could create a Bloody Mary so customized that it likely had never existed before and might never exist again. Brandy was a bit overwhelmed at first when she was handed her glass full of Hangar 1 vodka and ice and told to "have at it," but she soon got a picture for the kinds of flavors she wanted to bring out in her beverage. Leaning towards savory rather than spicy, Brandy added in elements like Worcestershire sauce, brown mustard, pickled onions, and crisp sticks of fresh carrot and cucumber. She then adorned her creation with rosemary sprigs to give it an herbal flair, and finally gilded her lily with a chicken wing, a quarter of a grilled cheese sandwich, and two strips of maple bacon. The end result was a flavor she quite enjoyed. "It's sort of like a beef stew in a glass," she commented to Bailey, who actually approved of Brandy's creation. Bailey went a bit more traditional with her drink, staying on the side of vinegared tartness with a little kick of spice from a good sprinkling of lemon pepper. 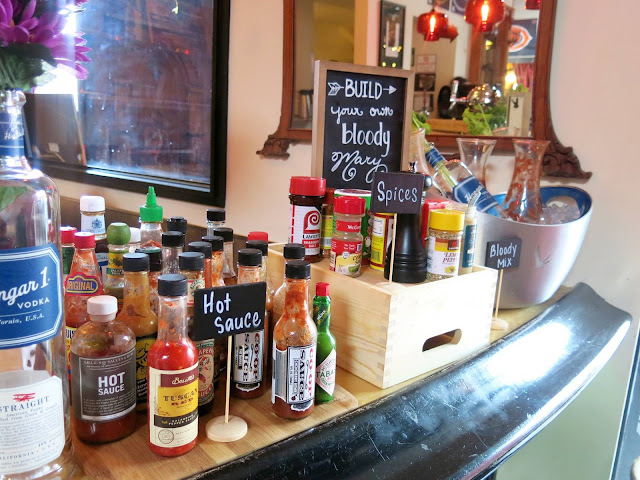 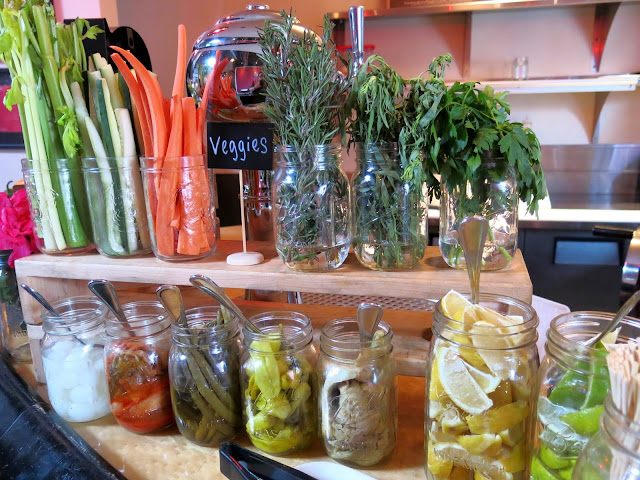 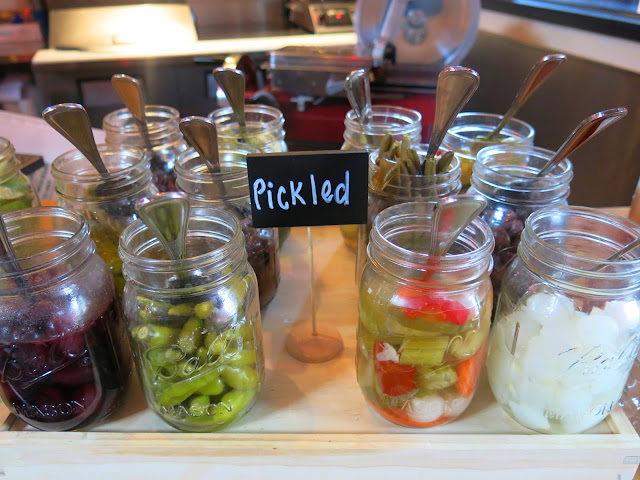 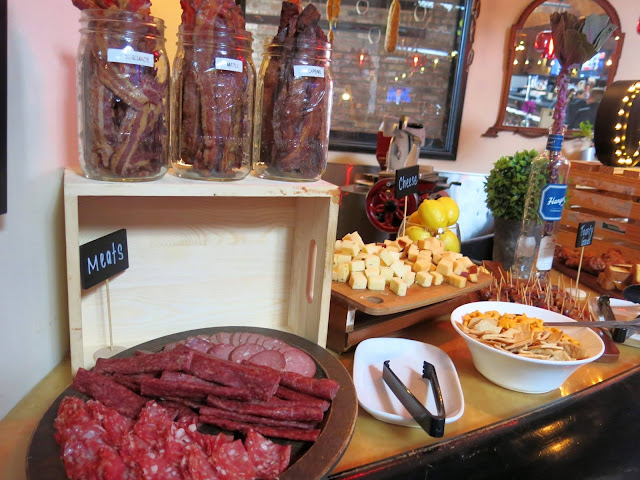 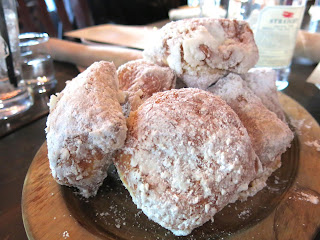 A round of delicious looking beignets soon made their way to the table, frosted in a snow fall of powdered sugar. Brandy made sure to grab one up while it was still warm so as to indulge in the full experience of biting into a fluffy, melty, airy little pillow of fried dough. "This is everything I would expect from a beignet," she sighed, "Perfect texture, perfect sweetness. A lovely way to start off a meal." "Sorry, what?" said Bailey, who was busy stuffing a second beignet in her mouth while watching the football game on the screen behind Brandy. 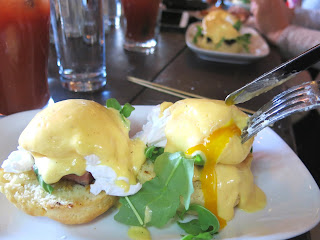 For her entree, Bailey picked the Benedict, which came with an herbed hollandaise, pork belly, arugula, and a fresh made buttermilk biscuit. "I really love the hollandaise on this one," Bailey commented, "And with the biscuit instead of an English muffin, it almost makes this more Southern than anything else." Bailey also enjoyed a side of potato casserole, a smooth blend of potatoes, cheese, and onions, all served in a mini cast iron pan, which she thought made for a nice change of pace from the usual kinds of roasted and skillet potatoes served at brunch. 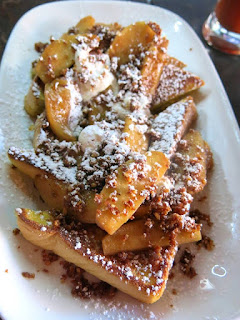 Brandy decided to keep things sweet to balance out her savory drink by ordering the French Toast. This consisted of thick slices of eggy bread topped with tart and caramelized granny smith apples, a good sprinkling of cinnamon, and a crunchy pecan crumble. Brandy thought the flavor of the French toast was absolutely perfect for fall. The apples kept everything from getting too sweet, while the crumble really helped to make the textures more interesting throughout the eating of the dish.

"Well, I suppose it is possible to have an aesthetically pleasing drink as well as a palate pleasing one," Brandy commented as she attempted to distract Bailey from the football game on the screen, "And by being able to customize it to my liking, I think I actually created a Bloody Mary I wouldn't mind having again." "I like that they kept the food menu somewhat uncomplicated so that we could really go ham on the Bloody Mary's without feeling too overwhelmed," said Bailey. "Did you go ham with yours?" Brandy asked, "Because I went bacon with mine!" 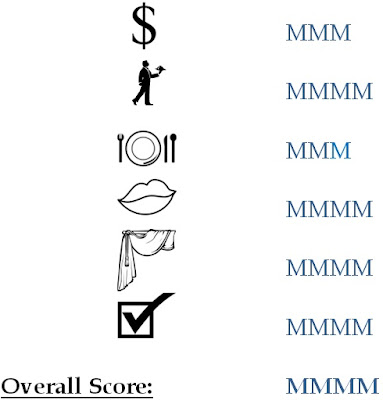