Taco Joint or Brunching Away in Margaritaville 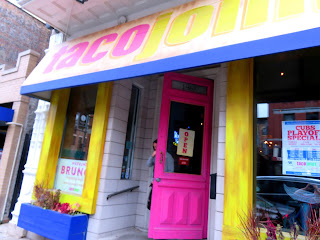 Oh, the ever present bottomless brunch. Chicago seems to be enamored with the practice, but Brandy's not entirely convinced it's a good idea. "Obviously, I'm hardly opposed to a cocktail or two at brunch, but do they really need to be bottomless?" she's been known to question, "If the deal works out in my favor, of course I'm happy to continuously sip until my heart's content, but that isn't always the case."

Hearing that Taco Joint in Lincoln Park was hosting one such bottomless brunch, Brandy decided to examine this phenomenon a little more closely, accompanied by her good friend Starr. The brunch was housed in the space that was The Mexican, where Bunny once had occasion to stop in for a delightful dinner. The decor hadn't changed much from a year ago, with the same bright pops of color and exposed brick, but the vibe had transition from rustic to more cool and relaxed, with the traditional tables having been replaced by high tops, stools, and communal seating. 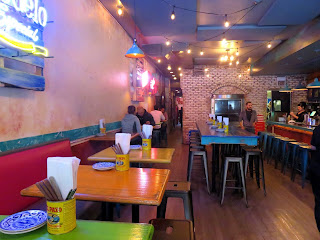 The first thing that struck Brandy about the bottomless cocktail options was that there were quite a few tempting choices, from bloody mary's and sangria to palomas and margaritas. Individually priced, the cocktails came in around $9 or $10, but when packaged with one entree (all priced at $11 individually) as a bottomless option, the total price came out to $32 per person. "That means we'd need to drink at least three cocktails each to make this a really good deal," Brandy calculated. "It's not impossible, but it does seem like a lofty goal," Starr commented. 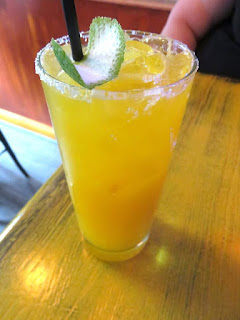 Starr opted for the Mango and Passion Fruit Margarita. The concoction was pretty pungently fruity, but certainly not offensive. "Whoo! That'll wake you up in the morning!" Starr proclaimed as she took her first sip. Brandy, seeing Colectivo Coffee listed among the bottomless beverage options, assumed it must have an added shot of some sort of alcohol, and needing a little pick-me-up of her own, decided on that course of action. Sadly, though the coffee was strong and delicious, it didn't seem to have anything special to it, which was a bit confusing, considering its listing on the menu. "Oh well, I'll just have to be the control in this little experiment of ours," Brandy said, "Let's see just how many cocktails you can get through in two hours." 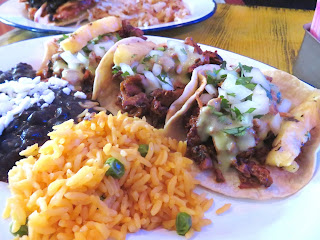 Deciding to order one shared dish a la carte, Starr and Brandy began their morning with some Al Pastor Tacos, which came served with yellow rice and chipotle black beans. The pork filing had a nice slow spice to it that gradually built up to a pleasant warmth, while the roasted pineapple really livened up each bite. Brandy particularly liked the texture of the fresh white onions, which were a nice crisp contrast to the tender pork. 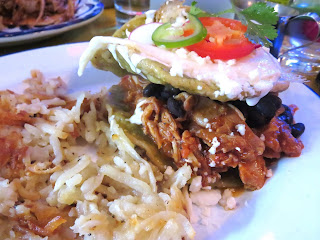 Starr's entree consisted of the Chicken Chilaquiles with pulled chicken, whole black beans, tomatillo salsa, crema, queso fresco, and a fried egg. Unlike most chilaquiles Brandy has seen, this one was almost more of a sandwich or a napoleon, with the ingredients layered between two crisped, whole tortillas.  The flavor over all was bright, but hearty, with the salsa verde really taking the lead in the mix. The chicken meat was nicely tender and the tortillas, much to Brandy's approval, retained their crispness until the very last bite. "Don't forget about that drink of yours," Brandy goaded Starr, who hadn't even made it halfway through her margarita. 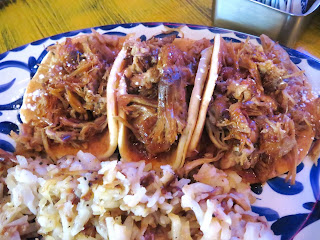 Brandy chose the Carnitas Pancakes, the only vaguely sweet option on the menu. Interestingly, they came served almost like tacos, with the pancakes serving as the shell and the carnitas neatly piled in the middle with a slathering of maple syrup on top. Brandy certainly appreciated the novelty of eating the sweet and savory pancake like a taco, but she wished the dish had one more element to complete it. "Something like a little sour cream or a bit of vegetation would have done wonders here," she mused.

By the end of the meal, Starr had only managed to complete a single, albeit gigantic, margarita, so the conclusion was that unless one was intending on really doing some serious drinking, the bottomless brunch option was perhaps not the way to go. "Just as I've always supposed, ordering a la carte, more often than not, is usually the smarter option," said Brandy, "Although, far be it for me to judge those who really need the hair of the dog badly enough to power through more than two of these cocktails first thing in the morning." 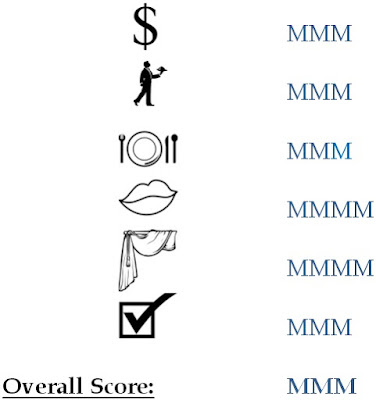