The Slow and Savory 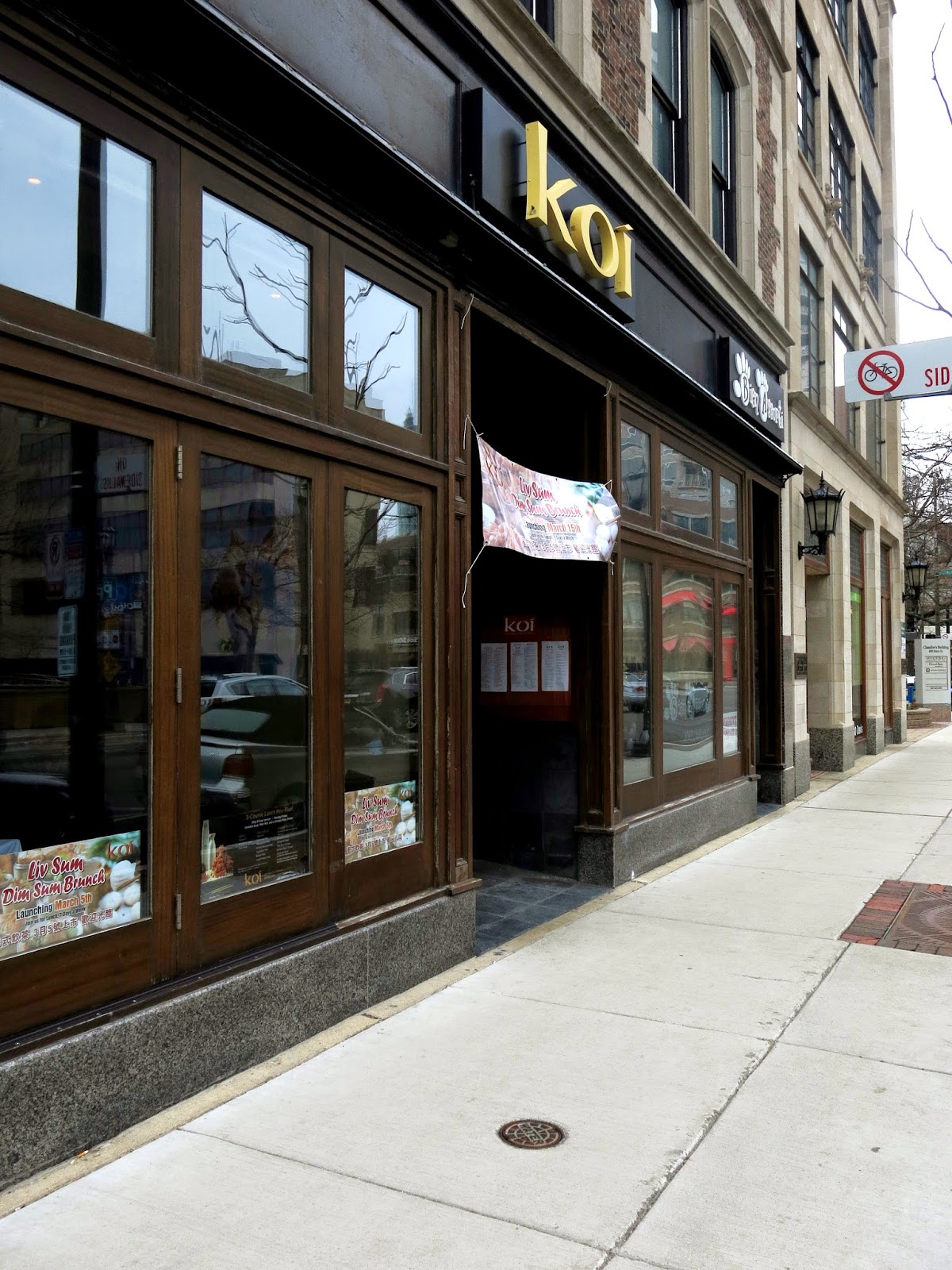 It's funny how ritualized people get about their weekends.  "I have to have a drink after work on Fridays," some say, while others proclaim, "I can't get out of bed until at least 10:00 on Saturdays or else the whole weekend feels off."  Obviously, Brandy's routine must include a brunch of some sort, which is perhaps why she has forgotten over the years that so many others worship at a different alter every Sunday morning (that is to say, actually worshipping at an actual alter).  She was reminded of this fact by a new friend she met recently in the grocery store (they were both reaching for the last bag of chestnuts), who goes by the name of Bernais Bamboo.  Ms. Bamboo, it seems, is a Sunday school teacher at a local Unitarian church, where she cheerfully struggles through teaching the core moral lessons of every religion to her little flock of angels, which Brandy quickly found out after asking her to brunch.  "Oh, Sundays are a sacred day for me," she responded, "That's my time to mold the little ones into law abiding and kind citizens of the world."  "Yes, yes.  What about a Saturday then?  I suppose it wouldn't be a tragedy to brunch on a Saturday," Brandy sighed, which Bernais seemed agreeable to. 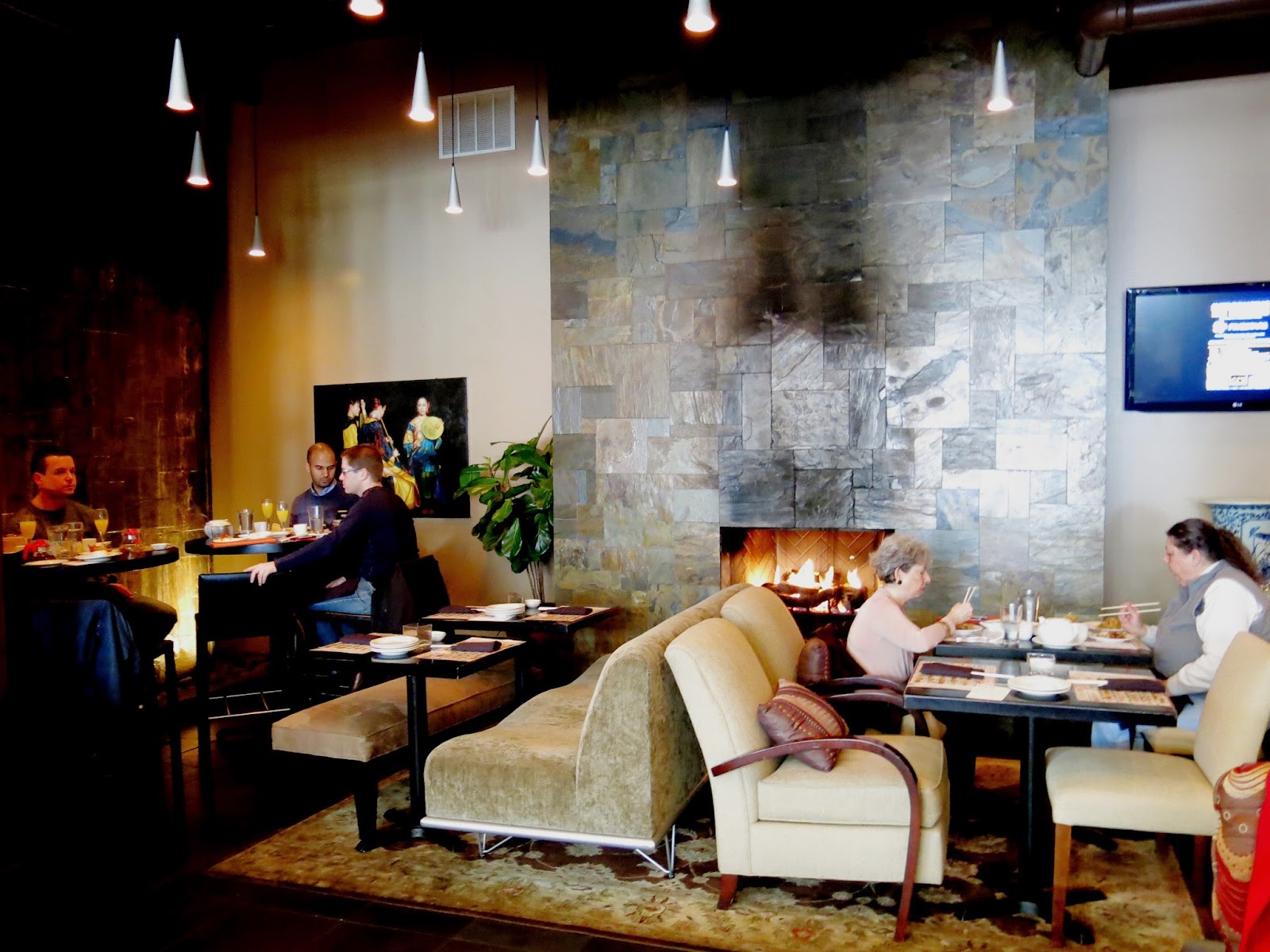 Brandy chose to take Bernais to Koi in Evanston for a new kind of brunch experience.  "They just started a dim sum style service here," Brandy explained, "Dim sum is a tradition in China and other Asian countries where families will stay at a restaurant for several hours, even all day in some cases, snacking on a variety of small dumplings and other dishes that are brought around on carts."  "How lovely!" Bernais exclaimed.  The inside of Koi was open and sunny with a soothing water wall off to one side as well as a cozy fireplace.  Those combined with some of the metal and wood accents gave the place a very balanced, peaceful sort of feeling.  A smiling waitress swept in right away to offer them some cocktails (a mimosa for Brandy and a Bloody Mary for Bernais) as well as pots of artisan tea (chamomile for Brandy and jasmine for Bernais). 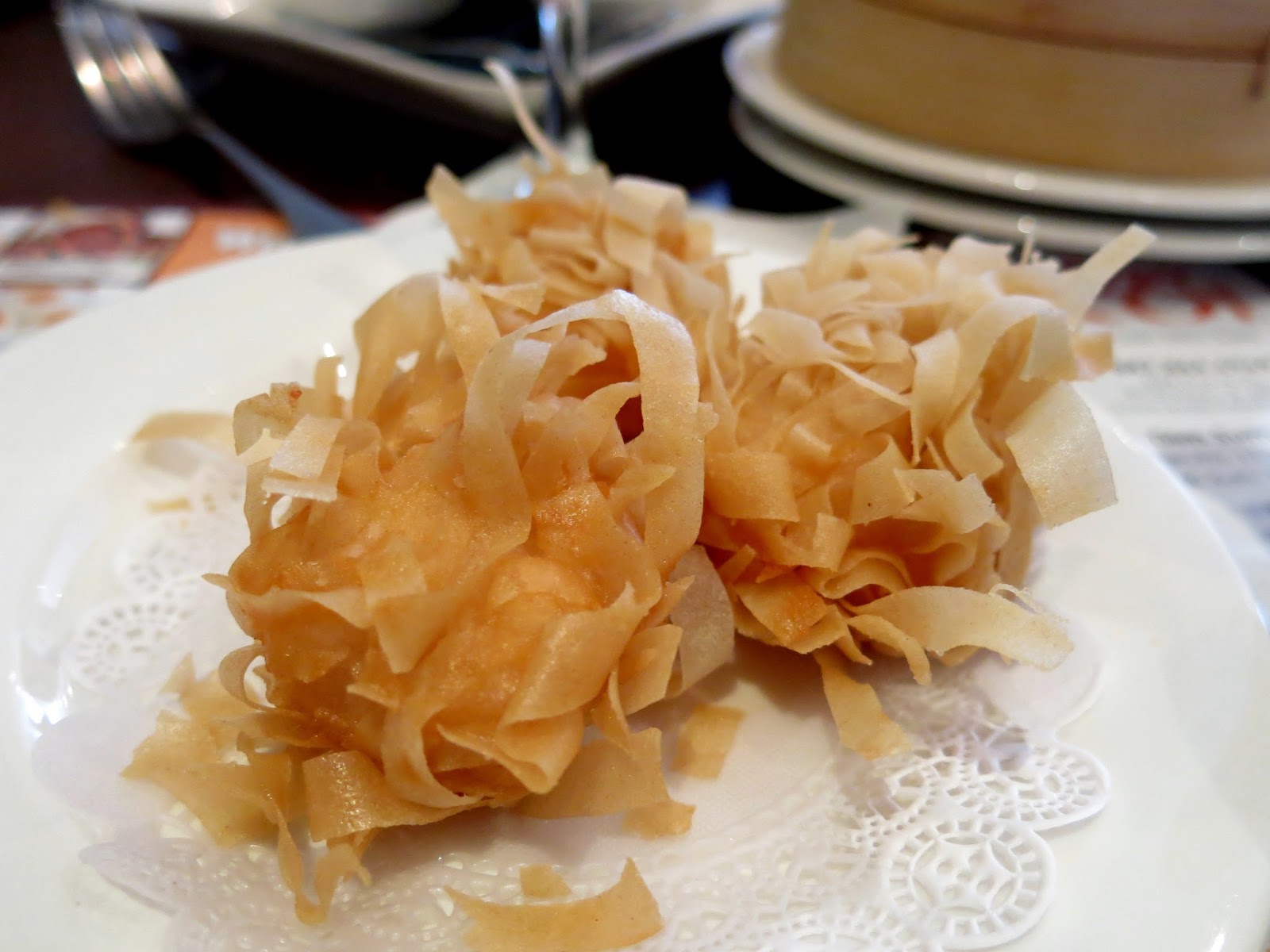 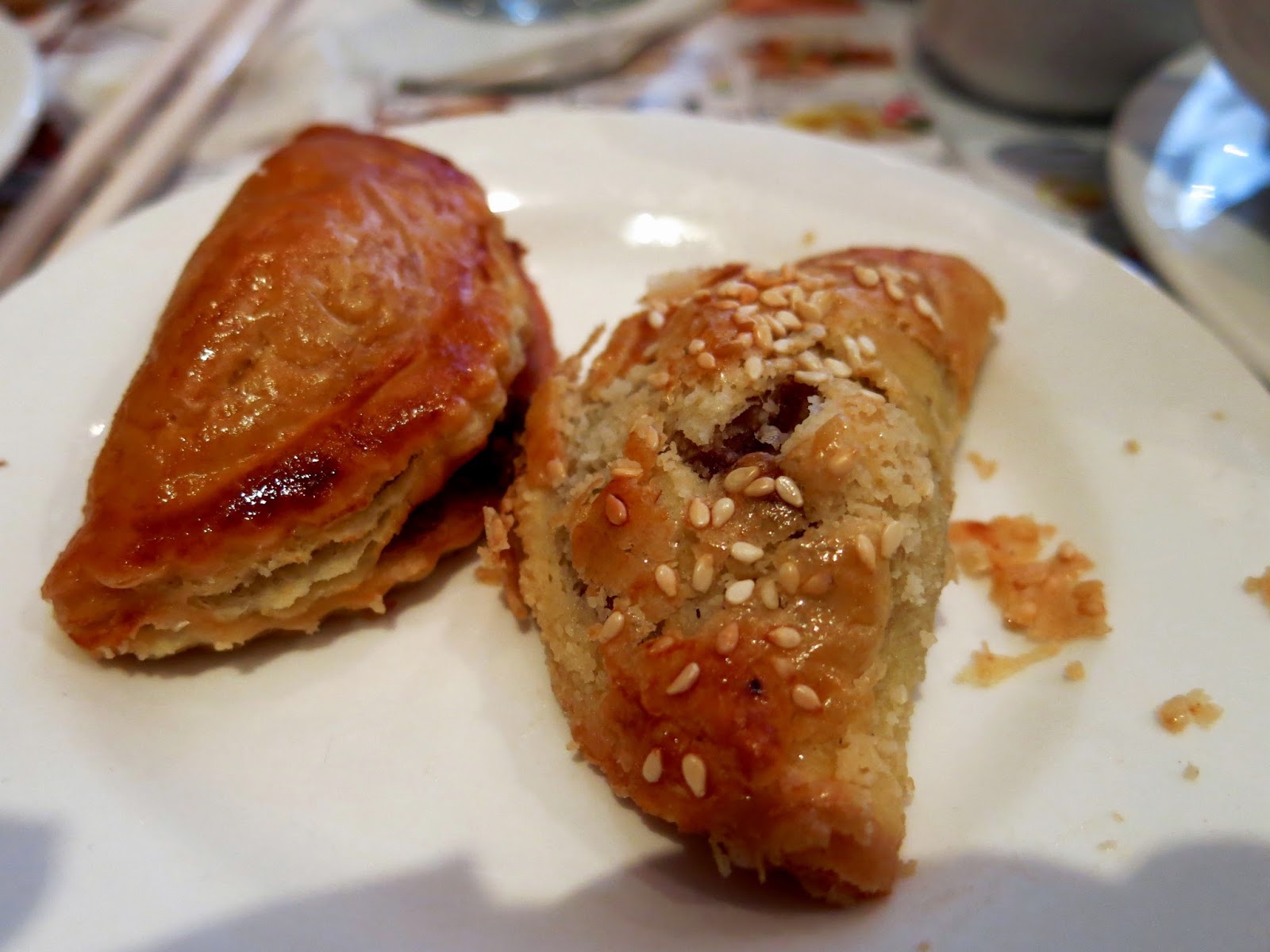 Then came the onslaught of offerings.  Brandy and Bernais had been provided with helpful picture guided menus on their tables, but with over 60 options, it was hard to take everything in before servers began appearing with trays and carts full of beautiful little plates.  Trying to keep up as numbers were rattled off (the servers would point at each dish and say something like, "I have #10, #16, #47, #48, and #49 here."), Brandy and Bersain selected round after round of extraordinary one or two bite delights. 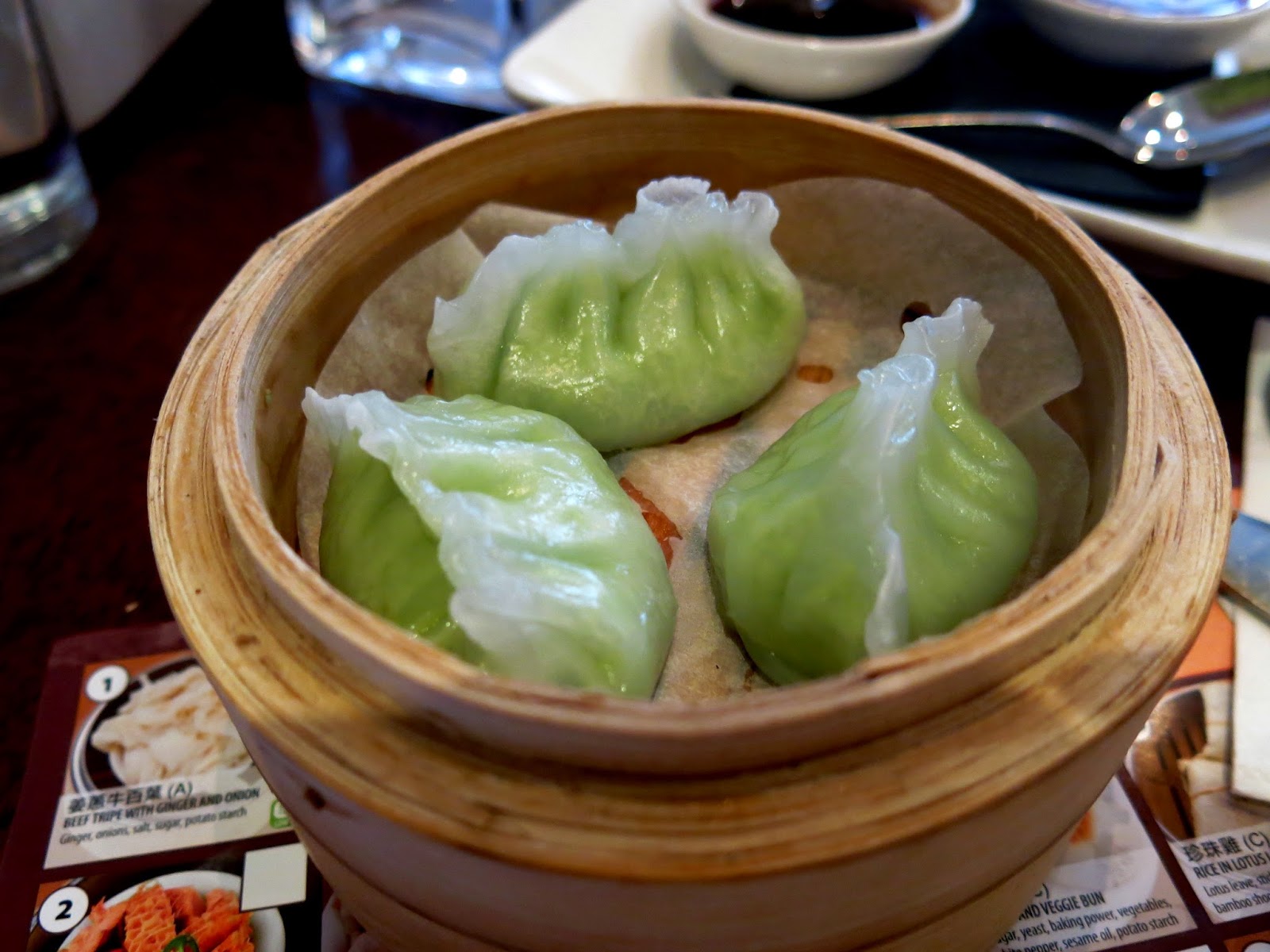 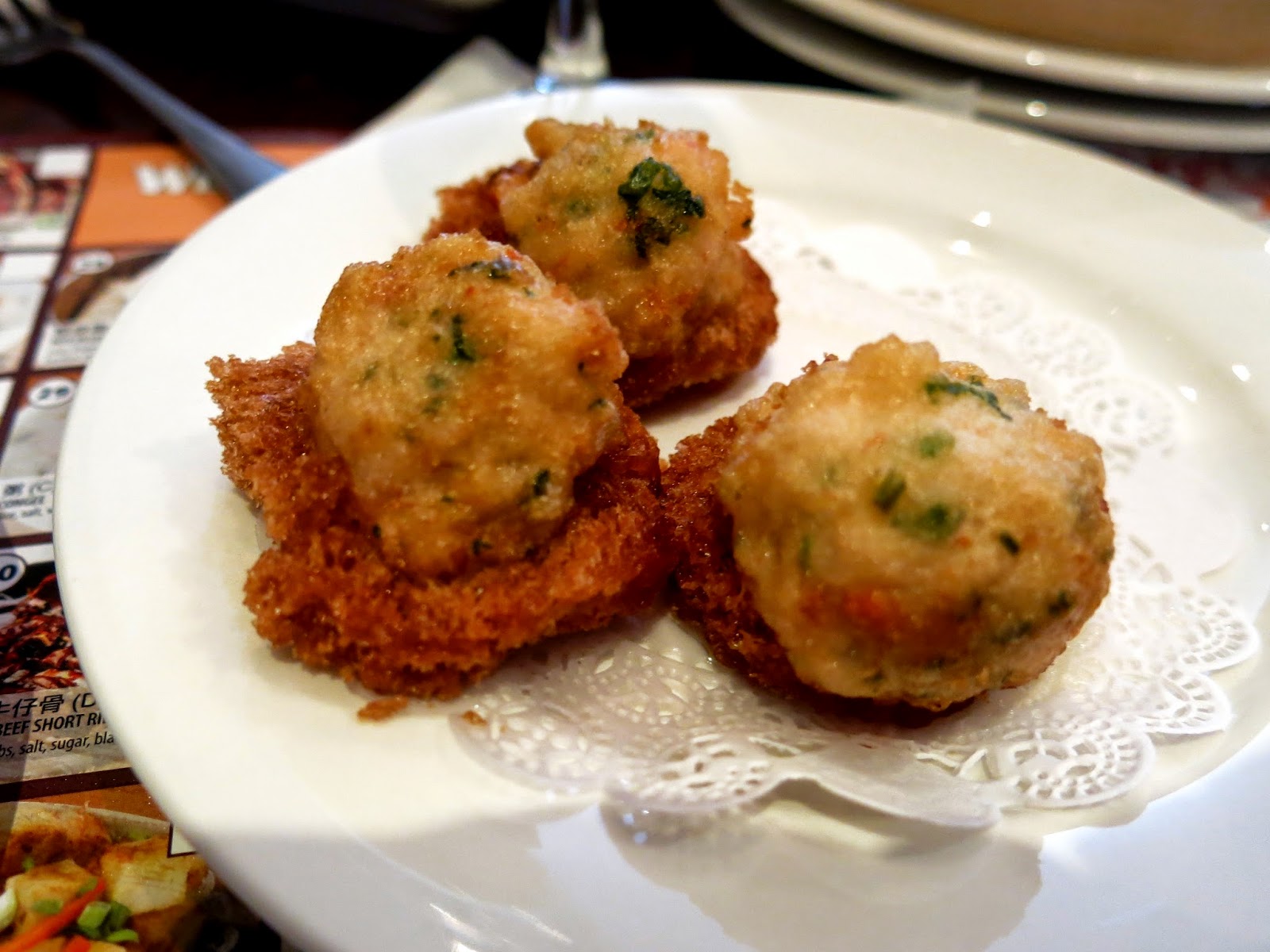 Several things quickly jumped out as favorites among the bunch.  First, there was the BBQ Pork Shou, a sort of baked hand pie, almost like what the English refer to as Cornish pasties, which had a transcendent, buttery, flakey crust, and a very sweet, almost dessert like filling of tender barbecued pork.  Similarly, there was the BBQ Pork Bao, a steamed dumpling with a soft, bread like exterior.  The Mango Shrimp Toast provided a lovely contrast in textures with its supple, melt away base of fried mango, and its topping of minced and spiced shrimp.  The Edamame Dumpling, which was another steamed offering with a thin rice paper wrapper and a smooth bright green filling, made for a very nice sort of pallet cleansing interlude between richer bites.  "It's so adorable!" Bernais squealed, referring to the edamame dumpling in her hand, "I just want to make a little face on it out of sesame seeds!"  Brandy also really liked the Fried Tofu Skin, which had a more interesting crispness to it than the other fried options, with a clean and crisp mixed vegetable filling. 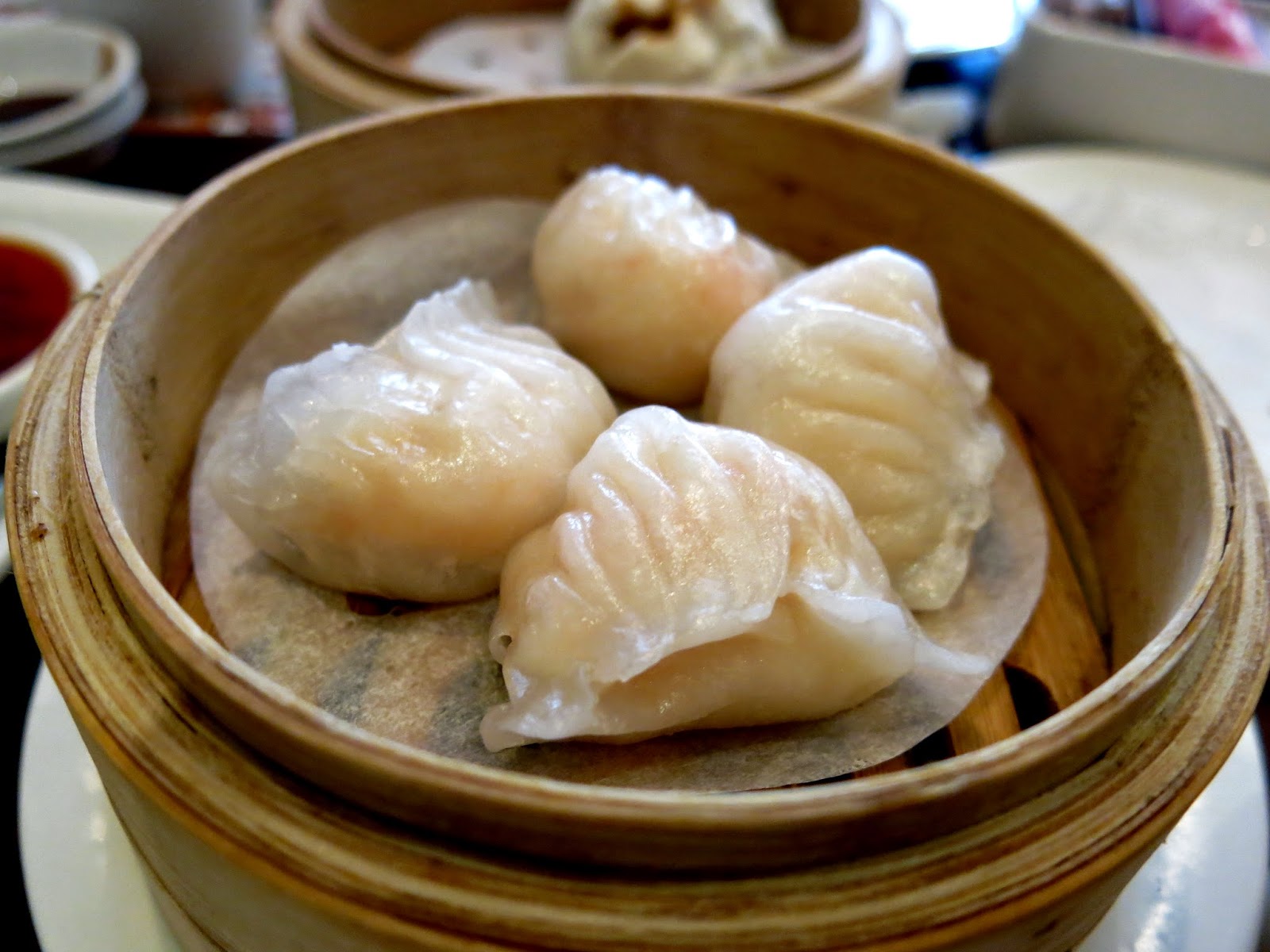 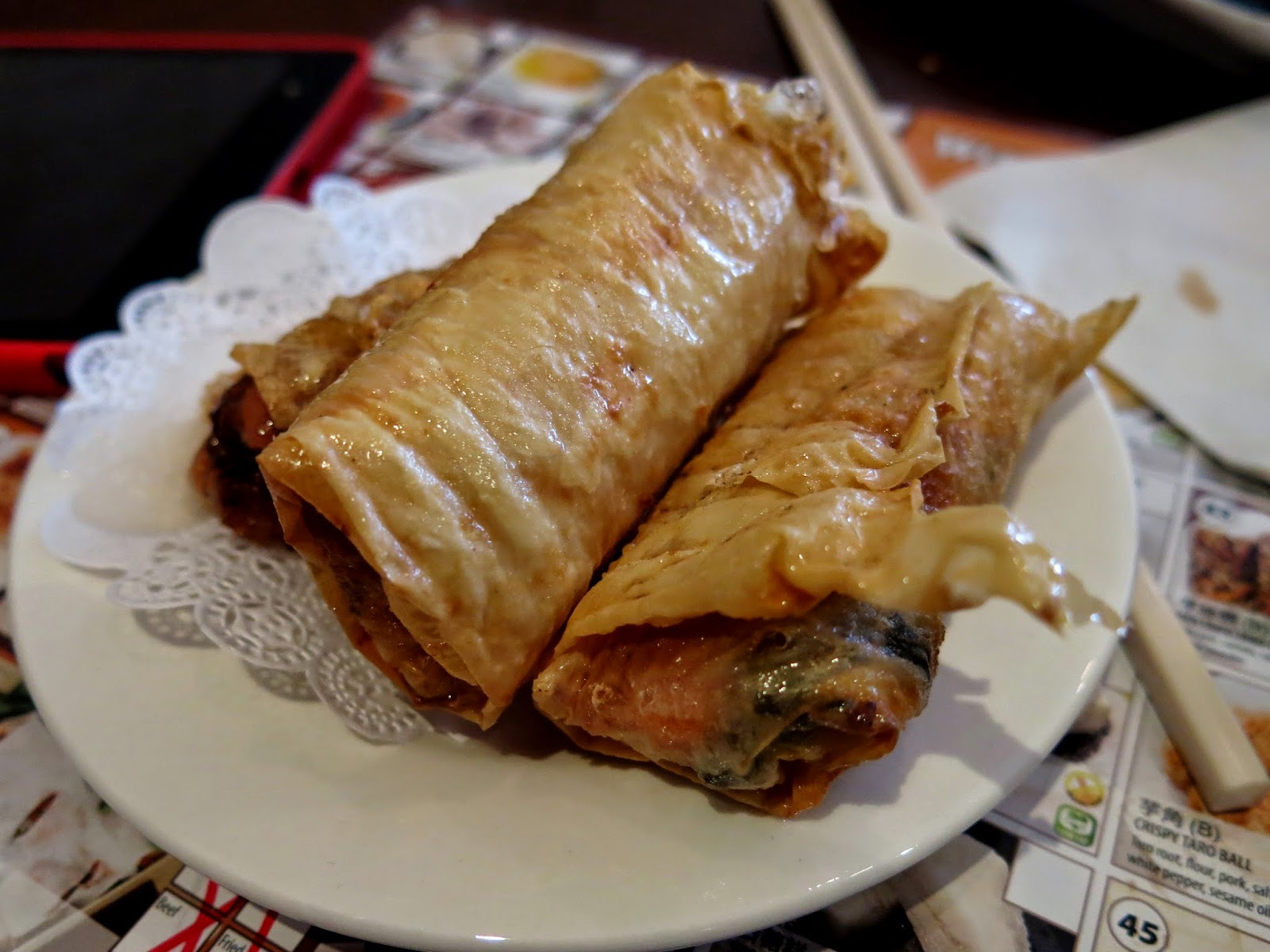 The dishes seemed to alternate between the extremely flavorful, and those that were a little more simple.  The Crystal Dumplings and the Shrimp Dumplings, both of which were steamed bites in rice paper wrappings, were a little bland without much spice or seasoning to them, as were the Shrimp Balls, a fried dish, which at least had the benefit of being interesting texturally.  The table had been provided with a small helping of both chili oil and plum sauce, which did help to jazz up some of the less exciting offerings, but Brandy soon wished for a few more sauces to experiment with.  "A little spicey mustard or sweet and sour sauce might have helped to break things up a bit," she remarked.  The Beef Short Rib also proved to be one of the least favorites, if only because the flavorful and tender meat got lost in a bowl of mostly broth, bones, and fat. 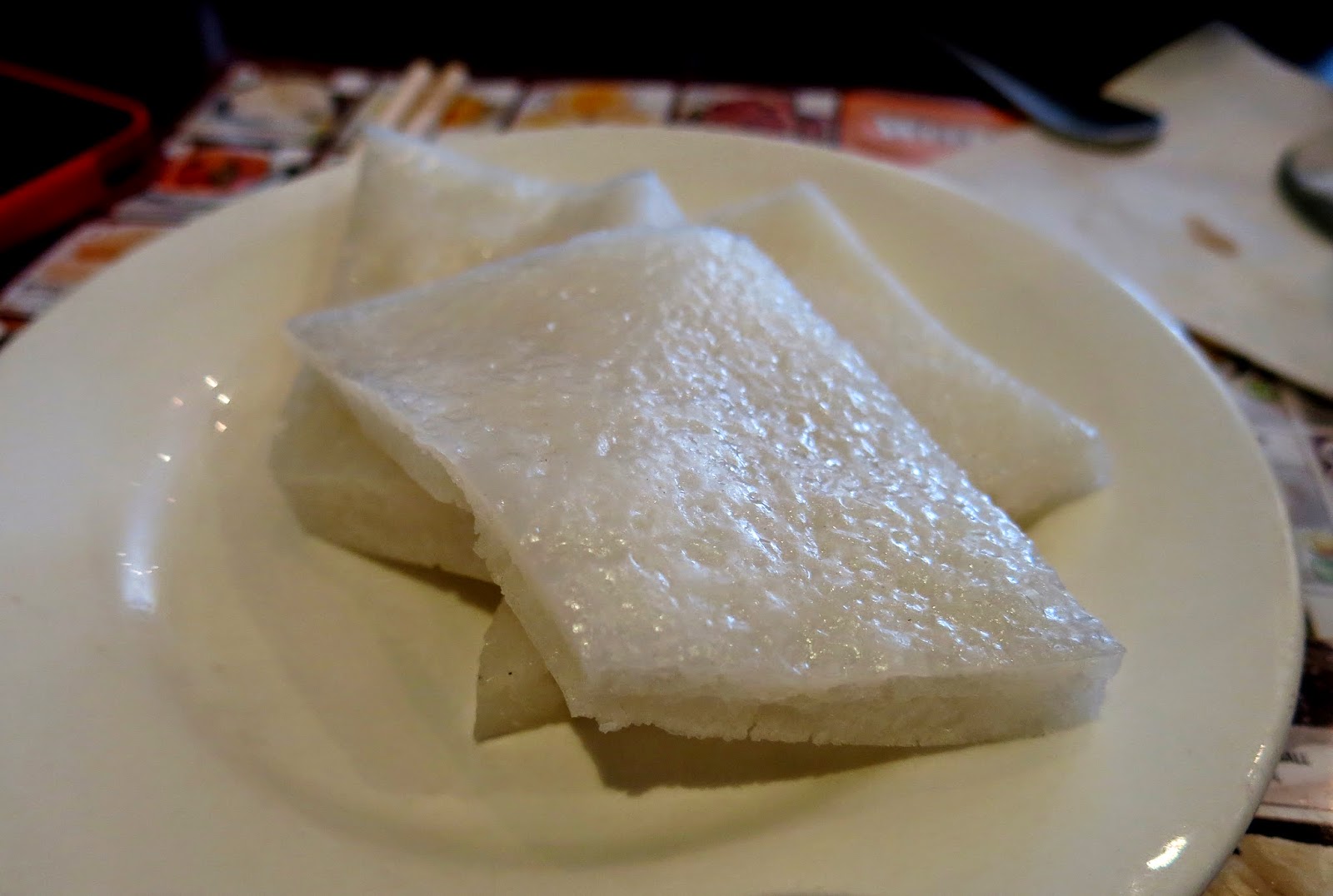 There were also several sweet options mixed in with the savory bites, which Brandy appreciated immensely.  The Egg Tart, a simple custard in a neat little crust, was perhaps a little less sweet than imagined, reminding Brandy less of a creme brulee (as their server described it) and more of a particularly creamy quiche.  The Sugar Cane Cake was a interesting experience in texture, as it had a very pleasing gelatinous and chewy mouthfeel,  even if the flavor was just a very subtle sweetness.  The absolute favorite for both Brandy and Bernais was the Coconut Bun, which almost resembled a pretzel, but was actually an unbelievably soft and pillowy steamed bread filled with the most luxurious coconut custard and topped with sesame seeds.  "Oh my stars!" Bernais moaned after taking her first bite of the confection, "If there is anything to prove the existence of God, this might be it.  I need to take a box of these to my Sunday school kids!" 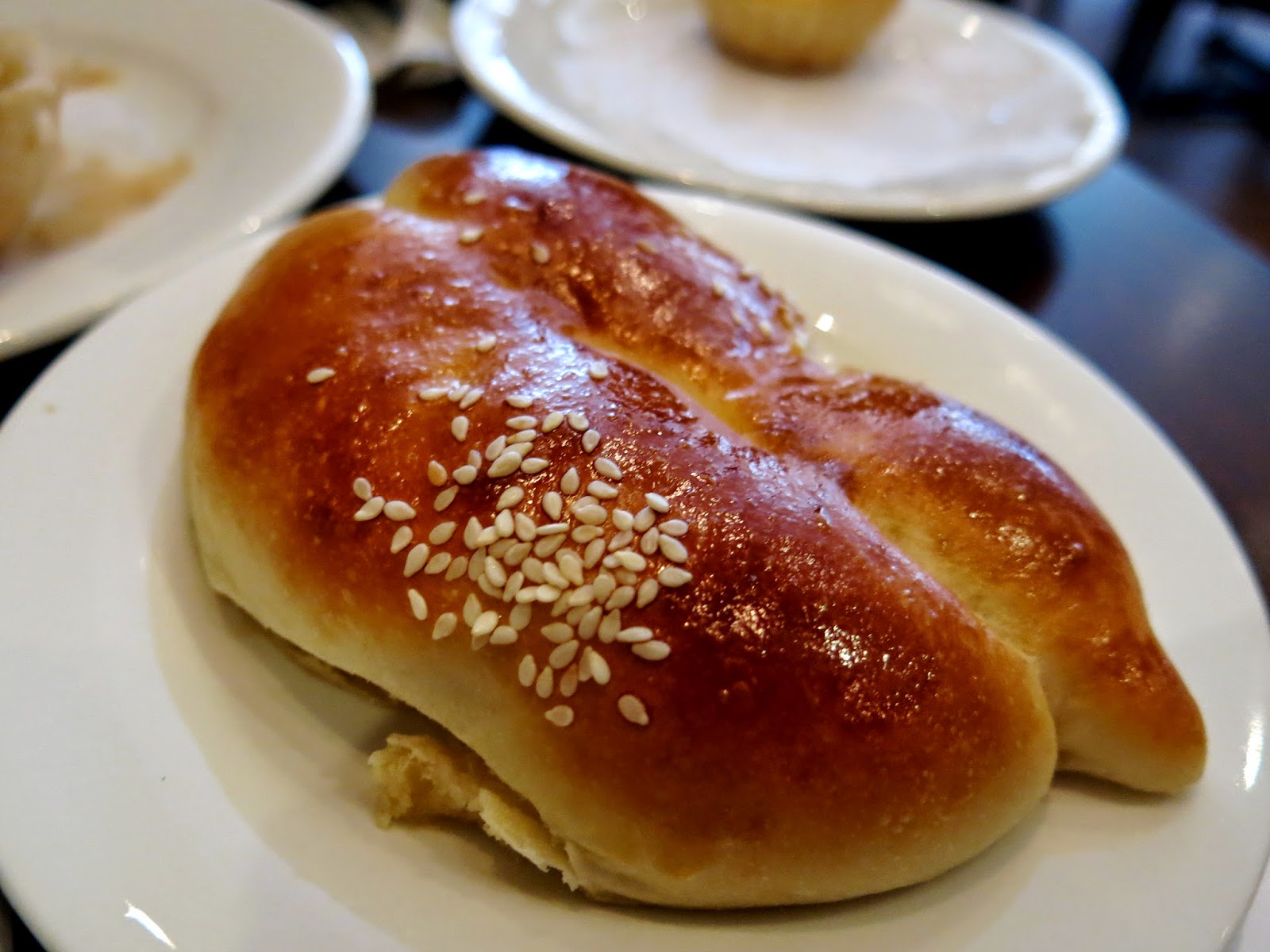 Brandy very much enjoyed her dim sum experience at Koi and could have happily stayed the entire day in order to try all 60 dishes on the menu if Bernais hadn't had to get home and plan her lesson for the following day.  "But I am very glad to have done something a little out of my weekend routine!" she said cheerily, "In fact, I'd love to make dim sum part of my weekend routine from now on, if you'd like to join me."  "Sadly, I cannot," Brandy sighed, "For I am held to another ritual, that of journeying forth, forever in search of the brunch-time adventures Chicago has in store."  "Ok then," Bernais chirped, "Then I guess I won't have to share that coconut bun the next time I come here!"