From the Kitchens of Bunny and Brandy: Cooking with Jackie Collins! 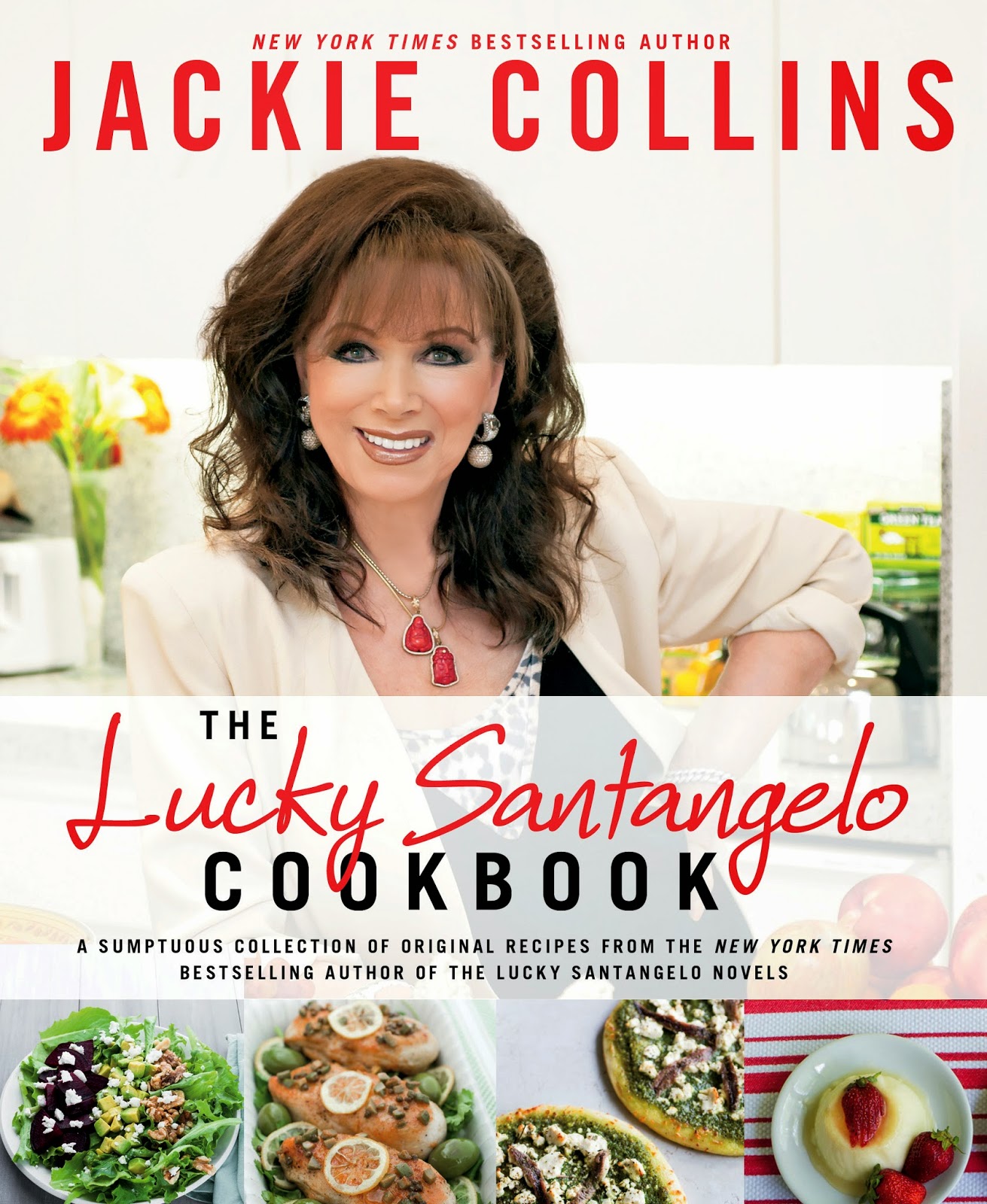 Brandy has always been a big fan of literature.  She often talks about how in her youth she had the inclination to become a novelist herself, though that desire seemed to have waned after a wild night with Hemmingway and F. Scott Fitzgerald (she won't say much about that evening other than that there was a race between a Model T and a bull involved).  But her hunger for the written word never went away; no matter the genre, plot, or era, Brandy is sure to devour it.  She simply reads everything from Tolstoy to Grisham,  from twelve volume fantasy novels to the backs of cereal boxes.

For years, one of her guilty pleasures has been the salacious stories of famed British author Jackie Collins, who has written almost thirty novels in the last 45 years.  Never ashamed to flaunt her vices, Brandy happily boasts of her love for one of Collin's most prominent heroines, Lucky Santangelo.  Featured in eight of Collin's novels, Lucky Santangelo is the definition of the modern, independent woman with her powerful presence, fierce sensibilities, and sassy attitude (it should be obvious by now why such a character would be appealing to Brandy).  This is why Brandy was more than thrilled to learn that Jackie Collins was releasing a cookbook based on Lucky, aptly named The Lucky Santangelo Cookbook, which puts both Jackie's love of entertaining and Lucky's Italian-American heritage to use in a collection of cocktail, appetizer, entree, and dessert recipes perfect for everyone from the beginner cook to the well seasoned party planner. 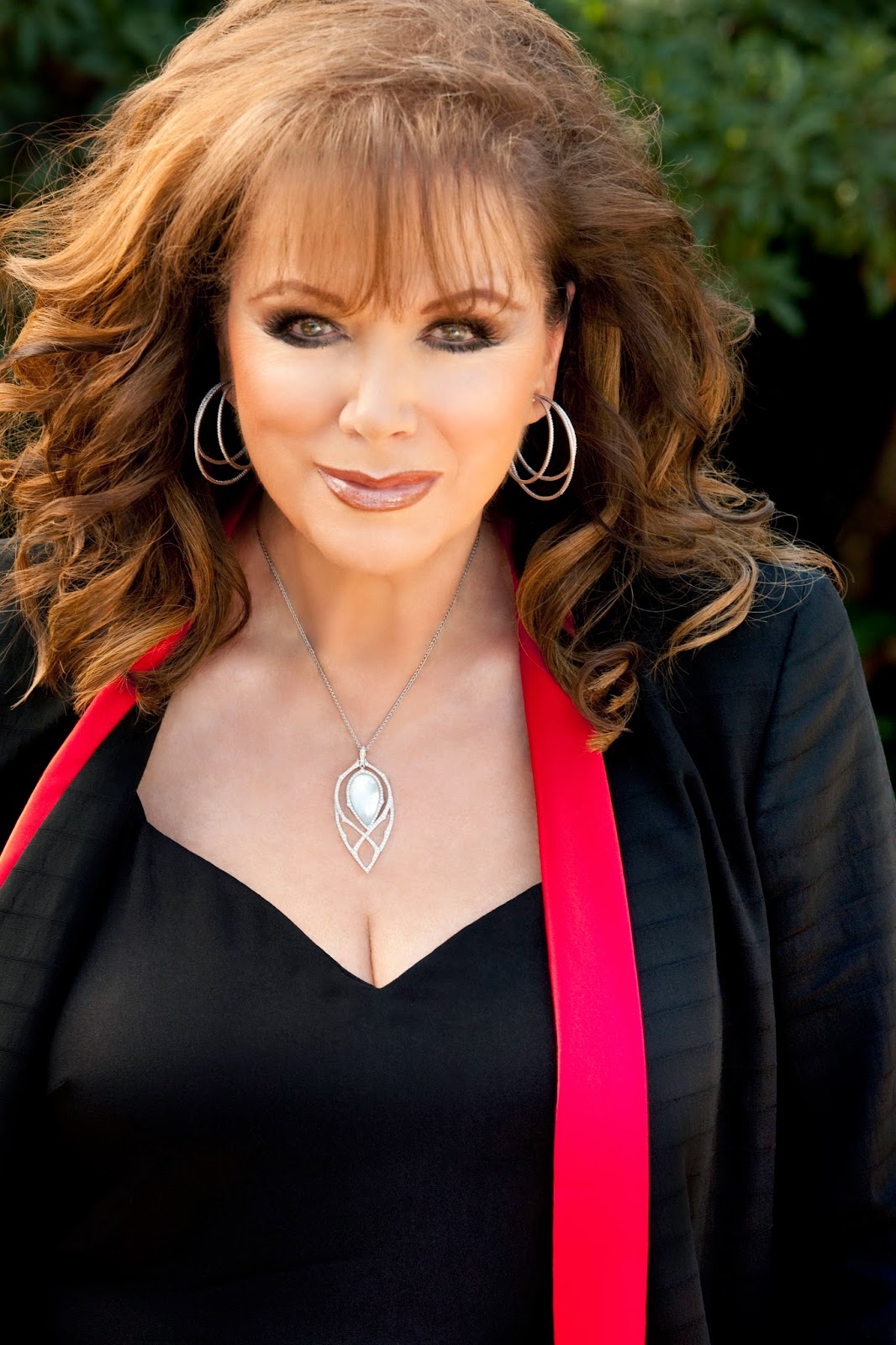 Pulling some strings, Brandy managed to get in contact with Jackie Collins herself to have a little chat about this exciting new venture.  "I was sitting at my desk one day and I thought, 'I want to do something a little different than just write another book.'  It came to me that [a cookbook] could be something I could give back to the fans," Jackie said of her inspiration for creating the cookbook, "It's a different kind of cookbook.  So now, instead of getting a hardback book, which turns into a paperback book that goes back on your shelf, you can have something that goes in your kitchen and have fun with it."

Stylistically, the book certainly is not your average culinary instructional tome.  The book opens with pictures of Jackie and some of her celebrity friends (Michael Caine, Rod Stewart, and Hugh Jackman to name a few, and of course, Jackie's sister, actress Joan Collins), and then showcases not only beautiful photos of the food and easy to follow recipes, but also vibrant illustrations of Lucky herself.   "I had so much fun styling the illustrations of Lucky.  I would be on the phone to the illustrator [Michelle Beilner] and say to her, 'Ok, I want her to wear this dress and I want her to have these earrings, and black nail polish," said Jackie.  There are also freshly written sidebar pieces throughout, which give a glimpse into Lucky's world of indulgence and intrigue. 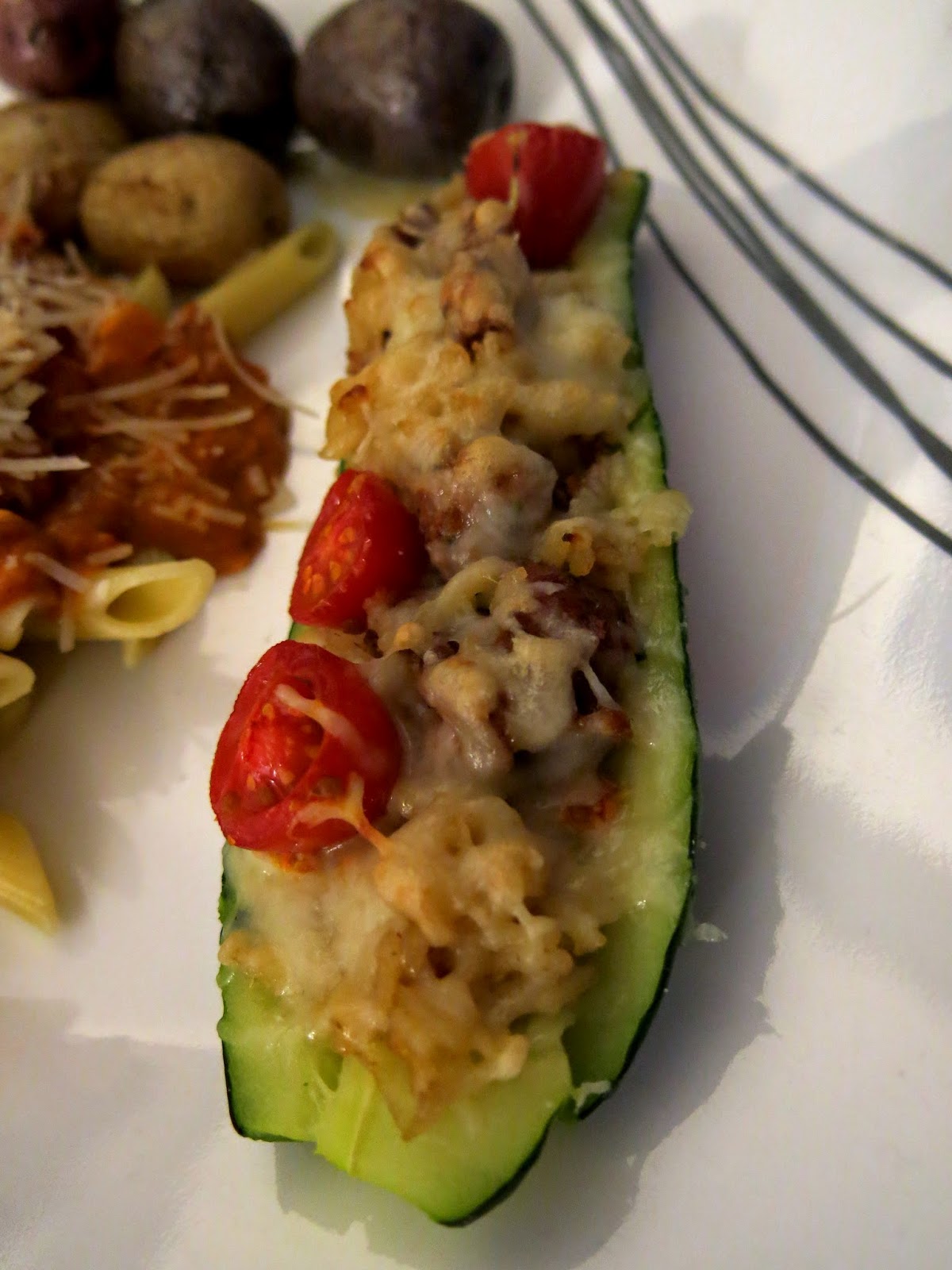 "I love the recipes, I'm so enamored with them," Jackie said when Brandy asked her about the goal behind writing the book, "They are dishes anybody can make.  I didn't want them to be complicated, I wanted them to be simple because I love being in the kitchen and experimenting.  I don't want to be searching out Japanese markets for some obscure ingredient nobody's ever heard of.  That's the kind of cook I am.  One thing about the Lucky Santangelo Cookbook is that it's for everyone.  It's not full of recipes that you go, 'What the hell is that?!'  It's also an indulgence.  It's everything decadent and delicious.  I am so fed up with these cookbooks that are full of non-gluten and vegan and this that and the other.  I hate fake sugar and I hate fake butter.  I wanted it all to be real ingredients, which are better for you in the long run.  I mean, someone's just got to say to me, 'This is low fat,' and I think, 'I don't want that.  Why waste my time?'  [This cookbook] is not low fat, it's delicious, and we all deserve a treat once in a while."  In Brandy's case, a treat at every meal seems more appropriate.

Brandy couldn't help but ask Jackie about her favorite kinds of brunch indulgences.  Noticing a recipe for a killer Bloody Mary in the book, Brandy asked Jackie if she prefers Bloody Marys or Mimosas with brunch.  "I love mimosas.  I absolutely love mimosas.  I even love peach mimosas," Jackie said, proving herself to truly be a woman after Brandy's own heart, "I love sangria for brunch too.  I love a cool sangria filled with cucumber and cut up fruit.  I love using 7-Up in sangria because it really goes well with the red wine.  Tons of ice, tons of fruit, tons or cucumber and you've got yourself a fabulous afternoon.  As I say, decadent and delicious."  But the real question remained: what would Lucky have for brunch from the recipes in the book?  "I think Lucky would like the Smoked Salmon Pizza with the Jackie Collins [cocktail] with lots of ice, of course, or maybe the Venus Bellini, which is also a fabulous drink.  And then she would probably have the Cointreau and Peaches, which would be very decadent at lunchtime." 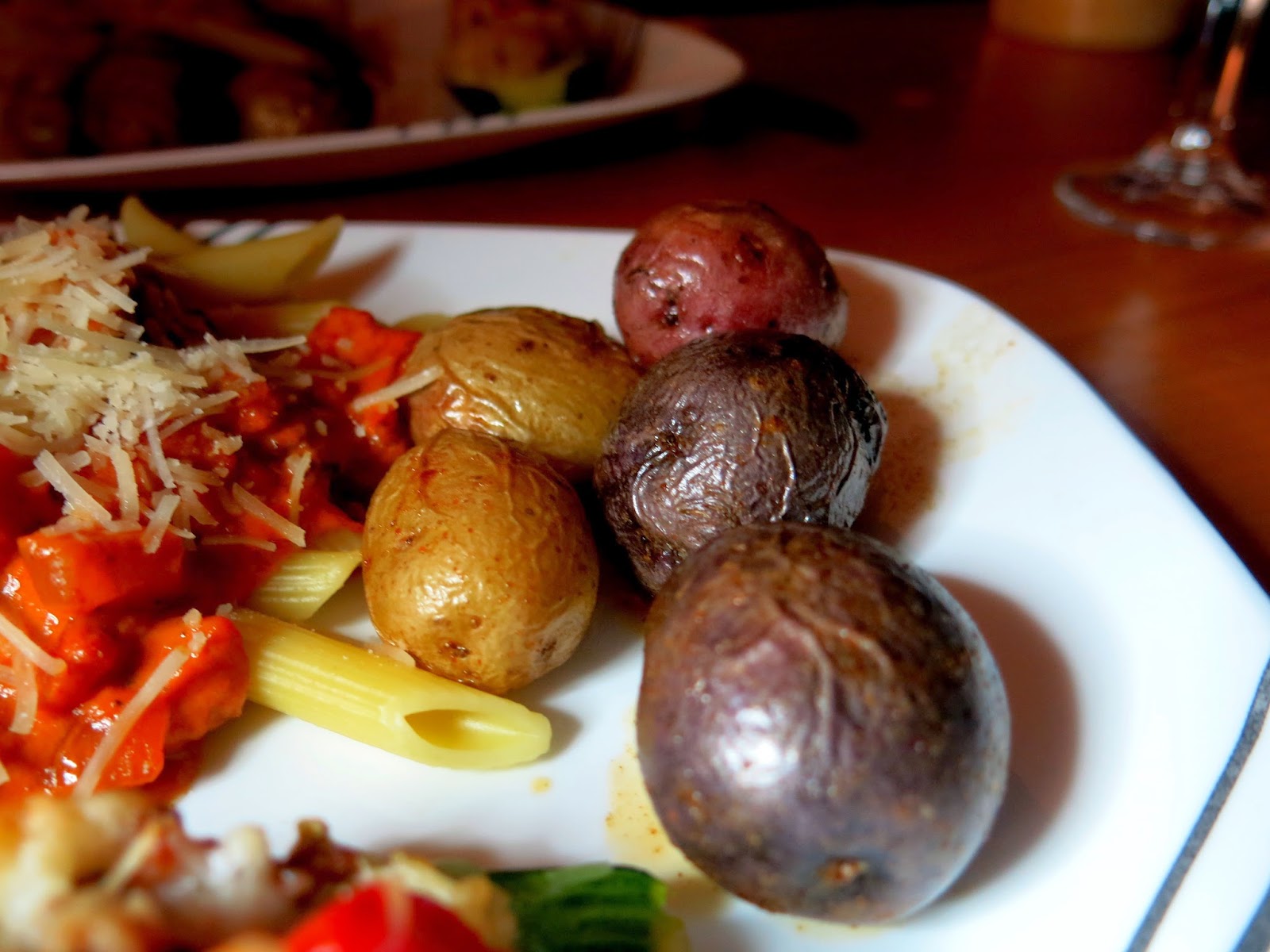 Flipping through the book, Brandy found quite a few recipes that drew her interest.  The Venus Bellini that Jackie had mentioned jumped out right away as a way to spruce up a traditional brunch drink with some fresh fruit purees.  The Zucchini Boats, for example, with their sausage and spiced rice stuffing sounded like a nice fresh option for brunch, as well as the rich and succulent sounding Penne alla Vodka Martini with Bacon and Sausage.  A side of crispy English Roasted Potatoes was certainly appealing to Brandy, as was the Butterscotch Pie, which had supposedly been inspired by the Midwestern grandmother of a friend of Jackie's.  Brandy related her menu for a brunch made up of recipes from the book to Jackie, which she seemed to approved of, especially the potatoes.  "If you're an Anglophile, you'll love the English Roast Potatoes.  They are fabulous.  People love them.  One of the things I like to do before I put [the potatoes] in the hot oil is I like to sprinkle them with paprika and mixed herbs and that makes a whole different kind of deliciousness."

That was enough to get Brandy's stomach rumbling, so she did indeed rush off to start whipping up some of Jackie's decadent delights.  The Lucky Santangelo Cookbook is available now in stores and online in both the traditional hardback and e-reader editions, but luckily for our readers, Jackie herself has let us give you all a sneak peak at two of Brandy's favorite recipes from the book!

The writers of this blog were provided with a copy of The Lucky Santangelo Cookbook for the purposed of writing this review. The Venus Bellini  Yield: about 6 Bellinis
In a medium saucepan over medium heat, heat the water and sugar and stir steadily until the
sugar has dissolved, 4 to 5 minutes. Set the sugar syrup aside to let cool.
In the jar of a blender, purée the peaches, tangerine peel, and ¼ cup of the sugar syrup until very
smooth. Strain into a medium bowl, cover with plastic wrap, and refrigerate.
Clean the blender jar, add the strawberries and ¼ cup of the sugar syrup and purée until smooth.
Strain into another bowl through a fine-mesh strainer or a strainer lined with cheesecloth, and
discard the strawberry seeds. Cover the bowl with plastic wrap and refrigerate.
Clean the blender jar again, add the passion fruit purée and purée with the remaining sugar syrup
until smooth. Pour into a small pitcher, and transfer the chilled strawberry and peach mixtures
into two other small pitchers.

For each Bellini, have your guests choose their preferred fruit mixture and pour about 3
tablespoons of the chosen mixture into a tall champagne flute. Slowly pour enough champagne
or prosecco into the flute until it’s filled. Garnish with the strawberries and orange and lemon
twists and serve at once.

Penne alla Vodka Martini with Tomato, Sausage,  Bacon, and Cream  Yield: 4 large servings, but great for 2, because the leftovers are particularly succulent 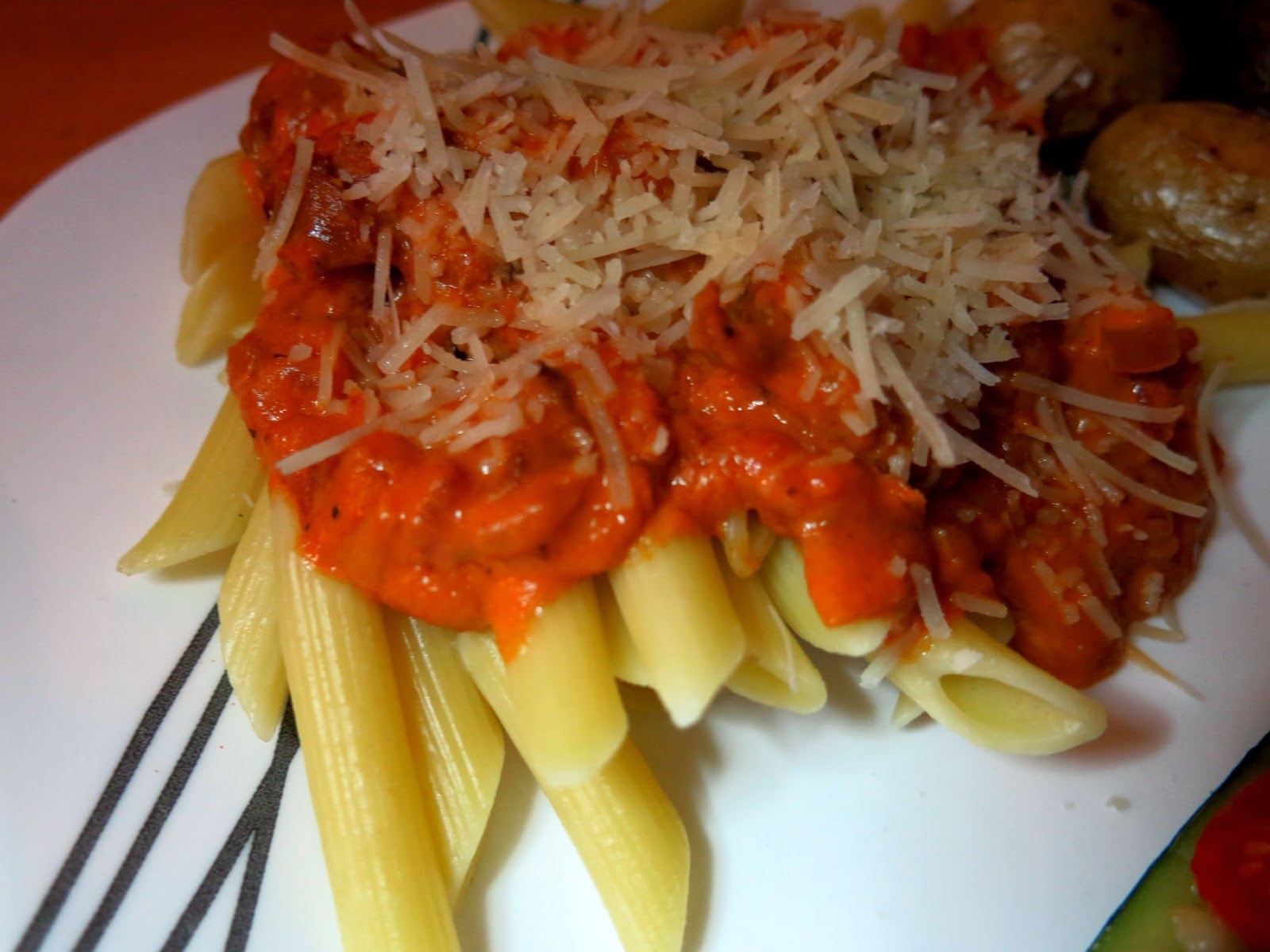 In a deep, heavy-bottomed sauté pan, cook the bacon over moderate heat until most of the fat has
rendered. Pour off all but 2 tablespoons of the fat (or as you wish), add the onion and red pepper
flakes, and cook just until the onion is soft and translucent. Add the tomatoes, lower the heat, and
simmer for 30 minutes, stirring every 5 to 10 minutes.

Meanwhile, bring 4 quarts of water to the boil in a large pot. Prick the sausages with a pin every
inch or so and toss them into the water. Bring them to a simmer and let them bubble away for 10
minutes. Drain the sausages and cool them in a colander.

Meanwhile, bring a large pot of salted water to a boil for the penne, which will probably need no
more than 10 to 12 minutes to cook, so don’t add it to the boiling water until the final phase.

Add the vodka, vermouth, and tomato paste to the tomato mixture. Simmer for 15 minutes.
Cut the cooled sausages into bite-size pieces and toss them into the sauce. Just when you’re
ready to add the penne to the boiling water, increase the heat under the sauce to high, add the
cream, and, using a splatter screen as needed, and stirring often, boil the sauce vigorously for
10 minutes, about the amount of time the pasta needs to cook. The sauce will, of course, thicken
considerably.

You can blend the cooked penne with the sauce, stirring in the grated cheese, oregano, and red
pepper flakes, if using. Serve garnished with the shaved curls of Parmigiano-Reggiano.

Preheat the broiler. Drain the pasta and, without rinsing, transfer it to a 2½-quart (or larger)
gratin dish. Add the sauce and stir in grated cheese to taste, the oregano, and the red pepper
flakes, if using. Place the dish under the broiler and cook just until the penne poking out of the
top of the gratin begin to singe and crisp and the sauce sizzles, 2 to 4 minutes. Serve topped with
the shaved curls of Parmigiano-Reggiano.
Posted by Bunny and Brandy at 10:10 AM