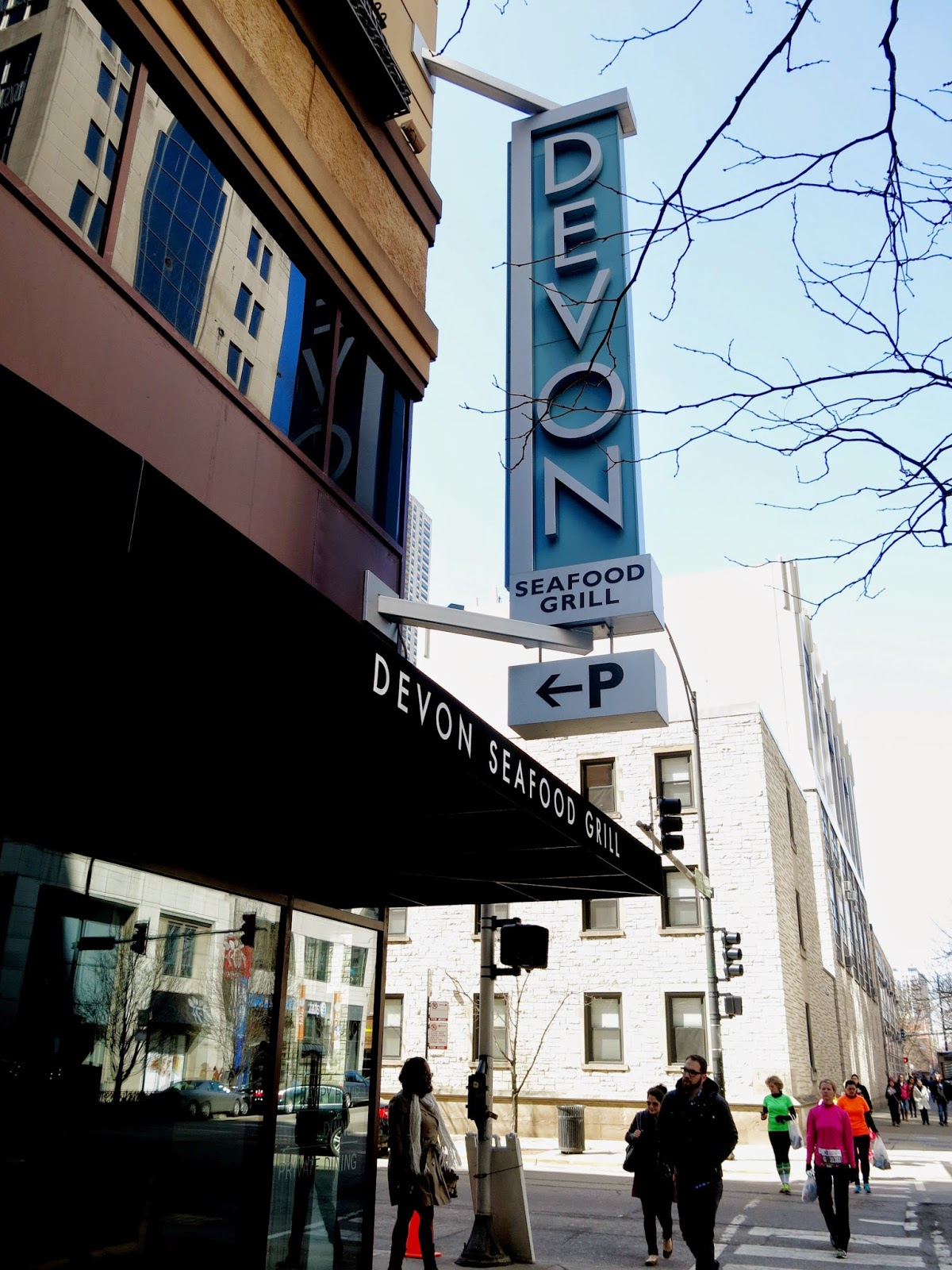 With the two biggest brunching holidays of the year fast approaching (Easter and Mother's Day), Brandy has been inundated lately with questions about her recommendations.  "We want to go somewhere with top quality ingredients, but without the prices to match."  "Is it better to go with a bigger group and just share a bunch of dishes?"  "Buffet or a la carte?"  "Sweet or savory?"  "Cocktail bar or juice bar?"  It has been an endless stream of inquiries for weeks.  Though Brandy can't deny that she enjoys being looked upon as an expert in the subject ("I have credibility in very few areas of my life, but its nice to be recognized for an expertise in side potatoes and fruit cups," she has been known to say), she does find the indecisiveness of her admirers a bit triffling.  "People just need to relax," she says, "The easiest way to pick a restaurant for brunch is to simply look at the menu on the web site and see if anything is appealing, then call to make a reservation.  You're asking to be sorely disappointed if you show up somewhere you've never been before with every second cousin you have and expect to be seated right away on Easter morning."  The one thing she will advise, however, is that when dining with large groups, Brandy does prefer a buffet.  "There's always something for everyone at a buffet," she says, "Classics and signature dishes, hot and cold, sweet and savory... a good buffet will anticipate the desires of the vast majority of its clientele and provide as such.  And on holidays, it makes things a little smoother and quicker for everyone, especially those whose tummies have been grumbling all throughout church services." 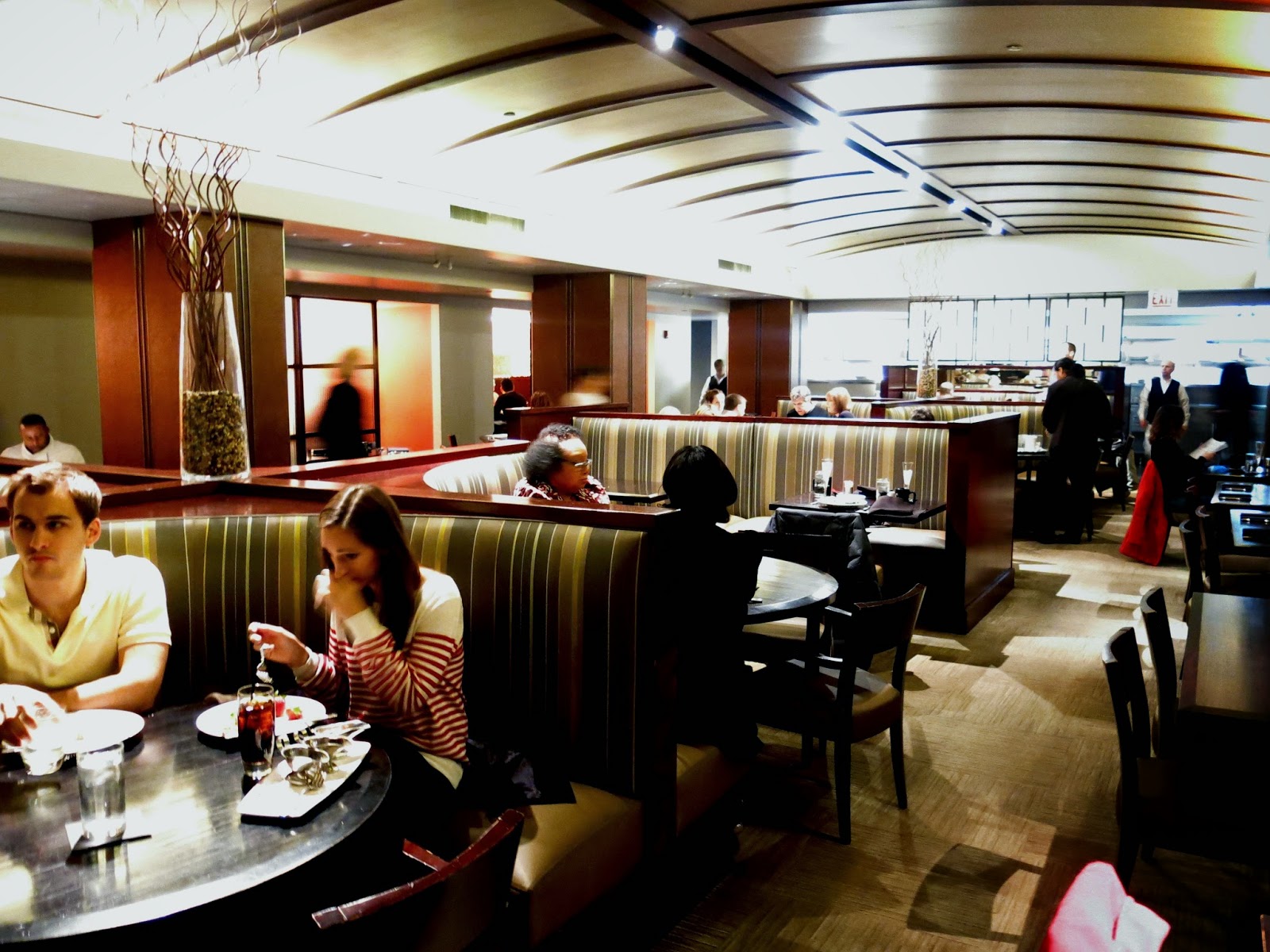 It came to Brandy's attention that Devon Seafood Grill in the heart of the Gold Coast had recently launched a brunch buffet of their own, and in the name of research, a few weeks ago she decided to bring along one of her most treasured companions, Babka (world famous Polish super model) to test the waters for all her curious readers.  The pair first entered what looked to be an empty, yet sunny bar area and were quickly escorted downstairs to a wider, more cozy dining area adjacent to the kitchen and a short walk from the buffet itself.  Though it was a little dim in the dining area ("It's fine for me.  Sunlight does horrible things to my skin," Babka drawled as she removed her $400 sunglasses), Brandy felt it was nicely decorated without being too flashy. 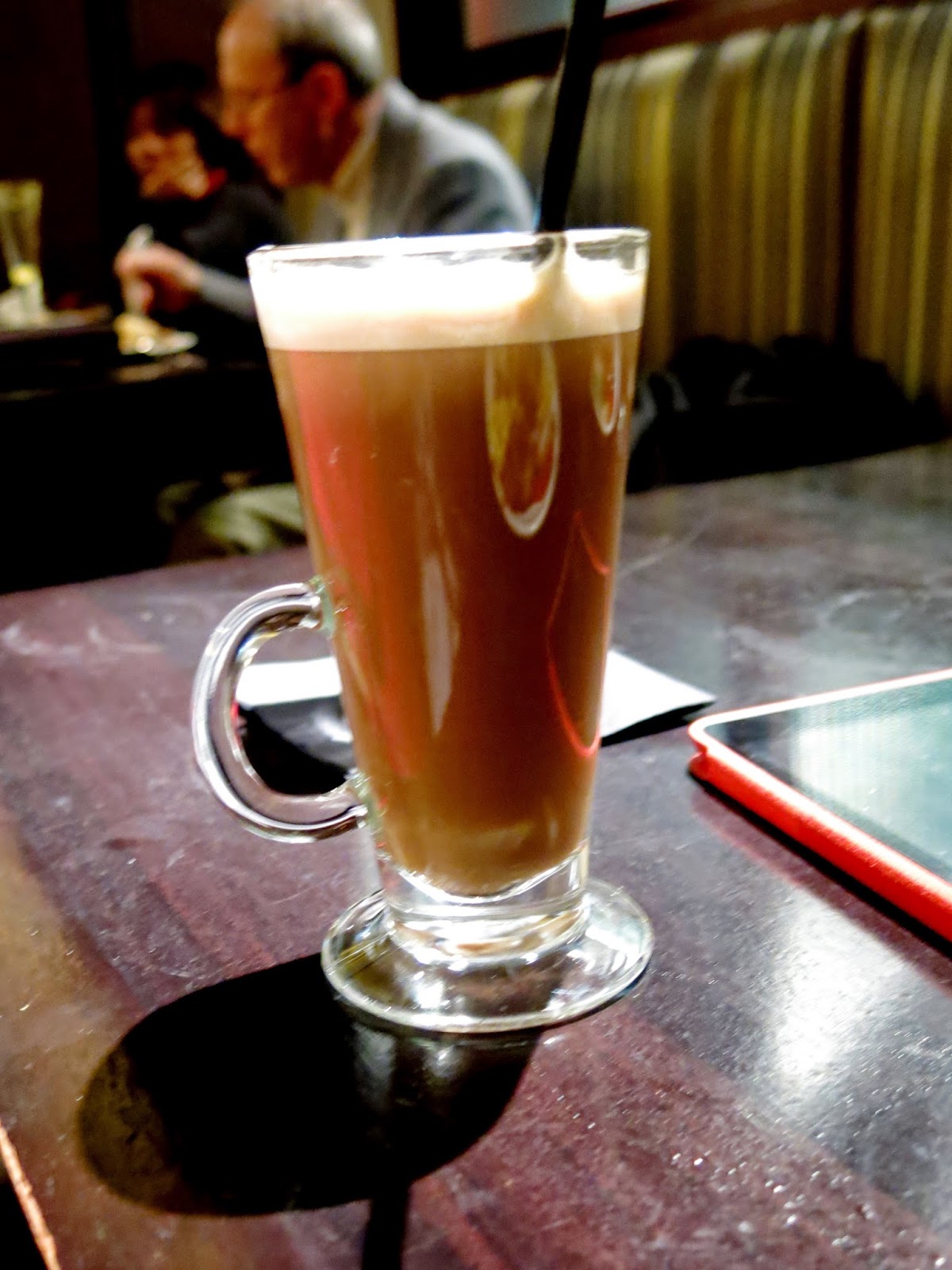 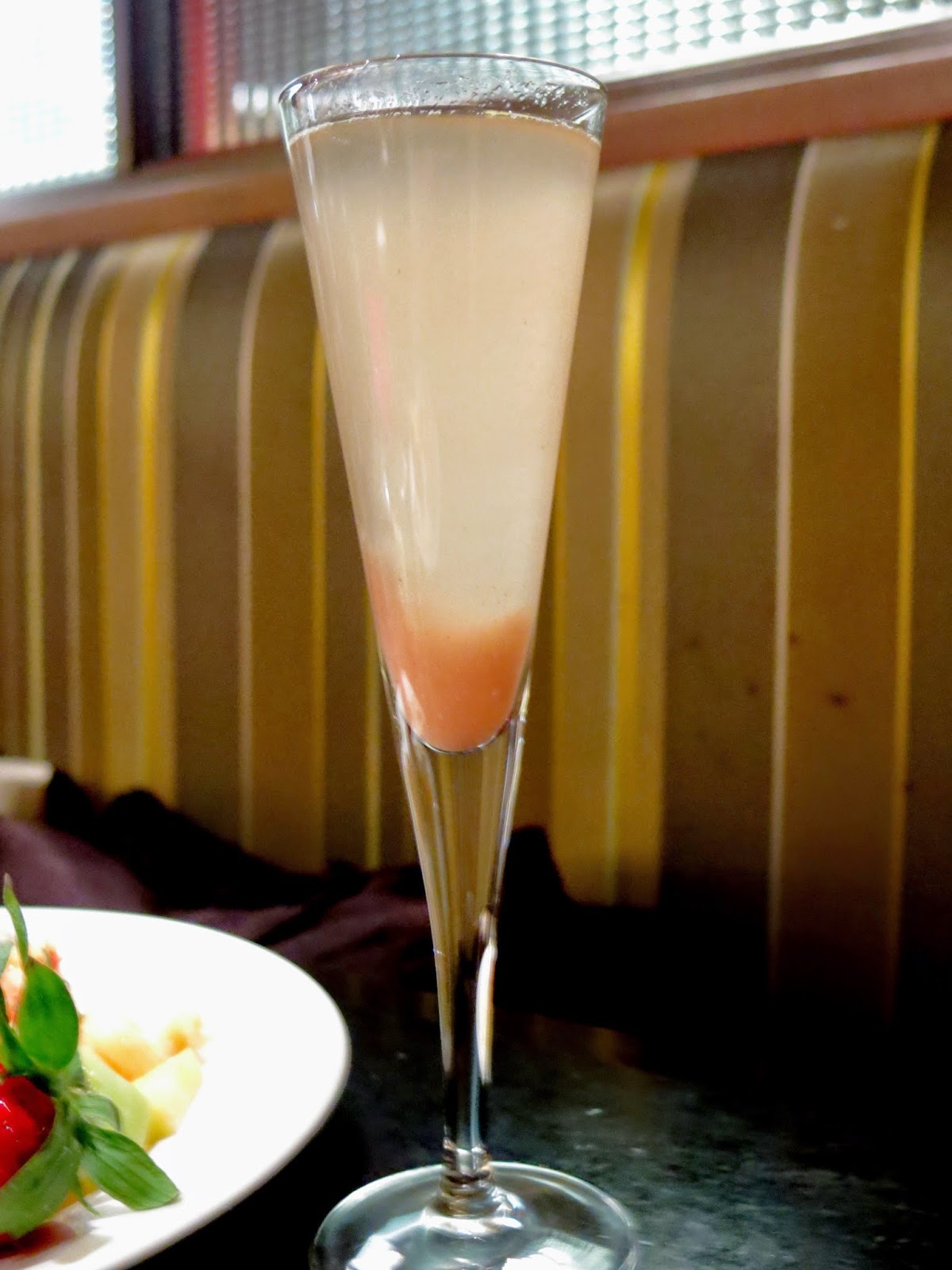 Quickly, a server came over to introduce himself and offered to take their drink orders.  The selection of teas, coffees, and cocktails was pretty tantalizing to say the least, so Brandy decided to go with a coffee cocktail called The Butternut, which combined Frangelico, butterscotch liquor, and brandy (the liquor, not the person).  Babka chose the Bellini, which was made in a pretty traditional manor with peach schnapps and prosecco. 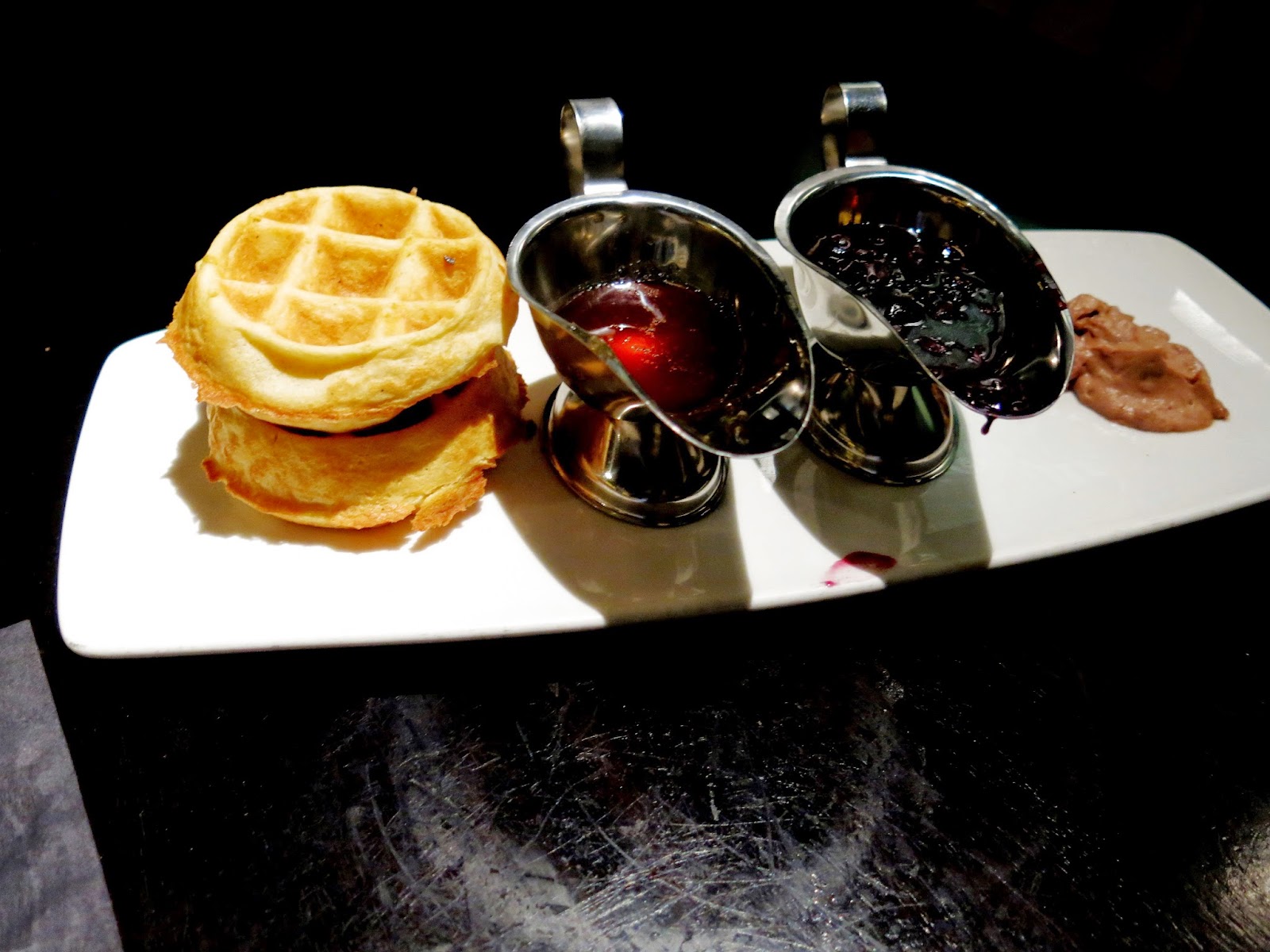 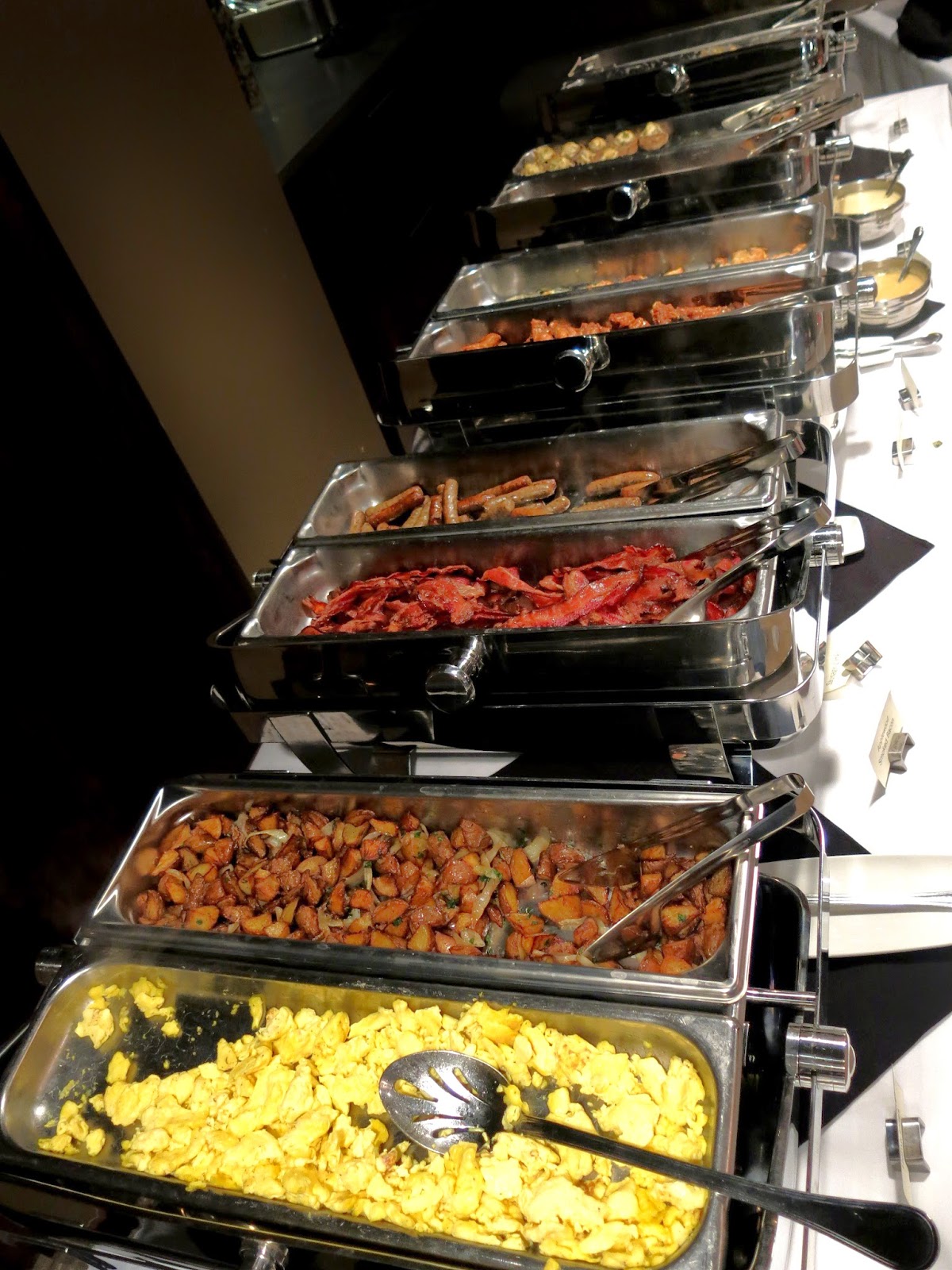 The buffet itself had a great mix of old favorites and signature dishes, all with a good splash of some of the best seafood in Chicago.  On the sweet side, there was beautiful scones and muffins, as well as made to order mini waffles with a selection of spreads and syrups.  The cold items consisted of some fresh and easy salads, like a nicely dressed Caprese and a savory Greek pasta.  On the hot table, there was some very hearty biscuits and gravy alongside staples like eggs, bacon, and sausage, as well as beautiful fresh crab meat stuffed mushrooms, a creamy chicken picatta, almond crusted tilapia, and Brandy's favorite dish of the day, lobster mac and cheese.  On the higher end side there was the premier hot bar with a custom omelet station, fresh carved prime rib, and some absolutely succulent king crab legs with drawn butter. 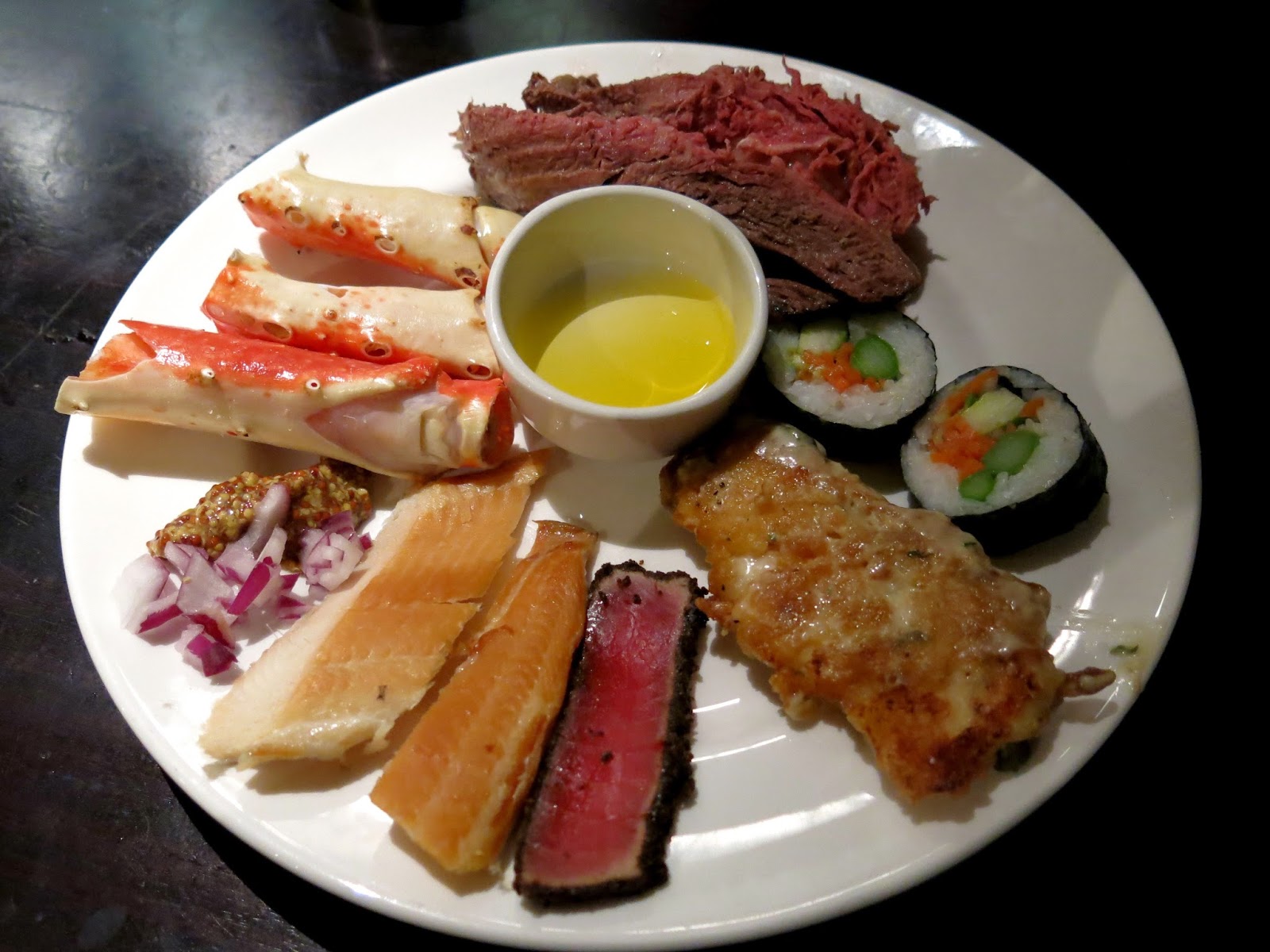 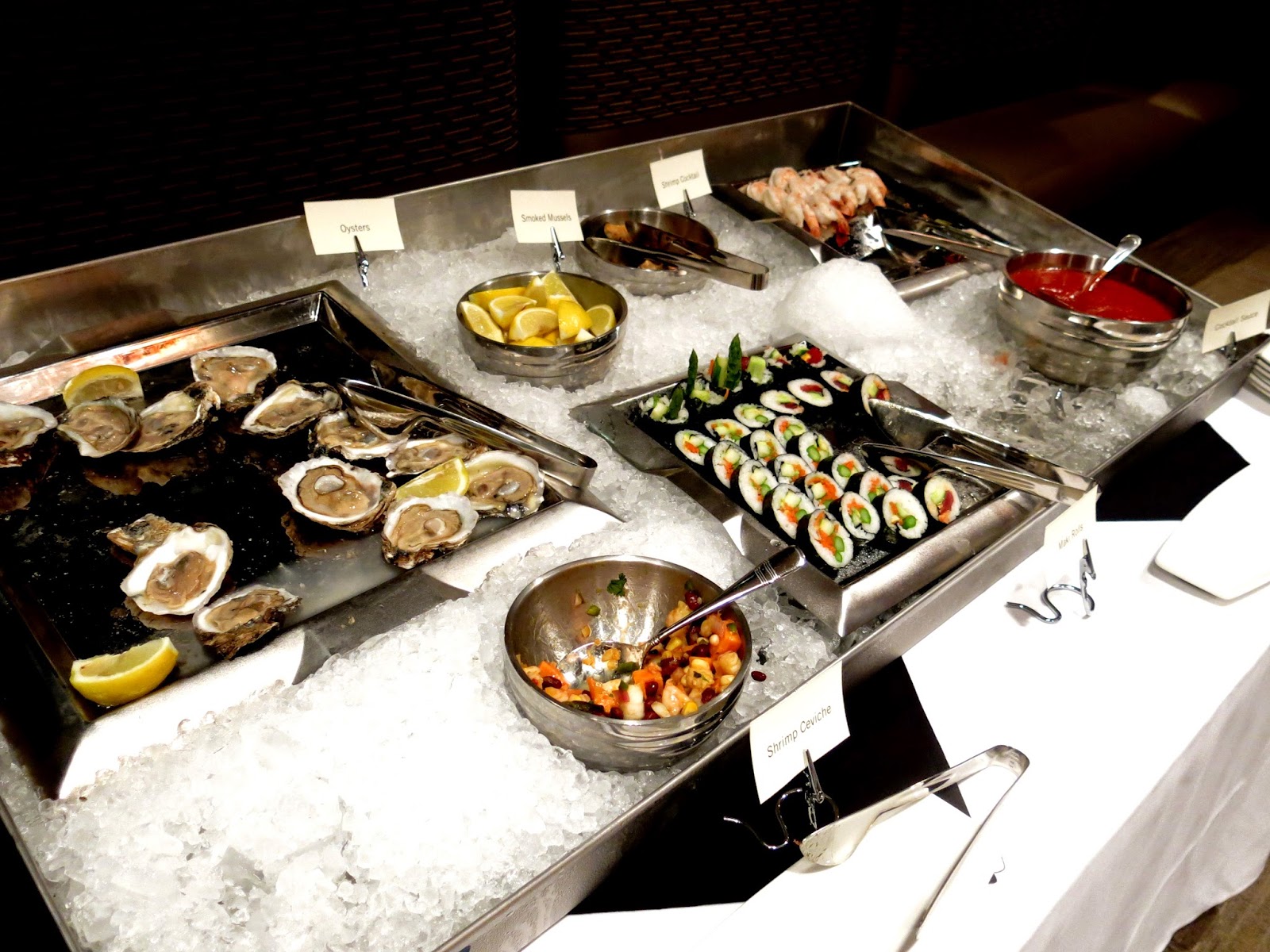 Devon’s seafood was also on full display (literally) with a cold bar showcasing freshly shucked oysters, sushi, shrimp cocktail, and some of the most beautiful sliced fish anyone is likely to see on offer anywhere.  Smoked trout and salmon, seared Ahi tuna, and peppered mackerel were just a few of the fresh and luscious looking seafood selections, all accompanied by gourmet condiments like capers, pickled ginger, spicy mustard, and seaweed salad, all made freshly in house.  "I simply adore high quality fish like this," Babka said as enthusiastically as she could (her managers had requested she refrain from moving her face too much to avoid marring her flawless skin). 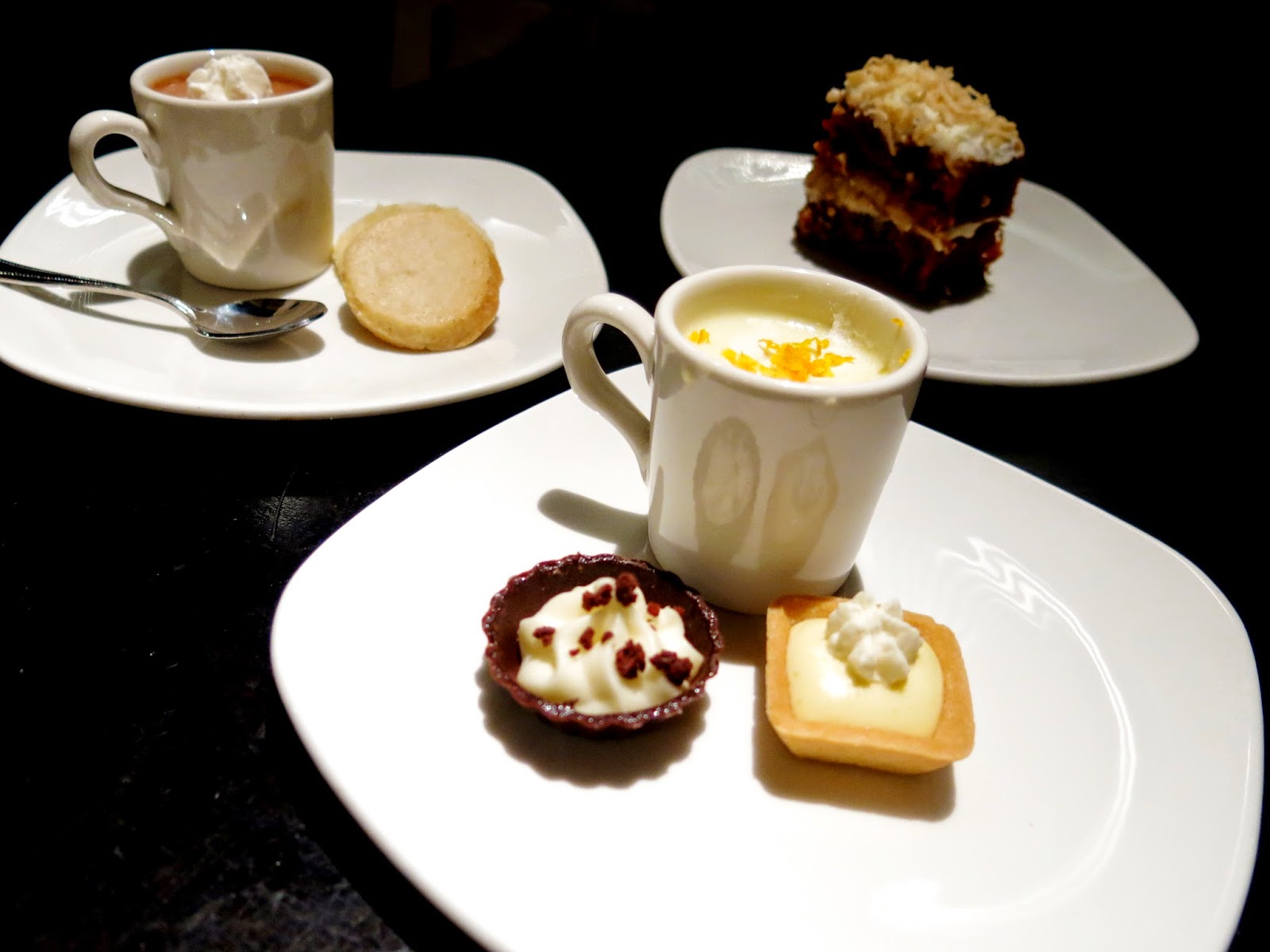 Lastly was Brandy's favorite part of any brunch buffet, the dessert table.  Smartly, the chef had decided to go with lots of small, flavorful bites, knowing that diners would already be pretty much stuffed by the time they got to the end of their meals.  Served in sweet little mugs were some rich and creamy treats like orange scented and chocolate panna cotta, which went perfectly with the selection of gem like little cookies.  The chocolate truffle cake and moist carrot cake were there as well for those smart enough to save some room (like Brandy), and for those looking for a lighter bite (like Babka), there was the beautiful, but intense key lime tarts as well as juicy chocolate covered strawberries.

Devon Seafood Grill is now offering brunch every Sunday, including Easter Sunday April 20th, from 10:00-3:00 with a very reasonable price tag of $45 a person (not including cocktails) or $16 for children 12 and under, which seemed to give Brandy an idea.  "Babka, dear, you know some talented makeup artists, don't you?" Brandy asked her friend.  "Yes, of course," Babka responded.  "I've been hearing about all these so called 'Ewe Tibers' and what not who can do anything with makeup," Brandy asked, "Could one of them make me up to look like I'm under 12?"  Babka, throwing care to the wind and allowing her face to crack into laughter, responded, "Brandy dear, my friends are makeup artists, not miracle workers!" 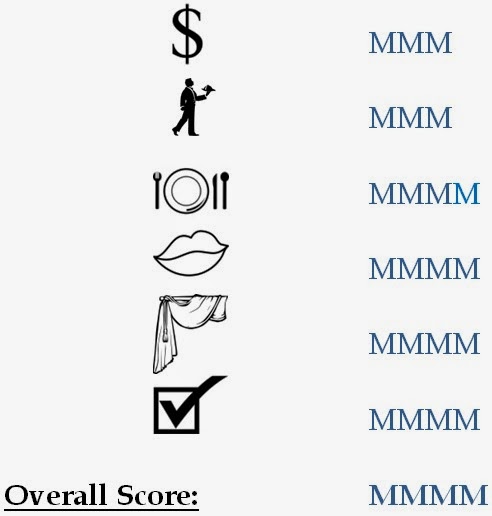