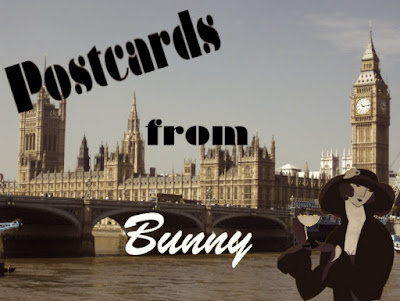 Greetings friends!  First off, we would like to issue an apology on behalf of Brandy, who had meant to grace us with a review as per usual, but due to an unforeseen incident involving a criminal, a wallet, and Brandy's unending wrath, we are instead bringing you some exciting news we've received via one of Bunny's lovely Postcards!
Bunny (whose latest adventures brought her to the southern coast of Cyprus on an excavation to find the long lost Temple of Baconopolis, a shrine to a very obscure god in the Greek arcana who governed over breakfast foods)﻿, has recently become quite taken by Mediterranean culinary delights, which is probably why when she heard that Chef Cat Cora was coming to Macy's on State Street to do a live cooking demo and a book signing for her newest cookbook, Classics with a Twist, she asked us to help spread the word.  We submit the following details of this event for your viewing:
What: Macy's Culinary Council Present Cat Cora Cooking Demo and Book Signing
When: Monday March 12 @ NOON
Where: Macy's State Street (Chicago, IL)
RSVP: The event is free. Seating is limited. Please call 1.800.329.8667 to reserve a space.

We suggest you do call rather quickly as Bunny has threatened to reserve all the seats for herself to ensure she gets to try whatever delicious dish Chef Cora decides to prepare.

*This is a sponsored post for which the writer's of this blog have been compensated.