2 Sparrows or Birds of a Feather Eat Together 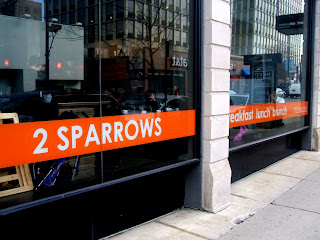 It seems that every year in mid February a universal desire springs up in the heart and soul of every Chicagoan for the warm embrace of grass under bare feet, for the soft smell of dogwood trees on the wind, and the taste of the freshest fruits a farmer's market can provide.  The desire for spring is so palpable that the over excited often begin dressing in short sleeves and sandals the moment the temperature reaches 40 degrees.  But alas, late snow storms often dash the hopes of the sun worshippers, and inevitably the Chicagoans are forced to retreat to their houses until the inevitable April thaw. 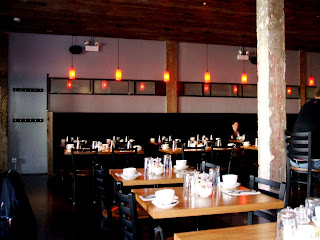 As always, Brandy has found a cure for this longing for nature's bounty in the form of an old friend, Bass Bronzeman, the famous woodsman and naturalist.  Taking his cue from Henry David Thoreau, Bass Bronzeman left traditional living three years ago and built with his own two hands a cozy 4 bedroom 2 bathroom "shack" high in the mountains of Canada.  On occasion, Mr. Bronzeman will reacquaint himself with civilization, and so dressed in three layers of plaid flannel shirts, he left his mountainous home for a quick visit with society and joined Brandy for brunch at 2 Sparrows in Lincoln Park.
Bass had an immediate fondness for the interior of the restaurant, which had plenty of natural sunlight pouring into a warm, open dining room full of woods and earth tones.  Brandy supposed that on a busy morning, what seemed to be a wide space might become very crowded and loud due to the closeness of the tables. 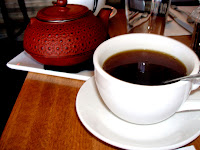 It took a few minutes before Brandy could get Bass to begin speaking to her (having only had himself for company for the past six months had caused Bass to internalize most of his dialogue) so she ordered a pot of Earl Grey to pass the time while he found his tongue.  Eventually, Bass seemed to realize he wasn't speaking out loud and he let out a creaky "Good Lord!" as he spied a few tasty looking dishes on the menu. 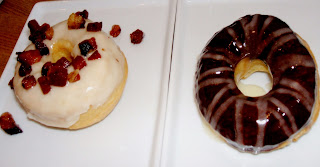 Brandy took the liberty of ordering some doughnuts to start them off.  The flavors of the day were Tiramisu and Maple Bacon.  Both doughnuts had a sort of eggy quality that put their texture somewhere in the range of challah bread.  The maple bacon had a lovely subtle icing and wonderfully crunchy chunks of bacon on its top.  "So this is what the country's been up to since I moved to the woods?" Bass mused while rubbing his forrest-like beard.  The Tiramisu doughnut had the same sort of texture, but sadly just tasted like a vanilla doughnut with chocolate frosting, sporting none of the coffee or rum like flavors the dessert is famous for. 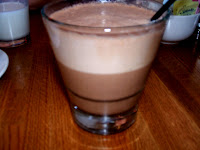 Brandy, spying an impressive cocktail menu, chose a concoction called the Chocolate Phosphate before the next course.  The cocktail, a sort of old fashioned chocolate egg cream but with curry spiced syrup, was a lovely change of pace for a breakfast cocktail, but Brandy wished for a bit more curry flavor. 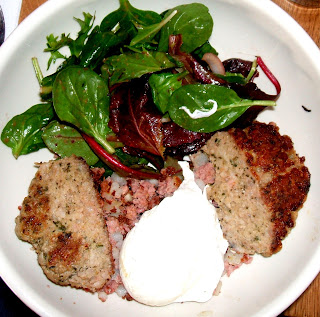 Bass ordered the Corn Beef Hash as his entree, a true meat and potatoes kind of meal, minus the potatoes, which had been replaced by more meat.  A small salad of greens on the side seemed to confuse the poor man, who commented that, "Someone sure put a whole bunch of garnish on this plate."  Brandy tried to explain that a salad is not necessarily a garnish, but Bass didn't seem to hear her as he eyed his neatly spiced bangers and corn beef.  Through mouthfuls of meat, he reported that everything was cooked and seasoned perfectly.  Poor Bass seemed to be perplexed by the poached egg, as he'd never had one before, and Brandy had to explain that the runny yolk was a good thing. 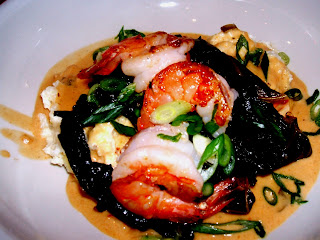 Brandy opted for the Shrimp and Grits, which came with sauteed greens and etouffee sauce.  She found the greens to be lovely and tender (despite Bass's concern that someone had placed "wet garnish" on her plate) and the grits were delightfully creamy.  The sauce had a wonderful soft spice to it, just enough to excite the taste buds, but sadly the shrimp, which while perfectly cooked and tender, were a little under seasoned.

Brandy greatly enjoyed talking nature with her very own mountain man in a restaurant that had an obvious appreciation for freshness and quality (as their menu changes daily).  Though a tad on the pricey side for brunch (entrees start at $9 and range up to $13) the portions and flavors do measure up to the dollars paid.  Brandy may still be looking forward to spring, but after sending Bass back on his way to his secluded retreat, she felt a little more content to wait out the snow and cold, as long as there are more comforting brunches out there to be had. 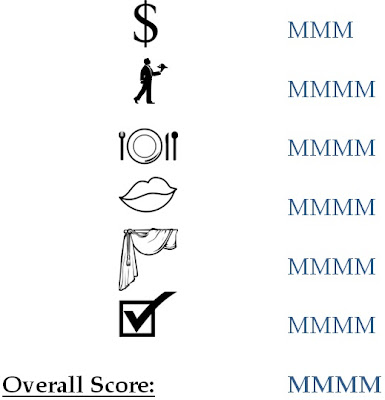 Posted by Bunny and Brandy at 9:21 AM