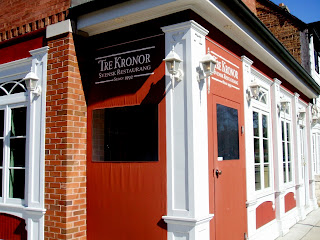 Its easy to become dazzled by the huge array of culinary delights available to the Chicago eater.  Its easy to get get bogged down by the glamorous plates of fashionable food, the sparkling cocktails, the handsome waiters, and the dolled up hostesses.  Brandy knows full well how easy it is to become spoiled and jaded by the pampering, the groveling, and of course, the freebies.  Luckily, Brandy also knows of certain spots in the city where, without sacrificing good quality food, service, or anything else she prizes so dearly, one can be once again pulled back down to earth and reminded of the simpler joys of life. 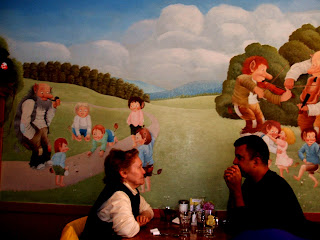 It was this desire that led Brandy to invite an old friend of hers, Babka (yes, THE Babka, glamorous Polish super model so famous she needs only go by her first name) out for a lovely brunch at the very Swedish Tre Kronor.  Babka had just arrived in Chicago after a very busy fashion week in Paris, having launched not only a line of faux fur bathing suits, but also a fragrance line that doubles as salad dressing.  After one look at the exhausted and bedraggled beauty, Brandy just knew she could do with the comforting food and surroundings of Northern Europe.  "I used to spend my childhood winters in Sweden with my Auntie," Babka sighed, "It was there that my love of fashion was first ignited when I designed my ski suit to be more figure flattering at the age of 4." 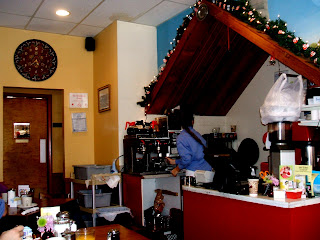 Once entering the quaint establishment, there is no denying their national affiliation.  A charming mural of Swedish fairytale creatures adorns one wall, a garland of Swedish flags festoon another area, and the entire place, though a little small, burns with a cheerful, casual atmosphere.  Though the room was small and closely packed, each table's conversation didn't seem to be competing with its neighbors.  Right away a cheerful waitress greeted them and began to list a massive array of daily specials (Brandy was mightily impressed by her memory until she noticed the chalk board listing them all over her shoulder). 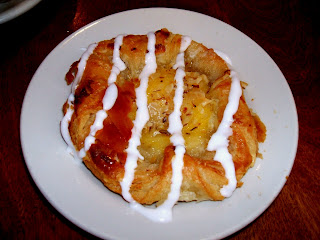 Brandy and friend decided to start with a fresh baked pastry; a Vanilla Hazelnut Danish.  It took some convincing for Babka to even consider ordering anything that wasn't a carrot stick, but once the confection was placed in front of them, there was no stopping her fork.  The pastry was flaky and warm with a filling that more resembled custard than the traditional cheese.  Brandy wished for a bit more hazelnut flavor, as the only hints came from small slivers of nut atop the custard. 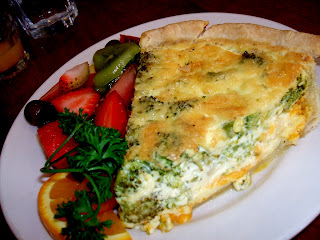 Babka's choice of entree was one of the quiche specials, specifically the Broccoli and Cheese.  Babka was quite taken with the incredibly creamy, yet slightly dense filling and the buttery, firm crust.  "I've eaten plenty of broccoli in my time, but never did I think it could be this delicious!" Babka exclaimed.  After a little probing, Brandy discovered this might have been because Babka hadn't tasted cheese in close to ten years. 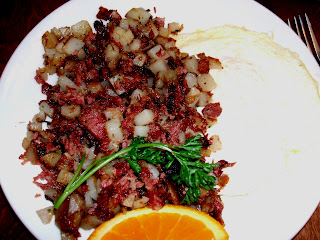 Brandy herself chose the Anders' Hash and Eggs.  At the waitress's suggestion, she ordered the eggs over medium to retain the texture of the white with just a little runny yolk to mix with the hash.  The hash itself was a lovely mix of salty corn beef and tender potatoes, which had a subtle herby flavor.  The whole dish was wonderfully tender and filling, with a smartly placed wedge of orange to cut the fattiness. 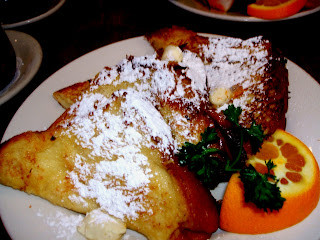 To finish, the duo split an order of Orange Vanilla French Toast.  The bread was wonderfully soft, with the orange flavor coming from the pads of melting butter, dotted with zest, that sat atop each slice.

Her friend's smile and vigor restored, Brandy escorted Babka from the restaurant (with an additional slice of quiche in hand) and sent her on her way back to the land of sparkle and salaciousness (otherwise known as the fashion business).  "You've inspired me, my friend," Babka said as they parted, "I shall stage a photo shoot where I am dressed as a vegetable, encased by cream and egg."  Brandy is quite certain that Quiche Wear will be the next hot thing, but she'd still rather eat the stuff than wear it. 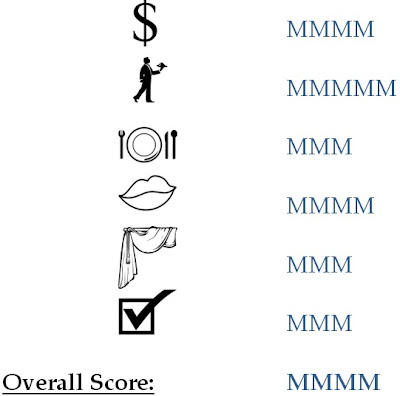 Posted by Bunny and Brandy at 9:37 AM