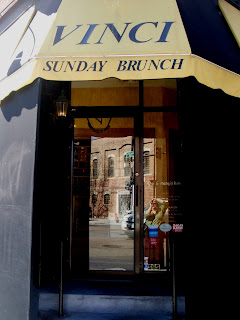 Ah Rome.  The art, the architecture, the history... the very scale and beauty of the place are enough to knock a tourist over backwards.  Of course, Brandy is anything but a tourist when it comes to Rome.  In fact, there was one infamous summer in her youth when Brandy threw caution to the wind, rented a Vespa scooter, and spent three months in a charming villa down the street from the gates to Vatican City (some say this part of her life was the actual inspiration for the film Roman Holiday, but Brandy has never confirmed this rumor).  She would often wile away the summer days on her balcony with a glass of Limoncello in one hand and a good book in the other.  Other days she would ride to Venice and hire a gondolier to pilot her down the canals for a few hours. 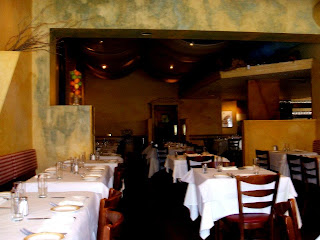 It is perhaps Chicago's unusually warm March weather that had Brandy longing for her days in Italy, so she shuttled Biscuit Brown down to Vinci, a fine Italian eatery on the border of Lincoln Park and Old Town.  Upon arrival, they were greeted like old friends by the host and taken to an empty table at the back of the vast space.  The restaurant had been decorated to reflect the airy and ancient feeling of Rome and Venice, from the faux marbled walls to the linens draped from the ceiling, to the murals of the country side painted on the walls.  "Some might say this type of decoration is hokey and old fashioned," Brandy said, "But I'm hokey and old fashioned too." 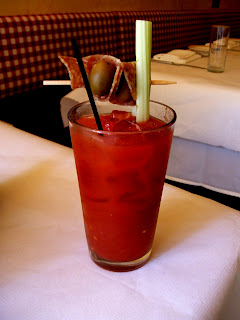 Brandy and friend started off with drinks.  Biscuit, as per her expertise, ordered a her favorite brunch drink in the form of Curt's Bloody Mary, the usual mix of spices, spirits, and juices, but this time also with Guinness and topped with Fontina stuff green olives wrapped in salami.  The result was a bit heavy, but very flavorful.  "One more of these and I'll need a wheelbarrow to get home!" Biscuit remarked.  Brandy opted for three drinks in one (no surprise really) by ordering the Gondola Volo; a flight of fruit flavored Bellinis in Strawberry, Peach, and Mango.  The drinks came adorably served on a little wooden gondola, which made Brandy smile.  All three were cheerful and packed with the true flavor of their listed fruits.  Brandy sided with the peach saying it tasted the most like sunshine. 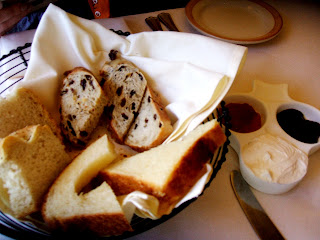 Brandy was delighted to find a bread basket being presented to the table, along with fresh whipped butter and jams.  "It's been a while since a restaurant thought to include a complimentary offering," Brandy grumbled as she slathered butter and apricot preserves onto a soft piece of raisin bread. 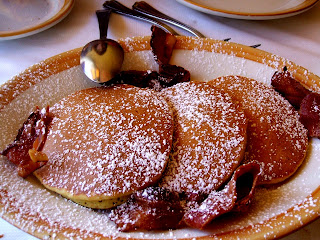 Brandy insisted on splitting a plate of Polenta Pancakes, which Biscuit didn't object to, since they were served with a generous helping of bacon.  Brandy very much liked the texture on the pancakes, which had a slight crunch to them.  Biscuit wasn't as fond, feeling they were a touch on the dry side (to alleviate this problem, Brandy simply drowned hers in the real maple syrup that had been provided on the side) 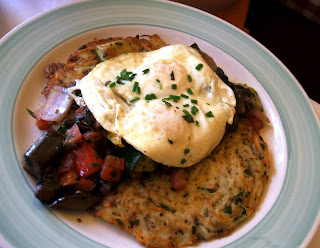 Biscuit's entree choice was the Potato Hash.  The shredded potatoes at the heart of the dish were nicely crispy, but the true star was the marinated vegetables on top, which consisted of eggplant, zucchini, tomato, and red onion.  "I'm obviously not a vegetarian, but if I was, I wouldn't be wanting for any meat in this here plate," Biscuit commented. 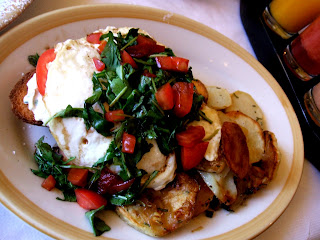 Brandy chose the Breakfast Bruschetta, two eggs over easy served on some crunchy toasted bread with spinach, tomato, and Balsamic vinegar.  Brandy felt the dish had the perfect mix of sweet and sour, though with the nature of the bread and its toppings, it was a bit difficult to eat both by hand or with knife and fork.  Once the bread had soaked up all the liquids though, it made cutting into it a bit easier.  The potatoes on the side were lovely as well, being nice and crisp on the outside and soft on the inside, with a delightful richness and subtle herby taste.
With her memories of bygone days in Italy fresh in her mind (and plenty of money in her wallet, for the entire meal came out to only about $25 a person), Brandy dragged Biscuit out to Lake Michigan, where she insisted they would be able to find a gondolier for hire.  Perhaps those three Bellinis were a bit too much for her after all. 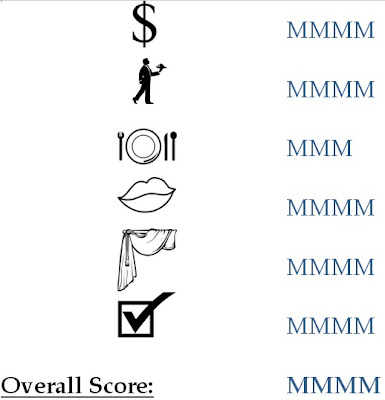 Posted by Bunny and Brandy at 9:41 AM