Wilde or The Importance of Being Epicurean 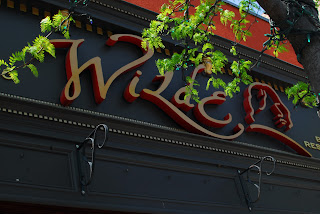 Last week, we extolled the virtues of vaudeville and the time honored tradition of the music hall scene, but this week we shall be exploring so called legitimate theater.  It is sometimes hard for people of this day and age to imagine having their freedoms stripped from them for something they couldn't help, like the color of their skin, what faith they practiced, or who they fell in love with, but Bunny and Brandy have witnessed plenty of dark and intolerant times, as well as the changes that came about to bring the world out of the darkness.  A significantly dark moment in Brandy's life was the day she heard of the death of Oscar Wilde, who succumbed to a misdiagnosed ear infection caused by a fall he took while in prison for daring to fall in love with another man.  She remembers feeling as though her heart had stopped, her limbs had frozen, and she couldn't think of anything else other than "He's gone.  That great man is gone." 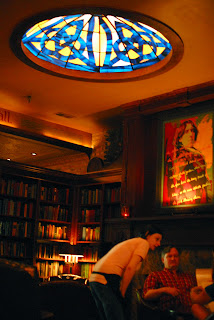 Brandy could never say why Oscar Wilde was so important to her.  She adored his plays and devoured The Portrait of Dorian Grey, but most of all she worshiped him for his fairy tales, in which his whole tragic idealism of self sacrifice for love was laid out for those with eyes to see.  These, she would tell any one who would listen, were Wilde's true legacy, the crown jewels of his treasury.

Upon hearing that there was a restaurant in Lakeview that paid tribute to dear old Oscar, Brandy dragged her hapless companion Bunny as well as Biscuit Brown to partake in their brunch selections.  They arrived to find an interior decorated like a proper English lodge; dark woods, dimmed lighting, a small library under a dome of stained glass, and a gorgeous sidewalk setup with Victorian style street lamps and plenty of hanging plants and flowers to delight the eye.  Brandy particularly enjoyed the multiple portraits of Oscar himself adorning the walls.  They chose seats outside, so as to partake in the particularly lovely weather. 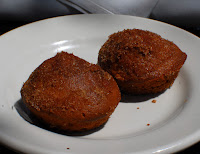 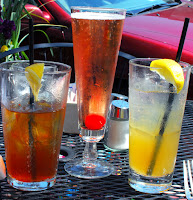 The table was presented with a little snack to start off with, some small crunchy cinnamon coated muffins.  Drinks were ordered straight off: for Bunny a Sweet Tea Vodka and Lemonade, for Brandy a Raspberry Iced Tea, and for Biscuit a concoction called Oscar's Favorite, made with champagne, blue berry vodka, and raspberry liquor.  "Wilde asked for champagne on his death bed," Brandy informed them, "They told him he couldn't afford it, and his last words were, 'I am dying as I have lived, beyond my means.'  Witty till the end, that man."  Biscuit politely nodded while Bunny rolled her eyes. 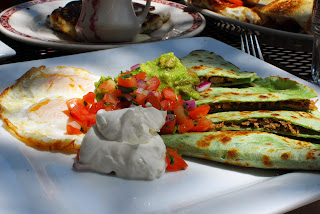 For her entree, Bunny chose the Carnitas Quesadilla and Eggs, a combo of shredded pork shoulder with cheese, sour cream, salsa, and guacamole.  With the slightest hit of spice, the dish was perfect for such a spring morning.  The coldness of the guacamole and sour cream combined nicely with the warm pork and cheese, and the eggs were cooked perfectly. 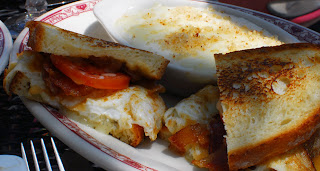 Biscuit's choice was the Egg Sandwich, a perfect breakfast combo of eggs, bacon, caramelized onion, and tomato on toasted bread.  Though a little sloppy to eat (as egg yolk spilled everywhere on the first bite), Biscuit found this to be a very hearty and filling breakfast.  As her side, she chose the Irish Cheddar Grits, which had the perfect texture.  "As a Southerner I am a grits connoisseur, and I must say I approve," she stated merrily. 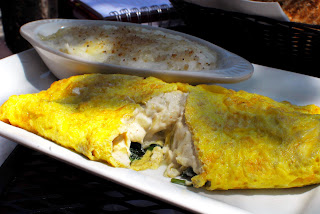 Once they stopped Brandy from spouting every Wilde quote in the book (she carried her Complete Works of Oscar Wilde wherever she went) she managed to order the Spinach and Artichoke Omelet, also with a side of the Irish Cheddar Grits.  The omelet was surprisingly delicate and thin, encasing a rather delicious burst of cream cheese and veggies.  Indeed, that day, Brandy was the envy of the table, with the other two ladies continually eyeing her plate as she went on some diatribe about color schemes in the original production of A Woman of No Importance. 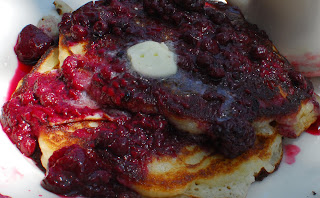 As a last little taste of sweetness, Our Ladies and guest shared a plate of pancakes, compete with berry compote.  The pancakes were the perfect mix of fluffy inside and crispy outside, with a freshly griddled look to them.  The berry compote was a nice change of pace from maple syrup, dousing the pancakes in the royal purple of luscious blackberries. 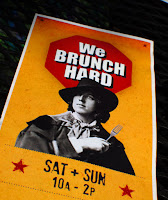 On the upper side of average on price (about $12 a plate), but with an atmosphere that can't be beat, Wilde is perfect for both literary enthusiasts and their less enthused companions.  Though if you should happen to visit while Brandy is there, be prepared for a history lesson, as well as the pop quiz following dessert. 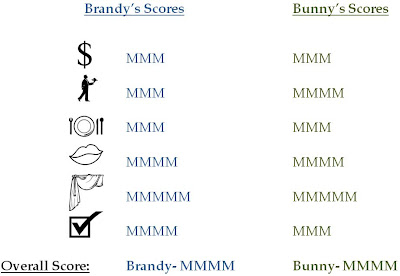 Posted by Bunny and Brandy at 8:22 PM