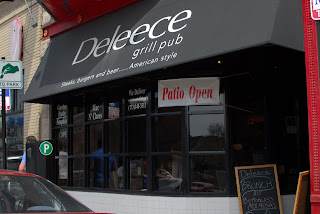 As Bunny and Brandy have been sworn to secrecy about their part in organizing a certain Royal Wedding, not much can be said about their absence from the brunch scene.  "Managing to stay out of all those pictures was quite the trick!" Brandy proclaimed.  Bunny simply reminded her "But there's nothing a good hat can't hide." 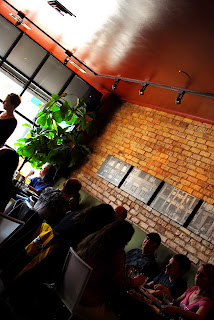 Our Ladies chose to get back into the swing of things by brunching at Deleece Pub and Grill on Clark (not to be confused with Deleece restaurant on Southport, which offers a similar brunch menu).  Surrounded by some of the best brunch spots Lakeview has to offer including Bunny and Brandy favorite Socca only a few doors down, Our Ladies had high expectations for this establishment.   The interior was a little stark and heavy for brunch with nothing much to look at other than an industrial fire place and a stylishly cracked slate floor.  Our Ladies were also disappointed to see there weren't many beverage choices, i.e. coffees, other than the special of the day, $15 for unlimited mimosas ("If I wasn't recovering from the open bar at the wedding, I'd order two glasses for myself," Brandy whispered). 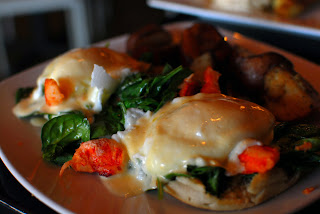 Bunny's choice for brunch was a delicious sounding Lobster Benedict, served with a white truffle hollandaise.  Bunny was delighted to see that no concession was made for the dish, which came with great hunks of lobster meat over wilted spinach, all of which tasted fresh and bright.  The eggs were perfectly poached and the hollandaise too was outstanding with that savory quality of the truffle coming out with every bite, making one's mouth water for the next bite before you could even finish chewing.  The dish was served with some lovely roasted potatoes on the side, which had just enough flavor to convince Our Ladies that they had not just been thrown onto the plate to fill space.  It is very sad to report that although this dish was exquisite, Bunny found a rather large egg shell sitting on top of one of the benedicts.  The very kind server offered to take the dish off her bill or replace it as soon as the atrocity was discovered. 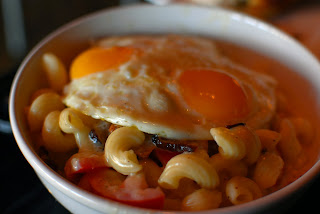 Brandy zeroed in on an unusual dish, Breakfast Mac and Cheese; a mixture of pasta, beschamel sauce, chopped tomato, and bacon with two over medium eggs on top.  Her choice entree was brought out in a giant white bowl, looking and smelling magnificent.  Of the eggs on top, one was cooked beautifully, and the other a little over done, with no yolk to run into the rest of the dish.  Though usually not a fan of raw tomato, Brandy appreciated it in this dish for its ability to break up the richness of the sauce.  The bacon also was a nice touch, not only for its smokey flavor, but for a bit of different texture. 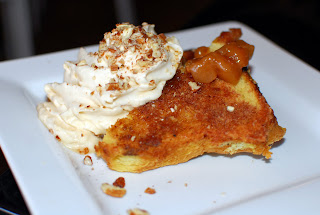 Brandy also opted for a half order of French Toast, which came with caramelized pears, pecans, and whipped cream.  The French toast had a lovely ginger flavor to it and was delightfully crunchy on the outside.  She soon wished she had splurged and ordered the full version to take home.

Though the food at Deleece was amazing, the service left something to be desired.  Water glasses went unfilled and the bill took quite a while to reach the table.  This would have been excusable, except for the fact that the restaurant was practically deserted (perhaps there were more people out on the patio Our Ladies didn't know about).  All in all a very fine brunch when the food was considered, and for the price (only about $15 a person) generous portions and excellent quality are to be found.  Perhaps those $15 mimosas aren't such a bad idea after all... 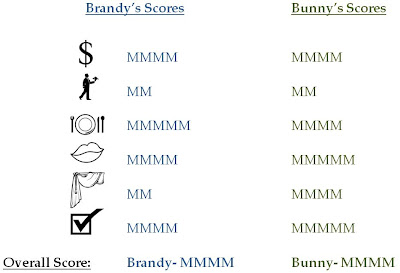 Posted by Bunny and Brandy at 8:57 AM