Bongo Room or Not Enough Room 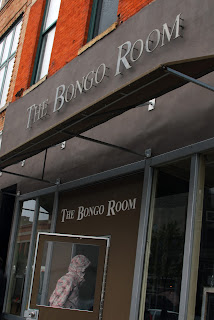 There are not many people who remember the good old days of vaudeville any more.  Oh, those sacred days of slapstick, dancers, jugglers, and whatever rag tag act had managed to talk their way onto the stage that night... it was a glorious time indeed.  And just as there are few left who remember those days, there are even fewer left who remember a certain pair of girls who used to sell merchandise in the lobby of those theaters, doing little dances and jokes for the folks waiting to take their seats, hoping that some day a producer would grant them a ten minute slot and they would become the darlings of the music hall scene.  Their opportunity finally arrived one night at a shoddy little theater in Hampshire called The Bongo Room when Melba Toast and her Toastettes acquired food poisoning from a bad batch of matzoh ball soup.  The girls hastily painted a sign on an old piece of cardboard, calling themselves Bed & Breakfast: The Girls with the Dancing Tongues to emphasize their brilliance at witty repartee.  Sadly, the gentlemen in the audience took their act's title in quite another way, and although the girls did a splendid two-step routine with a pair of parasols, they were quickly booed off the stage. 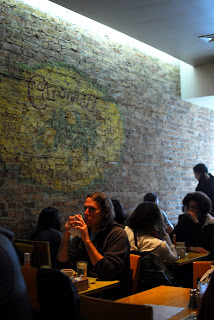 It is because of this event that Bunny and Brandy were not exactly excited to visit yet another Bongo Room, this one in the Wicker Park neighborhood of Chicago.  Upon arrival, they were told the wait would be about 45 minutes and to check back in half an hour.  Rather than squish into the already crowded back bar, Our Ladies decided to visit a sweet little coffee shop next door, The Worm Hole, which seemed to be a steamy celebration of everything 1980's.  After a quick, small, and rather expensive Chai Latte, Bunny and Brandy checked with the hostess and were told they hadn't quite made it up the list.  After almost another 45 minutes of waiting Our Ladies were finally taken to a table, albeit a small and drafty one in the middle of a rather noisy floor.

The interior was rather stark and colorless, which Brandy found surprising for a restaurant that only serves breakfast and lunch.  "Also, they have a full bar," she whispered to Bunny, "That seems rather strange for somewhere that doesn't even serve dinner, but I must say I'm glad to see it."  But having already had their fill of drinks next door, they decided to get right to the food. 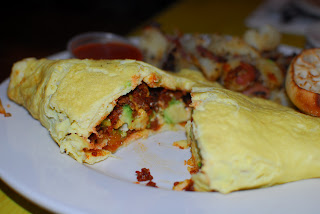 Bunny chose an omelet that contained chirizo, avocado, potato,and chihuahua cheese.  The omelet was gigantic, completely encasing the filling under the pillow of eggs.  The eggs themselves were unexpectedly fluffy,and the filling was not too spicy, with the chirizo being the most present flavor.  Bunny worried that there wasn't any cheese in the dish. but Brandy haughtily insisted that perhaps because the chihuahua cheese was mild that she simply wasn't tasting it.  The potatoes on the side had an unexpected spice to them as well. 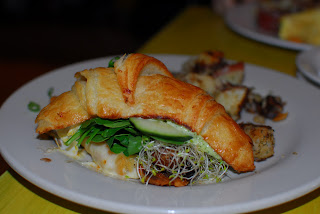 Brandy decided on the Vegetarian Croissant Sandwich, which came with cucumber, alfalfa sprouts, spinach, Muenster cheese, and an egg served on a croissant.  As Brandy chose an over easy egg, the dish was very difficult to eat as a sandwich, and so she eventually opted for a fork and knife.  The croissant was nice and buttery, as well as being perfectly toasted, and all of the veggies were fresh and light.  Sadly, there seemed to be a distinct lack of cheesiness to Brandy's dish as well ("I think they forgot my cheese altogether," Brandy huffed upon cutting into the sandwich), which Bunny could not help snickering, "Perhaps the cheese is just too mild." 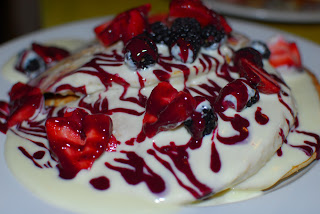 As a close, Our Ladies decided to split an order of White Chocolate 4 Berry Cheesecake Flapjacks, a confection so impossibly delicious sounding that surely it could not be as good as its title implied.  As it happens, it was.  On the first bite, both Our Ladies were plunged into pancake bliss.  Not only were the berries fresh and sweet, not only was the white chocolate sauce creamy and rich, but the flapjacks themselves (each of which was about a foot in diameter) were moist, fluffy, and perfect in every way.  It was a good ten minutes before Our Ladies were able to speak after cleaning that particular plate.

Barely after standing their table was cleaned and Bunny and Brandy were sent on their way.  Their uneasiness with going to Bongo Room seemed to have been cured, though as Bunny pointed out, it was probably a place better left for a week day morning when the crowds wouldn't be as bad.  With reasonable prices for the amount of food received (about $10 a dish on average) going to Bongo Room was well worth the memories of the shattered dreams it brought up.  Perhaps, some day, Bed & Breakfast will make their triumphant return to the stage, but for now, Bunny and Brandy will settle for another order of those pancakes... 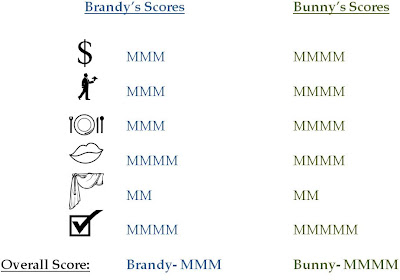 Posted by Bunny and Brandy at 6:30 AM