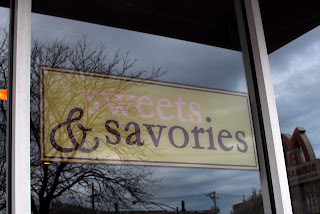 A few weeks ago, Bunny and Brandy tackled one of the hardest questions about brunch; to buffet or not to buffet.  This week, they decided to tackle yet another decision that wracks the brains of brunchers everywhere: is the Prix Fixe menu really worth it?  They decided to test the waters at Sweets and Savories, an unassuming little spot just shy of the DePaul campus which offered a three course brunch with tea and coffee included for just $16 a person. 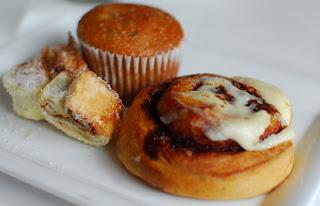 Upon entering, Bunny and Brandy found Sweets and Savories to be a rather cramped and under decorated space (though the crampedness might have been due to a setting for a large party in the middle of the floor).  "If you're not going to put up any art," Brandy huffed, gesturing to a large unadorned taupe colored wall, "At least paint the bloody wall an interesting shade." The staff seemed very friendly and eager to please, taking them to a table by the window and immediately presenting them with their first course, a plate of assorted breakfast pastries, including a rather average blueberry muffin, a slightly hard and cold cinnamon bun, and some rather nice cinnamon rugalas. 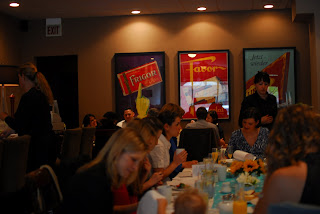 Our Ladies each ordered a cup of tea; for Brandy one of the fancier teas, a Raspberry Pomegranate Green Tea, where as Bunny went for some good old fashioned English Breakfast Tea.  "Good morning for a cuppa," Bunny sighed, "Though, not many mornings are bad for a cuppa."  Sugar was provided in a neat little bowl on the table, but sadly their request for some milk for their tea went unheeded.

For their second courses, Our Ladies had some decisions to make.  Bunny settled upon the Butternut Squash Soup, which was rather nice, though she wasn't quite sure about the addition of Gorgonzola cheese to it.  Brandy rather liked it, saying that it helped to cut the sweetness of the soup, which was also laced with cinnamon.  Our Ladies both agreed the soup could have stood to be a little more hearty.  Brandy chose the Irish Oatmeal.  She felt it was a little watery, and despite a slight brown sugar flavor and having some dried fruits on top, it was rather bland. 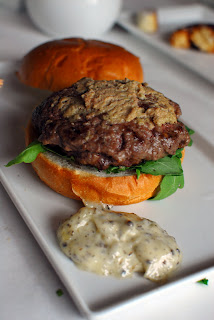 For her final course, Bunny chose the House Burger with Duck Patte and Truffle Mayo.  As sides were not included in the Prix Fixe menu, the burger came simply served, with just a bit of lettuce for garnish.  It was very nicely cooked, still pink and juicy on the inside, and Bunny thought the truffle mayo was a very nice touch. 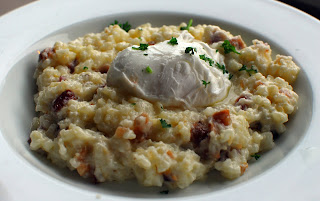 Brandy decided upon the Breakfast Risotto, an unusual sounding twist on the traditional diner dish, complete with bacon, white truffle oil, and a poached egg on top.  The consistency of the risotto was almost more like grits, but that wasn't necessarily a bad thing.  It was cheesy and rich with flavor, though the white truffle oil wasn't particularly noticeable.  The egg on top was cooked perfectly, which is always a plus in Bunny and Brandy's book. As a special surprise, Our Ladies were treated to one more dish, a plate of French Toast.  Though tasty without being greasy, there was nothing special about the dish, which came with sliced strawberries and maple syrup.  "Some caramelized peaches or a more interesting bread would have been loads better," Bunny whispered, and Brandy nodded in agreement.
After all, they did decide that for the money spent, the brunch in general was worth the price.  The main thing that seemed the stick with Our Ladies was that Sweets and Savories can't quite seem to decided whether it is an upscale establishment, or a casual one, and if only they would pick one or the other, a wonderful spot could start to flourish properly. 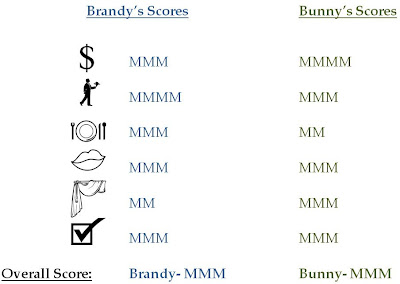 Posted by Bunny and Brandy at 9:20 AM