Hearty Boys or The Case of the Hidden Hideaway

The phrase comfort food is so subjective.  For some, a simple pancake can be as unfamiliar  as frog's legs, and for others it can be the definition of their childhood memories of Sunday morning.  So when a restaurant declares itself to be a "comfort food" restaurant, the hope would be that they have something for everyone.  Not just something to please their palate, but something that will bring back memories, light a warmth inside them, and generally, well, comfort them.  Such is the declaration made by Hearty Boys of East Lakeview.  Tucked between unassuming store fronts down Broadway, one would not expect to find anything more than a diner or small cafe upon entering.  But Bunny and Brandy know better than to judge a book by its cover, or rather a restaurant by its neighbors. 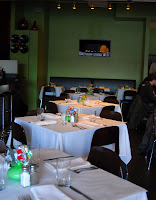 Once again joined by Biscuit and Birdie Brown (they seem to think this blog is recording their adventures and that Bunny and Brandy are their sidekicks), Our Foursome entered Hearty Boys a pitiful 1/2 hour before they stopped serving brunch.  Still happy to accommodate the late comers, a cheerful waiter to took them to a table in front of a fanciful electronic fireplace.  That, combined with exposed brick and adorable "recyclable flowers" on all the tables definitely established the comfort vibe, while still retaining a certain level of sophistication and modernism.

Biscuit and Brandy, ever the shining examples of sobriety, ordered drinks first.  For Biscuit, a Vermont Coffee.  Spiked with maple bourbon and topped with allspice whipped cream, the drink immediately plunged Biscuit into a quiet, happy place within herself.  Brandy ordered the Roasted Pear Belini and was disappointed that it tasted of champagne and nothing else.
No messing about with appetizers this week, Our Party went straight for the proverbial jugular.  First up was Bunny with Chicken and Waffles.  The waffle was sweet, the chicken savory, and their marriage was in heaven.  Bunny reported that the chicken was possibly the greatest fried chicken she had ever consumed, which is saying something as she used to know a certain Colonel with a certain secret recipe on an intimate level.  Rumor has it, she was responsible for the inclusion of the 4th spice. 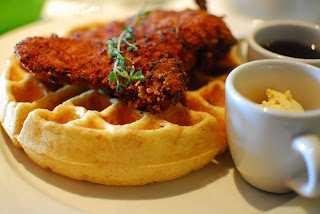 Brandy too opted for a waffle, but of a much different sort.  The Chocolate Cherry Waffle turned out to be just what Brandy needed to lull her into a state of utter comfort.  Not too dense, but bursting with chocolaty goodness, this was the ultimate sweet indulgence.  The sour cherries on top helped to break up the richness of it all.  As a side (and so she could delude herself into thinking she was ordering something healthy) Brandy also requested the Spiced Apple Couscous.  The dish was warm an soothing, hearty but not heavy, and a very unusual alternative to traditional oatmeal. 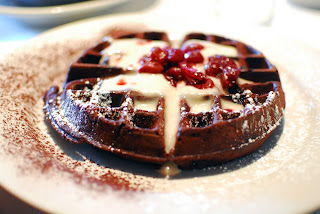 Birdie's choice was the Breakfast Dog, a chicken and apple sausage, wrapped in pancake batter and served on a stick ("As all food should be!" declared Birdie).  Yet another dish with the perfect combination of sweet and savory in one bite, it was enough to make an over stressed (and possibly hung over) Birdie smile.  The bite in fact was so sweet that the authentic maple syrup served on the side wasn't even necessary.  Birdie also ordered a side of biscuits with pumpkin clove butter.  While the biscuits themselves were authentically southern, the real standout was the butter, which was sweet and spicy, like a fire made with rock candy. 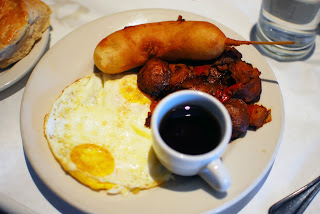 For Biscuit, an order of Andouille Biscuits and Gravy, more southern fair for the Southern Belle.  The sausage had the kind of snap one expects from quality and just the right amount of kick to it to make one's morning come alive.  On the side were Hearty Boy's prided Smokey potatoes, which did not disappoint in their smokiness. 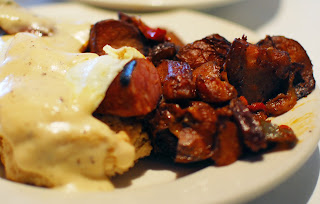 As far as prices go, Hearty Boys cannot be beat.  For the most part, every dish on the menu didn't top $10, yet the quality and quantity of the food presented could have warranted much higher prices.  It was a shame Our Ladies and guests showed up so late for brunch that day, as the food at Hearty Boys lulled them into such a state of relaxation and bliss that they could have camped out at their table for the rest of the day.  As it was, the momentous effort of standing up and leaving was about all the exercise anyone of Our Foursome could handle.  Brandy suggested to the waiter as they left that they could have at least provided gurneys for the guests to assist their journeys home.
The Short and Sweet Review: 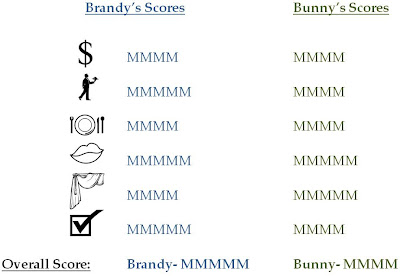