Before the blizzard of 2011 hit (or as some have dubbed it "Snowpocalypse") our dear Bunny attended an event so peculiar, so amazingly insane, so suicidally mental that it can only happen once a year.  That's right, Bunny attended the Polar Bear Plunge, where rugged and quite cranially challenged personages leap into the freezing cold waters of Lake Michigan.  Of course, Bunny may have misunderstood the nature of this event, as she had brought with her a bucket of fresh mackerel as snacks for the participants, but never the less, she had a wonderful time.  She also met a very interesting lady by the name of Betty Blanco, a naturalist and survivalist who was eager to sample this strange meal called Brunch that Bunny was so enthusiastic about. 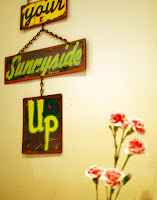 So the following morning, off they went, along with Brandy of course, to the West Side's own Breakfast Club, a quaint pink palace, hidden among row houses in an industrial neighborhood.  The interior of the Breakfast Club was cute and kitchy, complete with giant eating utensils on the wall, a pink flamingo oddly placed in a pitcher, and servers wearing pink tops to match the wall paper.  The tables were packed in tight and the vibe was surprisingly bustling, considering the quietness of the outside street.  "Do you think they would give me the name of their decorator?" Bunny was heard to whisper. 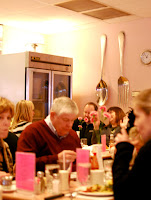 A few minutes waiting brought Our Ladies and guest to a table underneath an informative white board, which encouraged patrons to try Breakfast Club's famous cinnamon rolls.  Other items on the menu proved to be a mix of traditional and unconventional, but nothing too out of the norm.  The one surprise was the extensive bar selections for a place that doesn't even serve dinner.  And at about $5 cocktail, Brandy seriously thought about squandering her entire "Change found of the Street" fund.  "It's either this, or that unicorn ash tray I saw at a thrift store," she pondered. 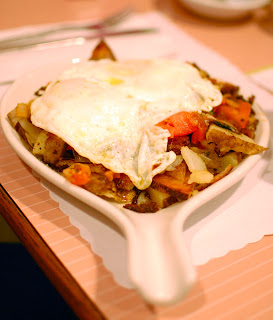 Betty Blanco ordered a Skillet Breakfast, complete with eggs, potatoes, meats, and veggies.  It was a filling selection indeed, though she did insist that the individual components were rather bland.  It was only upon combining them together that the dish began to come alive.  "Not quite what I'm used to, mind," she said, "I've been cooking over a camp fire in the wilderness for the last 5 years.  Things just don't taste the same to me if they haven't been roasted over pine cones."

Brandy indulged her savory tooth this week by ordering the Bacon Avocado Burrito with a side of classic French Toast, supposedly another one of Breakfast Club's specialities.  The burrito came with a side of house fried potatoes, which while pleasantly crunchy, didn't have much flavor.  The burrito itself was doused in what the menu called "Ole Sauce" which was a tad on the spicy side, flavored with bell peppers and tomato.  It did the trick with the packed and dense burrito, blending well with the coolness of the avocado and cutting through the fattiness off the bacon.  The French Toast, though it was only a lowly side dish, was the real star here.  Made from challah bread, the French Toast was so fluffy and lovely, so cinnamony and rich, that Brandy regretted her choice of entrees and debated ordering more French Toast to go. 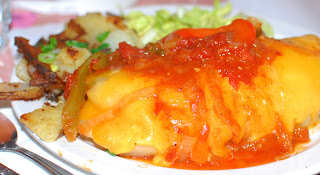 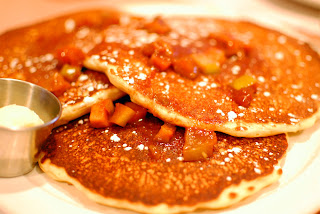 Bunny decided both her sweet ans savory cravings needed quenching, so she ordered Stuffed Potato Pancakes and Taffy Apple Pancakes.  The stuffed potato pancakes came plated more as little sandwiches, with the pancakes forming the bread and mozzarella cheese and bacon as the filling.  A delicate balance must have been employed not to render them too greasy, but they were decidedly rich.  The Taffy Apple Pancakes on the other hand were a tad lacking.  Though the pancakes themselves were fluffy, not too dry, and tasted of cinnamon, there was not nearly enough of the apple and caramel topping to render them interesting for more than a few bites. 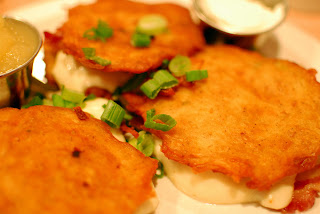 A tad over priced considering the quality and selection of dishes, Breakfast Club does make for a crowd pleaser, offering comfortable and safe selections.  There are definitely more exciting things to be found in the great city of Chicago, but for a quirky yet comforting atmosphere, and some of the most cheerful servers one is likely to find on a Sunday morning, Breakfast Club is worth the visit.
P.S.  When leaving this establishment, beware.  A monster so horrible lurks just to the left that no name can summarize its terrifyingly mangled edifice except... Mr. Blobby. 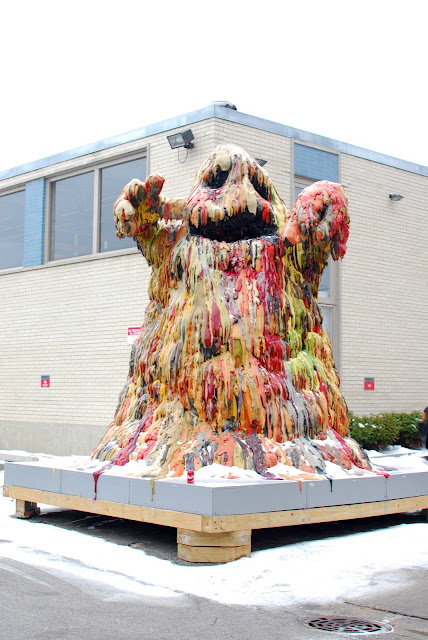 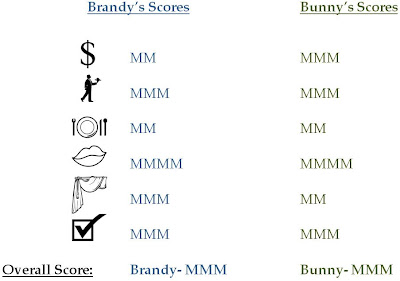