Yolk or Sunny Side of the Street 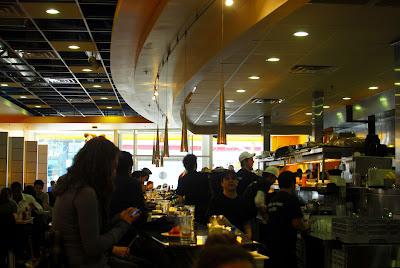 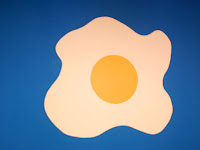 Upon entering Yolk, Our Party were greeted by quite a large crowd of people, awaiting tables.  The hostess informed them that the wait would be around 45 minutes, at which point Bunny became antsy.  “Don’t worry, dear,” said Benedict gently, “I’ve been on my knees, dusting with a tiny brush for last half a year.  I can’t tell you how good it is to be standing and walking for extended periods of time again.”  “UNDERSTANDABLE!” Bakewell bellowed with a flourish of his handkerchief.  But as if by magic, the crowd soon began to disappear into the restaurant one by one, and before Brandy could finish her first flask of whiskey (in other words, in 15 minutes), they were being taken to their seats.

A chipper young lad greeted them with menus and water, suggesting fresh glasses of juice for everyone at the table.  They all heartily agreed and began to examine the options on offer.  Bunny, naturally, zeroed in on the Benedict section of the carte du jour, both because she was barred from that option the previous week and because her darling Benedict was finally returned to her.  She selected the Pot Roast Benedict out of a plain desire to try such an odd version of her favorite.  Brandy preferred the Bacon Quesadilla.  Benedict opted for the Hey Ricky Omelet, a combo of avocado, jalapeño, and chorizo enfolded into eggy goodness.  Bakewell declared “CREPE COMBOOOOOO!” which apparently came with 2 crepes, 2 eggs, 2 sausages, and 2 strips of bacon.  Our Ladies also ordered a little something sweet for them all to share, the Peach Cobbler Crepes which, much to Brandy’s delight, came baked in Grand Marnier.

Bunny’s Benedict (the food, not the husband) was probably the most unique Benedict (the food, not the husband) she has had yet.  The eggs were a little over done and there wasn’t enough hollandaise, but the pot roast was tender and comforting.  The potatoes on the side were a tasty surprise; very well seasoned, and in a very good sort of way, inconstantly salty from piece to piece.

Benedict (the husband, not the food) found his omelet to be chock full of veggies and sausage.  The heat was present, to be sure, not over powering to the poor man’s senses, which had been dulled by the abundance of coffee he’d drunk during his time in the American Northwest.

Brandy’s Quesadilla was more of a burrito, coming in a tight roll instead of a flat crisp.  Having the back end of the wrap closed would have aided the eating of it greatly, as the contents tended to spill onto the plate with every bite.  Without the addition of the included sour cream and salsa, the dish would have been rather bland, but with them, it simply sang.

Speaking of singing, Bakewell’s crepes were a bit doughy, as well as his bacon a bit over done.  But the dish on the whole seemed to have pleased the man, who, as he dotted the corners of his mouth with his handkerchief, was rendered soundless for the first time all morning.

The Peach Cobbler Crepes, though delicious, did not present the kind of delicacy one usually likes to see in a crepe.  “Thin pancakes, more like,” Brandy mumbled.  “INDEED!” Bakewell intoned.  The crumble on the top did bring to mind the aforementioned summertime peachy confection, though the filing alone didn’t.

In the midst of the eating fray, the chipper waiter, having been touched by the sight of Bunny and Benedict holding hands under the table, brought the party a plate of some of his favorite dishes to sample.  Included were two types of French Toast: a banana bread and a lemon poppy seed, both of which were exceptionally moist, and also a Nutella filled crepe covered in strawberries and banana slices.  By that point, Our Party were so stuffed (Brandy found herself requesting a box for leftovers for the first time in living memory) that all they could manage was a bite of each.  After paying, Bakewell treated the crowd to an aria before they departed.
Yolk turned out to hold no disappointment for Our Ladies and guests.  At well under $20 a person, they walked away very much full and with enough leftovers for several meals.  It just goes to show, sometimes the crowd is right to be where it is.
The Short and Sweet Review: 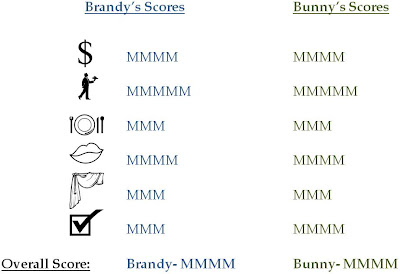