Big Jones or Brunch on the Bayou 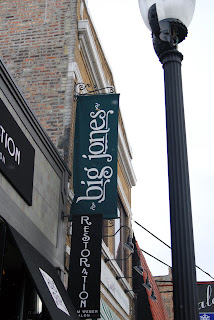 For Biscuit and Birdie Brown’s 50th anniversary, Bunny and Brandy decided they needed a taste of their homeland.  Luckily, a few whispers had reached them about Big Jones, a restaurant in the Andersonville neighborhood that served an upscale, yet comforting Southern style brunch.

Upon entering, one is greeted by grand red velvet curtains, which as Brandy pointed out were an ingenious yet lavish way of blocking the draft from the door on a cold winter’s morn.  The interior of Big Jones was stylish and elegant without being overly delicate or fussy.  Textured wallpaper, interesting lighting fixtures, and old fashioned hand painted wooden chairs make one feel as though they’re stepped into the parlor of a fashionable older relative.

To their surprise, there was no wait for a table.  Almost immediately upon sitting down, Our Ladies and the happy couple were treated to a plate of complimentary beignets.  Hot, crispy on the outside, fluffy on the inside, and covered in powdered sugar, they were the perfect beginning to the morning. 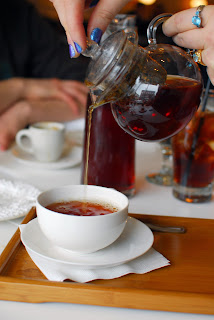 Before delving into the variety of food on offer at Big Jones, the tea selection is definitely worth mentioning.  Biscuit, on Birdie’s advice (he is an expert on tea, after all, having been stationed in both India and China during various wars) ordered the Jasmine Pearl tea, while Bunny selected the Himalayan Darjeeling.  Both came served on a tea set for one, complete with a self brewing tea pot, cup and saucer, and a tiny pot of honey.  Bunny’s eyes went a little misty after the first sip, saying her tea tasted like liquid home.  Brandy, on the other hand, ordered the Desert Pear Iced Tea, one of Big Jone’s many exotic sounding ice teas.  To her surprise, the waitress brought over a strange looking carafe and a glass of ice.  She explained that the flavored syrup was contained within the tiny glass topper and could be poured out according to the taster’s desire along with the tea.  Birdie soon regretted his choice of a tiny cup of espresso after seeing such wonders presented to the table. 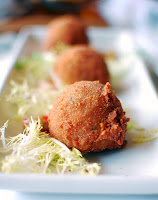 For starters, Birdie suggested (as he is an expert on Southern fair as well as a tea sommelier) the group order the Crawfish and Boudin Fritters as well as the Cheddar Biscuits, in honor of his dear one.  The fritters were crunchy and tangy, with just a hint of spice.  But the Biscuits (the food, not the southern belle) were the real standout.  Eaten plain, they were wonderfully dense and gooey, but when the honey butter and apple compote they came presented with were added, they became the things dreams are made of.  Well, Bunny and Brandy’s dreams, in any case. 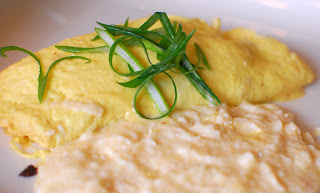 For the main event, Brandy selected the Mushroom and Leek Omelet with a side of Cheddar Grits.  The plating on this particular dish was rather disappointing, with only a few sliced leeks on top providing some color.  A simple slice of fruit or drizzle of sauce would have done wonders.  Regardless, the omelet was pretty straightforward.  The filling, which also included goat cheese, hadn’t been mixed together, meaning there were pockets of cheese, then leek, then mushrooms.  Brandy though mixing all of those things together would have been much more desirable.  As for the grits, they were creamy enough, but didn’t really taste of cheese. 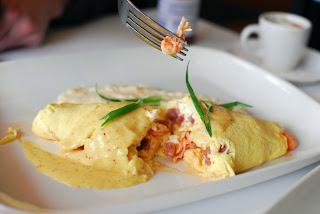 Birdie’s omelet was a tad more adventurous.  He had ordered the Bayou Teche Omelet, which held more crawfish plus cream cheese and house andouille sausage.  It imparted a certain smokey flavor as well as spice, making for excellent “recovery” food, as Birdie put it (Biscuit reported he’d been out late the previous night with some old war buddies, celebrating the 50th anniversary of his bachelor’s party). 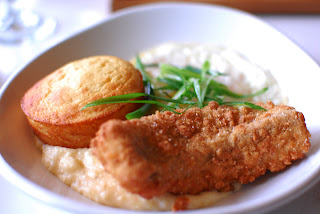 Biscuit squealed with delight when she saw catfish and grits on the menu.  Served with cornbread and two eggs fried eggs, this plate looked amazingly appetizing even to Brandy, isn’t much of a fish eater (“Which in England means I’m practically a vegetarian,” she pointed out).  Biscuit reported that the fish was cooked perfectly; flaky inside with no hint of fishy smell.  The cornbread was very rustic with chunks of corn hidden inside. 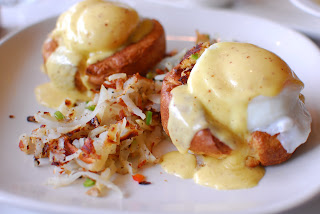 Bunny, ever the adventurous soul, ordered yet another Crab Cake Benedict, though she tried to denying it, saying that the dish had “Benedict” no where in the title.  Officially, she ordered Eggs New Orleans, which was a plate of poached eggs served over crab cakes and popovers and topped with hollandaise.  “It’s not a Benedict!” Bunny continued to protest to a table full of raised eyebrows.  Regardless of whether it was or wasn’t, Bunny did say that the eggs were well poached and the crab cakes were excellently spiced and fresh.  The surprise on the plate were the Potatoes O’Brien, which were nice and crispy, well seasoned, and an excellent compliment to the dish.

As it was a special occasion (and because Brandy was grumpy about her under plated and simplistic omelet) the group decided to order desserts.  First, the Moon Pie, made of peanut butter fluff and crispy cookie, covered in chocolate and served with banana ice cream.  There was a surprising smokiness present on first bite, which the group discovered was due to the addition of bacon.  The second dessert was the Boca Negra cake, a rich chocolate torte served with freeze-dried rice and raspberries, as well as “benne” ice cream and a cherry gelee.  This one was very rich, with safe flavors countered by unusual textures from the torte’s accessories.

The whispers were definitely correct when it came to Big Jones.  So many surprises should surely have cost a fortune, but each of Our Ladies made it out of the restaurant spending less than $30 (keep in mind, that included tea, 2 appetizers, a main course, and a dessert).  This is a place to sit back and enjoy on a lazy weekend morning if there ever was one, and so authentically Southern that Biscuit and Birdie’s accents definitely seemed a lot stronger upon exiting the establishment.
The Short and Sweet Review: 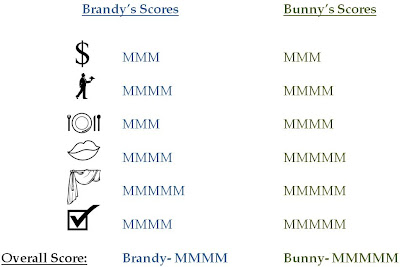 Posted by Bunny and Brandy at 7:19 PM