Postcards from Bunny: Shine & Dine and Cuisine for Cancer 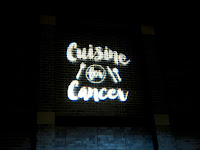 There's a few things that will pull Bunny away from her adventures abroad to come back home to Chicago, and second on that list (after a good plate of Eggs Benedict) is getting to champion a worthy cause with an amazing evening of food, drink, and fun.  Recently, Bunny had the privilege of attending two such events: the inaugural Cuisine for Cancer night, hosted by foodie extraordinaire Steven Lee and Imerman Angels, and for the second year in a row, the Shine & Dine night hosted by Step Up Woman's Network. 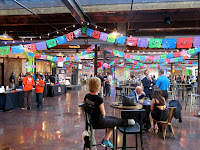 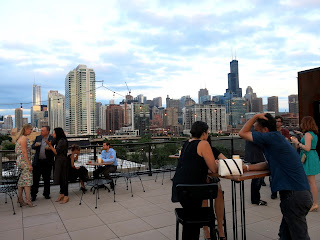 First up was the first ever Cuisine for Cancer event, a night of food and frivolity in which chefs from over 20 restaurants in partnership with 10 cancer charities prepared Latin fusion themed dishes and competed for prizes from the crowd and also from a panel of distinguished judges.  The event was held at the absolutely stunning Morgan Manufacturing industrial space, which featured a sunken dance floor, a fiesta inspired main floor, and awe inspiring views from the rooftop, where Liquor Lab was hosting an exclusive experience, complete with specialty cocktails. 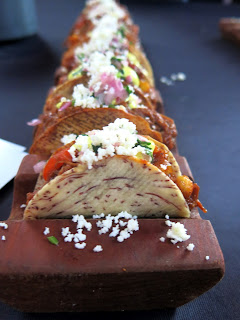 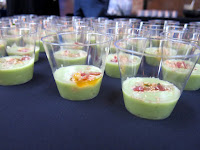 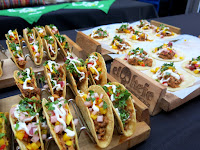 Bunny noted quite a few of her and Brandy's favorite spots among the crowds that night, like Public House, Bull & Bear, and Carnivale.  Making her way around the floor and trying the various tacos, gazpachos, and such on offer, Bunny quickly zeroed in on a few stand out dishes.  Carriage House brought a green gazpacho with pickled pink shrimp, watermelon, and charred corn which was vibrant and refreshing, while The Bedford had a zingy and heat packed chicken thigh tostada with pineapple and marinated summer vegetables and Warm Belly Bakery served up spicey and rich Mexican chocolate cookies.  The winner of the crowd favorite came from Dinner Lab with their over stuffed shrimp tacos containing beer battered shrimps, jicama slaw, and ancho chili aioli, while the judges' favorite was a smokey short rib taco from Q Barbecue, and Bunny quite approved of both choices.  The winning restaurants won a large portion of the profits from the event's ticket sales to donate to their associated charities, while the other charities evenly split the rest of the profits.  "Oh, I do hope they do this again next year!" Bunny sighed as she sipped her cocktail and munched on a black rice fritter from Jellyfish, "If there's one thing I love more than good food, its a good deed." 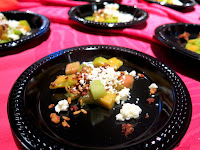 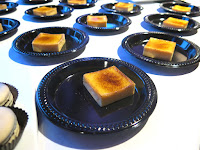 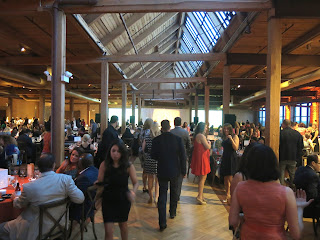 A few days later, Bunny was once again whisked into another vibrant evening of food, this time for Step Up Women's Network 5th annual Shine & Dine.  Held at the gorgeous Bridgeport Arts Center Skyline Loft, this year's event honored Allstate Insurance Company’s Vice President and Assistant Treasurer Stephanie Neely and Step Up alumna Paris Scales. Step Up propels girls from under-resourced communities to fulfill their potential by empowering them to become confident, college-bound, career-focused and ready to join the next generation of professional women, and events throughout the year like Shine and Dine help to bring supportive funds to the organization not only through ticket sales, but also through a rather extravagant silent auction.  All in all, this year's evening raised over $250,000 for Step Up's after school programs. 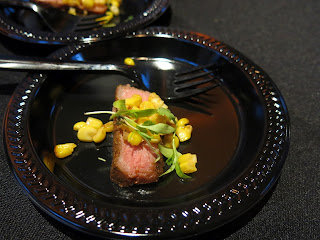 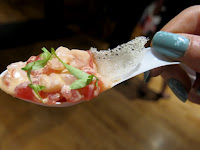 The food at this year's event was just as good, if not better, than last year.  Bunny delighted in dishes like the smoked prime striploin with corn, cilantro, and pickled onion from Michael Jordan's Steakhouse, hamachi and tuna tartar from Signature Room, and the heirloom melon salad with sheep's milk feta and pecans from Found.  Troquet caused quite a stir with people lining up to try their Angus beef sliders with camenbert, bacon, and truffle aioli, but Bunny's eye was drawn to a variety of delectable desserts, like a passion fruit creme brulee tart from Vanille, some key lime bites from Bang Bang Pie Shop, and a succulent berry gelato from Spiaggia.

"With such amazing food around, its hard to imagine anything more perfect," Bunny sighed, "But the fact that all of this was done in the name of such a noble organization makes everything taste that much sweeter."

Make sure to check out Bunny and Brandy's Facebook page for loads more photos from both events!

The writers of this blog were admitted to these events free of charge as members of the media in order to facilitate the writing o this post.
Posted by Bunny and Brandy at 10:50 AM