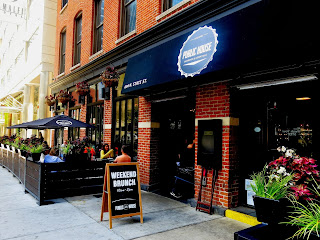 Though she has lived in Chicago for many years now, Brandy has never really understood all the excitement that usually accompanies the start of football season.  "Its just transitioning from one silly game to another.  I really don't see what all the bother is about," she often complains when she sees jersey wearing patrons crowding into bars across the city, "In England, we only get this excited about a sport when a referee makes a bad call or a star athlete marries a pop singer."

In order to educate herself a little more on the subject, Brandy enlisted the help of her friend Bailey Blue.  "You're a Midwestern girl, so you must know all about American football," Brandy said to her, "So explain to me why its called football when the players mostly use their hands?"  "Explaining the rules of football would be much easier while watching an actual game.  Why don't we find a nice bar or gastro pub to have brunch at and you can see and feel the excitement for yourself?" Bailey suggested.  Never one to turn down an invitation to brunch, Brandy agreed, and it was decided that Public House in River North was to be the destination. 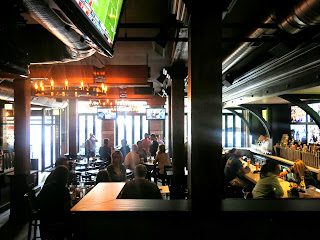 Public House was surprisingly vast and wide, with bar seating in either direction and a more private, elevated area to the back.  Though fairly dark inside, the room was lit up by several interesting displays, such a wall of green glass bottles and a digital aquarium that really seemed to confuse Brandy.  "Is that what we're eating?" she whispered to Bailey, "Because I'm not in the mood for seafood this morning." 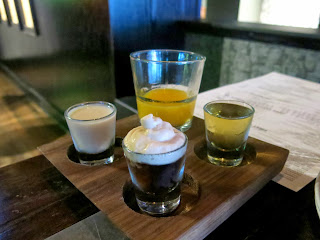 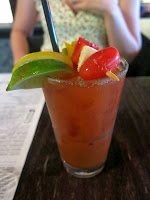 First up were the cocktails, with Bailey going for a traditional Bloody Mary (to which she could have added something called a "Loaded Skewer" which would have made ordering a meal unnecessary as it contained things like a chicken wing, bacon, shrimp, and several kinds of cheese and vegetation).  Bailey felt the mix was a little thinner than she was used to, but provided a great kick of spice that really helped to wake one up.  Brandy went with a wondrous flight of cocktails entitled "The Breakfast Trio," consisting of the the Cinnamon Toast Crunch (horchata flavored rum and whiskey), The Pick Me Up (vanilla vodka, coffee liqueur, and espresso form), and The Pancake Stack (butterscotch liqueur and whiskey with an orange juice chaser).  Brandy simply adored this little collection of shots, from the warming Cinnamon Toast Crunch to the powerful Pick Me Up and the syrupy sweet Pancake Stack, whose fresh orange juice chaser was even a welcome fourth wheel. 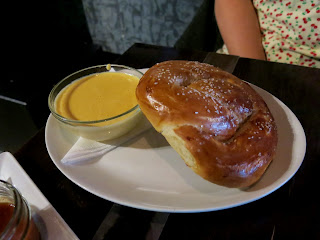 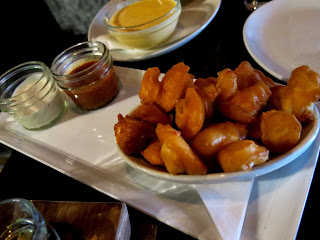 After advising Brandy on the proper kinds of food to be consumed while watching football ("Stick to anything with beer, cheese, or meat in it," Bailey told her), the two ladies started off with some Fried Cheese Curds and a House Made Pretzel.  The cheese curds were devilishly scrumptious, being coated in a light, almost tempura like batter and came with a tangy eggplant caponata and a creamy parmesan peppercorn dipping sauce.  Though dipping the crunchy, gooey bits of fried cheese into even more cheese seemed somehow cannibalistic to Brandy, she decided it was all in the spirit of the event.  The pretzel was warm, incredibly soft, and came with a cup of "beer cheese" made from 3-year aged cheddar for dipping that Bailey said she could probably drink a glass of. 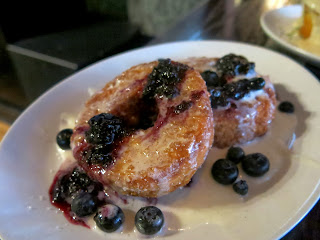 Next, the pair split an order of Donut Fried French Toast, a dish so impossible sounding it had to be tried.  The donuts, which were crisp on the outside and incredibly tender on the inside, had been coated in cinnamon sugar, drizzled with creme anglais, and topped with blueberry and blackberry jam that provided a nice tart contrast to the otherwise very sweet dish.  "Normally they make me take copious notes on my meals," Brandy said slowly, "But in this case, I think the picture will do more justice to this dish than my words ever will." 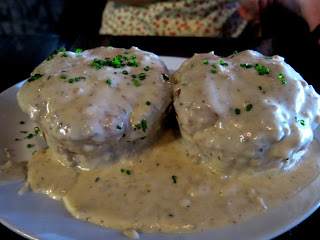 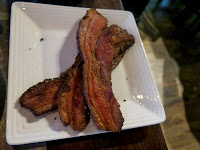 For her entree, Bailey went for the carb heavy Biscuits and Gravy and a side of thick cut peppered bacon.  The biscuits looked more like two cakes smothered in a creamy, white gravy and though massive, were light and fluffy on the inside with a nice crunchy top.  But for Bailey, they really only served as a vehicle for the delectable gravy.  Smooth and creamy without the obtrusive amount of sausage flavor that most other cream gravies seem to have (this gravy's base was made from Big Fork bacon sausage, which gave it more of a smokiness and less of a spiced flavor), Bailey couldn't help closing her eyes and grinning as she savored every bite.  Even the bacon was well above average, coming in such thick slabs that Bailey jokingly referred to them as "Strips of bark off a bacon tree." 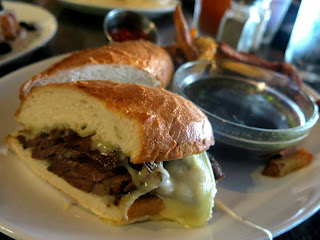 Brandy decided on the Smoked Kobe Beef Brisket Dip, a twist on the classic French dip with caramelized onions, gruyere cheese, a jus flavored with stout.  The beef was amazingly tender, almost melting on the tongue, while the onions added a nice sweetness that counteracted perfectly with the salty, deeply flavor jus.  Even the fries on the side, which had been hand cut and covered in a dry rub seasoning, seemed classic, yet original. 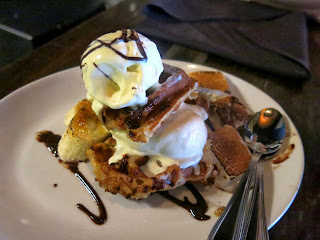 Though ready for a nap as they were, Bailey and Brandy just couldn't resist sampling one of the desserts, and so indulged in the Bananas and Waffles, a spectacular sundae comprised of banana beer gelato, chocolate covered pretzels, housemade marshmallows, bruleed banana slices, and a caramelized waffle.  Sweet, smokey, gooey, crunchy, and slightly salty, there could have been no other choice of a dessert more fitting for a day of football.

All told with drinks, 2 appetizers, three entrees, and a dessert between them, the total bill was about $50 a person, which by any standard is a pretty fair price to pay for such a bounty of game time goodies.  Brandy may have entered into Public House with a skeptical frame of mind in regards to American football culture, but after such a flavorful, hearty, and fun breakfast in an equally buzzing, joyous, and fun atmosphere, she found herself a little more willing to sit through the ups and the downs of a game.  "Now, which team are we rooting for then?" she asked Bailey as they waddled outside, "I know the Greenbay Packers have something to do with cheese.  Do they give it out for free?  If so, I shall be rooting for them."  Bailey quickly corrected this mistake.

*The writers of this blog were invited by the restaurant to sample food free of charge in return for an honest review. 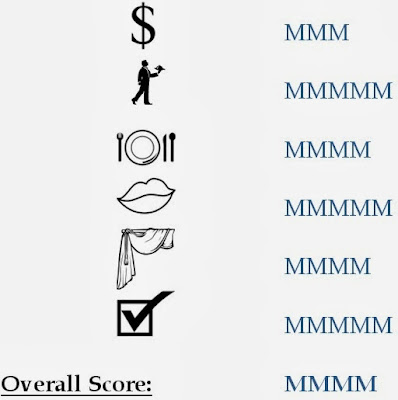