Jellyfish or Tuna on Trend for Fall 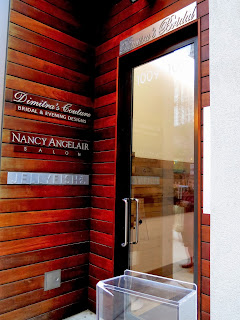 As all of you might have seen, last week our dear Bunny returned to Chicago, if only briefly, to take a trip through the Field Museum's new exhibit on the World's Fair of 1893.  Her vivid descriptions of the exhibit and its treasures showcasing exotic cultures from around the world got Brandy thinking.  "Perhaps I should change up my brunch routine," she pondered, "As many creative Benedicts, French toasts, and bacon cocktails as there are out there, I wonder if there isn't something I'm missing.  Something more exotic.  And fashionable.  Something that has its own national holiday." 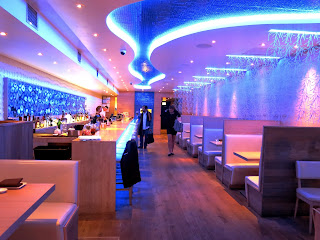 Luckily for Brandy, last weekend just happened to have been the start of National Sushi Day, and having remembered liking a delicious sample of sushi at the Chicago Gourmet Festival, Brandy settled on Jellyfish, an ultra hip, trendy, and still fairly new spot at the head of the Gold Coast.  Arriving at an inconspicuous door at street level, Brandy was greeted by a friendly host who escorted her to an elevator inside.  "Do you work in the neighborhood?" he asked her, smiling.  Brandy studied the young man, who looked to be covered in designer labels, then looked at her own homemade shawl, street worn shoes, and threadbare carpet bag clutch and realized how out of place she must have looked.  "No, deary," she said, "Just celebrating the holiday." 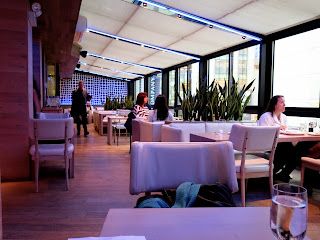 Once upstairs, Brandy found a truly beautiful space with clean white booths, swirling blue lights, a majestic bar, and beautiful views of the street below.  She was taken to a table straight away and handed a few menus, one of which boasted some of the "special" rolls on offer for only $5 each in honor of National Sushi Day (though she was a little disappointed to see that only one roll per person was available at the special price).  It wasn't long before Brandy realized how in over her head she was (though Brandy is a great lover of sushi, she doesn't usually brunch on it) with the myriad of choices available.  "Well, there's only one thing for it," she proclaimed, "I'm going to treat this brunch like any other brunch and combine my sweet and savory." 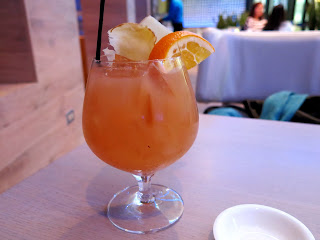 To start off, she ordered a Mandarin Mule, which added a little orange, fresh ginger, and cinnamon to the traditional mix of vodka, ginger beer, and lime.  Brandy found it delightfully bright, sweet, and zingy with both the orange and lime coming through.  The cocktail was also garnished beautifully with slices of citrus and ginger, though Brandy wished, for old time's sake, that it had been served in a copper cup. 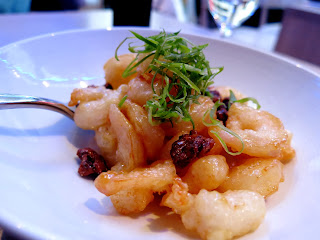 Next, Brandy ordered some of the Honey Walnut Popcorn Shrimp.  The shrimps had a lovely light crispness to them from the tempura batter and weren't overly sweet at all, despite the honey glaze.  In fact, the real sweetness came from the tiny pieces of candied walnuts scattered throughout the dish, which were well balanced by the sliced scallions that garnished the top. 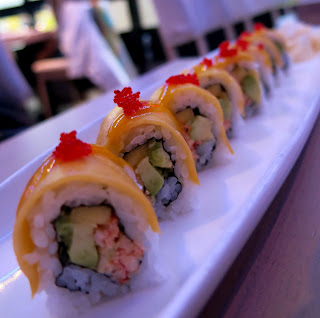 Brandy then picked the Lobster and Mango roll from the specials list.  The dish was presented beautifully with the succulent lobster peeking out from the center of the roll along with some avocado,  then topped by slices of bright mango and a little sprinkle of flying fish roe on top.  Though the flavors went very well together with the sweetness of the mango being the most predominant note, Brandy longed for an element of texture to this roll, as the lobster, avocado, and mango melted similarly on the tongue.  "But I do appreciate the little salty hit from the fish eggs," she mused, "If it wasn't for that, I think I'd be quite bored by this."

To finish, Brandy chose the Sweet P roll from the regular menu, which boasted a filling of sweet potato, cream cheese, and avocado topped off with spinach tempura and a sweet soy sauce.  This roll really delivered the texture Brandy was craving in the first one with just a little elegant crunch from the tempura flakes and a smooth, uniform interior.  "I would think vegetarians would be excited for this roll, as its a sort of unusual combination," Brandy pondered.

For her lunch of a cocktail, appetizer and two rolls (one of which was on special, mind you), Brandy's total came out to nearly $60 after tip, which she thought was pretty darn pricey ("My goodness, its lucky I don't have room for dessert!" she exclaimed when she saw the bill).  Luckily, the presentation and attention to detail had been spot on, and the wait staff extremely friendly and helpful (Brandy had marveled at the fashionableness of her server's choice of dress until she noticed several other young ladies wearing the same cobalt blue, pencil skirted garment.  "Oh, its their uniform!" she exclaimed, "For a moment I thought I was in one of those Robert Palmer videos.").  So although Brandy doesn't often brunch on sushi, she was glad to have gone outside of her box a little.  She was also glad to see that the laws of sweet and savory, by which she governs her life, can be applied to all types of cuisine. 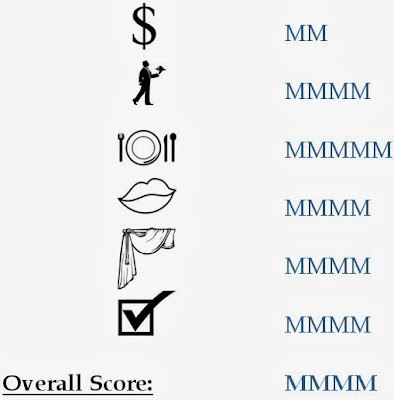