Bull and Bear or Where the Styled Things Are 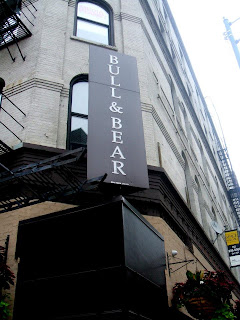 There is something to be said for having connections in this world of ours.  Knowing somebody can get you anything from a deal on a stationary set to a brand new career and at one time or another, every one of us has been known to pull a string or two.  But if you are the person who is usually the one with all the VIP credentials, it can come as quite a shock when all of the sudden, you are totally reliant upon another's clout. 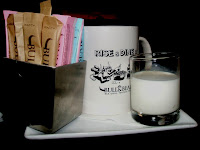 Such was the case with Brandy's brunch companion this week.  A few of you may remember Brandy's dear friend Babka, the world famous Polish supermodel.  Even fewer of you may know that Babka's darling sister, Baranina, is also rather famous in her own right, being Poland's most recognized non-polka playing musician.  In fact, Baranina is so well known that she decided to take a little vacation to Chicago, where she was hoping to go unrecognized and undisturbed by the public.  Babka did a little string pulling of her own and called Brandy to see if she could look after her darling Baranina. 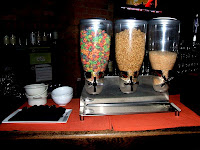 So Brandy and Baranina met at the chic yet sporty bar and grill known as Bull and Bear in River North.  Brandy had actually been invited to Bull and Bear as their guest, and as such thought it an excellent opportunity to give this lovely starlette a real treat.  "How intellectual," Baranina remarked as they entered the establishment, "This restaurant has been named for the emblems of the stock market, there by reflecting America's simultaneous capitalistic worship and economic troubles, yes?"  Brandy starred at the young and rather brightly colored lady (her clothing was several shades of neon, as was her hair) for a moment.  "I think its named for sports teams," she said rather blankly.  Baranina nodded thoughtfully 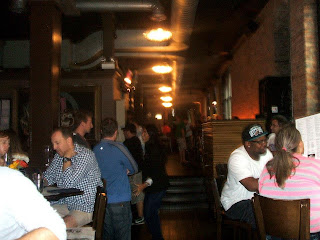 The interior of Bull and Bear was roomy and comfortable, with an energetic vibe, but without being too loud.  Sweet little touches like the ceramic milk carton flower vases mixed with the wine glass shaped light fixtures lent the place an air of sophistication, even with the abundance of televisions screens showing every kind of game and sport imaginable.  The ladies were taken to a large booth by a sunny window.  Brandy noted that a lot of the bigger booths had beer taps built right into the table tops.  "Ingenious," she marveled as they passed.  Brandy also noted that unlike a lot of places on weekend mornings, the staff at Bar and Bull all magically seemed in a good mood, having genuine smiles on their faces. 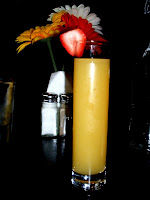 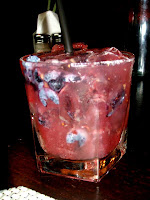 Starting with some libations, Brandy ordered the Blue Malibu, a mix of blueberries and coconut rum, while Baranina stated quite plainly, "I want the typical American brunch experience."  "She'll have a mimosa," Brandy told the grinning waitress.  Brandy instantly fell in love with her cocktail, which had the freshness of real blueberries while still being fun and fruity.  She downed the thing so quickly that a second cocktail was ordered straight away, this time a concoction called Life's a Peach which turned out to be a peach flavored mint julep.  Brandy also adored this one too for its freshness and, as she put it, "The splash of whiskey that every morning needs."  Baranina's mimosa was rather run of the mill, but presented nicely.  So desperate for the "Typical American brunch experience" was Baranina that she proceeded to order a Bloody Mary as well.  Again, a fairly safe version of the old favorite, but this time coming with a surprise accompaniment.  "The Bloody Mary gives you access to the cereal bar," the waitress told her, pointing towards several dispensers, milk, and bowls, which had been set up on the back bar.  Baranina's eyes positively lit up when she laid eyes on the Fruit Loops while Brandy merely downed her second cocktail and buried her head in her hands from embarrassment. 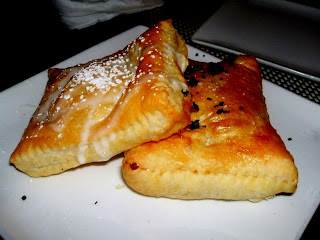 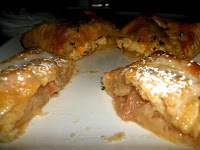 Executive Chef David Blonsky was kind enough to visit the table and introduce himself, personally walking the ladies through the menu.  "We do just a few things, but we do them well," he emphasized.  After his irresistible description, Brandy took the lead by ordering the house made Pop Tarts to start.  These little beauties serve as a playground for Chef Blonsky, who dishes out both sweet and savory flavors that change every week according to his whim.  This particular day the pastries came in Vanilla Pear and Bacon, Egg, and Cheese.  In no way resembling their corn syrup soaked name sakes, these pop tarts were made from a flaky and buttery puff pastry.  The sweet variety tasted like the most divine little pie without being too sweet.  The savory one had perfectly clean flavors without being watery or greasy.  Brandy marveled that even the crust has not been touched by any excess moisture. 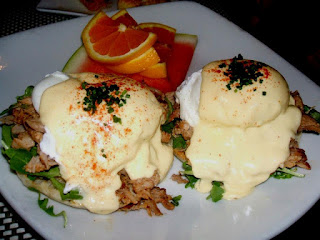 Going along with Brandy's suggestions for a typical American brunch ("I just want to feel like one of the ordinary people," Baranina insisted as she put on a pair of diamond encrusted sunglasses and hid behind a magazine with her picture on the front of it) Baranina ordered some Eggs Benedict.  Once again, Chef Blonsky had left himself a way to play with an old favorite by placing among his delectable Benedict concoctions (classic, shortrib, and crab cake) the Seasonal Benedict, which he changes to match the ingredients available.  The flavor this day was braised pork shoulder with tomato and arugula and a tarragon hollendais.  Baranina simply adored the dish, wondering at the perfectly executed poached eggs, the peppery greens, and especially the tender melt-in-your-mouth pork.  "American brunch is so decedent!" she exclaimed.  Brandy simply smiled at her enjoyment. 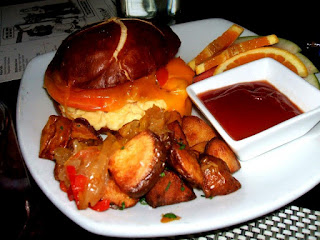 Brandy had ordered a lovely breakfast sandwich entitled the Day Trader, a combination of eggs, bacon, tomato, and cheddar cheese on a soft pretzel bun.  Although she prefers her eggs over medium, Brandy ordered them scrambled, having learned her lesson on several occasions about the messiness of runny yolks on a sandwich.  Brandy was especially pleased to see the addition of the tomato, as so many breakfast sandwiches tend to be in desperate need of vegetation to break up their protein rich fillings.  She also tipped her hat (it was a lovely vintage cloche from Paris) to Chef Blonsky for putting a few slices of beautiful fruit on the plate.  "I've said time and time again, a touch of fruit to cleanse the palate does such wonders for the meal!" she was heard to remark.  The potatoes on the side were also rather lovely, having a nice crispy exterior, but soft insides, and tasting of caramelized onions, bell pepper, and just a hint of truffle oil. 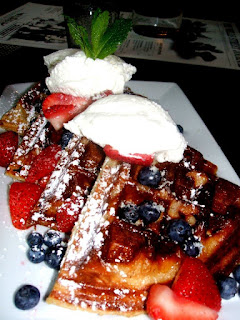 As a further treat, the ladies were brought a plate of Bull and Bear's signature Belgian Waffles, topped with fresh whipped cream and berries.  Though the whipped cream (which had a hint of mint flavor to it) and berries were a nice refreshing end to the meal, the waffles, sadly, were a bit of a disappointment.  Though very flavorful to the point of tasting like caramel candies, the texture was a bit too hard, making it a little difficult to even cut through them.

So impressed with everything from the service to the food was Baranina that she informed Brandy she wanted to give these "typical Americans" an impromptu concert, but Brandy managed to talk her out of it, telling her to, "Just let the poor people watch their football games, dear."  "You must be quite the celebrity to get treatment like this.  Such special food and such nice people," Baranina said to Brandy.  Brandy smiled and said, "Well, dear, I should hope they treat everyone just the same.  But yes.  I am quite the celebrity here."  Baranina was rather glad to have made such a well connected friend. 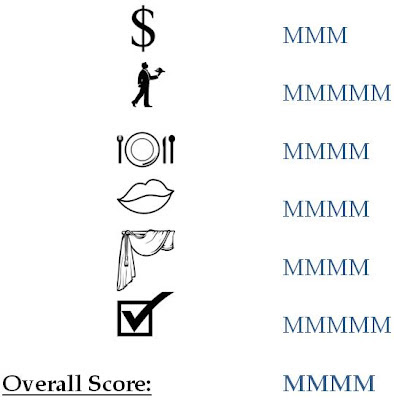 * The writers of this blog were invited by this restaurant and provided with a free meal in exchange for a review.  The opinions of the writers' have not been influenced by this transaction.
Posted by Bunny and Brandy at 10:22 AM