Carnivale or Everything's Brighter in the Morning 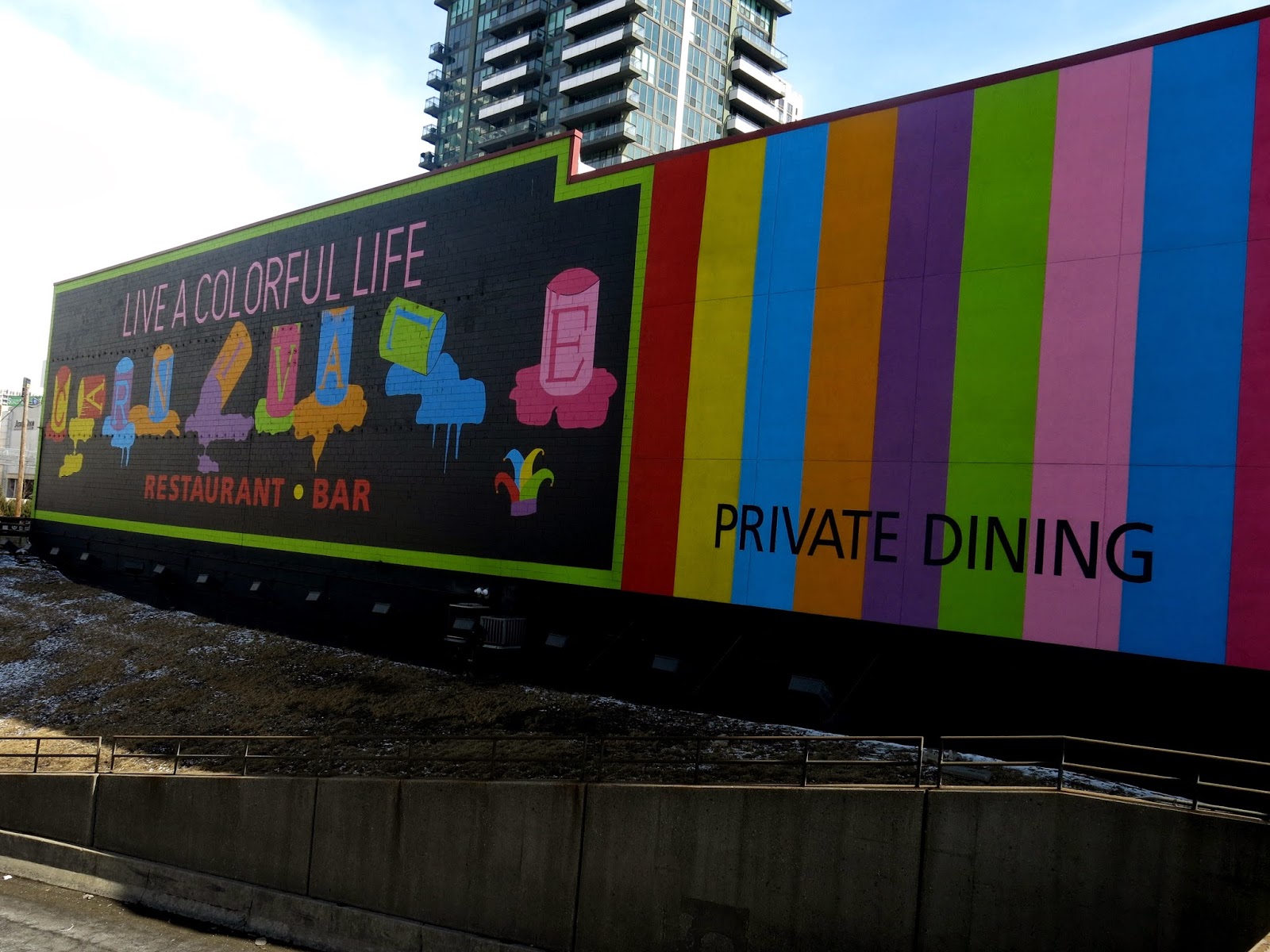 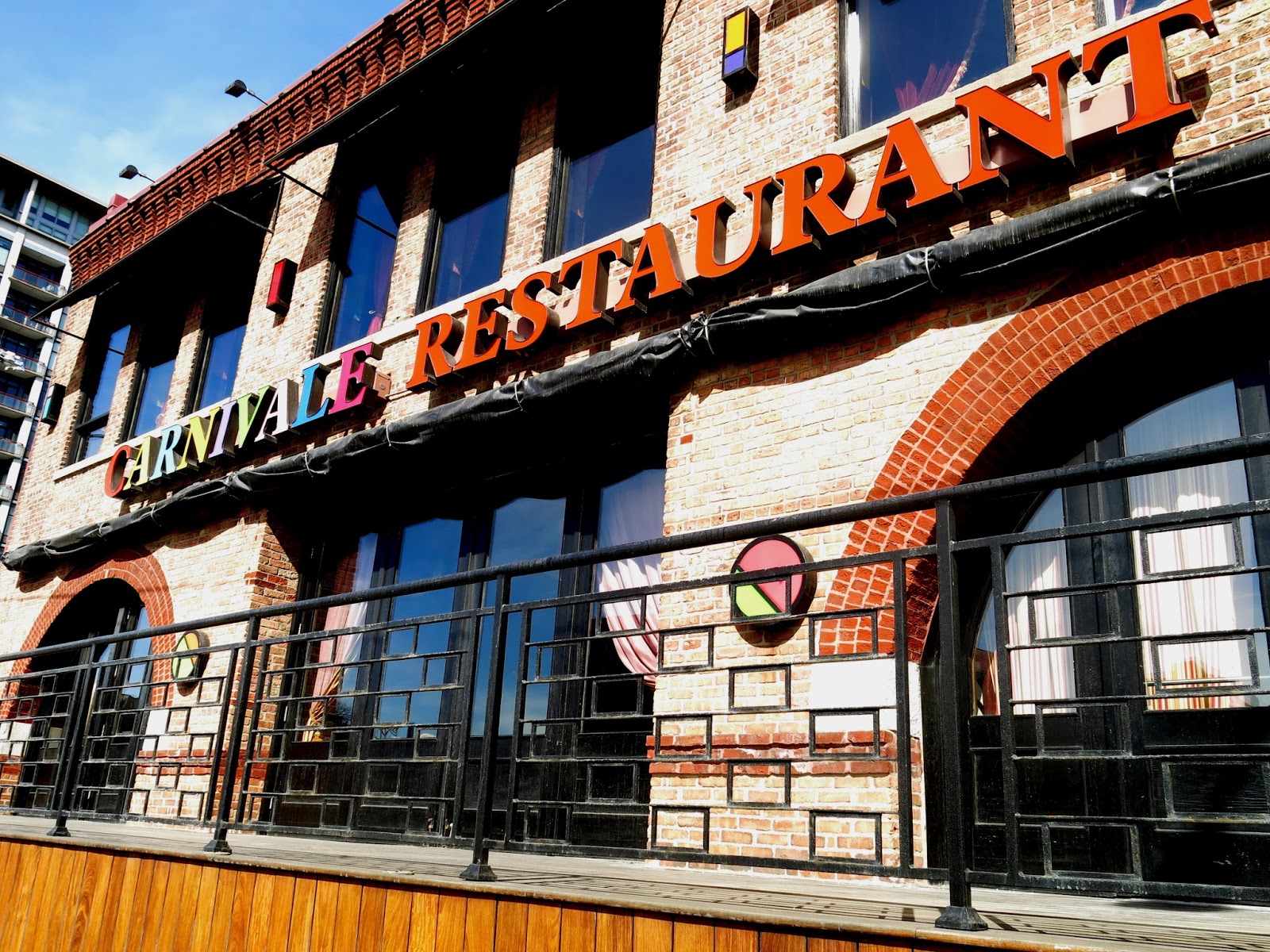 When in the midst of all the melting snow and slush that covers Chicago in the late winter, it's hard to remember that there was ever color in the world.  The lifeless trees, the grey sky, and the grimy ice piles all along the sidewalks are enough to make most people believe they've only ever seen the redness of a rose of the greeness of grass in a movie.  Such was the problem for one of Brandy's dear friends, Baron Von Blackfisk, who had been keeping himself locked up in his vast mansion ever since December.  "The world is bleak and pointless," he said to Brandy in a coded letter, "I have no desire to ever leave the sacred space of my library ever again.  I'll just spend the rest of my days here, waiting to expire..."  "Nonsense!" Brandy exclaimed upon reading the letter, "What he needs is a little dose of color and light!  I know, I'll take him to that garish place in the West Loop, the one with the eye catching sign on its side... what was it now.  Ah yes!  Carnivale!  Why the very word makes me want to dance on a beach!"  And so she showed up at The Baron's doorstep one morning, saying, "Put on your most colorful outfit.  We're going to brunch."  (The Baron's most colorful outfit, it turned out, consisted of a dark grey suit and a floor length cape with a blood red lining.) 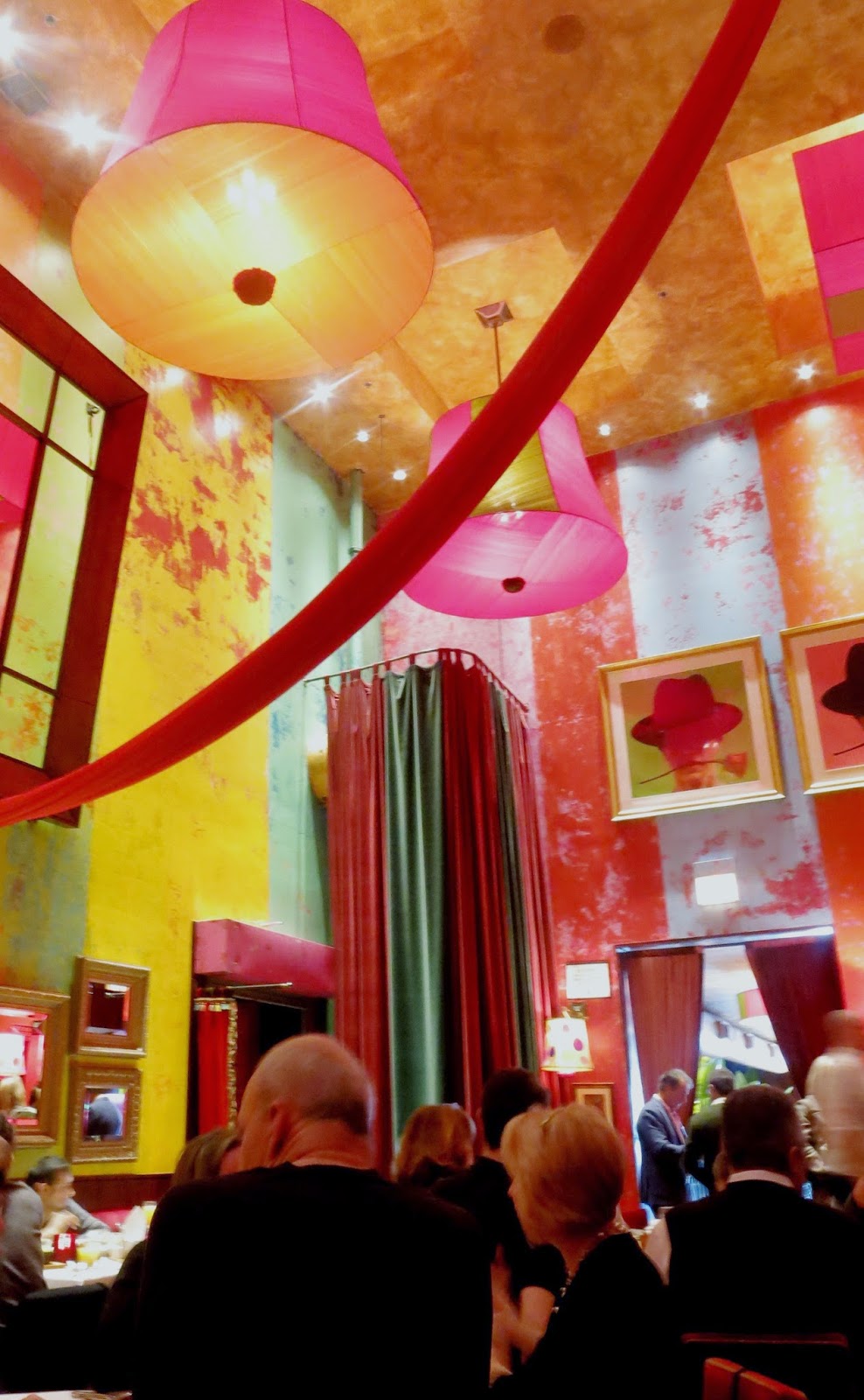 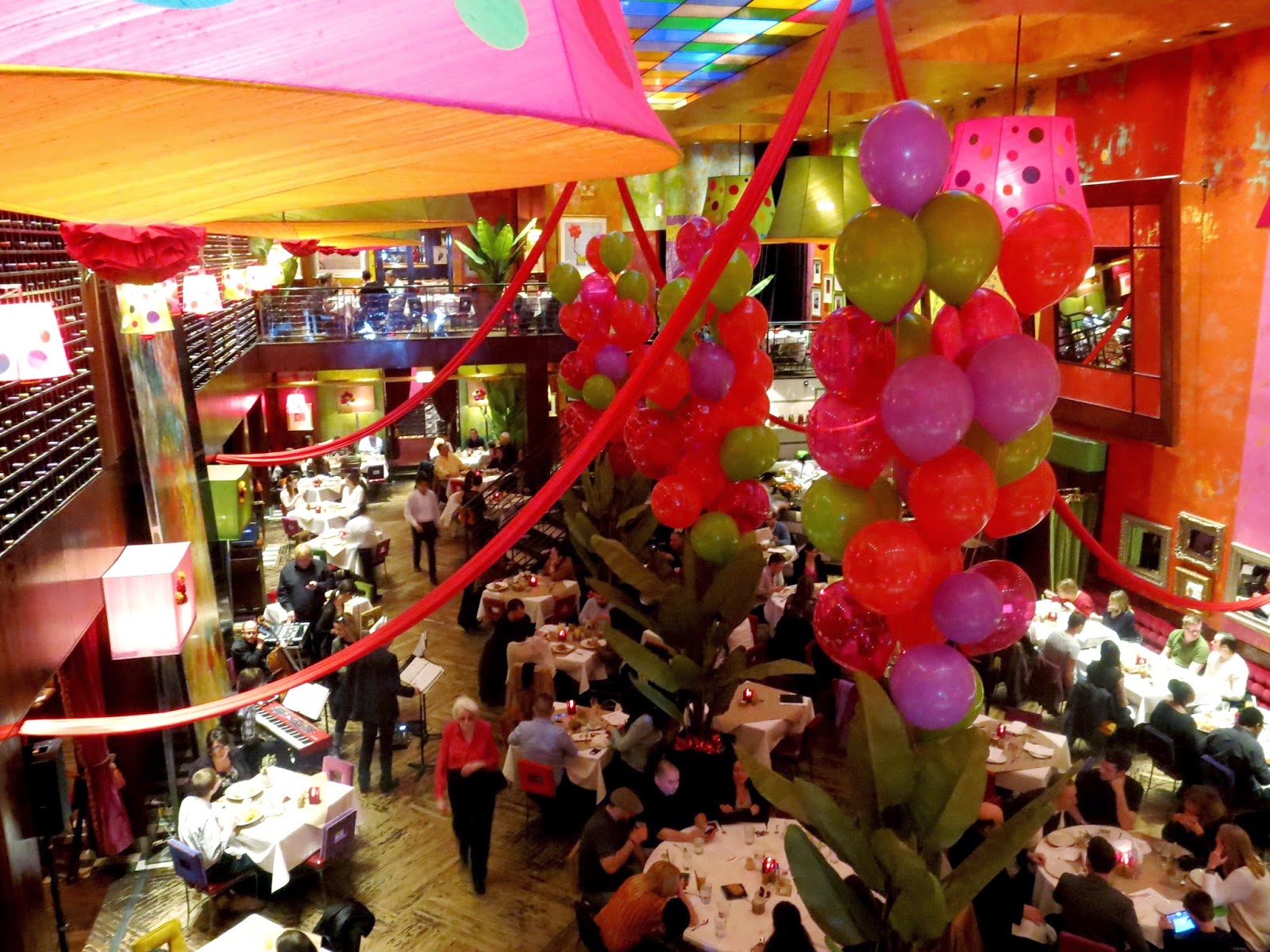 The inside of Carnivale is like no other restaurant in Chicago.  After being lead through a curtained lounge area with a wall sized display of all the 200+ tequilas the restaurant has in stock, diners are welcomed into a very large rectangular dining room, which according to Brandy, "Would bring a smile to the face of the most unhappy man in the world."  The establishment's moto of "Live the Colorful Life" is so perfectly expressed here: everywhere are bright, vibrant exclamations of color, like the towering palm trees, the swooping fabrics, the changing lights behind the enormous wine displays, the stained glass sunlight inlaid in the ceiling, and even the waitstaff, clad in beads, wigs, and other pigmented frivolities.  The vastness of the place was helped along by the towering height of the ceiling, which looked to be at least half a mile over their heads.  "I usually prefer somewhere a little more dark and dank for my meals," said the Baron, "But I suppose I can make an exception just this once." 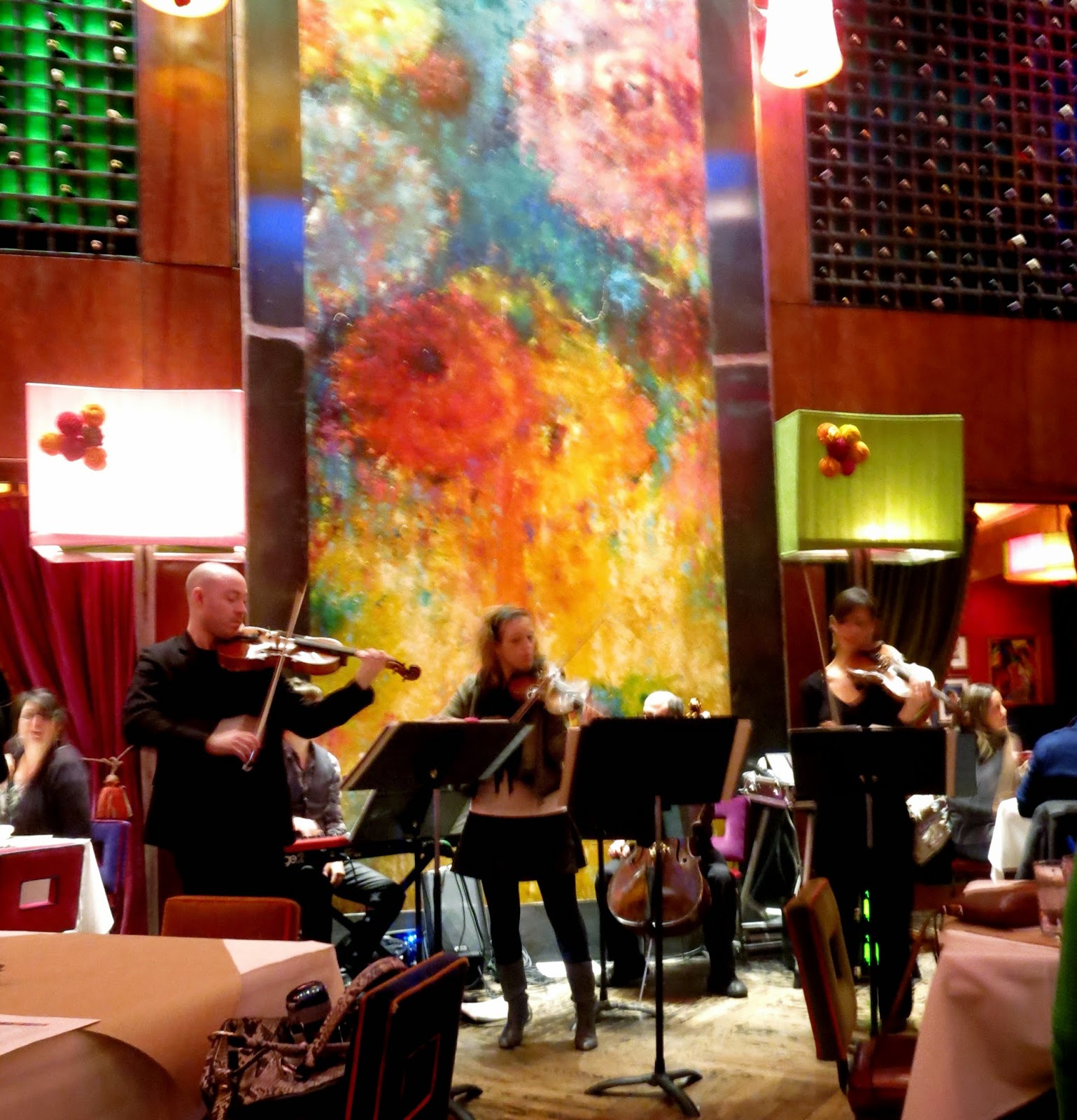 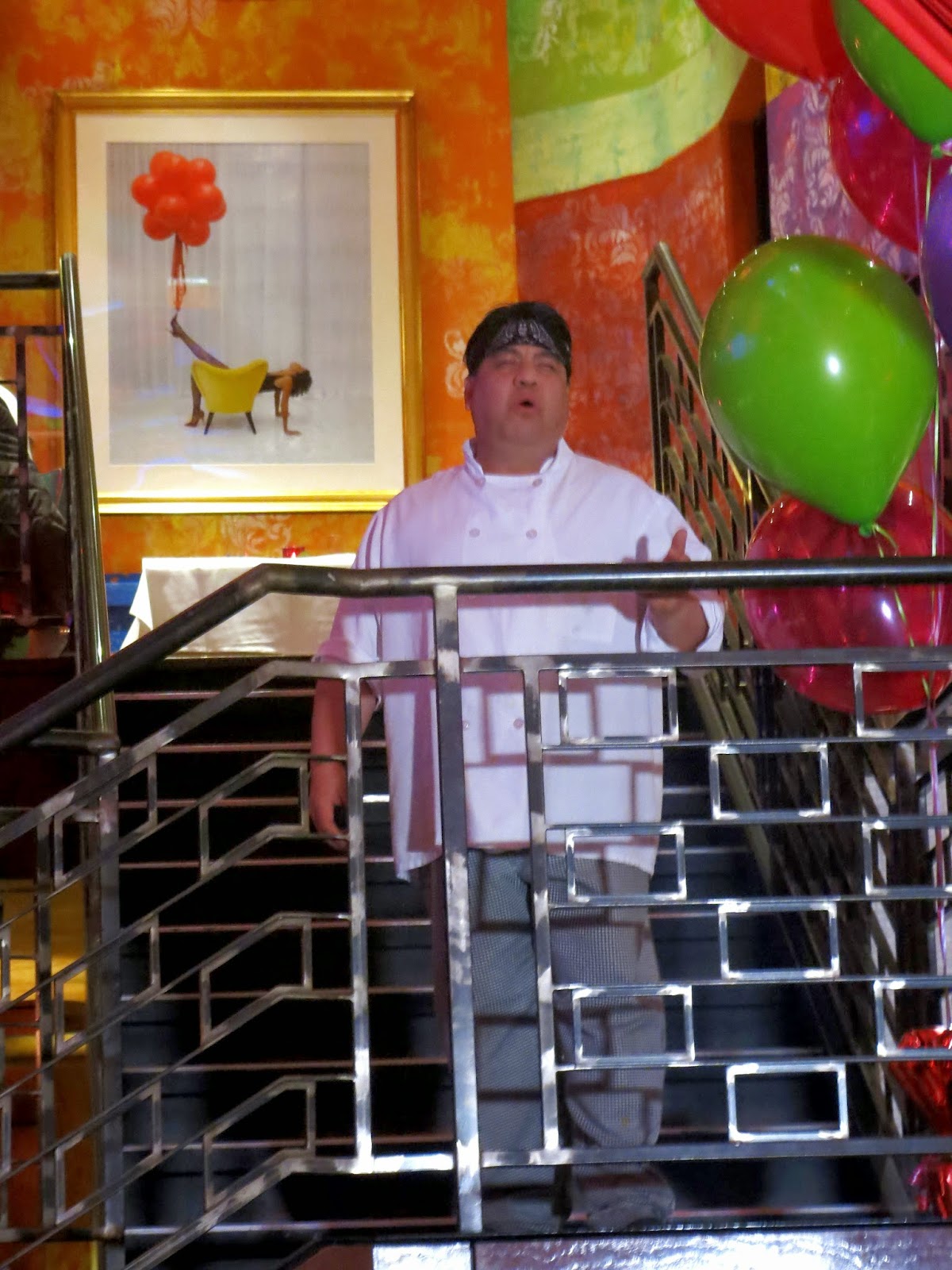 Immediately after taking their seats, a glorious booming voice was heard over the dining room.  The music, it seemed, was coming from a man clad in chef's whites who stood at the back of the room on a balcony of sorts, singing an aria a capella to the brunchers, who all erupted in applause at the end of his song.  Soon after that, a string quartet appeared out of no where to perform some light classical music mixed with pop songs.  "This place is like Disneyland," Brandy said in wonder, "I can't wait to see what pops out of the next door!" 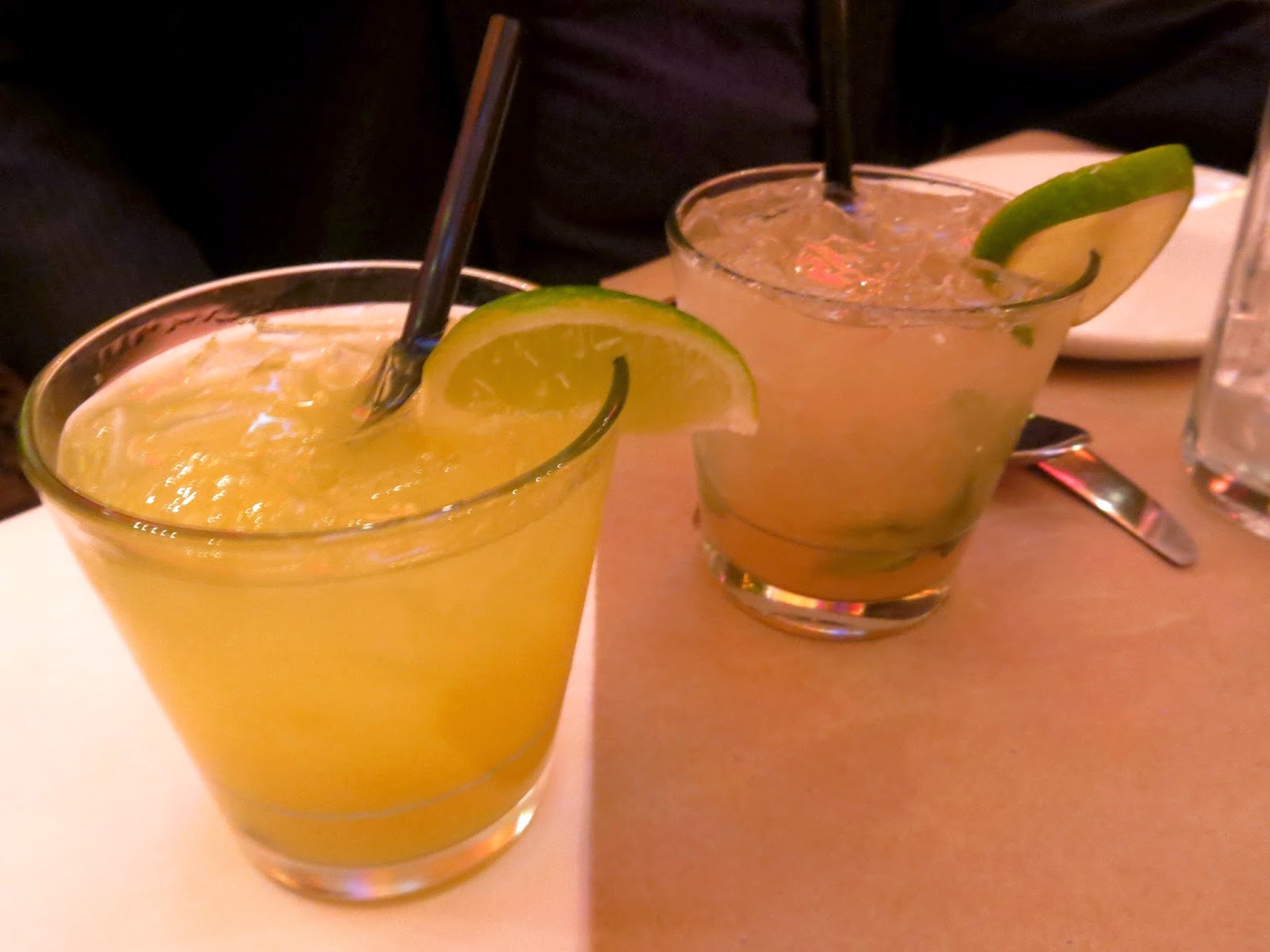 Brandy and The Baron began with a couple of drinks; for Brandy a Screwdriver spiked with pomegranate juice, and for The Baron, a concoction known only as The Paloma.  Brandy missed the pomegranate kick from her screwdriver, which was otherwise pretty typical, but very fresh tasting.  The Baron's Paloma packed quite a powerful tequila punch with a salty and sweet note, much like a Margarita. 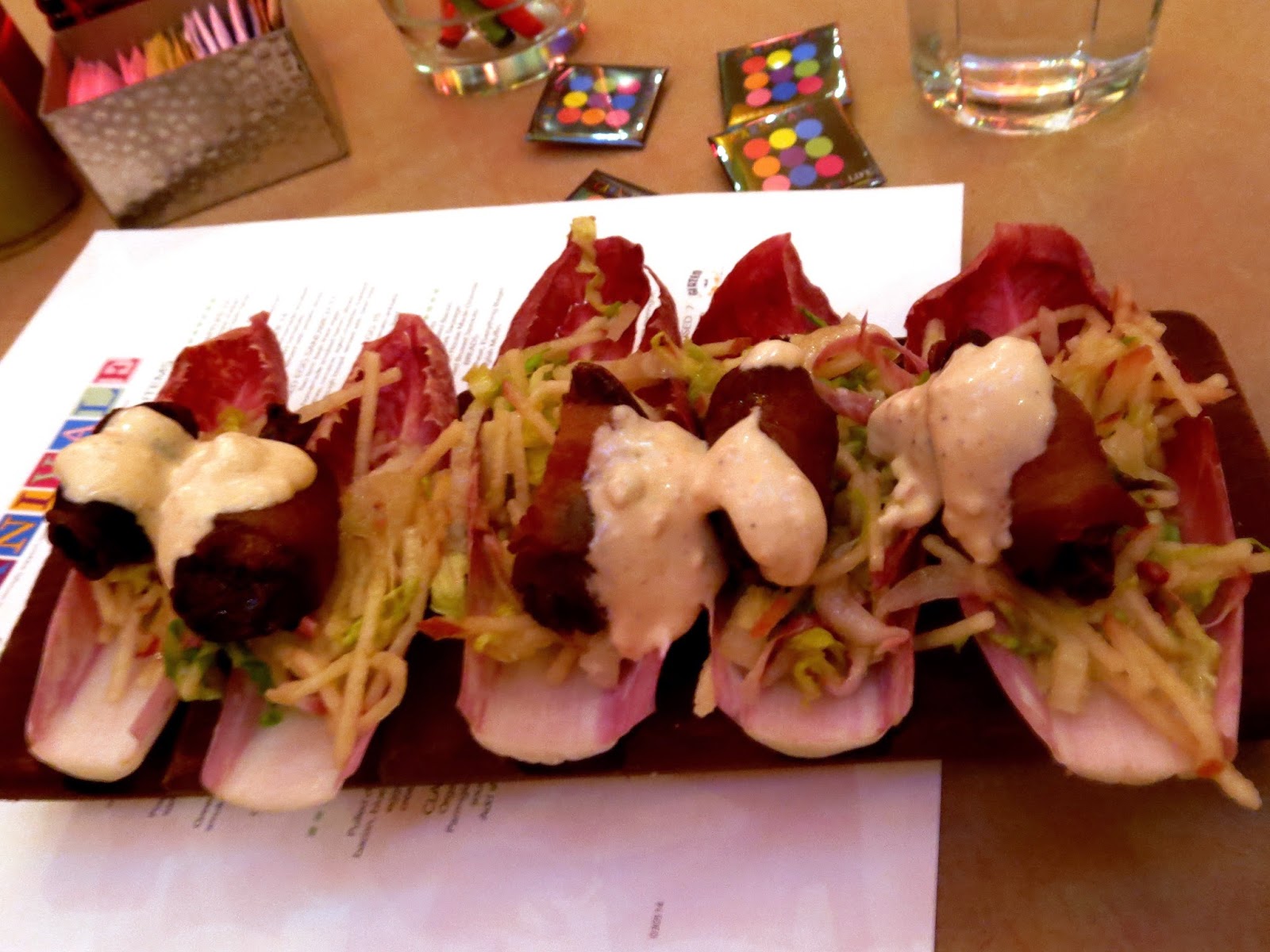 They started off their meal with some Bacon Wrapped Dates.  These little beauties came beautifully presented on a red endive leaf with some bleu cheese dressing and a sour apple slaw.  Brandy loved the smokey sweetness of the dates mixed with the vinegary slaw and the creamy dressing, and the textures of the crisp apples, soft dates, and crunchy almond in the center were an absolute delight to the senses. 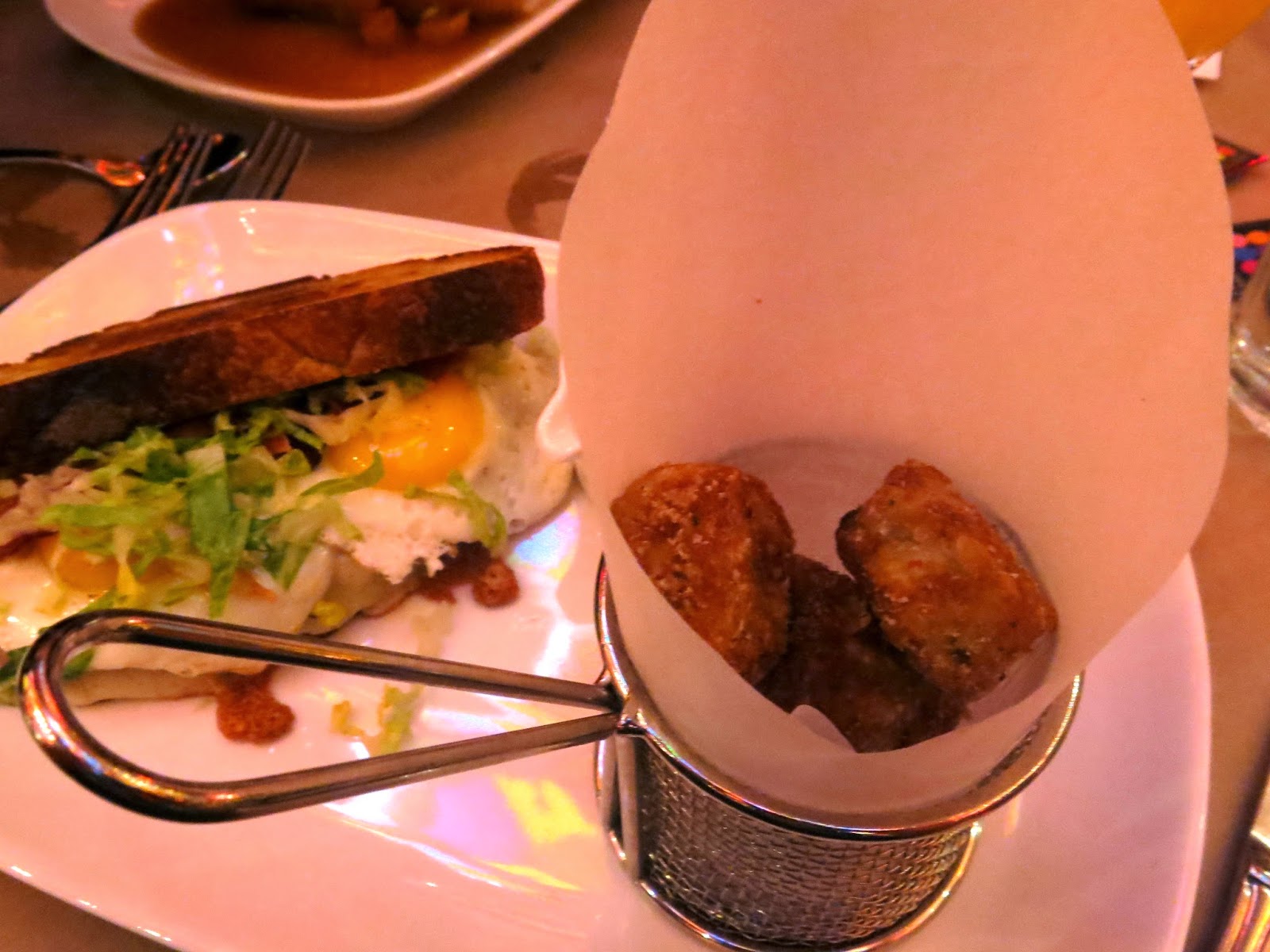 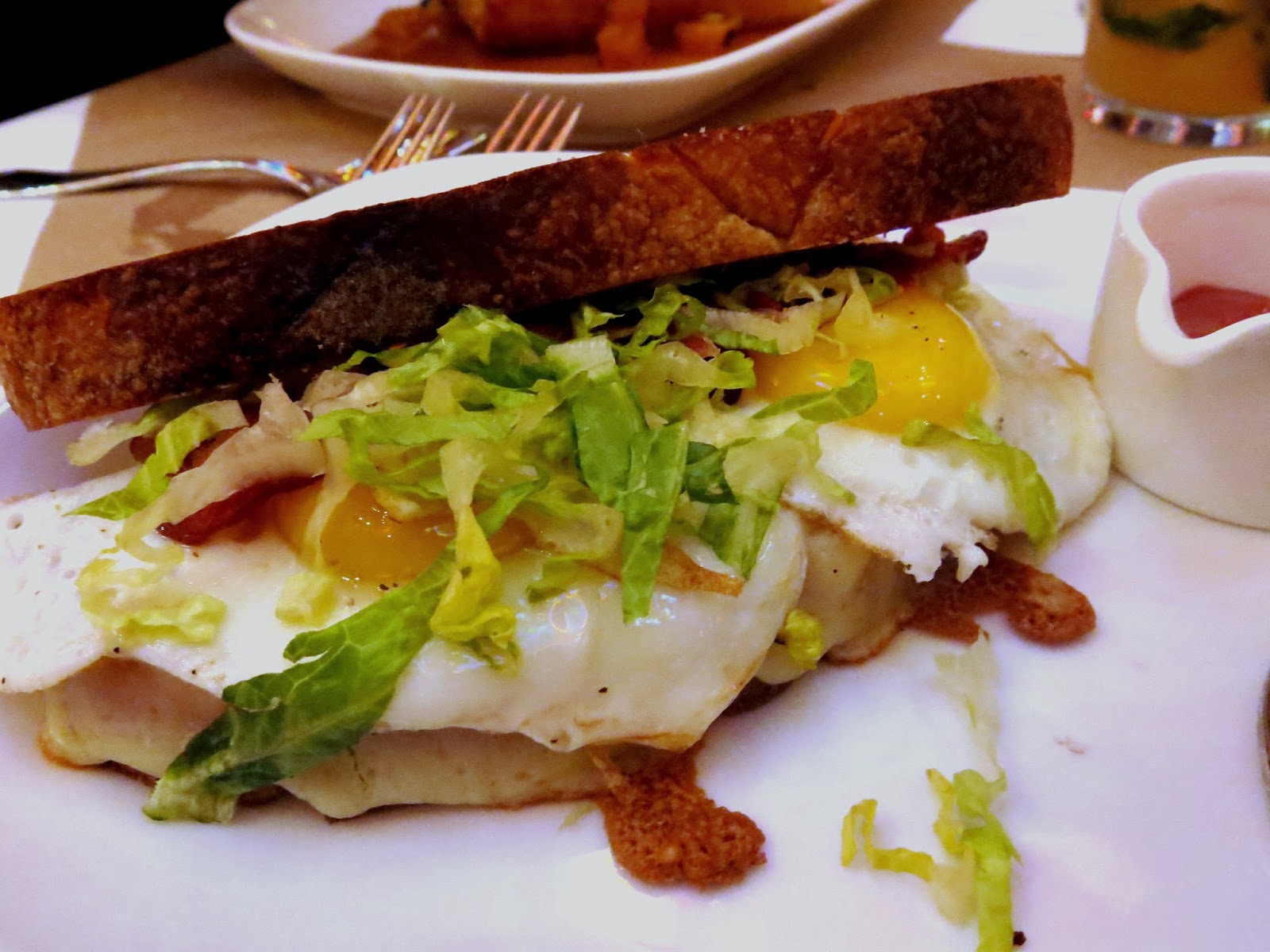 For their entrees, the lovely server explained that at Carnivale, the diners were encouraged to order dishes for the table and dine family style so that everyone could get a taste of everything.  Going with that spirit, The Baron decided on the Fried Egg Sandwich as well as the Key Lime French Toast.  "Sweet and savory are your M.O., I believe, yes?" he asked Brandy with the raise of his eyebrow.  Brandy tried the sandwich first, which came with a side of house-made "tater tots."  The so called taters were actually quite unique; Brandy thought them more like croquettes with their soft interior and crunchy coating, though with such attention to detail in everything else, she would have liked to see a more creative dipping sauce than ketchup.  The sandwich was done very well, with the richness of the egg and melty cheese cut by the addition of some tomato and lettuce.  The crusty toasted bread held together fairly well, but the sandwich did leave the eater's fingers and little less than pristine, though as Brandy said, "It's not a good egg sandwich if your aren't licking your fingers after finishing it." 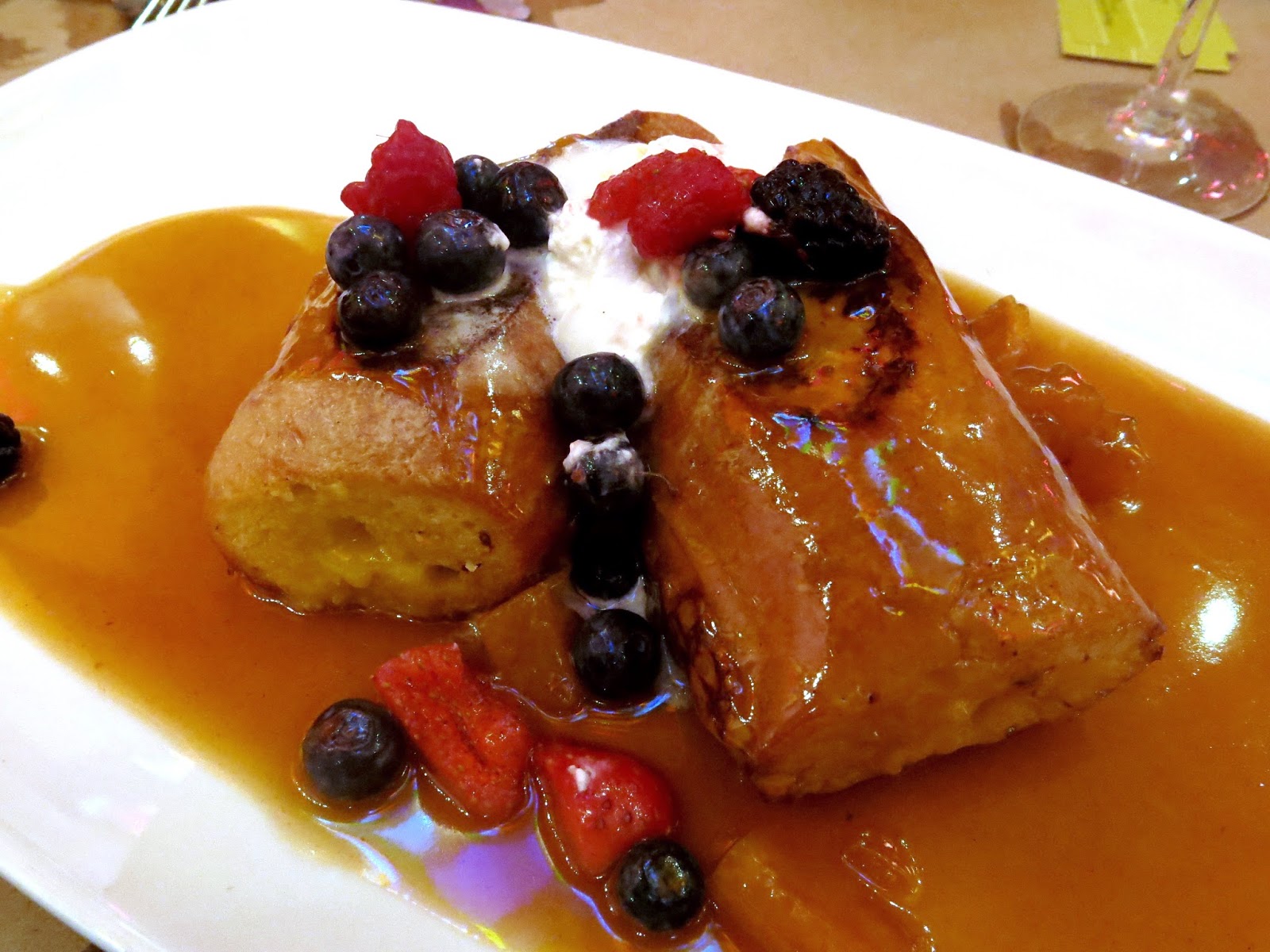 The Key Lime French Toast was one of the most original dishes Brandy had ever seen at a brunch table.  The bread seemed to be a bolero style roll, as it had a tougher, chewier exterior than more French toasts she's come across, but the inside was soft, supple, and yielded a filling of key lime cream.  The toast had also been covered in a pineapple syrup and sprinkled with fresh berries, which helped to break up the sweetness with a dash of tart.  "This dish tastes of sunshine," The Baron remarked in amazement, "And I'm not normally a fan of sunshine." 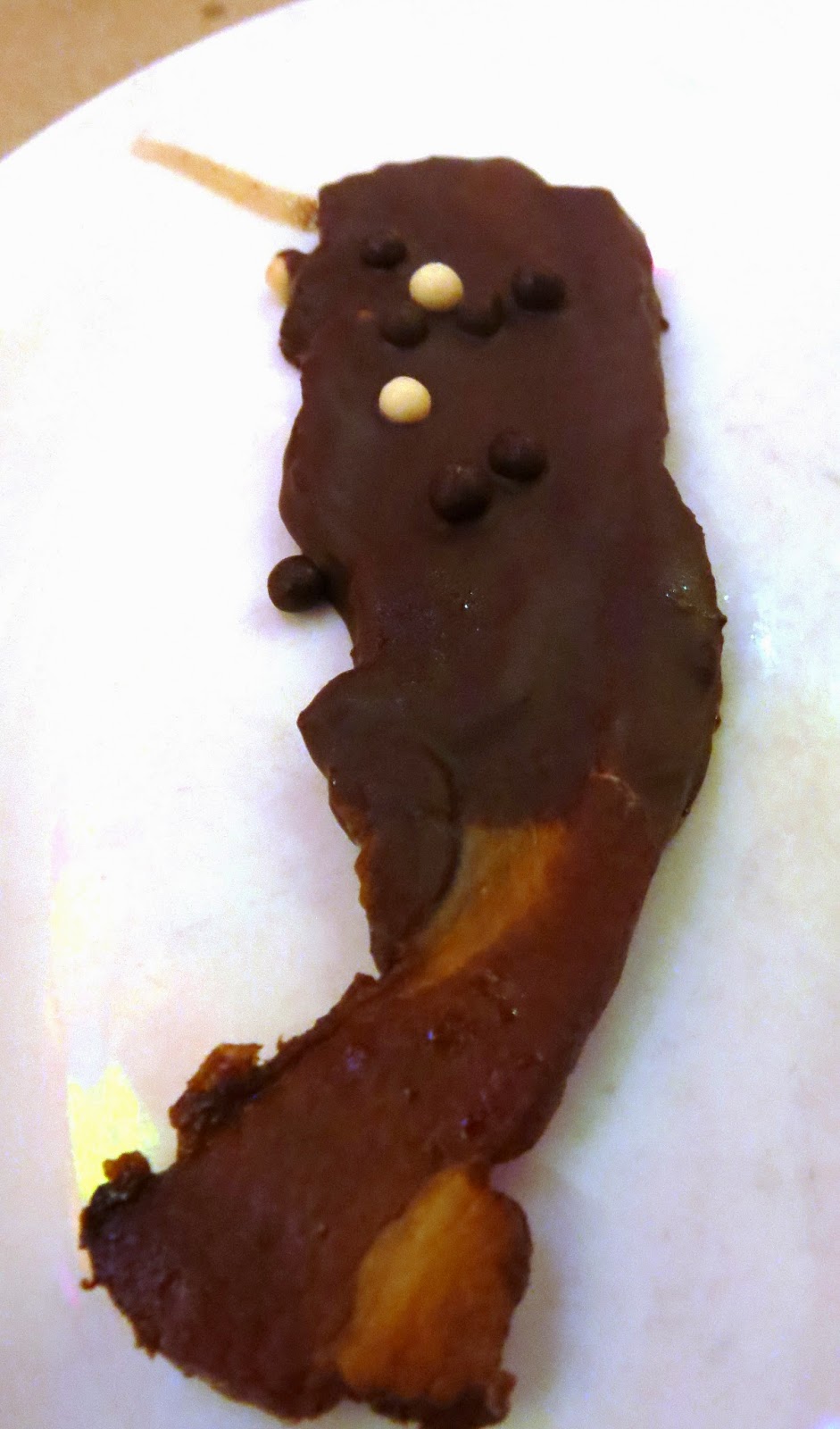 Lastly for dessert, The Baron threw caution to the wind and ordered up some Chocolate Covered Bacon.  "My dear, we've already had two courses with bacon today," Brandy reminded him.  "And we shall have three!" he roared grandly, "After all, this place has re-ignited my thirst for hedonism.  No pig shall be sparred from the furry of my gullet!"  The bacon, which was house made, came thick cut and enrobed in a generous coating of dark chocolate.  It was meaty, salty, smokey, and rich, or in other words, everything one could expect of such a dish.

Between the extraordinary atmosphere, the creative and decadent menu, the stellar service, and the surprisingly reasonable prices ("$5 cocktails?!" Brandy exclaimed when she saw the check, "Bring me three more!") Brandy and The Baron found their morning at Carnivale to be simply exemplary.  "Perhaps I have been neglecting the more cheerful things in life lately, " The Baron lamented, "Sometimes a spot of sunshine and a coudry of color can do a distressed mind some good."  "Yep.  And a good cocktail doesn't hurt either!" was Brandy's reply. 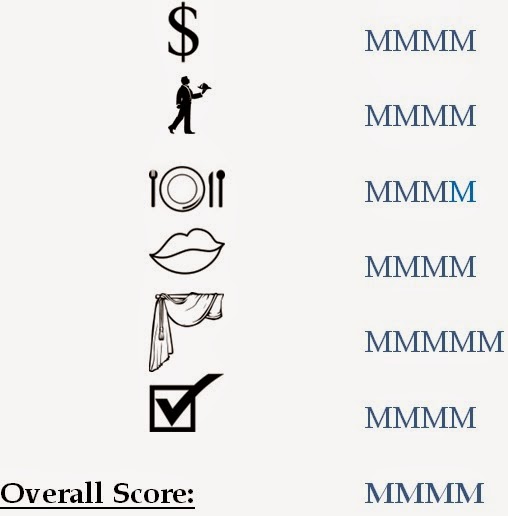