A Savory Summer Evening at Filini

It was a rainy summer night when Brandy showed up in the lobby of the Radisson Blu in downtown Chicago, looking for all the world like a drowned rat, dripping water into the fine furniture.  She had been invited to a dinner at Filini, the chic, elegant Italian restaurant inside the hotel, which had recently launched a new menu of authentic Italian cuisine, like house-made pasta and fresh seafood.  "I'm going to need a cocktail and a hair dryer," she told one of the hostesses. 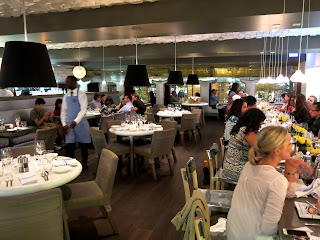 Filini immediately gave off a classy vibe, not only because of the clean looking white and gold decor, but also because of the three piece jazz band playing softly by the buzzing bar.  The lower level seemed to contain more of an after work crowd, enjoying cocktails and small plates, while the second level dinning room was a bit more mellow and relaxed for those enjoying their dinners.  Brandy heard tell of the third level, which featured a terrace with beautiful views of Millennium Park, but unfortunately, the rain that day prevented full enjoyment of that feature. 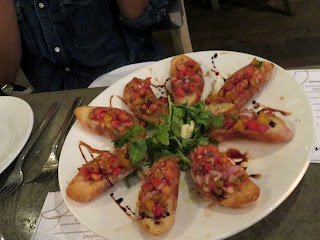 The evening began with some lovely Bruschetta with heirloom tomatoes, balsamic drizzle, and fresh arugula.  The presentation of such simple Tuscan flavors was a great set up for everything else to come.  Even something as simple as this dish was treated with a sense of dignity, as the servers scraped fresh Parmesan from a gigantic wheel in the middle of the room to accompany the bruschetta. 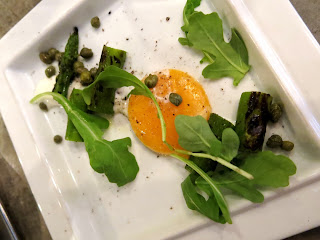 The first course was an asparagus dish with lemon cream, capers, and a single egg yolk.  Brandy delighted in the clean, richness of the dish, with the charred flavor from the roasted asparagus and a bright bite form the vinegary capers. 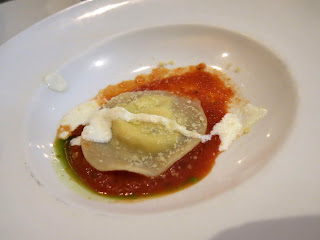 After that came a Ravioli, one of several dishes that night to feature the made in house pasta.  The filling was a combination of traditional Italian cheeses, which worked rather well with the tomato based sauce and some fresh basil oil.  The pasta was perfectly cooked and the thickness was just enough to give a little bit of a chew without overwhelming the fluffy cheese filling. 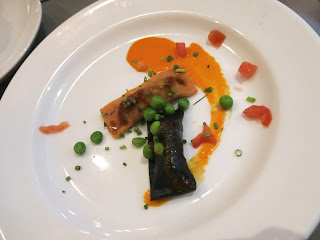 Next came a couple of Angelotti; candy shaped squid ink pasta stuffed with lobster and topped with a roasted pepper sauce and green peas.  Again, the pasta had the perfect al dente texture, though the filling wasn't Brandy's favorite, as lobster had been almost pureed, where as she would have liked a little bigger pieces.  She did however very much like the slightly smokey sauce and the freshness of the peas. 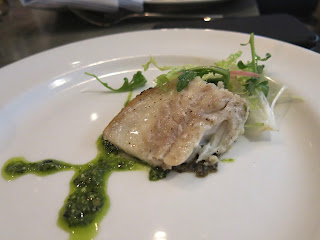 Moving on to proteins, the next course was a grilled piece of sea bass with greens and a salsa verde that more resembled a pesto.  The fish was flakey, moist, and very well seasoned.  Again, Brandy admired the restraint in this dish, which was designed to show off the splendid sea bass in all its glory, rather than overloading it with all sorts of flair and bother. 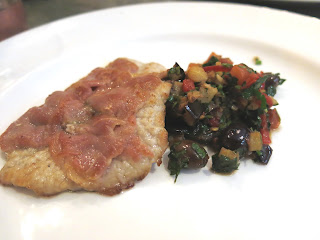 The final savory dish of the night was a tender cut of veal with prosciutto, sage, and putanesca.  Though not a huge fan of olives, Brandy did enjoy how well the putanesca paired with the salty prosciutto and the juicy veal, all tied in with the earthiness of the sage leaf hidden underneath the meat. 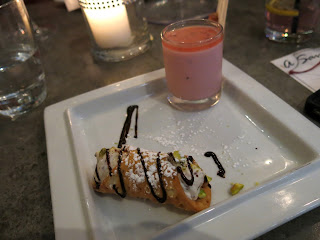 Winding down the indulgent meal with some desserts, the group was presented with some strawberry panna cotta and an adorable little cannoli.  The panna cotta had a thick, almost jelly like texture to it and was packed with milky, strawberry flavor.  The cannoli was another example of an Italian staple done very well with its crispy shell and creamy filling set off with some crunchy pistachios. 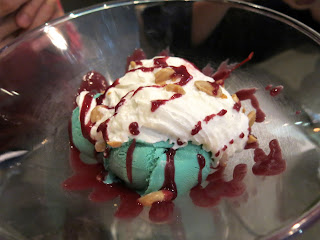 Finally, a parade of stunning gelato sundaes served in massive martini glasses made their way to the group, coming in flavors like S'mores, Banana Split, and Salted Caramel.  What turned out to be Brandy's favorite of the group actually ended up landing right in front of her: the signature Blu gelato, which was flavored with a sweet white marsala wine and topped with a fresh strawberry sauce, slivered almonds, and whipped cream.  Not only was the dessert a delight to behold, its flavor was unexpectedly sophisticated with a subtle fruitiness that matched well with the sauce and the nuts.

Brandy was mightily impressed, all in all, with everything Filini had to offer.  The attention to tradition as well as a few modern twists meant that the vast majority of dishes would please just about any kind of diner, from foodies to someone just out for the night.  In fact, Brandy had enjoyed the meal so much, she had forgotten all about the rain outside.  "I was thoroughly convinced for a minute there that I was in a trendy restaurant in Rome on a balmy summer day... perhaps I'll stay here a while longer and have enough cocktails to convince me that really is where I am," Brandy mused.

The writers of this blog were invited to dine at this restaurant free of charge in order to facilitate the writing of this post.