Fig & Olive or The Giving Tree 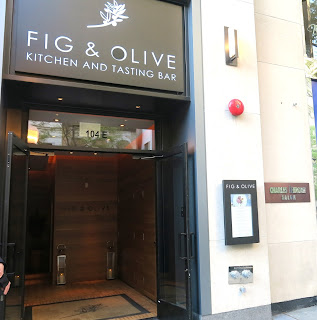 Goodness knows Brandy has done a lot of traveling in her life, having lived on every continent, (including that penguin sanctuary in Antarctica) at some point or another.  Her decision to ultimately settle in Chicago was made for several reasons, and while she has never regretted that decision, she does often long for a different atmosphere for a minute of two.  "This summer has been so bloody humid," she said one day, wiping the sweat from her brow, "The only time I ever remember enjoying humidity was when I was backpacking across the Italian coast.  I used to wander in and out of those little villages, sampling all the fresh and simple foods of the region, then watching the sun set below the water... ah, those were the best summer days of my life!  What I wouldn't give for a little taste of that region now." 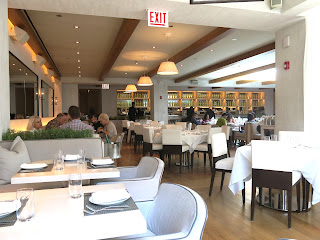 Luckily, Brandy stumbled upon Fig & Olive in the Gold Coast, the only Chicago location for the line of fine dining restaurants, based on the cuisines of Southern France, Italy, and Spain.  So devoted to the distinct ingredients of their namesakes was Fig & Olive that not only did they have fig recipes all over the menu all year (their figs being grown specifically for them by a single farm in California), but also the fact that no butter is ever used in any of their savory dishes, choosing instead to utilize a vast array of olive oils. 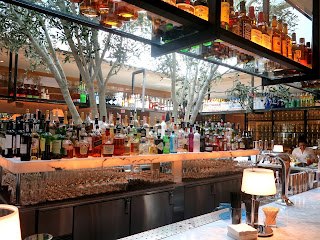 The elegant dark wood entrance to Fig & Olive led to a gold doored elevator, which took diners up stairs to the host station, bar, and one of two dining areas (the second being located on the third floor, which included a small balcony patio).  The impressive bar was the first thing to catch Brandy's fancy, as at its center stood what looked to be an olive tree, reaching its branches up to a sky light above.  The tree, it turned out, wasn't real, but did represent an actual tree at the center of another one of Fig and Olive's locations and set the perfect impression for the fresh Mediterranean cuisine they were so famed for.  The rest of the restaurant was done in white and gold with orange accents, giving it a warm and breezy feeling.  "I feel like I'm walking the coast in Amalfi already!" Brandy sighed. 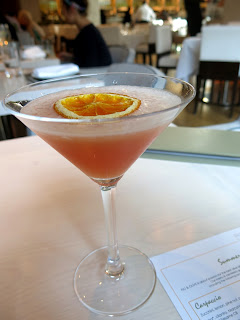 The morning started with one of Fig & Olive's signature cocktails, the Rossellini, which consisted of blood orange juice, lime juice, and passion fruit flavored vodka.  Brandy found this to be a nice, zingy twist on a Screwdriver, with the lime juice taming the sometimes too sweet passion fruit flavor into a smooth, bright finish that was perfect first thing in the morning. 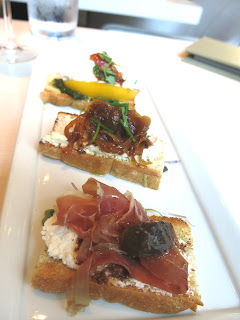 She started her meal off with some of the Crostini, asking for three flavors of the chef's choosing.  What she ended up with was three absolutely beautiful looking varieties: one with prosciutto, ricotta, fig, and walnut, another with goat cheese, manchego, and chive, and a third with burrata, pesto, tomato, and balsamic drizzle.  Each crostini settled its variety of toppings on a simple, crunchy toast slice, all of which held their shape and texture without going limp or soggy.  All three of the flavors seemed to Brandy to be the perfect little bursts of flavor, with the slightly sweet and salty prosciutto and fig one standing out a little as Brandy'a favorite. 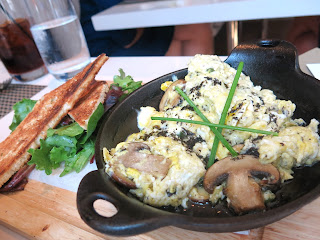 Next up, Brandy luxuriated in some Truffle Mushroom Fontina Scrambled Eggs, with came served with a few more pieces of toast.  Seeing that, her British instincts kicked in and she quickly scooped some of the eggs and mushrooms onto the bread.  The perfume of the truffle oil kicked in as she brought the toast near to her face, and she was pleasantly surprised that the eggs actually tasted of truffle as well.  The mushrooms were a nice touch and added to the earthiness of the eggs, but Brandy's eternal lust for dairy products left her desiring a little more cheese. 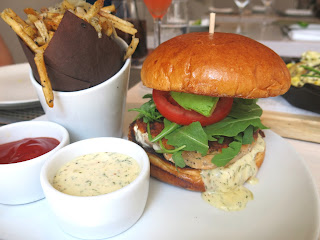 On the more lunch side of the menu, Brandy decided to give the Salmon Burger a try.  The substantial burger came dressed with tomato, arugula, shallots, and a caper and dill mayonnaise and came with a side of skinny fries with even more truffle olive oil on them.  Though not the biggest fan of salmon, Brandy really enjoyed the burger, which was rather fresh tasting, meaning it went down lighter than one might expect.  The sauce didn't over power with the dill, letting the tender fish be the true star.  "It's a little unexpected to have a chilled burger," Brandy commented, turning the brioche bun over in her hands, "But I have to say I rather enjoy it!"  The fries too were a pleasant surprise, as their size made them uniquely crispy.  Again, the truffle oil tasted authentic, and the addition of lots of Parmesan cheese only added to the richness. 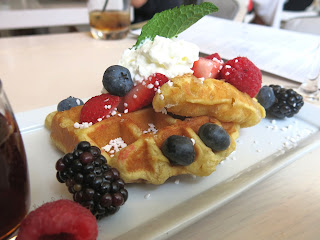 Lastly, Brandy had just enough room for a little something sweet.  She ordered up a Waffle, which came served with pearl sugar and some fresh berries.  The simplicity of the toppings and presentation delighted Brandy, but she was even more thrilled when she realized that this waffle was not the typical Belgian style, but a less common Liege waffle.  This meant that the texture of the waffle was more chewy and dense, rather than fluffy and crispy, or in other words, more like a cookie or a pastry than a pancake, and the flavor was very much caramel and vanilla.  The little bits of pearl sugar provided a lovely little crunch, and because fresh berries had been served, they helped to add some tartness to the whole plate.

"I don't think I've felt this pleasantly full in a very long time," Brandy sighed as she patted her belly, "Everything was just so fresh and light that, while I feel satisfied, I don't feel weighed down.  This is just how I used to feel after spending all day sitting on a bistro patio, munching away on all those Mediterranean tidbits so long ago!"  Prices were a tad on the steep side (most everything was between $12 and $20 a plate), but were easily justifiable when one considered the quality of ingredients and the attention to detail in the food, and though the restaurant was buzzing, Brandy had rarely felt so relaxed by an atmosphere that didn't include an actual beach.  "Now that I've had some figs and plenty of olives, I think I'm due for a little relaxing walk down to the ocean...uh, I mean...the lake."  Unfortunately for Brandy, that happened to be the weekend of the Air and Water Show, and the Blue Angels made her stroll by the water a little less than calming. 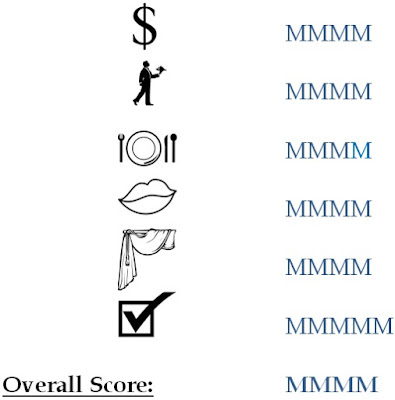