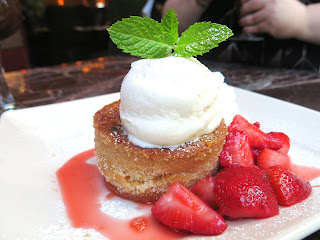 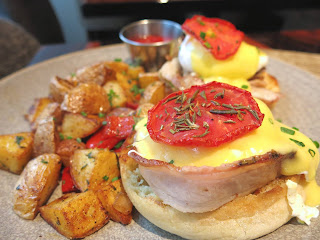 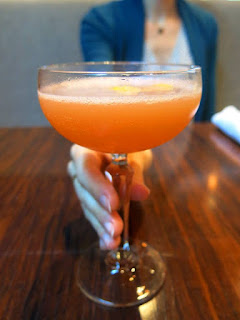 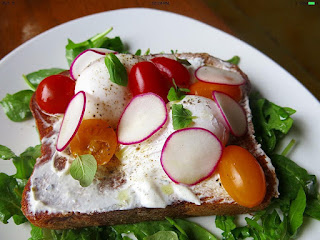 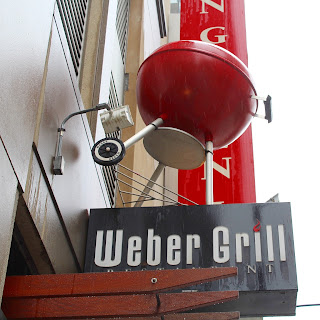 Brunch buffets can be tricky. Buffets are great for large or mixed groups, especially when those groups contain picky eaters, because chances are better that everyone can find something they'll like. Sometimes buffets are also the most economical option, but not always the most delicious. Sometimes they are overwhelmingly loaded with amazing food, but also with overwhelming price tags. The choice usually boils down to luxury or basic survival with very little in between. Over the years, I've taken mental note of a handful of buffets that I think do a good job of providing quality food for the price they're charging, and this small list usually ends up being some of the places I recommend most often.

After seeing some interesting items on Weber Grill's Easter brunch menu, I was curious to check out their breakfast buffet. I entered into it with a hopeful outlook and a touch of skepticism; hopeful in that I've had Weber's perfectly grilled cuisine before, but skeptical because their website didn't list much more than a few items. I took Starr along with me (she is a burger expert after all) and we settled in for what we hoped would be some delicious meaty offerings. 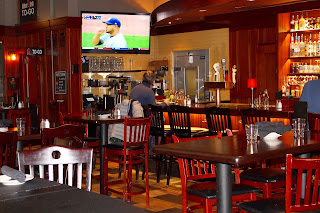 Weber Grill's interior is a little dark with a definite masculine aesthetic in the woods and red tones throughout. We settled into a comfy booth by a window and our adorably chipper server, Igor, made sure we had water and (in my case) coffee right away. We then sampled a couple of their breakfast cocktails while we created our game plan. The house mimosa was pretty simple, and actually tasted quite fresh. The Backyard Bloody Mary was made with their house mix and boasted a garnish of smoked Gouda, sausages, pickles, olives, and a chaser of Weber's own Backyard Brew. Though I'm not the biggest fan of bloody mary's, this one had a nice briny flavor with just a little kick of spice that I rather enjoyed. 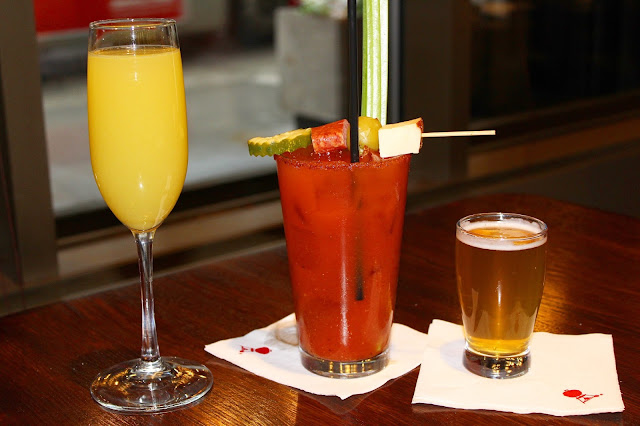 The small selection of buffet items had been set up along the side of the bar, and the kitchen had a few items they could make to order. We decided to have the kitchen fix us up some sweet dishes while we composed our plates. Aside from the normal stuff you'd expect to see on a buffet (fruit, yogurt, cottage cheese, various bagels, pastries, cereals, and muffins), we were a little saddened to find only four hot dishes; scrambled eggs, house potatoes, bacon, and sausage. We took a little bit of everything back to the table and methodically tasted our way through them. What we discovered was that everything was actually cooked really well. The eggs were still moist and fluffy, unlike a lot of other buffet eggs I've come across, and the meats weren't overly greasy. The potatoes ended up being the best part, as they alone showed signs of the Weber Grill I know and love; along with the perfectly crisped spuds, there were chunks of tender steak. 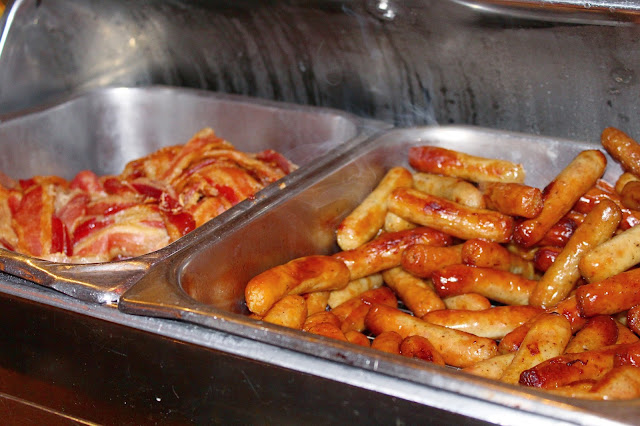 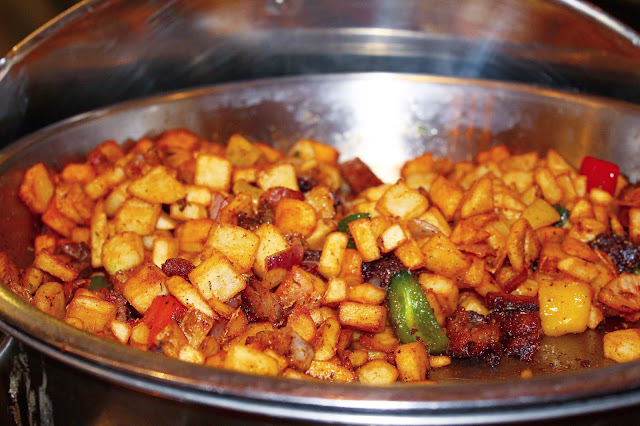 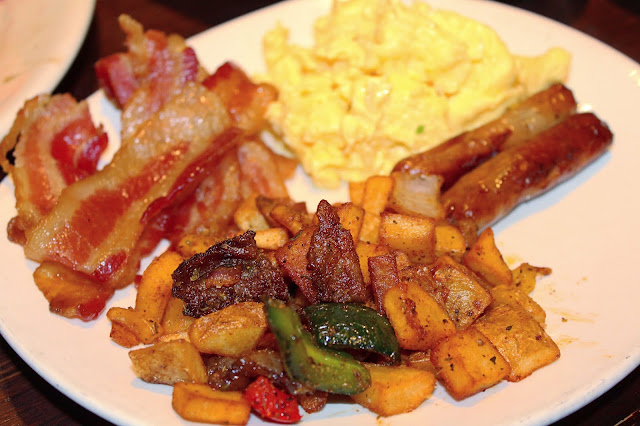 Now, I don't mind a smaller buffet, and the food that was on this buffet was surprisingly good. I was just disappointed that there wasn't anything there that showed off the Weber brand. No grilled meats or veggies, nothing fire roasted or broiled or skewered. Just a simple continental breakfast. Now granted, this buffet will run you less than $20 a person, and for those kinds of prices, I'm more than certain that most people can get their money's worth. I guess I was just expecting to see a little more personality.

Igor cheerfully delivered our freshly made sweet dishes: some French Toast and a Belgian Waffles. Both had been garnished with fresh berries, fresh whipped cream, and came served with butter and maple syrup. Again, these were both plenty tasty, just not very creative, and with so many other restaurants in the area vying for attention, it was hard for me to understand why Weber wouldn't want to add a little more sparkle to their menu. After chatting with a few of the employees there, I came to understand that the buffet was created to offer the guests in the hotel upstairs an easy option, rather than to entice people off the street. This made total sense, and for a "hotel breakfast buffet," I think what they were putting out was pretty good. I just wanted more... fire. 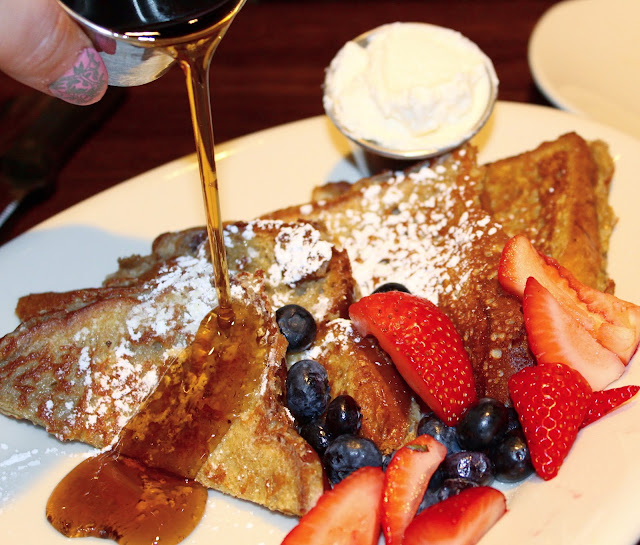 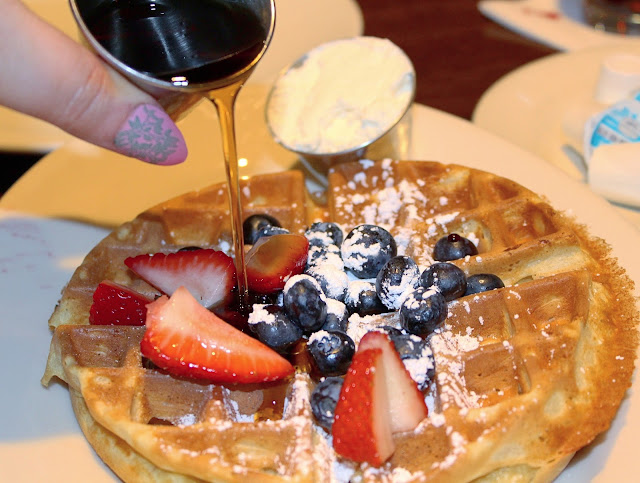 Starr and I decided to stick around for the lunch service, which started at 11:00, so that we could remind ourselves what Weber Grill was really all about. We ordered a Firestarter Sampler, which came with a skewer of shrimp, chicken, steak, and BBQ ribs. Now this was what I pictured when I think of Weber Grill! Glistening meats with perfectly seared grill marks, wonderful marinades, and succulent seasonings, ready to be picked up and consumed in the most primal kind of way. 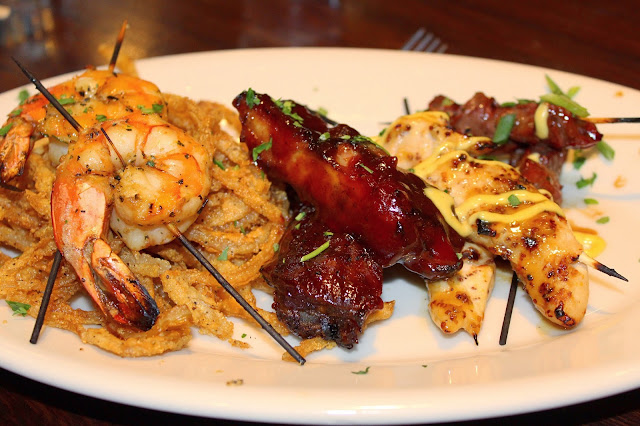 Starr decided to try out the Pulled Pork Sandwich, which came dressed with their house BBQ sauce and topped with a scoop of creamy cole slaw. This was backyard eating at it's finest, with lots of finger licking and lip smacking and sauce going absolutely everywhere. I went for the Prime Burger, which was topped with bourbon grilled onions, Wisconsin white cheddar, and fried pickles. The cheese had a bit of a mealy texture to it, but otherwise, this was a perfect burger, with plenty of flavor and a perfect char on the outside. 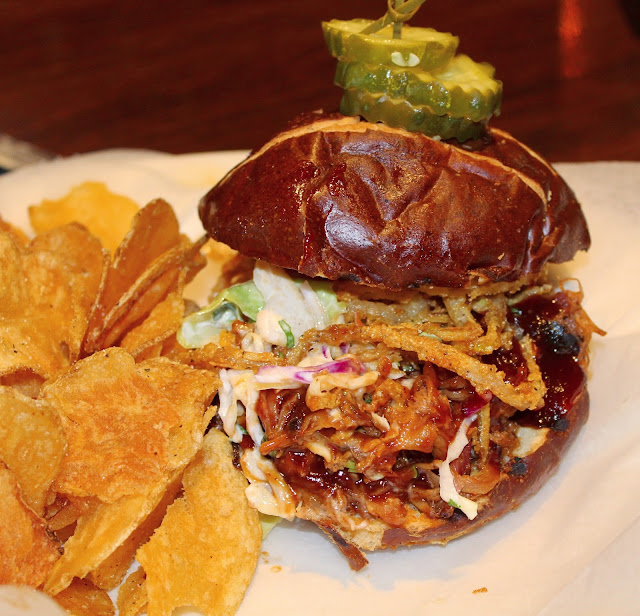 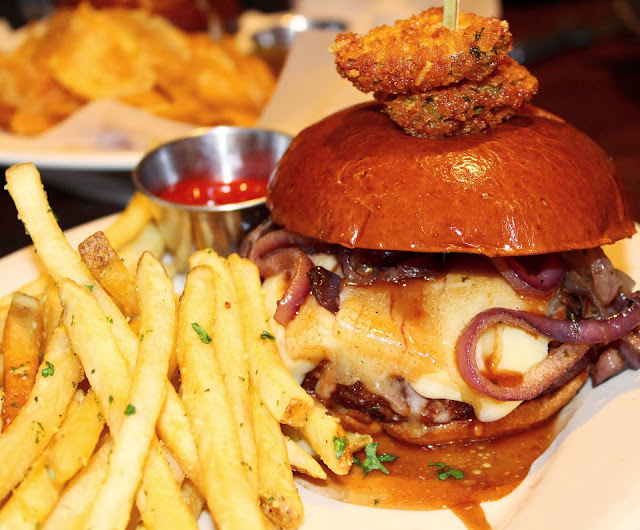 At the end of the day, if you're looking for a breakfast buffet that is quick, good, and not overwhelming to the senses or the wallet, Weber Grill is a great option. But if you're looking to satisfy your carnivorous cravings, get there after 11:00 and order from the lunch menu instead.

I was given parts of my meal free of charge in exchange for an honest review.

Posted by Bunny and Brandy at 1:01 PM No comments: