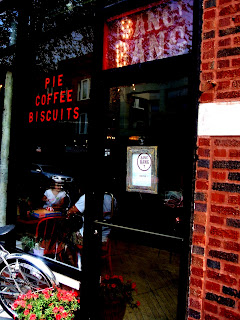 There is a very fine line between breakfast and dessert.  It can be hard to distinguish a pastry meant for morning like a cheese danish or a chocolate muffin from an eclair or a devil's food cupcake (hint: if it has icing or frosting, its a dessert, but if it has a glaze, its breakfast) and when pancakes, waffles, or French toast start to take on flavors like red velvet, carrot cake, or strawberries and cream, that fine line becomes almost microscopic.  Lovers of more savory foods may find this a line they dare not tread, but Brandy, whose sweet tooth has been known to lead her into burning buildings (it was to retrieve a pan of cinnamon rolls) will gladly tap dance over the line every morning. 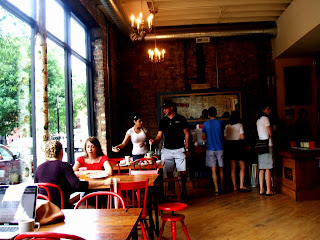 This may be what led to this week's rather unusual brunch choice, Bang Bang Pie Shop in Logan Square.  Though not open on Sundays, Bang Bang Pie Shop does offer their wears on Saturday mornings, and Brandy was rather surprised to see the quaint little store front buzzing with people at 11:00 am.  "How in the world did this many people decided to have pie for breakfast?" Biscuit wondered as they staked out a table against an exposed brick wall.  "Pie cravings are powerful things," Brandy said knowledgeably, "One never knows when they're going to strike, but when they do, by God you better find some pie or risk starting fights with random strangers."  Biscuit knew enough not to ask Brandy if she was speaking from personal experience.

The menu was limited to only a few items at any given time: fresh roasted coffee served hot or iced, three seasonal flavors of pie (Bang Bang usually keeps on hand a cream pie, fruit pie, and chocolate pie), and home made biscuits.  The pies on offer that day happened to be a simple Blueberry Pie, a Chocolate Banana Peanut Butter Pie, and what they were calling a Summer Pie, which turned out to be an frozen pie (or ice box pie) made from sage ice cream, lemon curd, and raspberries.  Brandy went ahead and ordered a slice of each for she and Biscuit to share, as well as two of the biscuits, one plain and one with gravy.  The perk of the unadorned biscuit was the trip to the "toppings bar" which included several herbed butters and home made jams. 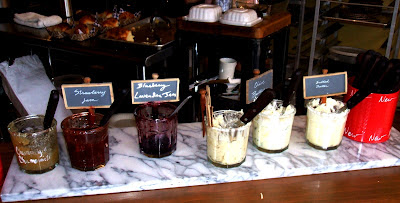 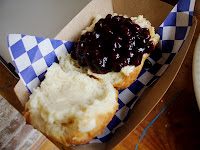 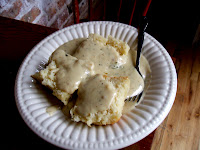 Starting out with their biscuits, Brandy and Biscuit found them to be buttery, light, and just a little bit crumbly.  Biscuit loved the creamy gravy that topped hers, which was spiked with bits of sausage.  Brandy had loaded her biscuit with Black Pepper Honey Butter and Blueberry Lavender Jam.  The pop of the berries was just perfect and floral jam was lovely and subtle.  "Well, at least the biscuits are legitimate brunch food," Biscuit mumbled cheerily through a mouthful of gravy.  "Anything I eat at 11:00 in the morning on a weekend is legitimately brunch," Brandy said seriously, "Whether its a cheeseburger, a crumpet, or a pint of ice cream.  It's a state of mind, dear, not the state of your plate." 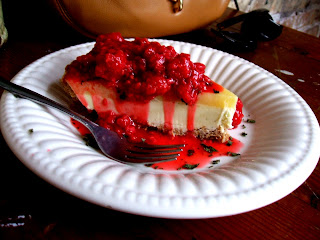 Next, they started in on the Summer Pie before it had a chance to melt.  Though not a huge fan of lemon, Brandy found the pie to be refreshing, creamy, and light, with a nice soft finish.  The ice cream didn't taste overly herbaceous at all, and the raspberries on top made for an even brighter flavor. 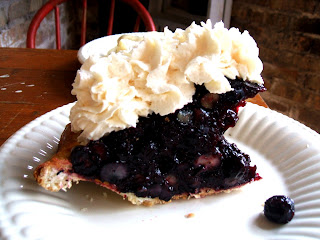 Though the simplest of the three, the Blueberry Pie was probably their favorite.  "This defines what pie should be," Brandy gushed.  The combination of fresh and cooked berries made for a nice, natural sweetness as well as a mix in texture and the crust was perfectly tender and flaky.  Brandy detected just a little bit of herbiness in the filling and wondered if some sage, or perhaps basil, had been included for a slight twist. 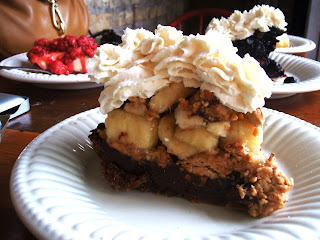 Last, but no least, was the Chocolate Peanut Butter Banana Pie.  After having already polished off a biscuit a piece and two other slices of pie, this rich concoction was a daunting mountain to climb.  The velvety fudge at the bottom of the pie had been mixed with peanut butter, making it stick to the roof of one's mouth, so much so that each bite took a good blissful minute or so to chew.  The sliced bananas on top were almost light enough to break up the richness, but the addition of a cookie crumb crust just made this pie all the more indulgent.  "Even I admit this may be better suited to dessert than brunch," Brandy relented.

Though a controversial brunch to say the least, by the time they cleared off their table, Brandy and Biscuit were very much in love with Bang Bang Pie Shop.  A peaceful atmosphere, helpfully informed staff, and nothing on the menu over $10 (slices were $5 a piece and biscuits started at $2.50) means Brandy has found the perfect spot for squelching those unpredictable pie cravings.

Epilogue
Waddling out of the pie shop, Brandy and Biscuit headed off to the movie theater for an afternoon showing of Magic Mike.  "Its another one of those movies about the little English wizard boy, right?" Biscuit asked.  "I think this one's a musical," Brandy replied, "There's a lot of dancing in the commercial." 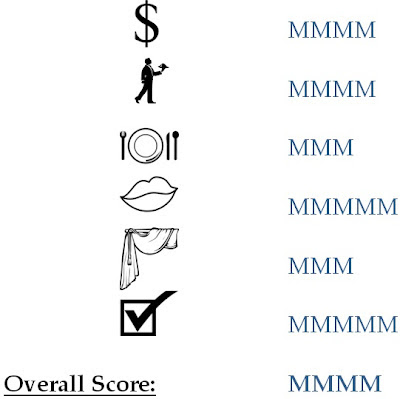 Posted by Bunny and Brandy at 9:10 AM