Back in the summer, I was first introduced to the meat master that is Chef Bryant Anderson. At the time, he was showing off his evil genius brunch creations at Rackhouse, like the Breakfast Waffle Nachos and a $50 Bloody Mary that came adorned with a barnyard's worth of meat products. Since then, he has opened up Broken Barrel Bar in Lincoln Park, a sports bar focusing on house smoked meats in the same vein as Rackhouse, but with a little more of a cosmopolitan feel.

I had a chance to visit them for dinner service just after they opened, and let me tell you that I have never been more excited to stuff my face with meat. Even their vegetable based dishes were spectacular, like the Brussels Sprout Nachos and the customizable mac and cheese (both of which can have meat added to them), and this might be the only non-Cuban restaurant in the city that offers fried plantains as a side AND a dessert. Their beer collection and menu of simple but delicious cocktails is also pretty impressive. 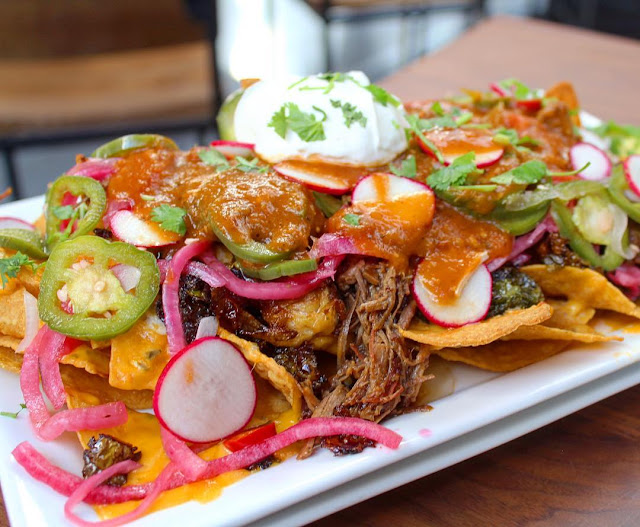 Needless to say, when I found out Chef Bryant was finally launching brunch at Broken Barrel, I was all over it. His brunch service mainly consists of an abbreviated version of the dinner menu along with five (for now) special dishes, only offered on weekends. I took along my buddy Chris so that I wouldn't have to suffer from the meat sweats alone.

Knowing how amazing Chef Bryant's award winning dry rub wings are, I insisted we start with an order of those accompanied by a selection of their house made sauces. Also, you know, if was Sunday and the Bears were playing, so you gotta have wings! Chris is a bit more adventurous in the spice department, so he was curious to sample the two hottest sauces on the menu; The Hellraiser and the Sex Panther. I had the tiniest taste of the Sex Panther, and while the flavor was actually amazing, the prolonged fire mouth that followed had me staying the hell away. Instead, I went for the Sticky Curry, which is the perfect example of something that is spiced without being spicy. 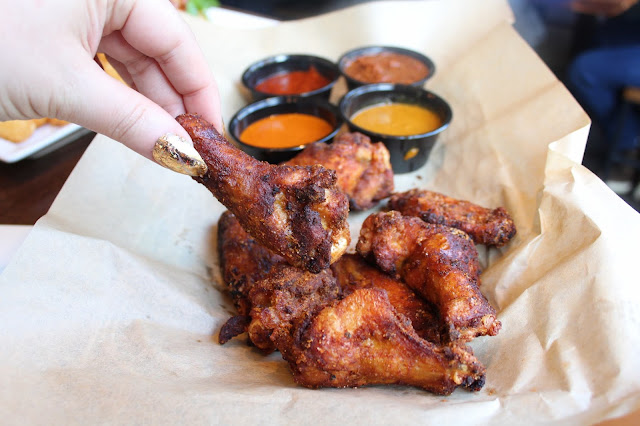 First up on the brunch dish docket was the Hangover Breakfast Sandwich, which I had already tried as part of Rackhouse's brunch menu. This mammoth stack has a foundation of hickory smoked brisket, topped off with Merkt's Cheddar Cheese, chipotle mayo, a pile of crispy fried onions, and fresh peppery arugula. The thing is, when you call something a "hangover sandwich," you would expect it to be greasy, but this thing is actually quite refined and really well balanced. The brisket is definitely the star of the show, and that sharpness from the cheese and the mayo makes for the best kind of contrast. 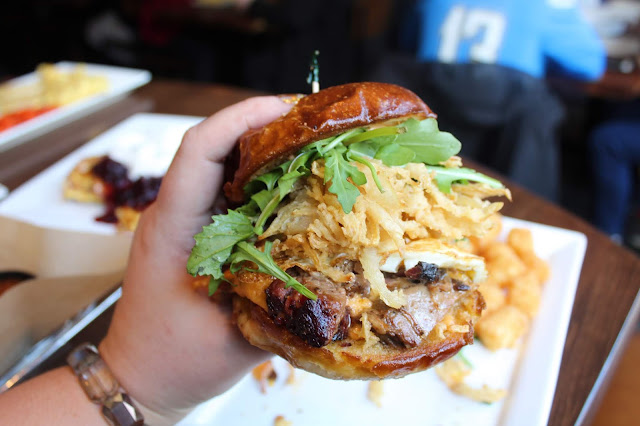 Next up was the Breakfast Burrito, which came stuffed with eggs, tomatoes, bacon, black beans, scallions, and cheese. I was pretty into this sucker, which surprised me, because beans are usually a huge turn off for me. But with the sweetness of the marinated tomatoes and the really flavorful bacon, I was actually very happy. 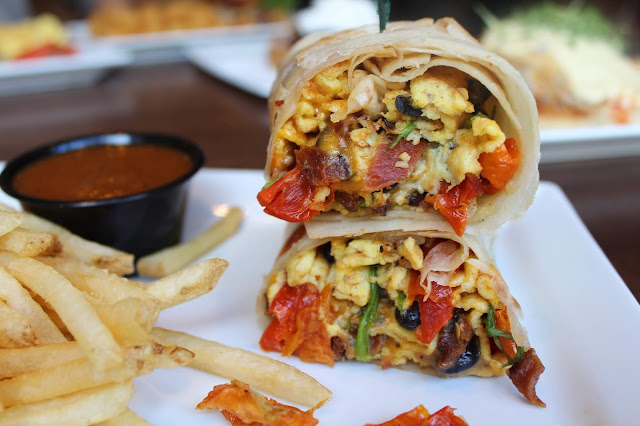 On the lighter side was the Smoked Salmon Plate; a pretty typical presentation of lox accompanied by sliced avocado and toasted English muffins. The really unique aspect here was actually the scrambled eggs, which came stuffed with whipped ricotta and scallions. Honestly, I could have been happy with those eggs alone. The salmon just became a bonus! 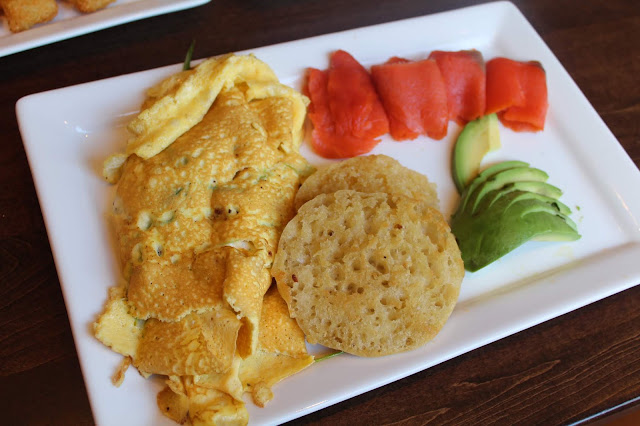 No brunch menu is complete without a Benedict, and Chef Bryant's version utilizes his amazing house smoked shredded lamb shoulder, topped with a chipotle hollandaise and a maple/sriracha drizzle. Interestingly, this Benedict came with a fried egg on top instead of a traditional poached egg, which gave it more of a "biscuits and gravy" feel. Still, the lamb is the focus, as it should be, and was absolutely melt in the mouth tender. 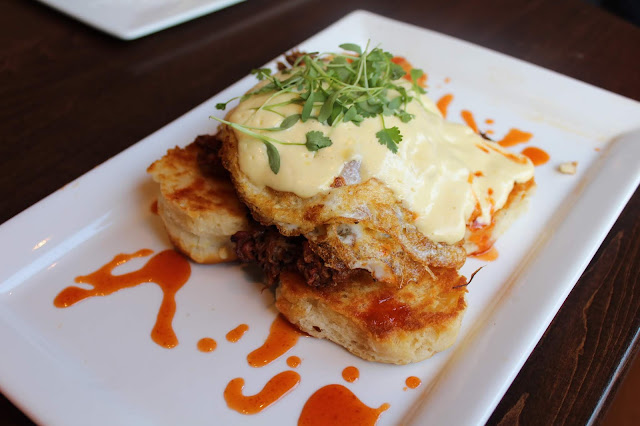 Finally, the brunch menu features one dish on the sweet side: the Croissant French Toast. The custard the croissants are dipped in actually has a bit of orange flavoring, which brightens up the naturally buttery pastry. They then smother it in a house made berry sauce (that doubles as a dipping sauce for the donut holes on their dessert menu) and top it all off with a mouth watering vanilla whipped cream. This is the perfect thing to order for the whole table to share in between bites of meatier entrees. 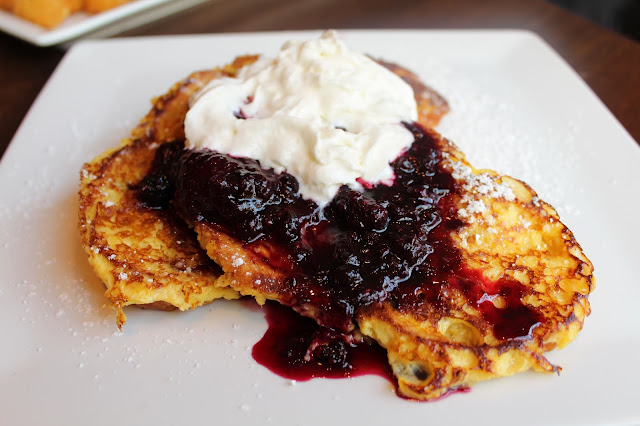 Chef Bryant doesn't seem like the kind of guy who sits still for very long, so I'm sure he will be continuously adding and perfecting the brunch dishes at Broken Barrel for the foreseeable future. After sampling his creations several times now, I cannot wait to see what he comes up with next!
Posted by Bunny and Brandy at 12:12 PM