Hi there, happy July! We're gonna try something a little different, since we're all busy people and such. Every first Friday of the month, I will be rounding up my favorite brunches from the previous month for you in one handy post. No flowery language, no in depth analysis, just quick and dirty deliciousness. So, without further ado, here's where I've been and what I've eaten in the month of June. For more on the go info, make sure you're following me on Instagram, Twitter, or Facebook. Happy brunching!

It's taken me a long time to really learn how to appreciate a good taco place. My upbringing in the Southwest left me with a lot of traumatic taco memories that involved shredded lettuce, colby jack cheese, and weirdly textured ground meat. The bright colors and eccentric art work inside Pink Taco immediately put me at ease, though. This place was obviously trying to give off a relaxed, fun-times kinda vibe, and I was digging it. It's hard to believe the space used to house one of my favorite gastro-pubs, Bull & Bear, because it now seems so much more open, sunny, and and spread out. Drinks wise, I had to order the Fro-Mosa (a frozen mimosa), which did not disappoint. The Street Corn was killer and the Ceviche Tostada was amazingly fresh. The Lobster Tacos were good, but not something I'd be craving in the weeks to come. On the other hand, the Veggie tacos, with mushrooms and caramelized onions, were so good that I considered ordering a second plate of them. I didn't, though, because the slab of carbs that was the Mexican Bread Pudding French Toast was way too enticing to allow anything even remotely healthy to take up unnecessary room in my stomach. 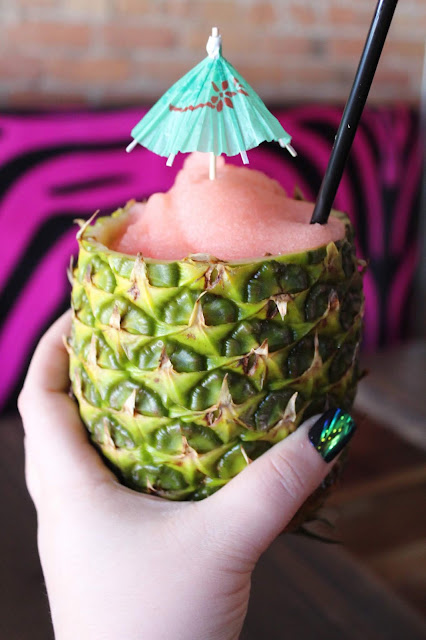 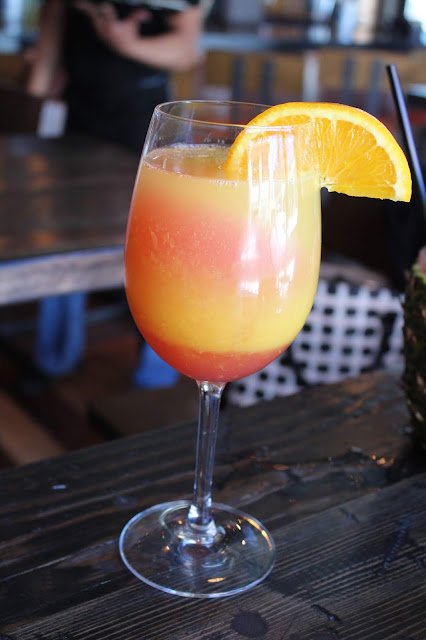 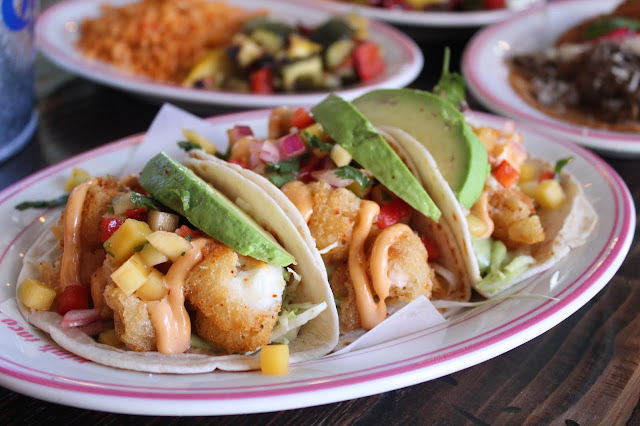 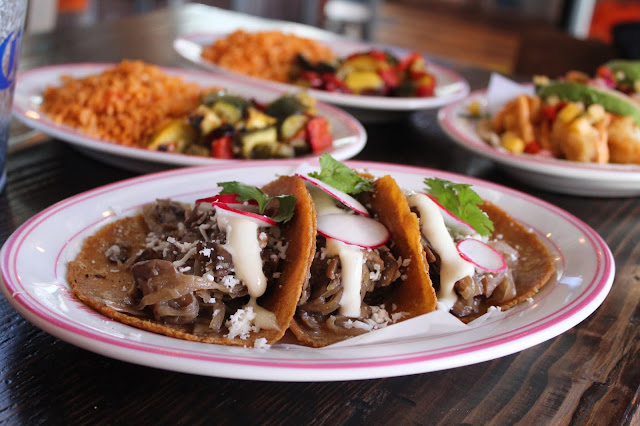 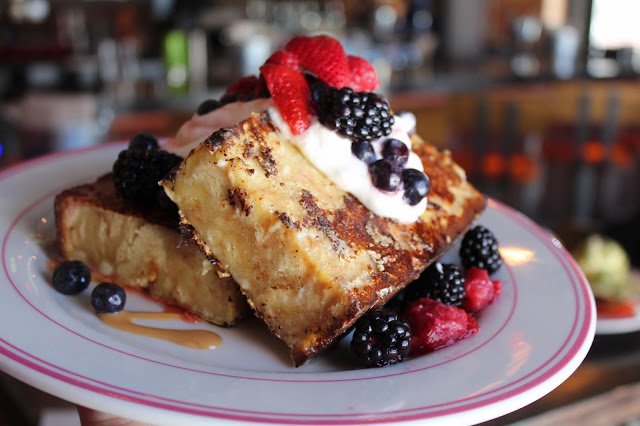 This intriguing breakfast themed concept opened in Lincoln Park not too long ago. From their cereal themed decor to their cereal themed coffees, they've definitely got a clearly identifiable brand; indulging the inner children of the hungover masses. One of their signature items is breakfast themed scoops of raw cookie dough. They have three flavors available at any given time, and they usually come adorned with a variety of fruit, cereal, and/or candy. My favorites so far have been the Just Jacked (which tasted like apple pie) and the Yabba Dabba Dough (which combines Fruity Pebbles and fresh strawberries). As far as the savory side of the menu goes, there's a lot of options for soaking up any of the previous night's residual alcohol. The Triple Double Breakfast Sandwich is a nearly unconquerable mound of meat, cheese and carbs, topped with a fried egg and bacon fat mayo. I was also a pretty big fan of their sweet and spicy Morning Colonel sandwich, which featured a nicely crispy fried chicken breast and pickles on an English muffin. But my ultimate favorite pick? The AM Fries. They've got melty Swiss cheese, they've got crispy bacon, they've got peppery hollandaise sauce; literally they've got a little bit of everything. Even 100% sober, I found these things delicious, though I would image that they are total heaven when you're fully wasted too. 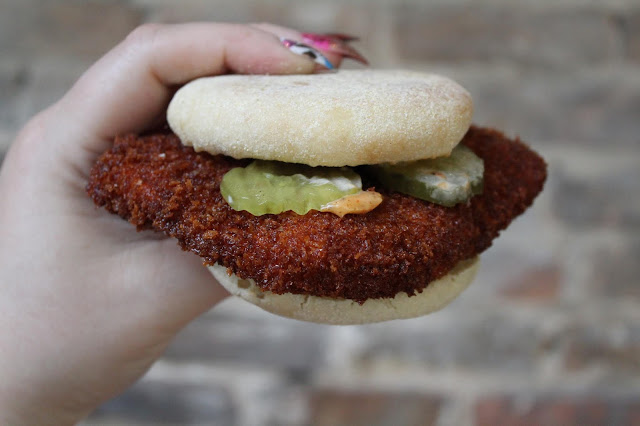 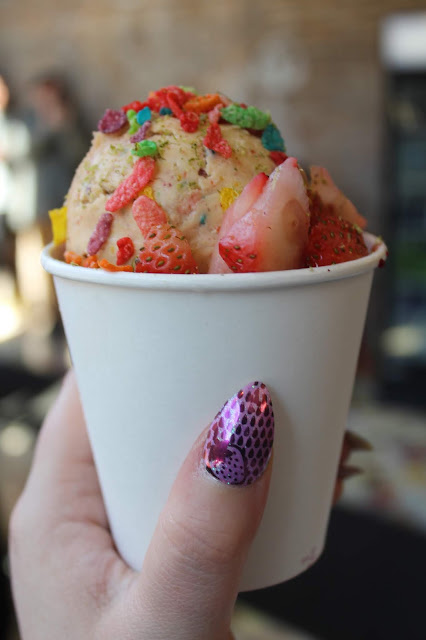 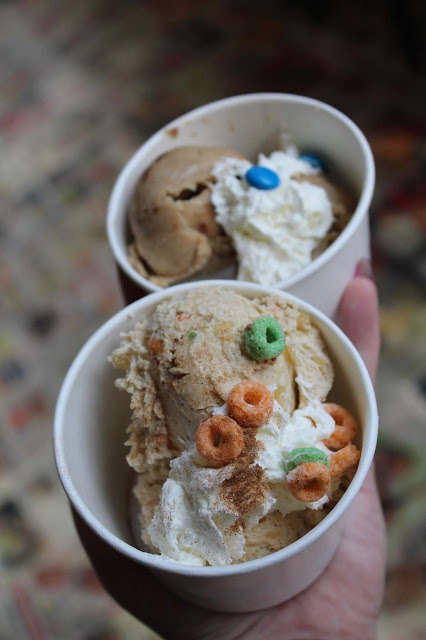 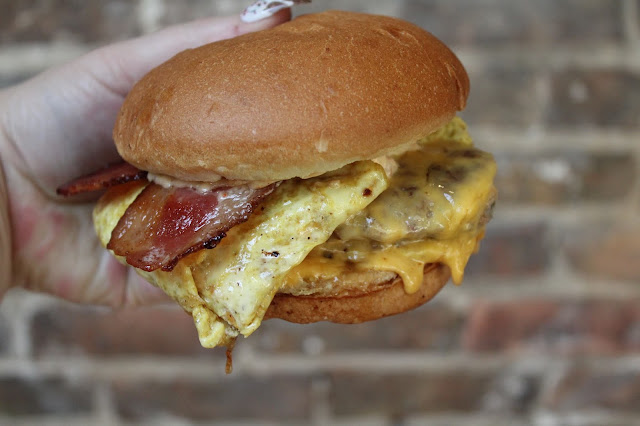 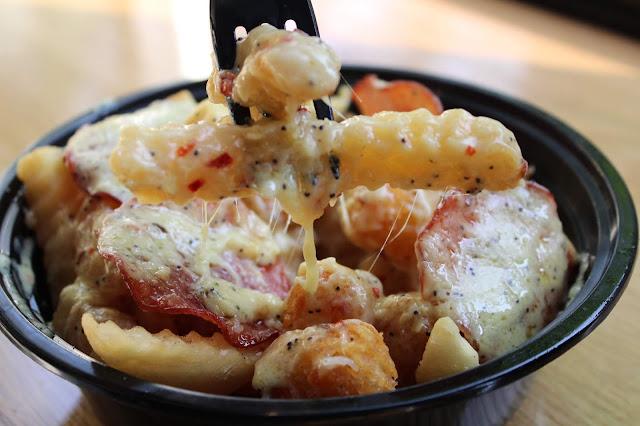 Every Sunday this summer The Dawson is hosting Camp Dawson; a sort of post-brunch-pre-dinner party on their patio, meant to evoke the joys of summer camp, but you know... with legal boozing this time. The cocktail line up is (of course) stellar, highlighted by the Bug Juices; three bottled cocktails in vivid colors meant to simulate the sugary drinks of our youth. The food menu is also on point, and is all made to be shared. The BBQ Chicken Sliders were my particular favorite, but their version of a Chicago Dog was also fantastic. The S'mores pie though... the S'mores pie... THE S'MORES PIE. Combine all of this with live music from local bands and you've got a Sunday afternoon well spent. 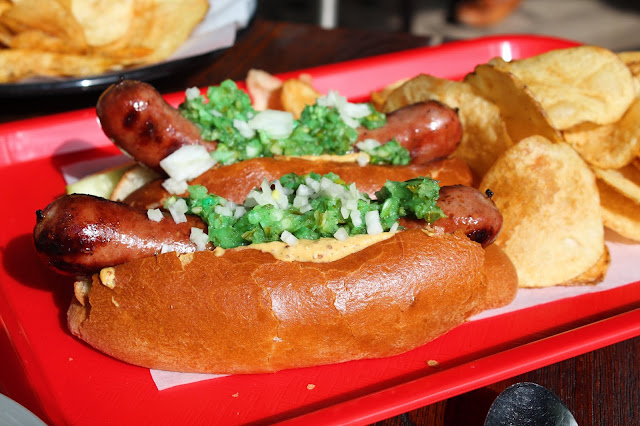 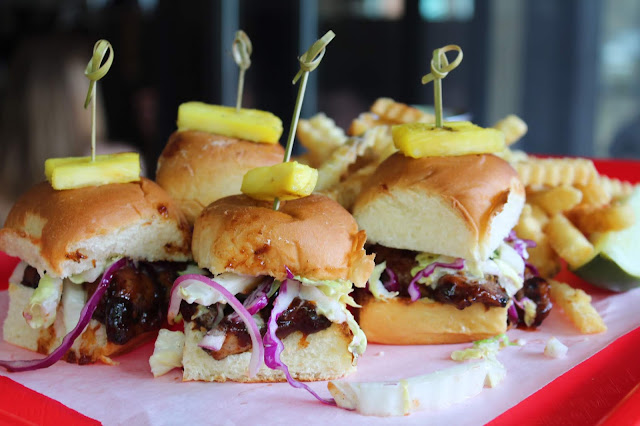 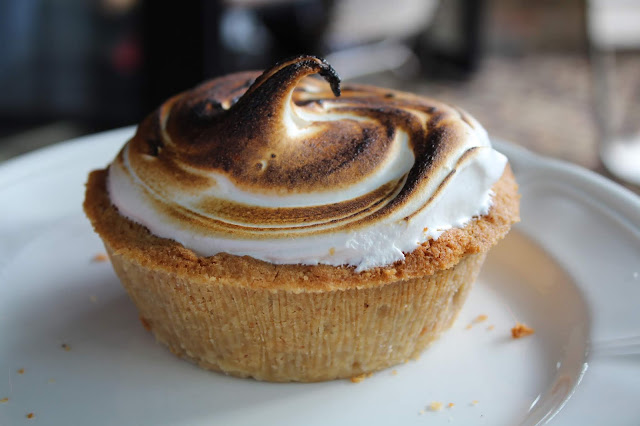 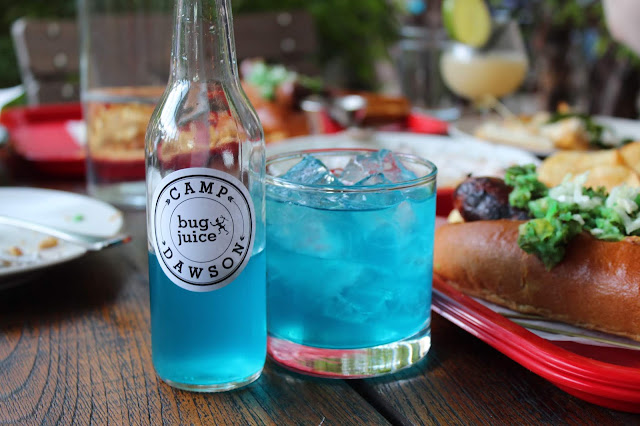 It's not often that I venture out to the suburbs for brunch these days, but when I do, it's got to be for a good reason. Rack House provided me with a very good reason in the form of a MASSIVE Bloody Mary called the BAM (Bad Ass Mary). This monstrosity not only had a liter of cocktail and two pints of domestic beer, it came topped with basically an entire buffet. Brisket and pulled pork sliders, sausage, fried shrimps, chicken wings, smoked ribs, cheeses, Nashville hot chicken, even Nutella brownies and donuts! I took one look at this thing and was instantly full. If you want to tackle the BAM yourself, seriously consider bringing an army of friends. If you're in the mood to actually walk out of the restaurant unaided, I cannot recommend their Breakfast Waffle Nachos more enthusiastically. The Hangover Cure sandwich, which gives you all the comfort of a burger, but with tender slices of brisket, was also a standout. 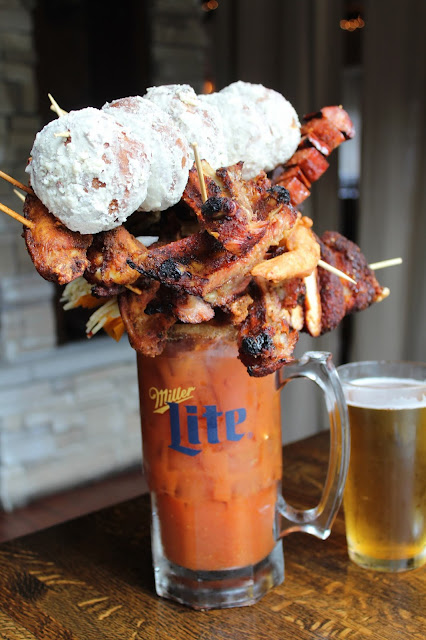 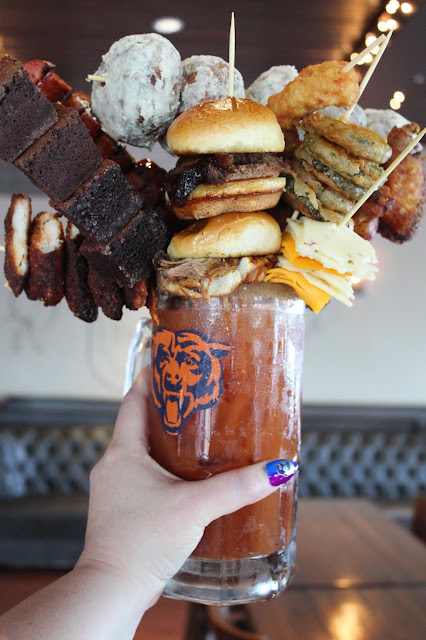 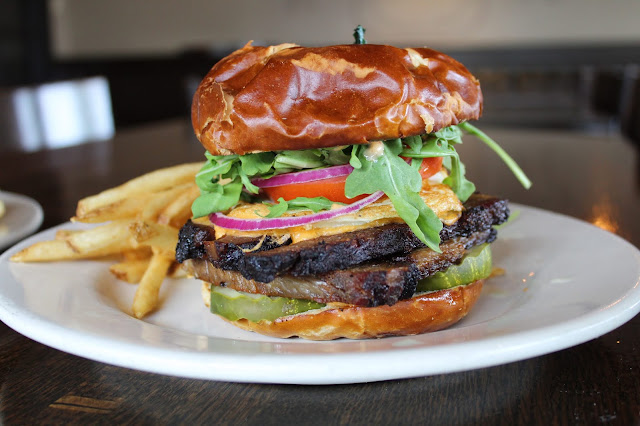 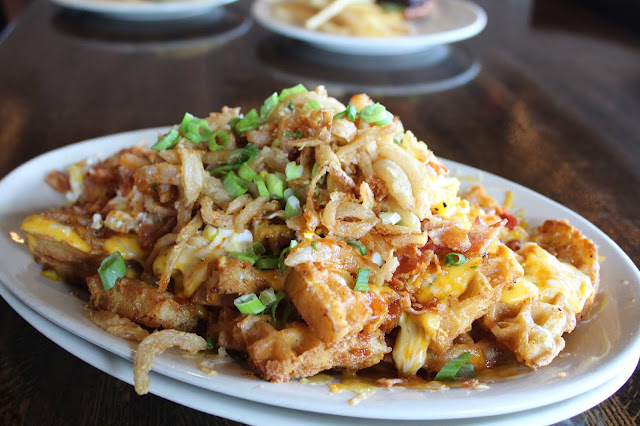 How did I never know that hidden deep within the Sheraton Grand is a fantastic little burger place with a gorgeous patio right on the river?! I'm so glad I had the chance to visit the recently revamped Chicago Burger Company for a taste of their classic diner fair and cocktails. There is just no beating the views you get as a free side dish with your meal. The River Rum punch tasted like liquid summer, the battered fries were crispy perfection, and the signature CBC Burger was everything I hoped it would be. Best part of Chicago Burger Company's River views? You can't see Trump Tower! 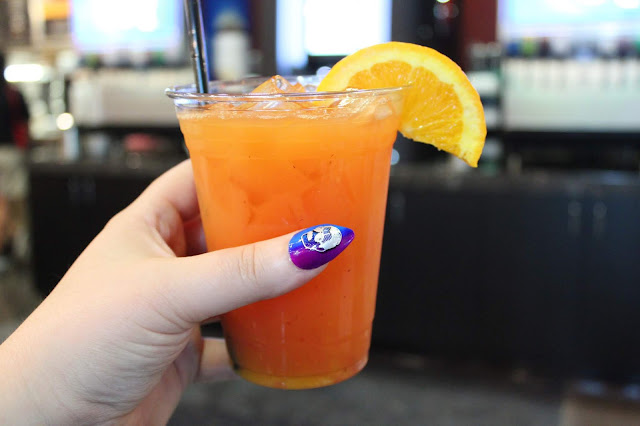 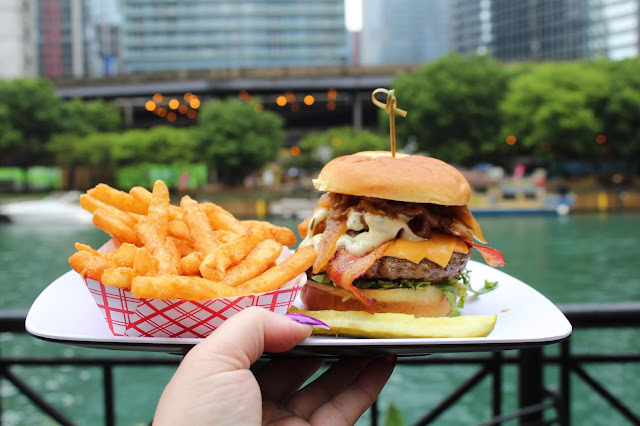 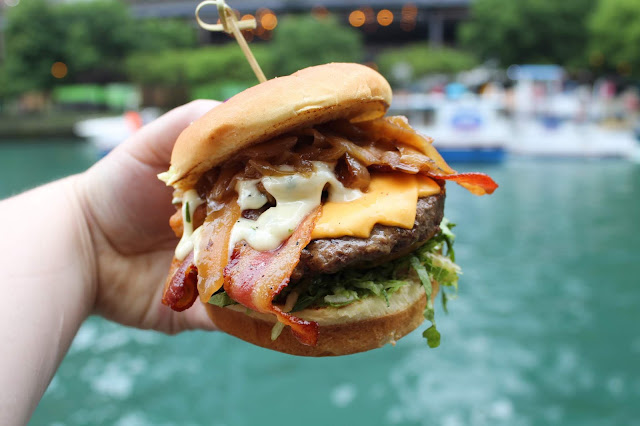 I went to dinner at this Lincoln Square favorite a few months ago and had an absolutely wonderful time, so when they announced that they were launching brunch service, I was counting the days until I could go see what they had in store. Right off the bat, I'm gonna say that this is one of the most gorgeous restaurants in Chicago. The sculptural light fixtures, the industrial bar, the dark and broody art, all of it gets my blood going. The brunch cocktails are good, but pretty much what you would expect (passion fruit mimosas and the like), so my recommendation is to go for the hardcore stuff and get yourself a Caipirinha. After that, you're going to want to order empanadas. All of them. Order every single one, even whatever the mystery one for the day is. The day I went, it was rabbit and root vegetables and I have absolutely no regrets. I also ordered an Acai bowl, admittedly so that I could appease The 'Gram with a glamour shot or it's purpley goodness, but it actually was quite nice and I would absolutely get it again if I wanted something a little lighter. The Benedict had a nice South American twist to it, coming served on grilled corn arepa's instead of English muffins. I went out of my box a little and ordered the Cazuela, which was basically roasted portobello mushroom and tomatoes with a soft boiled eggs, some béarnaise sauce, and some rustic bread, and I found it's simplicity infinitely satisfying. 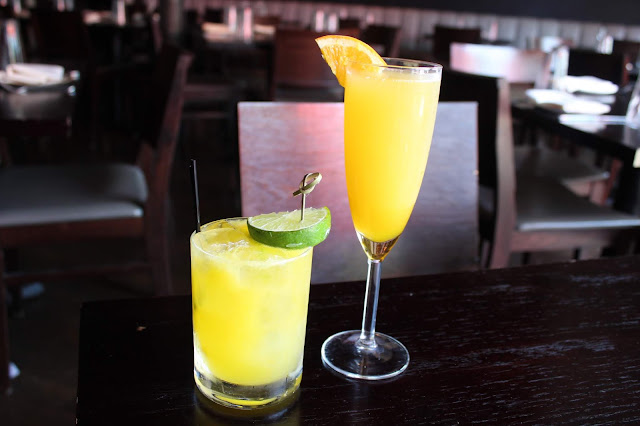 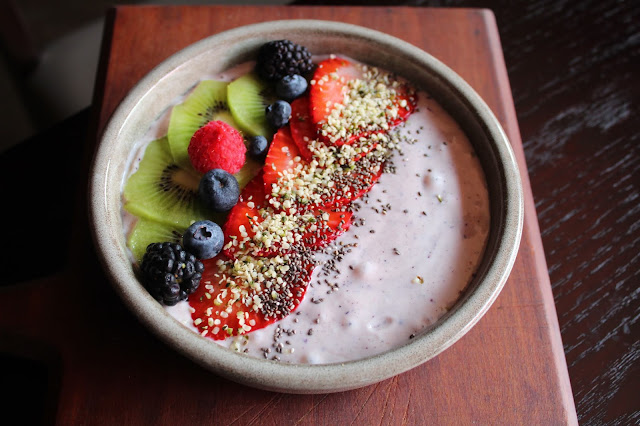 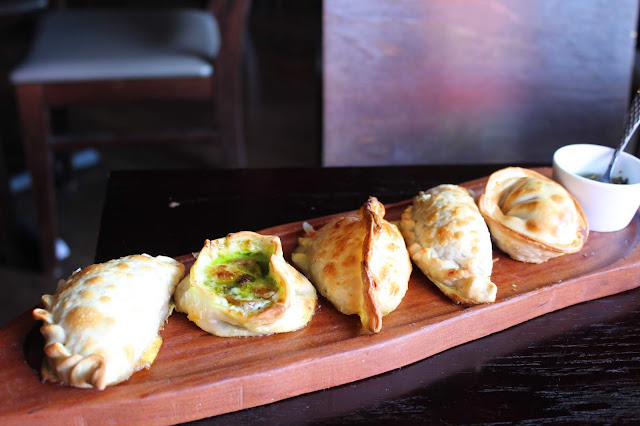 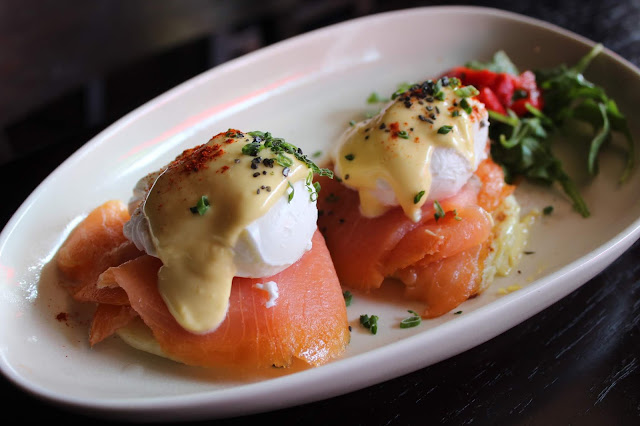 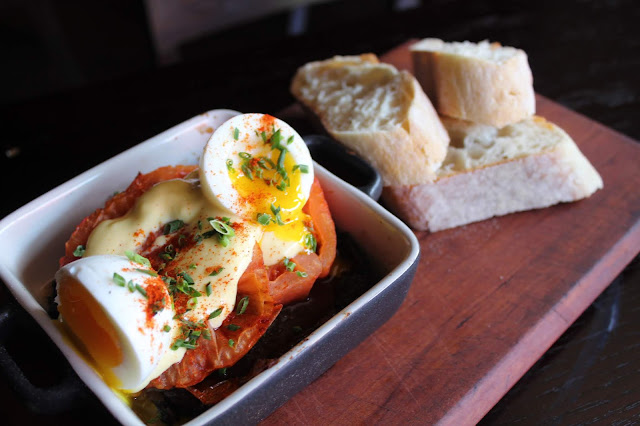 I was invited to dine free of charge at the restaurants mentioned in this post, but all opinions are my own.
Posted by Bunny and Brandy at 10:41 AM