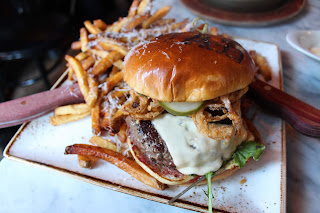 When I first started this blogging adventure 8 years ago, I remember people asking, "What happens when you run out of places to go?" That was when the Chicago restaurant industry was just beginning to explode, so running out of places to go was an actual possibility. Now, I couldn't get to all the restaurants in Chicago even if I ate out at every single meal for a year, because sadly, that explosion also means that many places close long before I can get to them.

Mad Social has been on my wishlist since the day it opened. The flurry of whimsical, indulgent brunch dishes they premiered with immediately caught my attention, but my dance card was already so booked out that I just never could find a time to go visit them. That time finally arrived last weekend when Starr (who had also been dying to visit Mad Social, but hadn't been able to yet) and I headed to the West Loop, hungry and in need of a few cocktails. 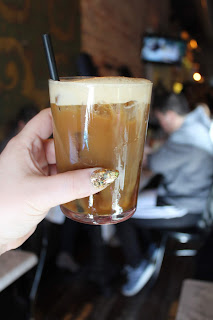 Mad Social was already packed by the time we arrived, attesting to the loyal following it has built over the almost three years it's been open. The decor had a sort of inoffensive industrial feel, with heavy wood furnishings, exposed brick, Edison-esque light bulbs in mason jars, and coat hooks sticking out of the walls (which is actually a pretty clever design touch). Cozy, yet not stifling.

We both started off with a coffee cocktail called the Strange Brew, which consisted of cold brew, walnut bitters, bourbon, and a few other magical ingredients.  I thought it was a nice change of pace from the more expected options (mimosas and bloody mary's), but it was a bit too heavy on the bourbon flavor for Starr's delicate palate.

We split up our meal into two parts.

Part 1: The Short Rib Benedict and the Havarti Mac and Cheese. I cannot say enough good things about the mac and cheese. Not because it was particularly special or mind blowing, but because it contained all of my favorite things: pasta, cheese, corn, mushrooms, crispy brussels sprouts, and a crap ton of calories. The sauce was nice and creamy, though not super cheesy, and I loved the adventure of discovering which delicious nugget each forkful would pick up. In fact, I may have encouraged Starr to take more pictures of the benedict than was necessary as to distract her while I gobbled up half the skillet. As for the benedict, it was definitely one of the most original takes on the dish I've seen in quite a while. Succulent chunks of braised short rib and brussels sprout "kimchi" topped toasted pretzel buns and were slathered in a togarashi spiced hollandaise, making some sort of delicious American/French/Korean/Japanese hybrid creature. The vinegar element from the pickled veggies was a little strong, but actually worked rather well with the rich hollandaise, and I very much liked not having to saw through yet another overly toasted English muffin. 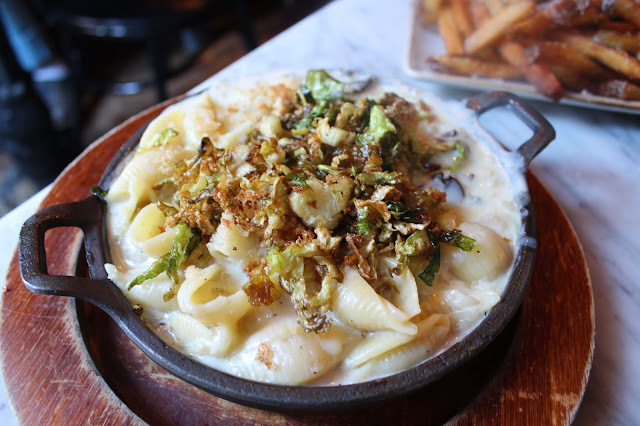 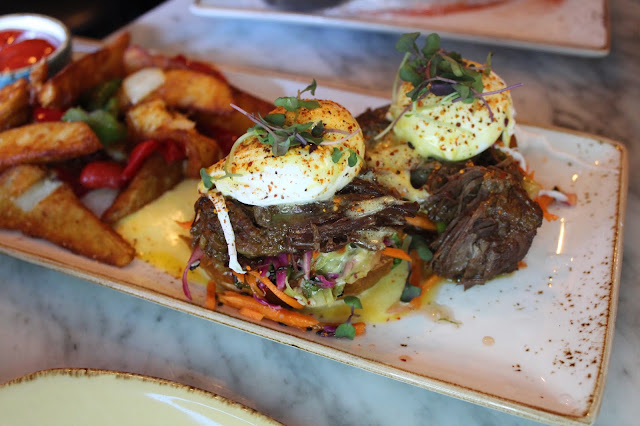 Part 2: The Mad Burger and the Chicken and Waffles. Two things struck me about the burger when it was brought to the table; first was the scent of truffle oil from the fries, which Starr and I were already grabbing off the plate, and second was the "MAD" branding on the top of the bun. And not "branding" in the marketing sense. The bun was LITERALLY branded, as in, with a hot iron. Pointless in the context of flavor, but a fun visual touch, none the less. The burger itself was pretty hefty and had been adorned with a mountain of crispy onions, pickles, melted chihuahua cheese, and a thin slice of pork belly. Oddly, the house made pickles were the strongest flavor, so I could have done with a few less on the burger, but all together, it was a pretty nice flavor and texture combo. The chicken and waffles was a downright show stopper. The entire waffle had been deep fried (they refer to it as a "churro waffle") and came topped with a giant slab of panko encrusted chicken breast and another small piece of pork belly. While I liked the touch of smokiness the pork belly added, I really could have done without it, as the chicken and waffle were already such strong elements. The waffle had a unique crisp texture that matched with the juicy chicken and it's crunchy coating, and a good dousing in maple syrup gave the whole thing the perfect balance of sweet and savory. It's my understanding that they also use these churro waffles to make ice cream sandwiches, which I'm sure is absolutely incredible. 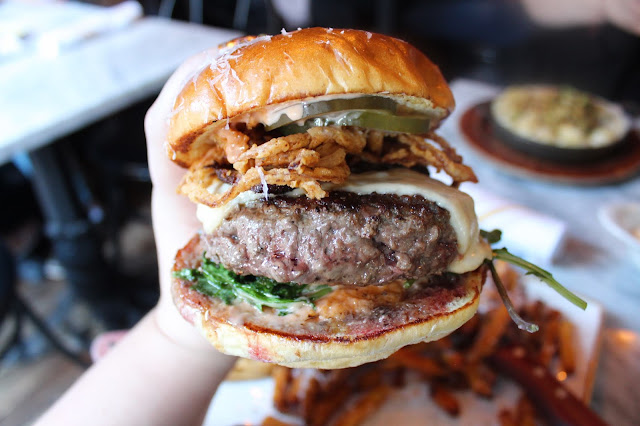 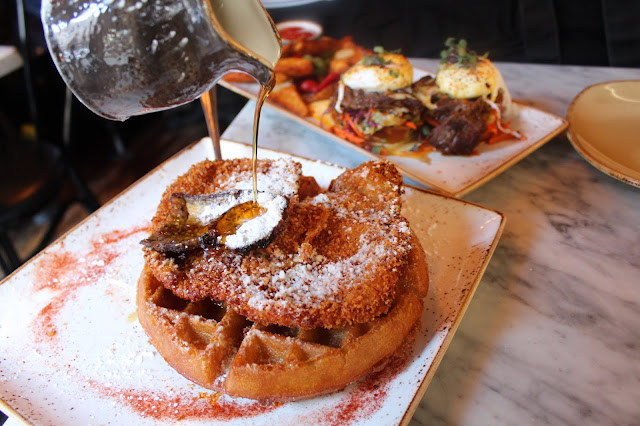 So all in all, I was happy to have finally ticked Mad Social off my list. The food was good, the service perfect, and the atmosphere fun and lively without being obnoxious. I was sad to see that some of the dishes they'd blasted across social media early on had fallen off the menu (they had a decedent looking Monte Cristo sandwich once upon a time that I had been hoping to try), but what is still there is solid and well balanced with lots of international flair to make things exciting and original. I will definitely going back for one of those churro waffle and gelato sandwiches.
Posted by Bunny and Brandy at 12:35 PM