Papa Ray's or It's No Game 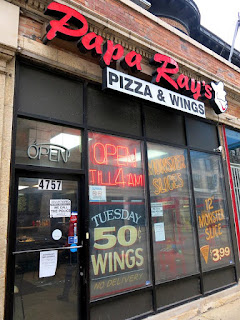 "The holidays can wait," said Hawk with a steely timber in his voice. "Winter weekends are for football and not much else, as far as I'm concerned." Brandy took this in. When he had first called saying he needed help picking something out, she had assumed he meant a present for his dear wife, Bailey. "No, no. I need help picking up some food for the game this Sunday!" he had laughed. "I just thought you'd be the perfect person to ask about where to go." "I deal in a lot of things, but game day food isn't usually one of them," Brandy responded, perplexed. "Have you thought about some wings or pizza or that sort of thing?" "Of course, but I don't just want any old pizza and wings. I want the best possible, because if my team starts losing, well... then at least I'll be eating something delicious." 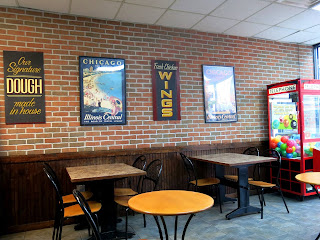 Brandy put some thought and research into this unusual brunch request before landing on a home grown franchise called Papa Ray's, which has several locations throughout Chicago, all of which abide by the same tenants of making everything, from the dough to the sauce, in house and as fresh as possible. Stopping into the little store front in Uptown, Brandy and Hawk were greeted warmly by a couple of gentlemen behind the counter. Though the location does most of its business through delivery, an effort had been made to give those coming in for a quick slice a nice, warm place to sit down for a moment or two that resembled the neighborhood pizzerias of old. "Oh wow," Hawk exclaimed, looking at the menu, "I hadn't expected so many choices. I'm not sure what we should get." "Well, there's only one thing for it," said Brandy, "We better try a little bit of everything,"

Hawk's preliminary test was the wings, of which he ordered two different kinds: traditional wings with garlic and parmesan, and boneless wings with the house BBQ sauce. Both had a really great crisp exterior that didn't overtake the juicy chicken meat within. There was also quite a bit of meat to be had, even on the traditional wings, and the fact that they had never been frozen meant that the meat was succulent and supple. Hawk really liked that the garlic and parmesan wasn't too over powering a flavor, while Brandy very much enjoyed the BBQ sauce, which favored a more tangy vinegar flavor rather than an overly sweet one. 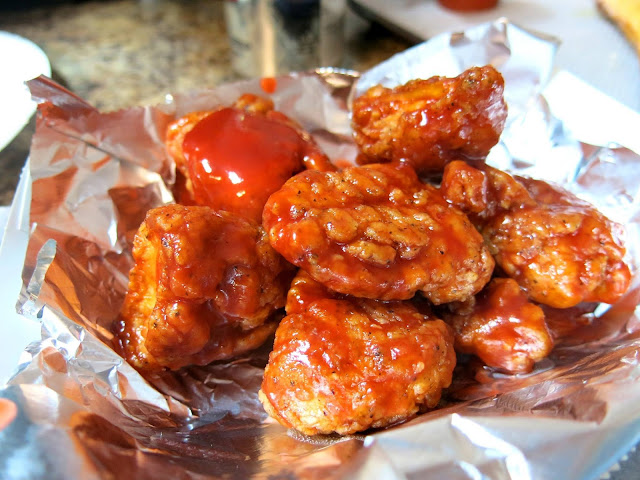 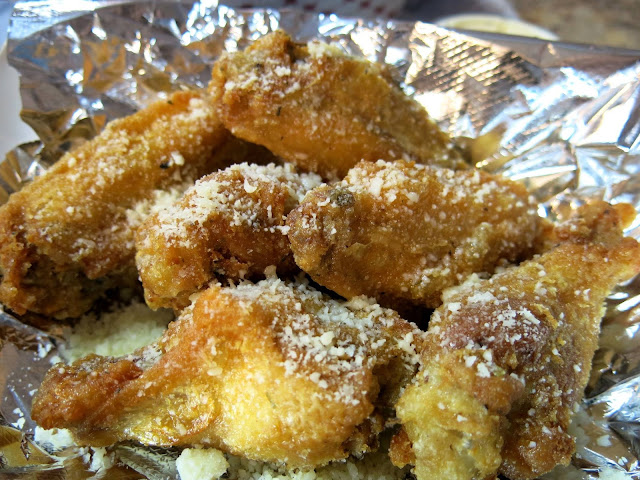 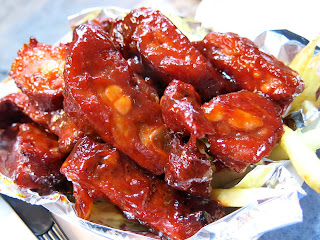 Speaking of the BBQ sauce, Brandy had also requested an order of the Rib Tips, which came slathered in the red stuff and served over a bed of fries. This was really where the sauce shown brightly, lending a tiny bit of heat to the tender rib tips, which again were generously meaty. The fries were a surprise as well, being more than just filler, they held their own, keeping crisp even under the weight of all the sauce. "Now this is some game day type food that one wouldn't normally think of, am I right?" said Brandy. "Pizza and wings are all well and good, but if you were to lay out a platter of these little darlings for your fellow fanatics to snack on, I think they'd be pretty pleased. There's nothing like ripping into some real meat while one grits their teeth during a decisive play." 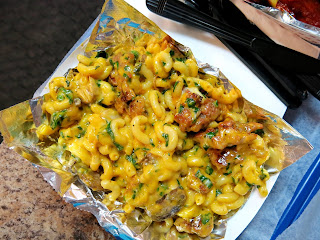 Next, Hawk and Brandy moved on to the signature Mac and Cheese, which they customized with a bit of sausage, mushrooms, and spinach. Brandy was positively delighted with this pan of ooey gooey cheesy goodness. Unlike a lot of pizzeria mac and cheeses, this one actually had a strong cheesy flavor. Rather than being coated in a creamier sauce that can feel more indulgent than it tastes, this was a sharp, melty cheddar that clung to everything, from the pasta to the fork to the plate. "My goodness, I certainly wasn't expecting to enjoy this as much as I am," said Brandy. Hawk repeatedly stabbed at the large chucks of sausage scattered throughout, saying he very much enjoyed how the bits of meat and veg ensured that every bite was its own mini adventure. 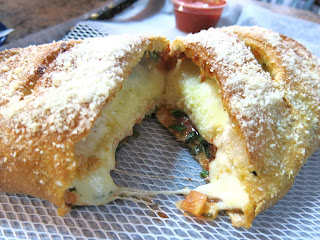 Finally, Hawk and Brandy decided to split a massive calzone, which had been filled with fresh tomatoes, spinach, garlic, and basil and served with a side of the house pizza sauce. Yet again, Brandy was pleasantly surprised by this pizzaria staple, most because of its impossible buttery and light crust. "Normally when I think of a calzone, I imagine a thick, doughy crust, but this! This is almost like a pastry crust! How delicious!" Of course, the monster had plenty of melty cheese inside, but the freshness of the basil and tomatoes really balanced things out and kept it from being just a mouthful of carbs and dairy. "Wait, how is this thing less than $10?" Hawk exclaimed. "This is easily enough to feed two people! With a couple of these at the tailgating party, no one's going to care how bad the game's going!" 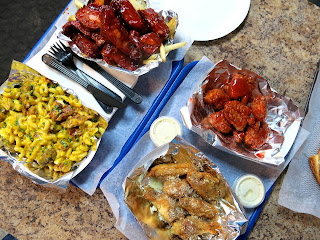 And so, laden down with bags and boxes of goodies, Hawk and Brandy headed out of Papa Ray's, ready to set up the most epic football watch party outside of the Super Bowl. "I still can't believe how good their prices are," said Hawk. "I can't believe how fresh and delicious their food was!" Brandy replied. "Wait, you didn't know in advance that this place was going to be that good?" Hawk asked, stopping in his tracks. "One can only do so much preliminary work," said Brandy, "The truest test is always done in person with taste-buds armed and ready to go." 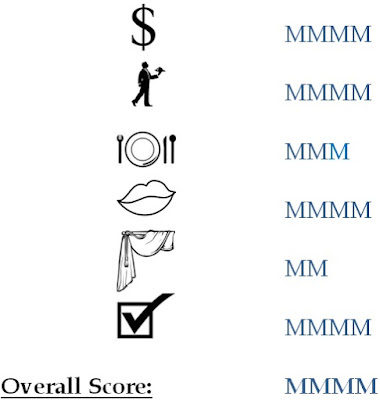